My first visit here was at their “opening night for bloggers” back in Oct 2009.

I remembered enjoying the salted egg plants chips and the ribs. But someone ordered the burger & said it was mediocre. Well, I’m glad to say it’s much better NOW !

Anyhow, months later, I’m glad to be back & to see the crowd growing strong. Admittedly I didn’t think it would have lasted this long.

Then we sat down with Ben, the marketing whiz of Craft Brews, & as the night progressed, I could see why. Ben blew me away with his wealth of knowledge in beers, his passion in his job as well as his affability towards his customers.

Indeed admirable, for one do realised, if there is no passion in what you do, nothing worthy will materialise.

Both of us (me & UnkaLeong) enjoyed the session immensely; & I learnt so much. Dear Hsu Jen provided charming company. Thanks so much gal, for the invite!

Oh, by the way..this place is dog – friendly too! 😉 Dogs lovers rejoice!

Now, I give you the CRAFT BEERS review below by UnkaLeong.

Becks invited me to a food and beer tasting at Craft Brews last week. She said that she’d taste the food and I could review the beer. Beer..I ain’t gonna argue with that 😛

Craft Brews is a relatively new outlet located in Mutiara Damansara. Given the fact that I use the Penchala Link to get home nowadays, this could be pretty much a place I could drop by when I need a pick me up after work 😀

Ben started us off with a sampling of the outlets Signature Home Brews. Namely the English Ale, Weizen, Monster Green Lager, and Czech Pilsner. 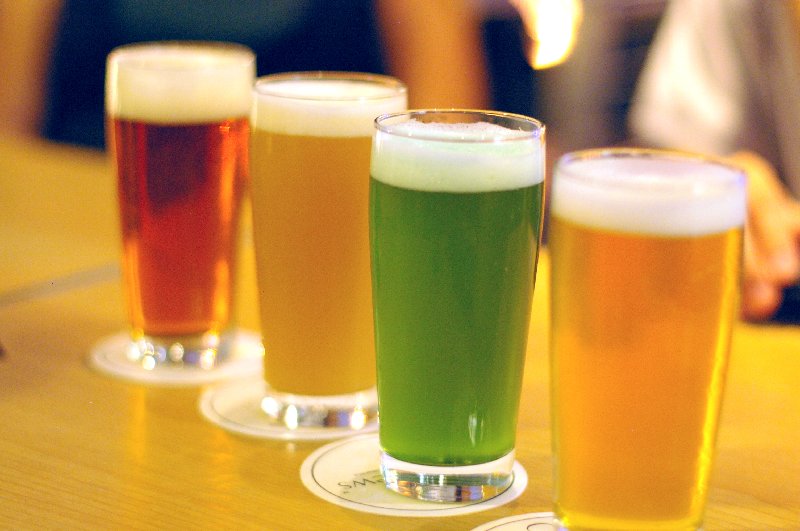 The English Ale. I like my beer dark and this beer was my favourite of the night. With a hint of bitter aftertaste, smoky and not as fizzy as your normal beer. This went down really well with me. I could imagine myself chugging down a pint or 3 of these in a flash.

Monster Green Lager. Spirulina that is added into the beer during the brewing process gives this beer it’s distinctive and dare I say novel green colour. It’s got a refrshingly green taste. No, not the grassy kind of green, more of a fresh morning dew on the grass kind of green taste to it. And c’mon, it’s brewed with spirulina, it’s got to be good for you. I can see this going down very well with the ladies 🙂

Czech Pilsner. Definitely not your normal Carlsberg Pilsner (though it’s brewed using the same yeast). It’s got more kick to it, which according to Ben is because of the malt that is used to brew it.

Weizen. Also known as the wheat beer, it tasted relatively fruity to me. Which could be a potentialy dangerous addiction as it goes down really easy, since it’s so refreshing. 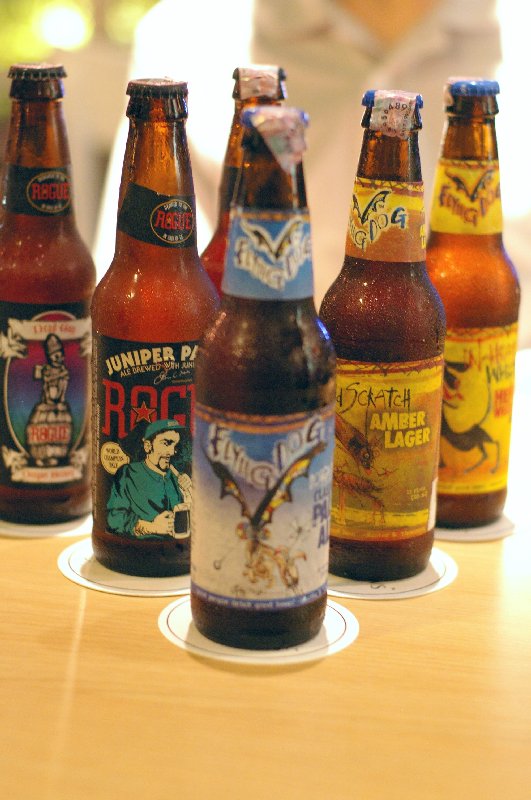 Now I’m quite sure we’ve all heard of wine pairing with foods before, but who would’ve thought that beers could be paired with foods as well. We got to sample two bottled beers, the Juniper Pale Ale and the “Old Scratch” Amber Lager. There are cute icons on the menu that recommends which type of food goes well with the bottled beers. Both these beers go well with barbecued meats of any kind.

According to the menu, Old Scratch also goes well with beef, which I find it hard to argue with as it had a bold, malty after taste to it…It also had hint of sweet after taste as it glided down my throat.

The menu recommends pairing Juniper Pale Ale with chicken.If I may be so bold, I’d say this beer is tasty. I quite like this beer as well, it has a zingy taste and went down nicely dry and bitter.

Thanks again to Hsu Jen & Ben for all the porky-licious food & craft beers !

Next, more on Microbreweries & What is Craft Beers?