As my Chinese New Year’s gastronomic escapade continues, I discovered more unique and blog-worthy offerings from restaurants just as I got more and more awed by the originality and inventiveness mind of the chefs I met.

As the average diner in Malaysia grew more discerning and as more dining outlets jostle for the cash and attention of the people, both value and quality as well as creativity comes into play. Chef Ang and Chef Chew seems to have all the prerequisite ingredients in hand with their 2012 Chinese New Year offerings and other than the usual 8 course feast, there’s an option for a buffet during the Chinese New Year period. 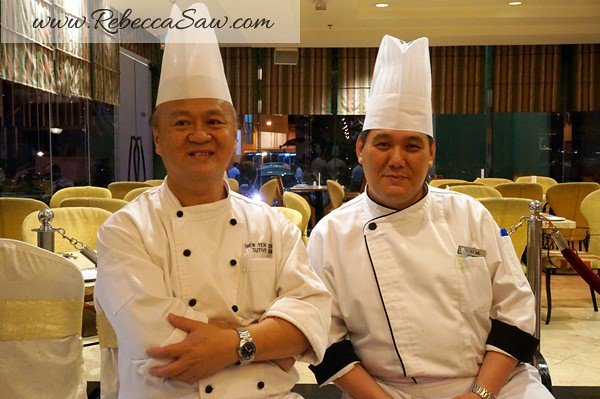 In line with the long heritage and tradition by the Chinese culture, the Lunar New Year is always welcomed by preparing the ‘annual ritual’ of the reunion dinner.

The reunion dinner is where family or relatives from near and far come to dine together as one in the spirit of togetherness. During this time, must-have individual dishes that symbolize auspicious meanings will be served, such as; Fish (surplus), Sea Cucumber (happiness), Lotus Root (togetherness), Black Moss or Fatt Choy (wealth), and Whole Chicken (completeness) to complete this glorious feast.

Most of the time, it’s a sit down affair. But for this year, why not consider a buffet that offers variety, quality, value for money and of course, the promise of absolutely no clean up sessions afterwards? The buffet as shown below (grab the Gourpon voucher while you can!) promises Chef’s specialties of roasted duck, baked salted chicken, braised lamb and more; satisfying the elderly with classic Chinese New Year dishes that provoke nostalgia and sentiment and keeping the young and hip happy with modern renditions of lamb & Japanese fare such as Smoked Salmon Ravioli in Creamy Nage, Fillet De Boeuf with Peppercorn Sauce, Roasted Duck Roulade with Kumquat Sauce, Teriyaki Snow Fish, Kaki-Age, Donburi and Teppanyaki Fish.
All priced at 70.00 ++ per person. What a steal! :DD 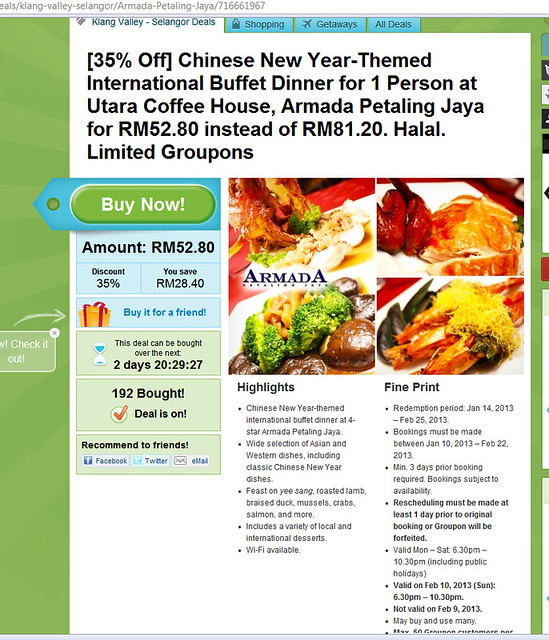 While its understandable that you have your reservations about such buffets, especially on the taste and quality, I would like to lay your fears to rest. Obviously can’t promise you that the spread is going to rock your socks the way your granny’s dishes would, but rest assured it would be at least value for money!

I had dined at Utara Coffee House numerous times and I do have great respect for Chef Chew. No doubt Armada Hotel is not quite a name that sprung to mind when it comes to dining options but I have mentioned countless times in my previous blogposts that Armada Utara Coffee House serves superb Hainanese dishes, offers a fabulous value for money Ramadan spread, great tea time and dinner buffet. People should come here to dine more often, really!
The food is creative yet edible, unlike some places that goes overboard with novelty offerings but doesn’t taste half as good. 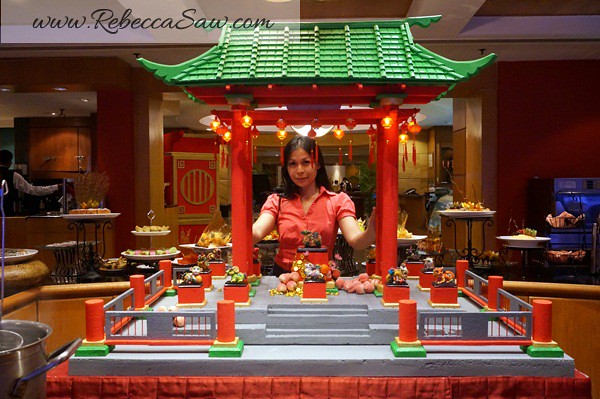 Prosperity Yee Sang with Abalone & Salmon in Mango Tangy Sauce was a promising prelude to the evening. In addition to the well prepared ingredients, I adored the tangy mango sauce that’s so refreshingly fruity and how the tang perks up the palate immediately. Too bad the accompanying sauce was not exactly enough to coat the generous portion, so I told the chef to add additional sauce so the mild sauce would be sufficient to coat the entire platter of Yee Sang. 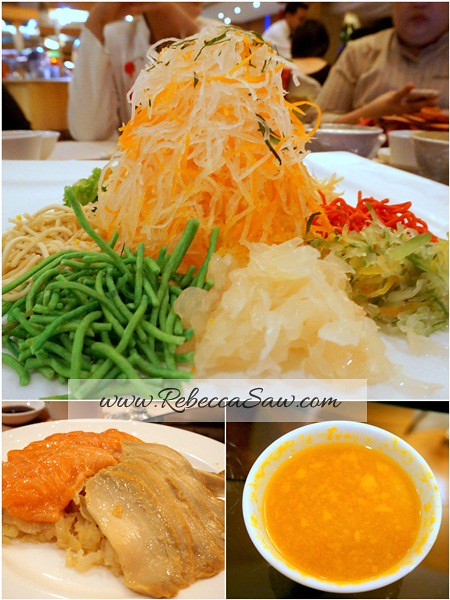 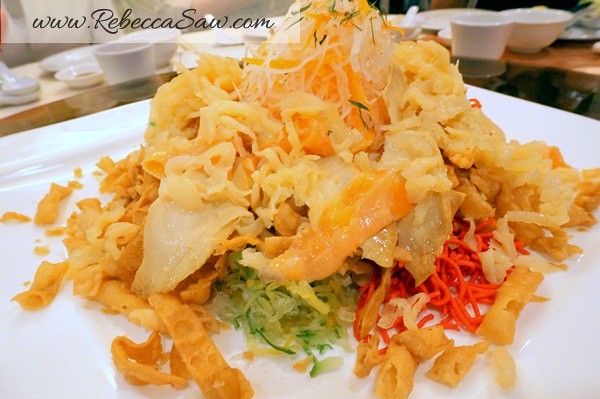 There is another variety of Yee Sang offered by Utara Coffee House that you might want to keep a lookout for; The Hokkaido Yee Sang. This Hokkaido Yee Sang, befitting of it’s name, is uniquely Japanese. You can expect loads of seaweed, Idako (baby octopus), Hotate (scallops) and Kurage (jelly fish) in this platter, which is as Japanese as it gets. The usual crackers that’s used for crunch is absent, but crushed tempura batter and deep-fried Salmon Skin makes a better substitute regardless. A mix of sesame and peanuts is added in for a good roast-y nutty aftertaste. 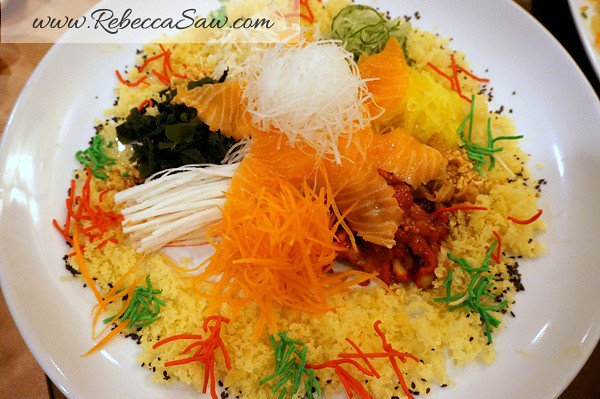 The accompanying special wafu sauce was lovely, and though wafu dressing is common in Japanese salads, it’s not usually paired with Yee Sang which is quintessentially Chinese. But then again, Japanese are Asian too, no? 🙂 I’ll opt for something different anytime. I recommend this as it is not only different, but makes a good table diversion too! 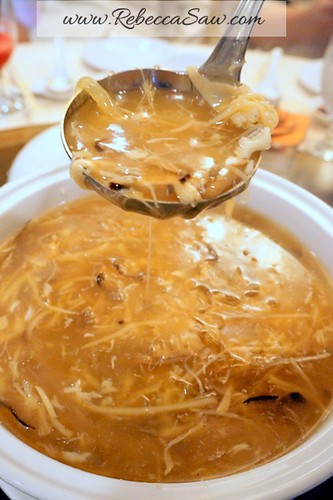 The one dish that made me sat up during the preview was the Braised Duck with Black Mushroom. The duck was braised whole with all ingredients stuffed inside for 3 whole hours. The result was fabulous. 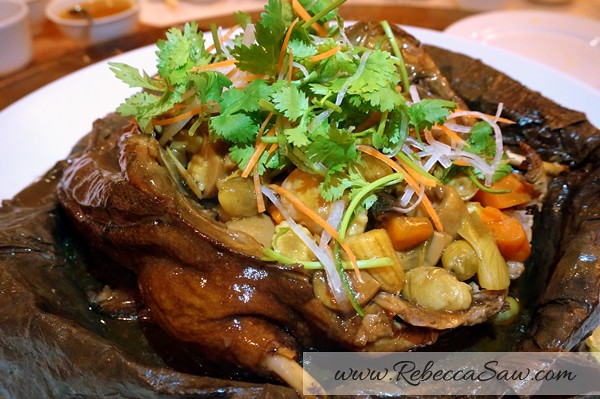 The stuffing of ginkgo nuts, mushrooms, carrots, lychees and young corns infused with the duck’s flavour nicely. I like this preparation above the usual roast and boiled kind. A bite of it bought me down the memory lane to revisit the nostalgic memories of the yesteryears, where food was prepared slowly and for long hours to extract its flavours. Be forewarned though that the duck meat on its own was rather plain after the long process. 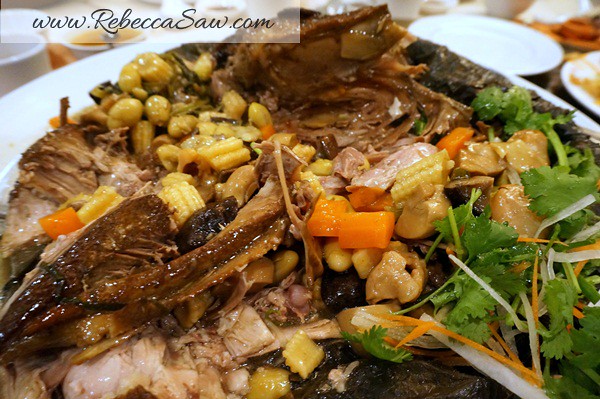 Another dish that’s aimed to impress the crowd is the Steamed Pomfret in Abalone Sauce. The melodramatic presentation saw the fish appeared to be ‘flying’ or suspended in the air. I was taken aback for awhile, wondering how could a fleshy and heavy fish be suspended that way steadily, but really, the display of the “flying” fish is merely the structure or the “bones” of the fish that has been fried. The fish flesh was already taken off and prepared separately before its plated again. 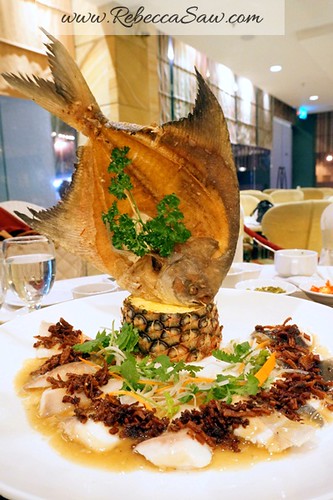 I love promfrets and this was no exception. The flesh of the fish was flaky and naturally sweet. Topped with dried shrimps, dried scallop, dried chicken meat and deep fried crab sticks, each fillet was steamed in abalone sauce; infusing more flavour to the fish. 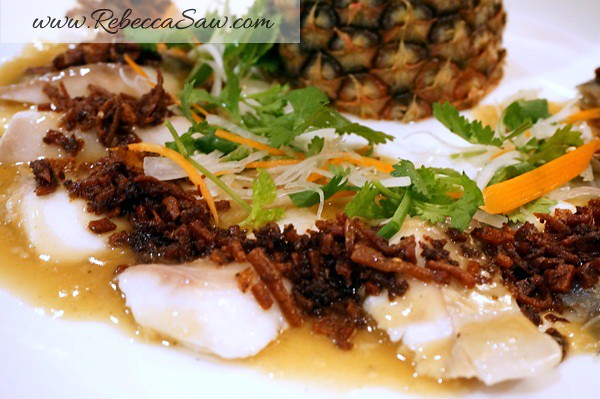 Two Variety of Prawns was uniquely presented in a noodle basket. As the name suggested, there prawns were cooked 2 ways in this dish. One was fried, while another was boiled. I prefer the boiled one as it bouncy & sweet, especially when paired with kiwi, strawberry and honeydew slices. The fruity taste gives the bouncy prawn an extra zing and tanginess. The fried variety of the prawn were buttered prawns which was nice but plainly ordinary. 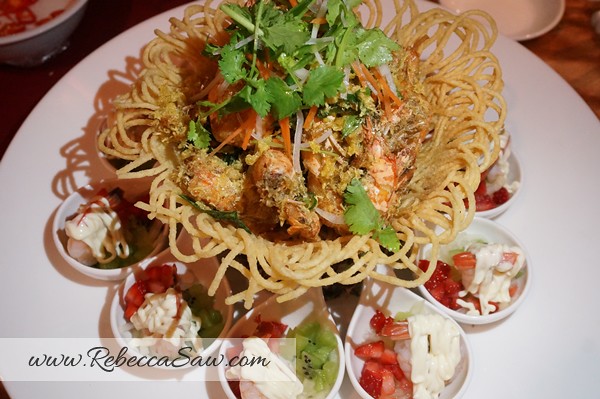 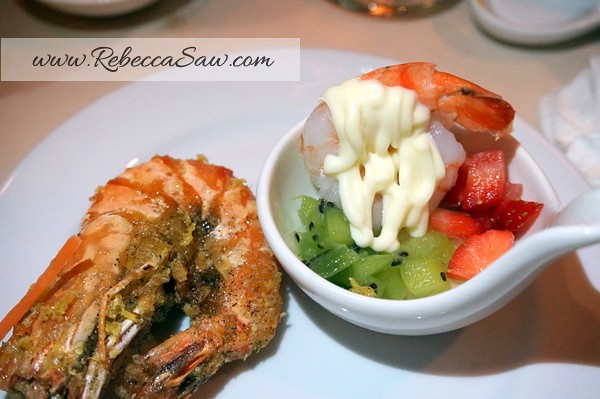 I was really enjoying my meal until the Yam Ring arrived at the table for our gastronomical inspection. A careless kitchen malfunction yielded a yam basket that was heavy on salt. Not a problem though as the chef has been duly informed, and I’m more than sure that such calamity will not happen again anytime soon. 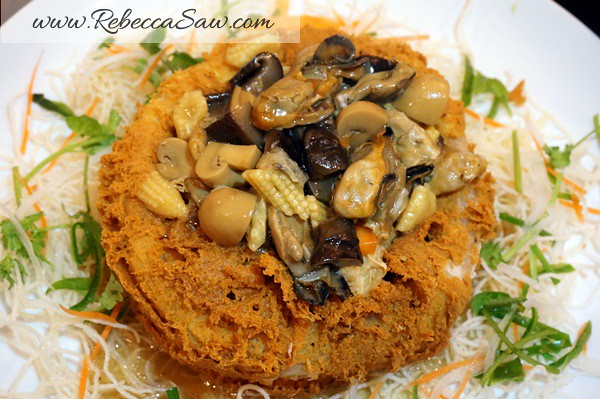 While the yam ring was salty, the Steam Glutinous Rice in Lotus Leaf was ironically bland. Whatever additional salt that was used for the yam ring should have gone into the bland lotus rice. There was no skimping on the ingredients though. The glutinous rice was laden with black mushrooms, chicken ham , dried shrimp as well as diced chicken meat. 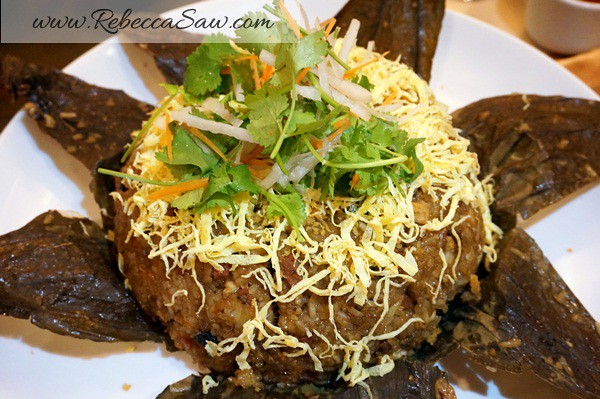 Dessert was quite an adorable affair. The young and the young at hearts alike will definitely be tickled to see the pau and cutely shaped Ping Pei Mini Dessert. The snow skinned mooncake-like dessert was delicately shaped like a goldfish and was filled with red bean paste inside. I like the presentation of both pau and mini ping pei, but I heard someone at the table complaining that the pau was abit hard. Well, to be fair, I’d say that I have no idea if the pau was a tad too hard and unpleasant to eat, cos I was too busy devouring the cute fish! 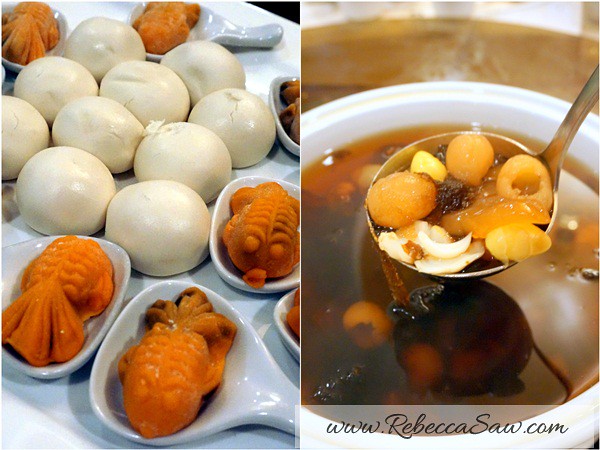 Last but not least, the traditional Sweet Longan Dessert was a cooling thirst quencher.

From 7thJanuary till 25thFebruary 2013, Utara Coffee House at Armada Hotel will be offering a daily Chinese New Year themed buffet. On the reunion night itself, there will be Phoon Choi (yes, that heavenly pot of goodies!) which is refillable throughout the night. Guests would also be treated to a “Make Your Own Yee Sang” affair, where you can select your yee sang ingredients for your dinner. All for RM70++! 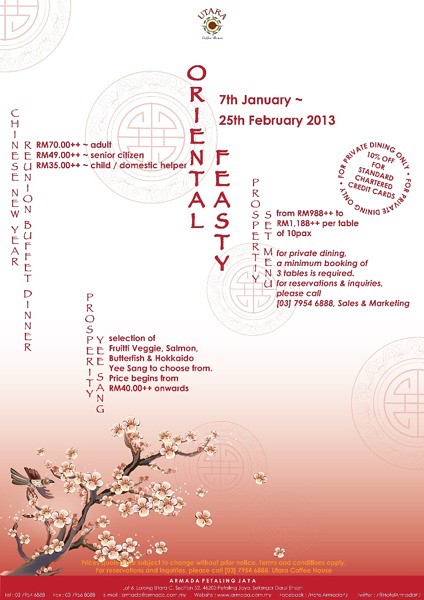 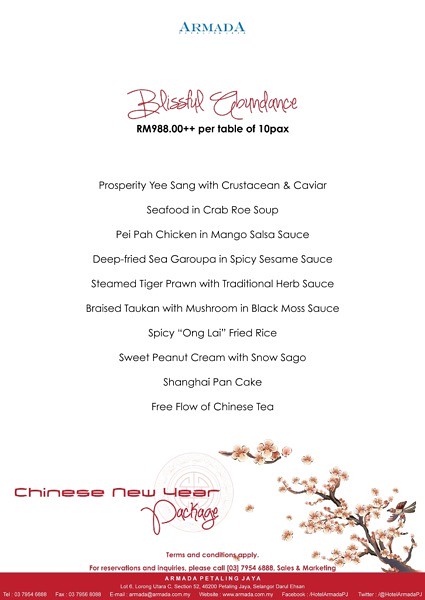 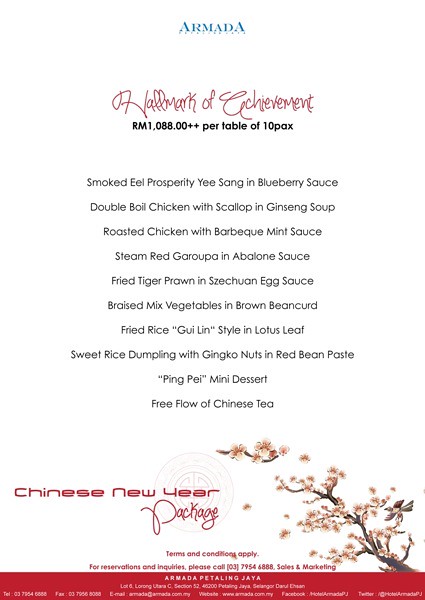 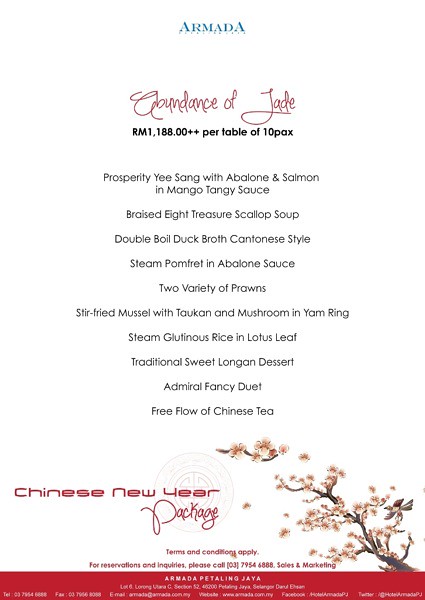