LONDON, 31 March 2011 – The Commander of the Order of the British Empire (CBE) award will serve to further facilitate the promotion of commercial and cultural ties between the United Kingdom and Malaysia, says Dato’ Sri Tony Fernandes who was honoured with the award by Her Majesty Queen Elizabeth II here today. 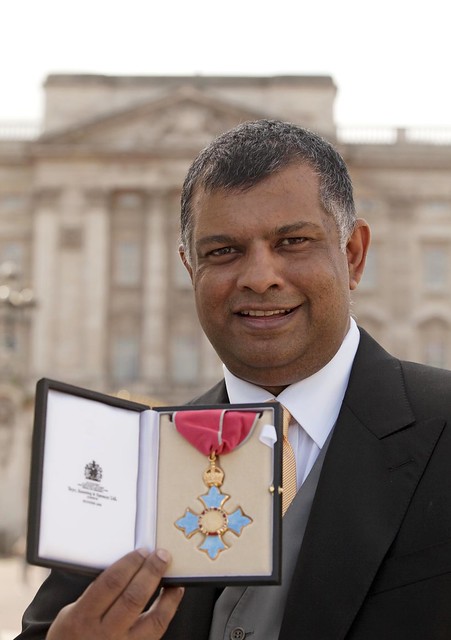 The award is attributed to his “services to promote commercial and educational links” between the UK and Malaysia.

“I am extremely humbled to have received this award today and I would like to thank Her Majesty The Queen for bestowing such an honour upon me. More than a personal honour, it will serve as a catalyst to further enhance relations between the UK and Malaysia, particularly in the areas of business, culture and education,” says Tony Fernandes CBE.

He adds: “I receive this award today not on my behalf, but on behalf of all the incredible people I work with, wherever they may be around the world. It is their dedication, passion, enthusiasm and hard work that drives me on every single day and it is also my great honour to have the privilege of working with them.”

Tony’s personal credo is “Dream the Impossible, Believe the Unbelievable and Never Take No for an Answer” and he believes deeply in providing opportunities throughout his businesses for talent to flourish, for meritocracy to reign and for helping people realise their dreams. “I realised mine, and I am determined to help others realise theirs too,” sums up Tony’s approach to his work and personal life.

His business philosophy is simple: Serve the Underserved – a philosophy encapsulated in AirAsia’s memorable tag line: “Now Everyone Can Fly.” Having democratised air travel by freeing it from the clutches of the elite, Fernandes is determined to break down the affordability barrier in other aspects of daily life – hence Tune Hotels, Tune Money and Tune Talk, the radical Team Lotus approach to F1 – and the Epsom College campus in Malaysia.

The CBE is the second major award conferred on Fernandes in Europe. In 2010, the French government conferred upon him the title of Officier of the Legion d’honneur, the highest award for a non-French national, for his outstanding contributions to the aviation industry. Fernandes was also recently named “Asia Businessman of the Year 2010” by the international magazine Forbes, and has gathered a slew of other top awards from private bodies and media organisations for his innovative approach to business.

NOTE: The picture and the news release above is kindly forwarded to me by the PR department of the Tune Group and hence it is reliable news.