Today’s post is by Ms Marian Eu; a respected writer from various publications and I’m most honoured that she had agreed to share her story of her dining experience recently at TEN Japanese Fine Dining Restaurant with Iron Chef Mr Hiiroyuki Sakai and Japan’s No. 1 Patissier’s – Mr Toshihiko Yoroizuka on my blog.

Here’s her story of the wonderful dinner as below. 🙂

Iron Chef Hiroyuki Sakai was last in Kuala Lumpur in 2011, for the opening of Ten Fine Dining restaurant in Solaris Dutamas.  He was back again at Ten at Marc Residence recently, together with Japan’s No 1 Patissier Toshihiko Yoroizuka to present two dinners titled Two Masters of Heavenly Cuisine. 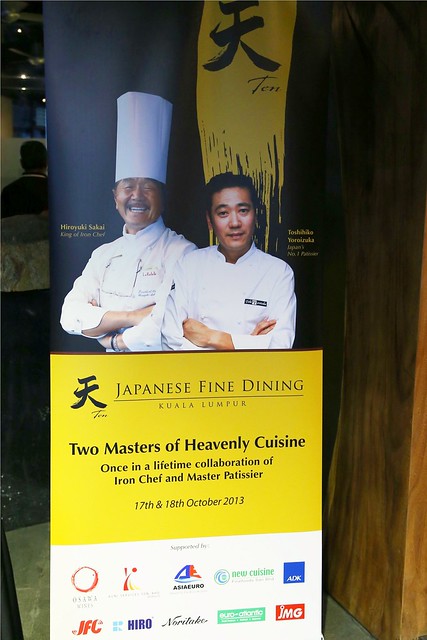 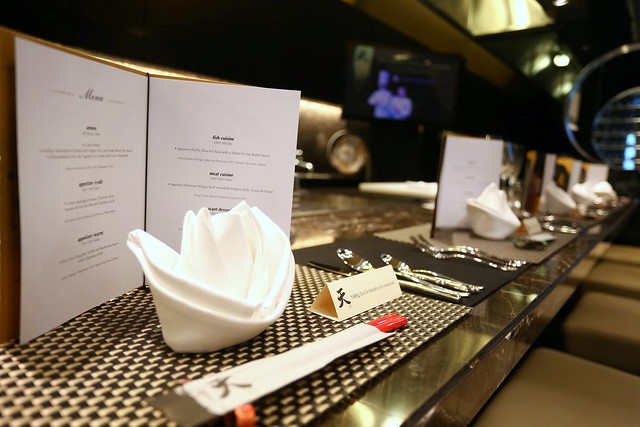 I’m a big fan of the Iron Chef series which ended in 1999. That year Sakai was crowned “King of Iron Chefs” in the show’s grand finale, beating Iron Chef Chen Kenichi. In the show he was always pictured wearing his red, shiny French chef’s costume rising into the Kitchen Stadium holding a nashi pear.

We did get to eat a nashi pear in the Compote Poire — towards the end of this grand seven-course dinner paired with wines – in a pre-dessert prepared by chef Yoroizuka! Diners paid RM1,200 per head for this dinner which was attended the previous night by a former Prime Minister of Malaysia. 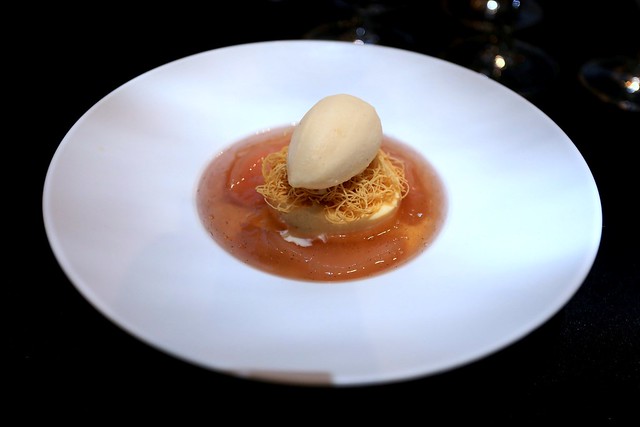 A TV monitor in the room where we sat allowed us to watch the two chefs in action in the kitchen. First it was Grand Patissier Yoroizuka demonstrating some sugar work and presenting this beautiful Malaysian Sea Wave to his audience.

In the meantime we were being served the amuse bouche of Cake Piment, Halibut Marinated in Konbu with Angler Liver and Cedar Barrel Soy Sauce aged three years prepared by Yoroizuka, Sakai and the Ten Chef Miyake. 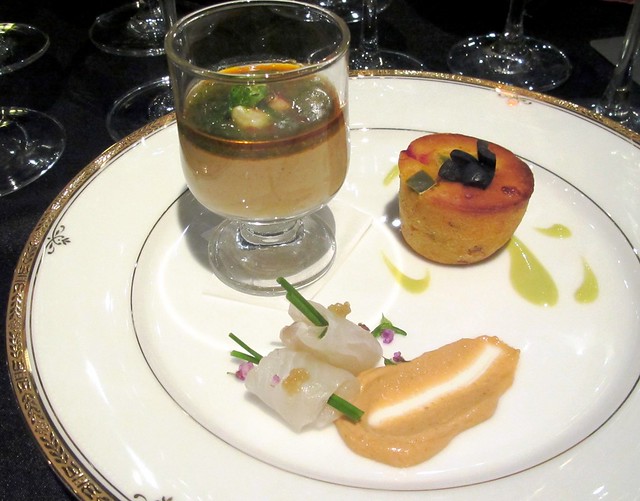 These were worth drinking a toast to with the Billecart Salmon Brut Rose NV, Champagne, France. I was blown away by the Chawanmushi with the Fragrance of Lobster and Aonori Seaweed which was super silky, with a lobster bisque flavour, and was studded with a knob of lobster.

There was the firm and sweet halibut touched with konbu and paired spectacularly with the smoky, creamy and complex angler liver. It was so good. The Cake Piment was both sweet and savoury, and a little hot from paprika. There was some cured beef in it, and black olives.

Halibut Marinated in Konbu with Angler Liver, Chawanmushi with Lobster Fragrance and Aonori. 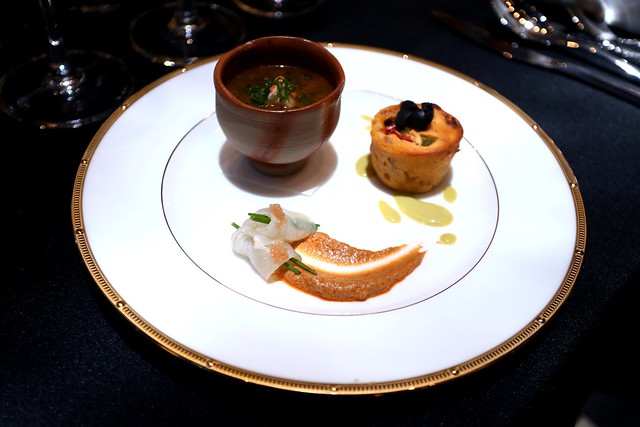 We all loved the Ten house sake, Tokubetsu Iyunmai-syu from Niigata, Japan, which was poured for Sakai’s Green Asparagus Mousse Charlotte Style, Assiette de Fruit de Mer and Oscietra Caviar. The charlotte ring was assembled with asparagus, then filled with asparagus mousse and jelly. King crab, abalone and prawn nudged against crunchy cauliflower, snow peas and more asparagus, with glistening globules of black oscietra caviar, welcoming for its salty bursts. 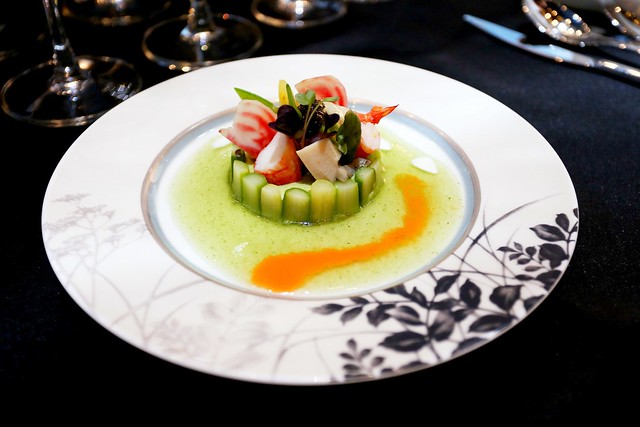 This cold appetiser, and the warm one that followed were by Sakai. The Foie Gras Croquette, Truffle and Mushroom Sauce with a Parmesan Tuile was awesome in parts, though we had misgivings about foie gras being encased in a croquette even thought it was crusty and crispy. The foie gras was the star, and oh yes, the truffle and mushroom sauce too. The wonderful aroma of truffle just upped its deliciousness.
An award-winning wine Osawa Prestige Chardonnay 2010, Hawke’s Bay New Zealand was paired with this. Much thought had been given to the different wines for the different courses. It was skilfully done. 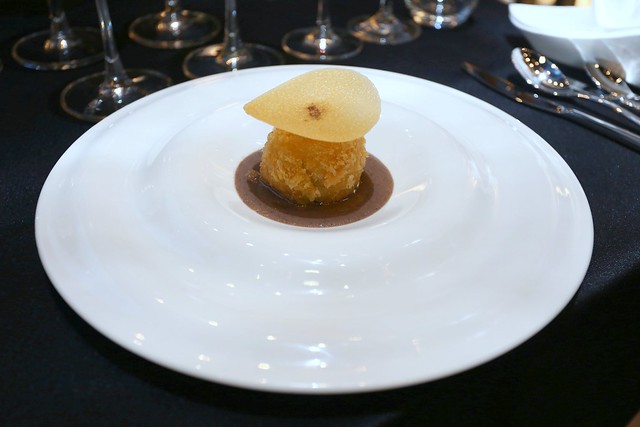 The Japanese Pacific Blue Fin Tuna with a Shark Fin Soy Butter Sauce  by Ten chef Miyake shone for the smoked tuna sitting on soft, spicy eggplant with a tart ponzu. There was a creamy and sweet potato dumpling with a touch of wasabi. This texturally delightful assemblage went very well with the Osawa Prestige Collection Pinot Noir 2011, Hawkes Bay. 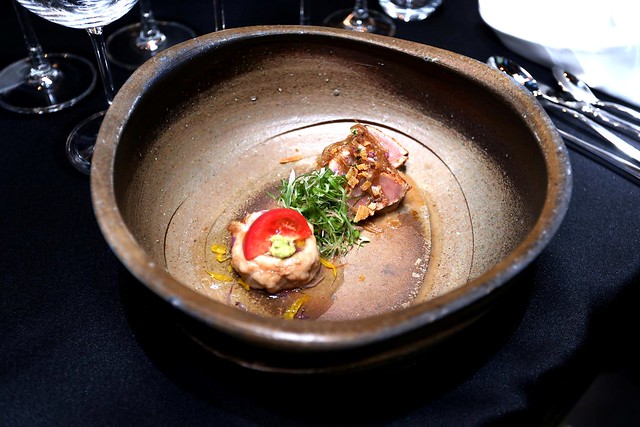 Then it was Sakai’s turn to wow us with his Japanese Premium Wagyu Beef served Wellington Style, Sauce de Bouef. The beef had been wrapped in bamboo leaves, then wrapped with bread dough and baked in the oven for 20 or 30 minutes , then at 120C for five hours (that was what the translator said!)

This was when I enjoyed Sakai’s kitchen theatrics on the TV monitor. He poured brandy and vodka over the crust of the Beef Wellington and set it on fire, flapping his hands over the flames, and laughing as he did so. He was so exuberant and comical. He cut through the covering of the beef, opened it up and sliced it. 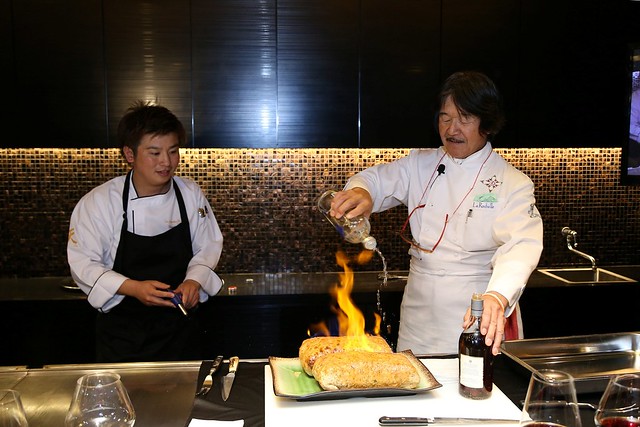 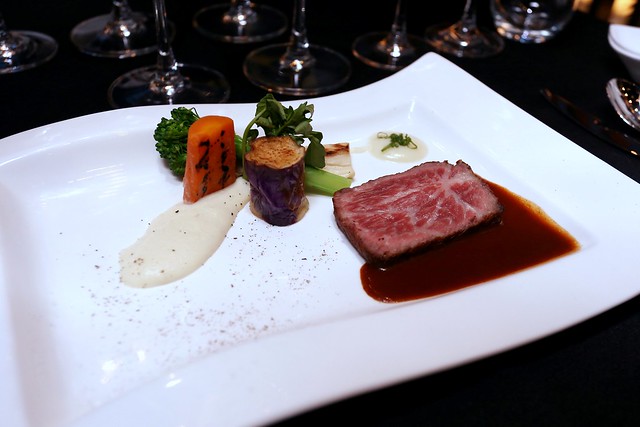 It was fantastic beef that he turned out. Pink and moist, it tasted like it had been sous vide, and melted like butter in the mouth. It was so good! I would have loved to try the alcohol-fueled covering of the Beef Wellington too. With this, I understood why Sakai is the Iron Chef of all Iron Chefs.

We had the Flying Sheep Merlot Cabernet Sauvignon 2011 with this.

The pre-dessert of Compote Poire by the internationally celebrated patissiere Yoroizuka had the pear poached in white wine and finished with sabayon.  It had mousse in the centre, blobs of pear jelly and ice cream stting atop crispy tempura flour noodles.
This was perfect after all the courses we had. The aromatic and lovely Osawa Noble Gewurztraminer 2011, Hawkes Bay, was poured for this.

The Grand Dessert was La Terre Nourriciere. It had pistachio soil at the base, then chocolate mousse studded with hazelnuts, with ice-cream on top. We saw Yoroizuka shaving truffle over it. Still it was upstaged by the truffle ice-cream which was wonderfully suffused with truffle aromas. 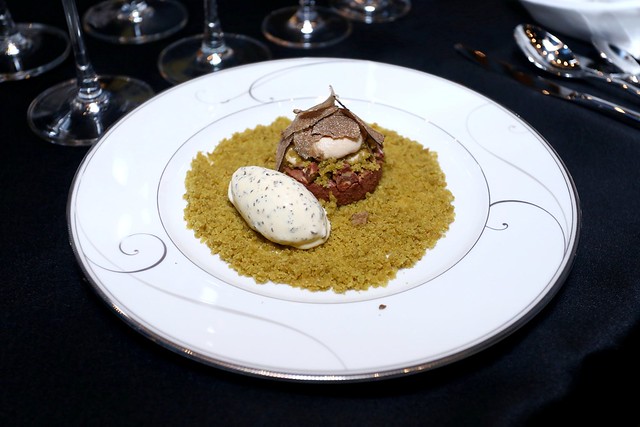 Sakai and Yoroizuka later came round to greet everyone, stopping for pictures with them. 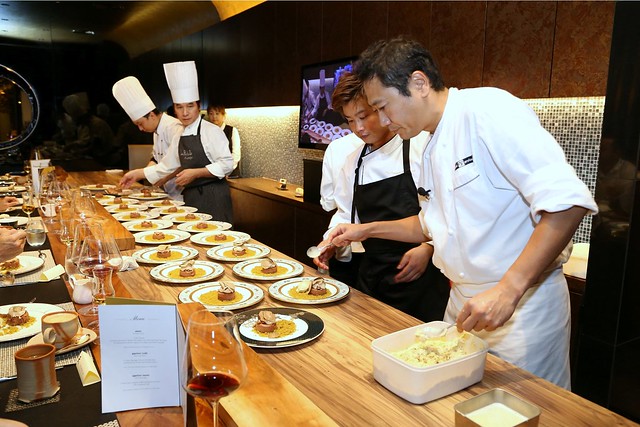 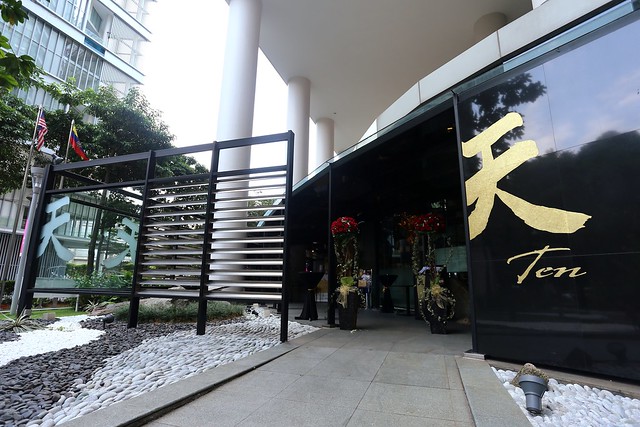