It was timely that after a week long of F1 events and hot days at Sepang that I sat down and ate a nourishing meal like this.

This soup, double boiled for 4 hours using the chinese “Black Chicken” (a breed named Silkies and prized by the Chinese for its perceived medicinal value) was wonderful and soothing to the soul. 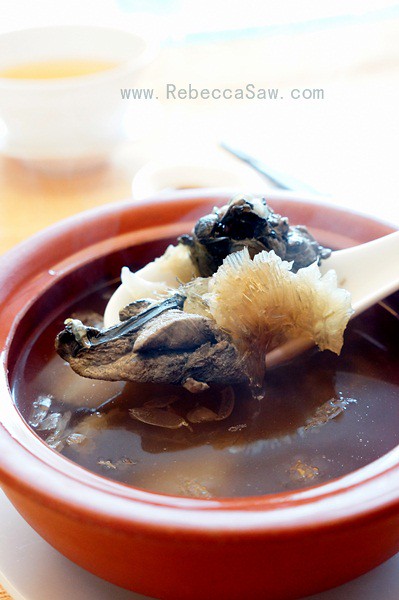 I inhaled the waft of fragrant chrysanthemum essence when the waitress bought the soup into the room and was instantly eager to get started on the soup.
As I sipped, I loved that each spoonful has a perfect balance of savoury flavour mingled with the sweetness of the chrysanthemum flowers. And the smell of the soup was almost floral!

The soup aside,  Zuan Yuan tea infused promotion is worth checking out especially for the RM98 set. 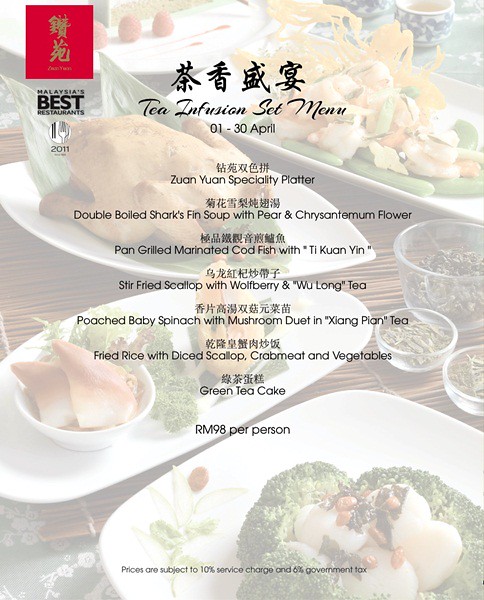 I thought it was pretty reasonable, almost cheap even, considering the ingredients and the myriad of dishes offered. 7 individually portioned dishes, but each substantially filling and the set covers seafood, meat, soup, vegetables and dessert. 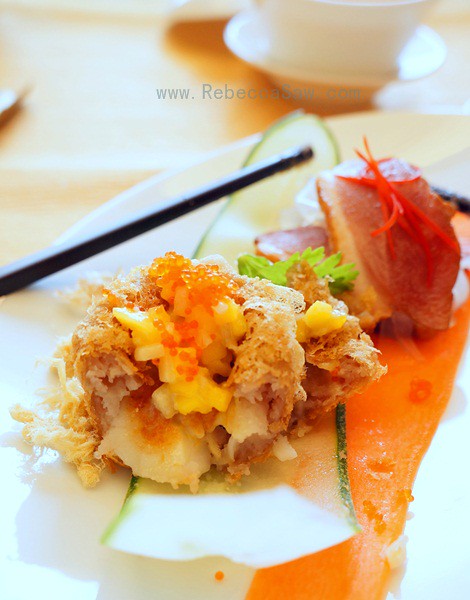 Praises goes to Chef Michael for the clever mix of sweet savoury scallops and sweet tangy mangoes which was combined with cruncy sweet chestnuts and briny ebiko.
A lover of yam, it’s given that I enjoyed this whole little ensemble.
The side of mung bean noodles gave a little fire as it was coated with some spicy sauce. I thought it was another savvy match with the salty smoked duck, giving more character to each toothsome bite of the noodles. 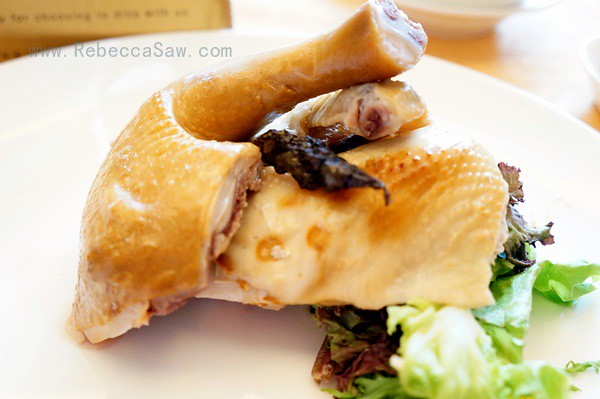 We got half a spring chicken each and that was too much even for me. 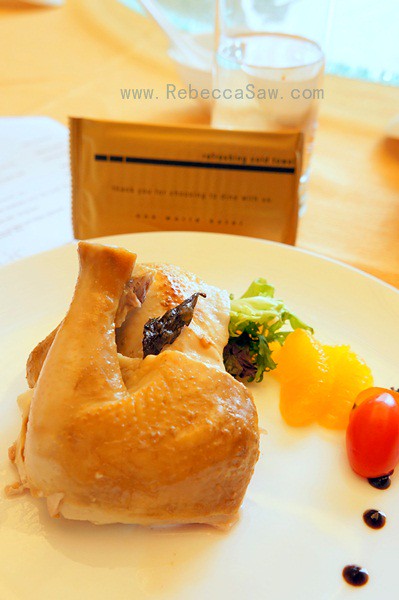 I particularly loved the conmingle of smokiness & subtle tea flavour in the chicken. The flavour was infused right to the deeper folds of the breastmeat, but do note that it was very subtle.
A quick chat with the chef revealed that the chicken was cooked beforehand, wrapped & smoked with tea leaves prior to serving.

Though not a shellfish fan, I still finished both prawns as it was delightfully fresh, so fresh that each bite was crunchy and so sweet! For this, the tea flavour wasn’t even subtle. More of non-existent. But the overall dish keeps in theme with the tea and healthy concept, with very little seasoning or oil added. 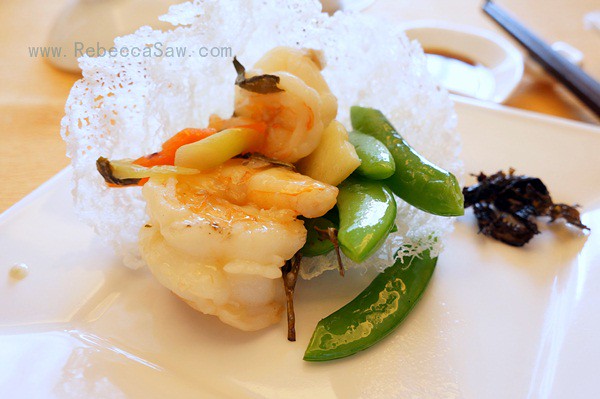 I highly recommend this April’s Tea Infused Promotion to those who prefers their food clean in taste and low in seasoning. However, this DOESN’T imply that the food is tasteless. On the contrary, it’s subtle flavours that doesn’t leave you feeling heavy after lunch. And it’s easy on the digestive system too. 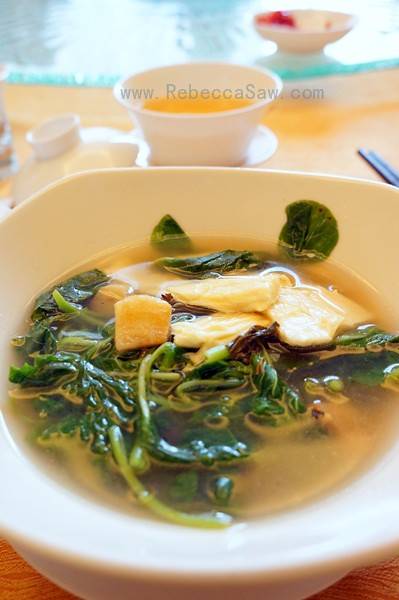 This isn’t part of the promotion – Fried thin udon with light satay sauce. Chef Michael just wanted to make sure we were all stuffed. Well, I won’t complain as there’s 2 more crunchy big prawns on it! Yea!! 🙂 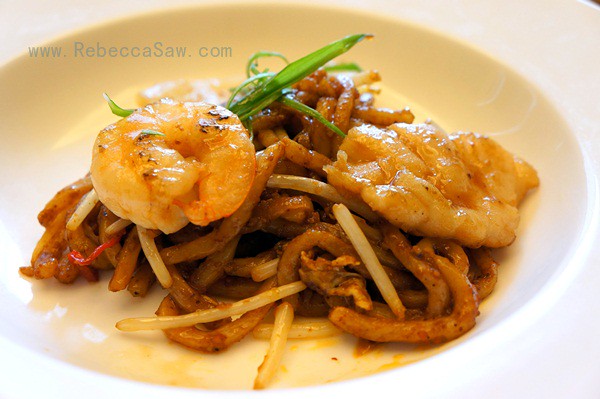 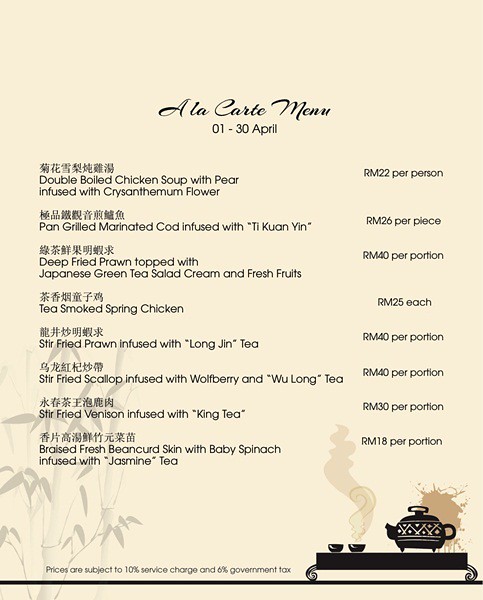 Last of the set is Green Tea Cake from One World Hotel’s pastry chef. One of the better ones so far that I have had. This boasts of a very natural green tea flavour and aroma layered moist sponge. Full as I was, I finished it; minus the cream of course. 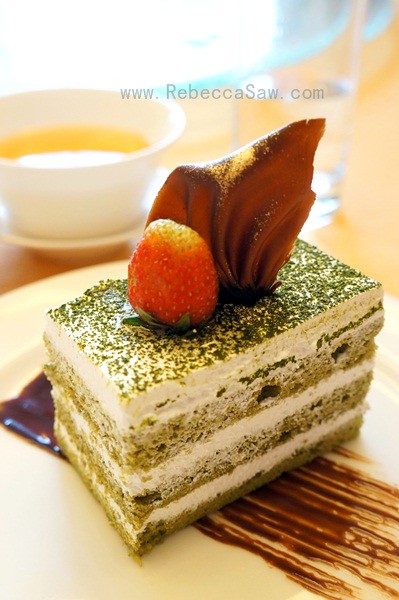 Zuan Yuan has monthly promotions so there’s something new every month. I remember a Thai food, a HK dim sum, Shanghai menu and a Cantonese menu promo so far.
I have not been to all of them but I hope there’s Sze Chuan one soon. Or some cuisine from some remote part of China. That would be something different for us foodies! 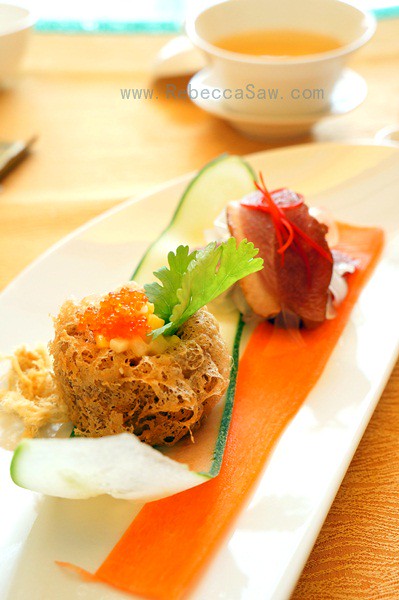