CC had somehow done it again. Just as I thought I had sampled the best of her cakes, she came up with an avocado cake!

Here’s my loot just yesterday, a reward for myself after appearing on Bella Society on NTV7, marking a great start to the year 2013. 🙂 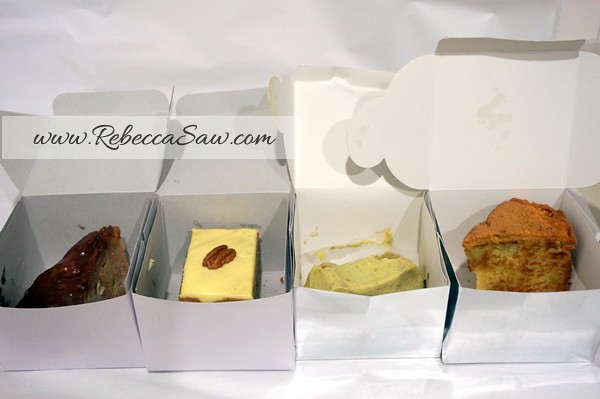 Thanks to Daphne for the pictures of us on air, live on NTV7 Bella! :DD 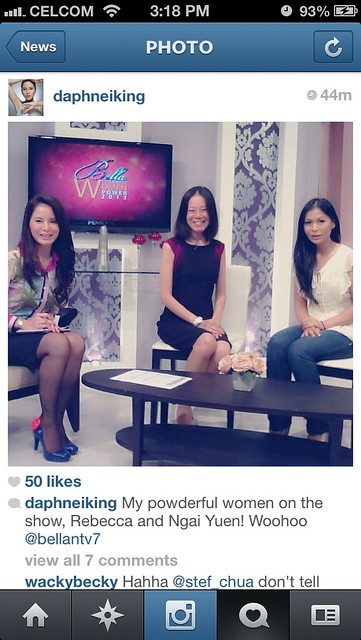 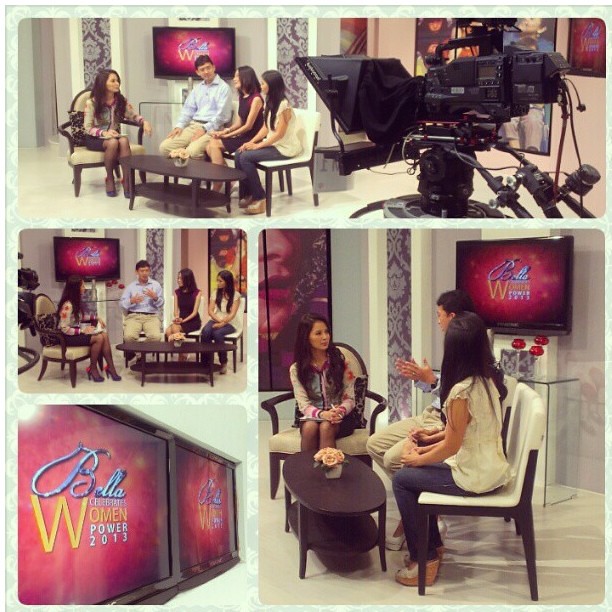 But more on Bella TV and the avocado cake later! I’m going to show now you the 3 cakes that I sampled earlier last week, starting with the intriguing Mangosteen Cake.
This must be the first mangosteen cake (that I have heard of anyways) in KL. 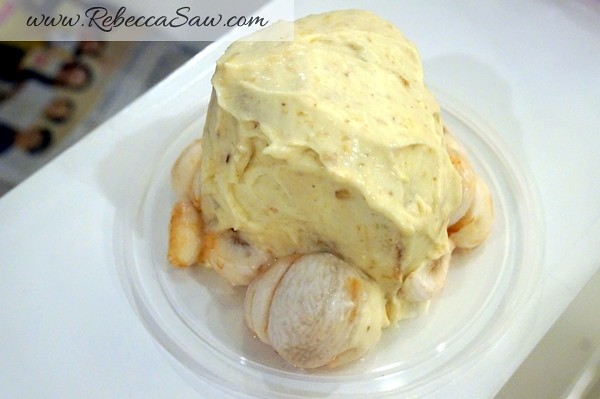 Quoted from Swich’s FB Page: “A light Mangosteen Cake made with mangosteens and a touch of pomegranate (another wonder fruit!), frosted with mangosteen cream and topped with more fresh mangosteens, served  optionally with caramelized cashew. ”

At first glance the  free form cake wasn’t exactly a work of art. While it might not win awards for presentation, do allow yourself to judge only after you had taken a bite. 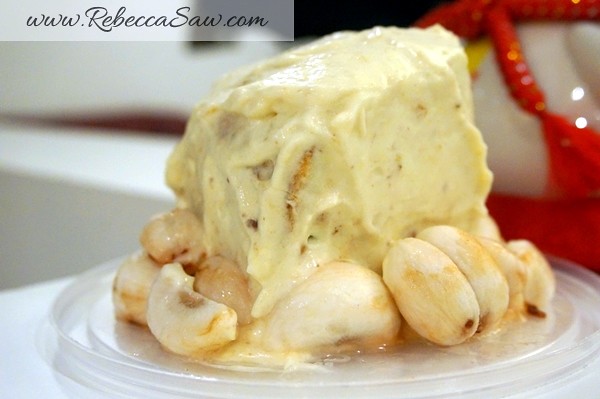 Here’s a scenario.
You order a cute and prettily decorated cake from a bakery, cafe or restaurant, more likely than not priced at a premium, took a bite and then wondered what could have possibly justify it’s price. Often, it is either too sweet, too greasy, too dry or it tasted like a 10 year old’s school baking project.

If “YES”, then I’ll like to introduce you to Swich Cafe’s repertoire of cakes. You can check out my previous pictures on the Durian Mud Pie, Hummingbird Cake, Fruit, Cempedak and Carrot Cake HERE. None of Swich’s cakes had disappointed me so far and this is one cafe that I can confidently recommend to my friends who are seeking good quality, wholesome cakes. Even if they do not like all of Swich’s cakes, there’s also very little chance that they will hate any. LOL! 😀

For this round, I made my way to Publika to pick up ONE “limited” edition Mangosteen Cake. I was lucky to bump into CC again, ever smiling and cheery as usual.
I spied on the display a Red Velvet, and after sampling so many of Swich’s cakes, I had to try if their Red Velvet is as good. After all, Red Velvet is really popular and finding a good one has been a challenge.

Thus here goes, the prerequisite pictures and the guessing game that I play each time I eat; what’s in what I’m eating? 🙂 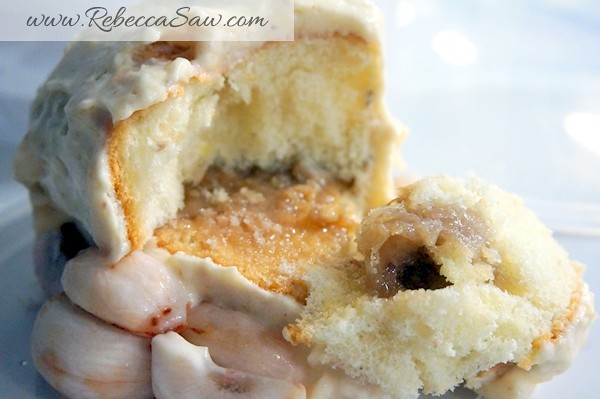 The light sponge appears to me to be ordinary cake sponge. The middle section had a layer of mangosteen puree (or more like mangosteen jam), the only part I dislike as I find it too sweet. I failed detect any form of pomegranate. In a nutshell, the best part was the frosting which had a very distinctive mangosteen flavour and the juicy fresh mangosteens circling the cake. 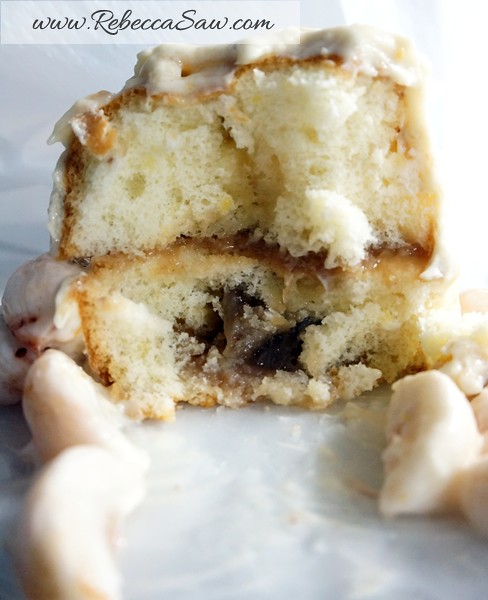 After having eaten most red velvet cakes in KL and now officially jaded with the whole Red Velvet craze, I couldn’t pass up an opportunity to sample Swich’s Red Velvet the moment I saw it. After all, Swich had not disappointed so far so I figured that their Red Velvet can’t fail too badly. 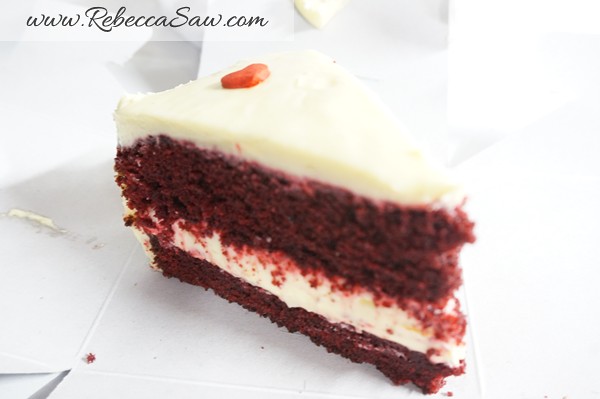 The moist Red Velvet has a fine crumb with a hint of cocoa, so it remained subtly chocolatey but didn’t sell itself out as a pure chocolate cake. Based on what I have read over the years, the taste of red velvet should be somewhere along those lines.
There was a slight tart taste at the end (just as I swallow) that I couldn’t explain but my other taster Kevin argued that there isn’t so that left me in doubt. The cream cheese frosting was similar to the same one on Swich’s Carrot Cranberry cake; thick and sweet. We found some orange peel embedded within the cream cheese, which we presumed was supposed to give it a very light touch of zest. 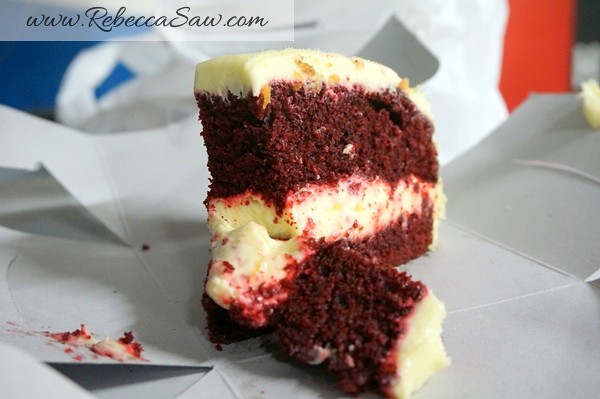 Finally, the Burnt Sugar Cake. I cringed at the thought of a cake that has the word “sugar” in its name. As if we need to be reminded that a cake might be sweet. This outright tells you that it’s sweet! However CC gave this and the Mangosteen Cake as complimentary for me to sample so I obligingly bagged it home. 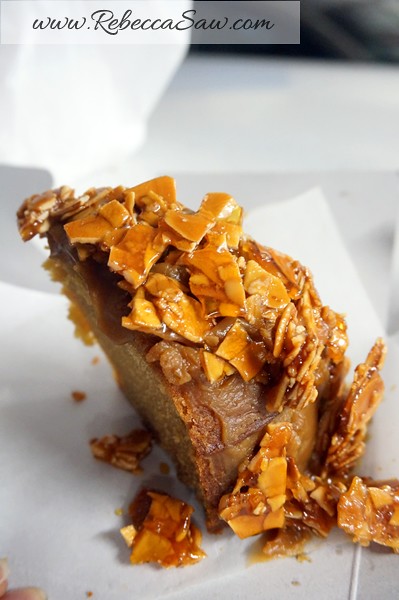 It turned out to be a surprise cos I actually enjoyed it immensely. Firstly, the almond brittle was addictive to nibble on. Be forewarned that it could get cloyingly sweet after a while unless you have a super sweet tooth. 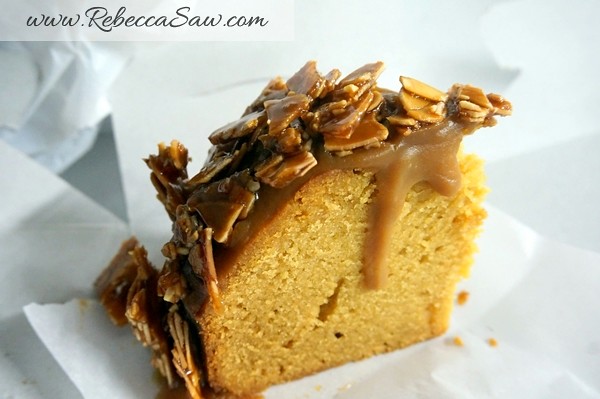 One layer below, the thick burnt sugar frosting tread the fine line between tasting unpleasantly burnt and delicately smoky. This state of caramelization is difficult to master but in CC capable hands the frosting turned out perfect; smoky though expectedly sweet. At least it wasn’t the straight-on, slap you in the face sickly sweetness like those coating commercial popcorns. It wasn’t as runny either. Perhaps it’s the butter. 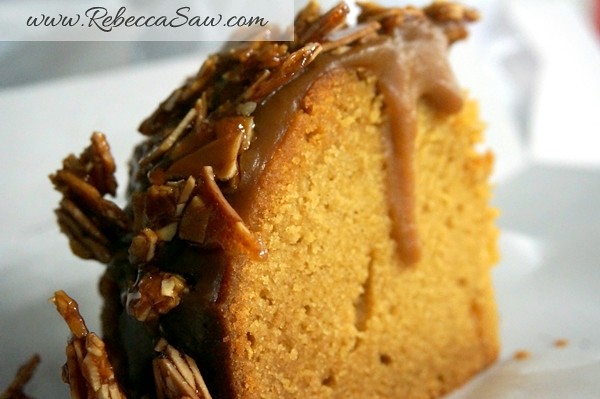 As for the cake itself, it is a dense butter cake base but with the aroma of caramel.  Definitely a butter cake with a smooth twist! 🙂 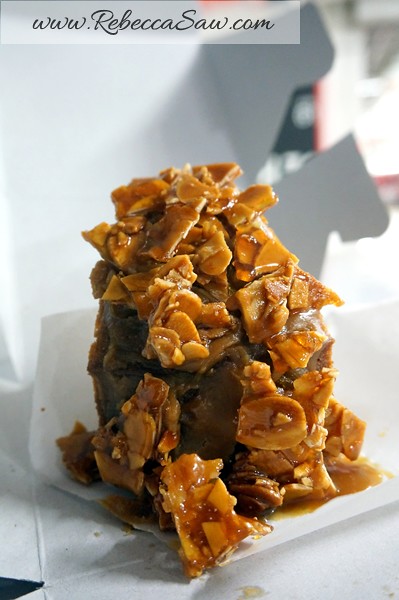 I hold Swich Cafe and CC responsible for my expanding waistline. But on second thoughts; to heck with that, cakes like these are worth the calories! :DD

Next up, my review on Swich’s Avocado Cake, Banana Cake and Apple Cake!