Sharone Hakman of Masterchef US – Cooking demo in Mid Valley!

I had the privilege of interviewing Sharone Hakman when he came to Malaysia last week as part of his recent promotion tour. Out of all the chefs I have had interviewed, met and chatted with in my blogging life and as a foodie, the one thing that struck me hard about Sharone was his genuinity. That big guy is thoroughly REAL, and I could catch no pretenses from him throughout the duration of the half a day I spent trolling him from the interview room to the supermarket and till he finished his cooking demo on stage at Mid Valley. 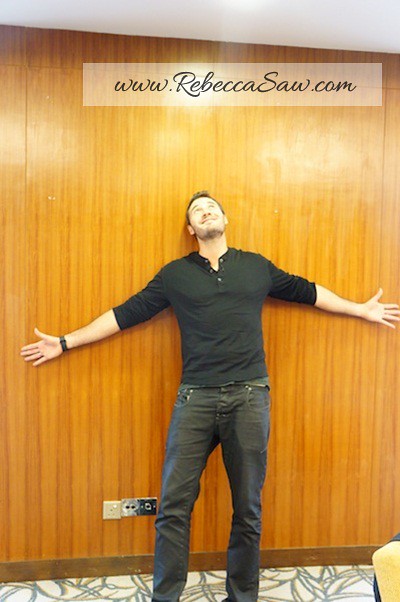 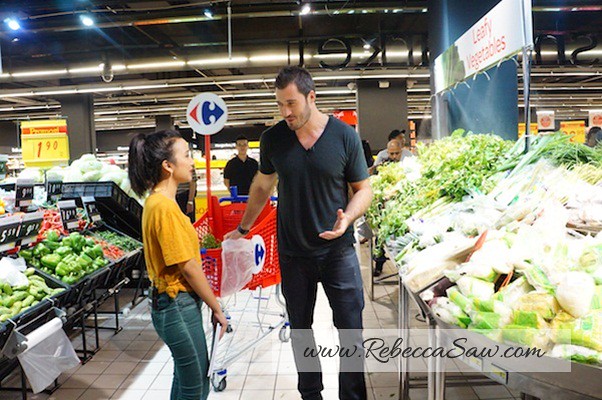 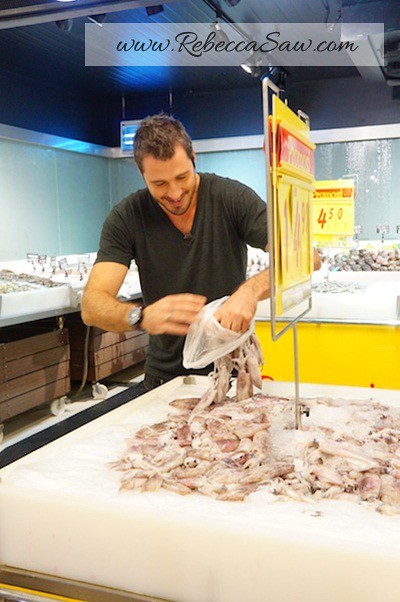 Below: Paying for his groceries – he even joked with the cashiers. 🙂 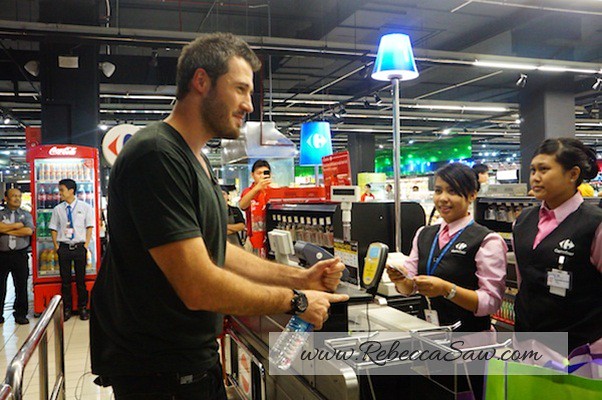 While with other chefs I caught a sense of reservedness, or maybe even a touch of arrogance (the “I don’t think you know food, or what you’re talking about but since you’re writing about me, I’ll give you some time”), Sharone treated everyone and anyone with the same boyish charm and easy attitude.

He was tired and that is undeniable. By the time he hit our Malaysian shores, he has been on the road for cooking demos, interviews and media appearances day after day for weeks and yet I saw him light up and all re-energised when the topic of cooking and food came about. A chef can say he loves food and cooking, but it’s when they talk about it that you’ll catch that glimpse of TRUE passion, and in Sharone, it wasn’t just in his WORDS (he did as all chefs, said he lovesssssss cooking), but in all muscle fibres of his body. 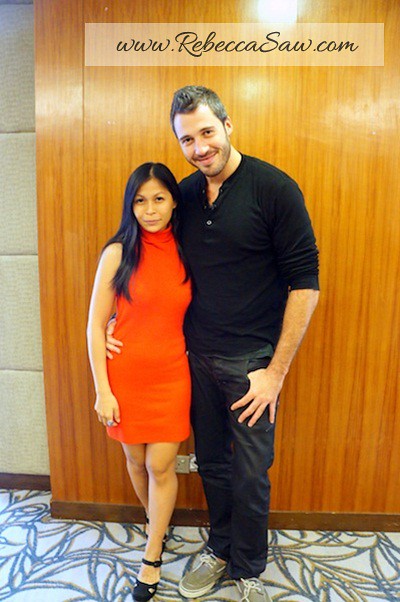 Of course he could be putting on a show; being on TV and now making his “media” appearances. We all know they (TV chefs, reality shows finalists) might put up a front for the camera. But Sharone, I’ll like to think he’s as affable and charming as he was during media sessions when he’s alone and at home. 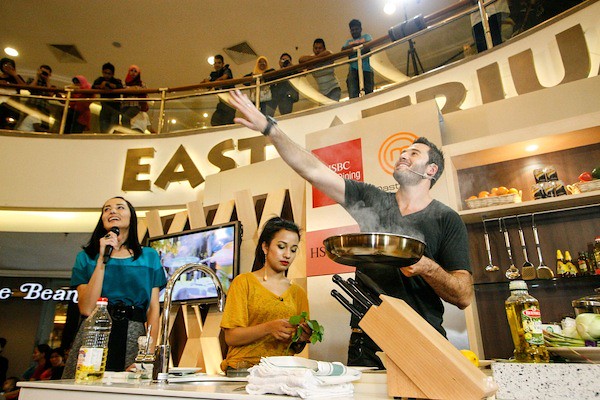 Oh, it helps too that he gave me a bottle of his Hak BBQ sauce! Bribery! Hahah, just joking! Find out more about Hak’s BBQ sauce here: http://www.haksbbq.com/ 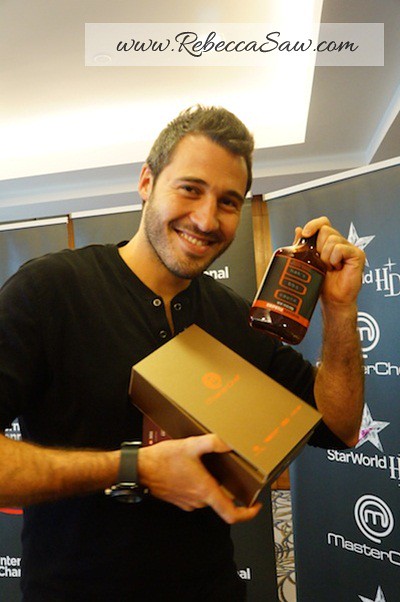 Hak’s is his very own creation and brand of BBQ sauce. Being a firm believer in health and good food, Sharone had spent a great deal of time and effort in the research and production process of Hak’s. The sauce contains no preservatives, artificial flavourings or chemicals. During the interview, he revealed that he’s a “go by instincts” kind of person, and the same principle goes into his way of cooking. Thus to formulate the recipe for his Hak’s sauce, a process that has to be documented strictly since it’s setting the standard for all future bottles, Sharone admitted that he had a hard time.

He said it was really difficult for him to be so “methodical and calculative”; to have everything measured by exact miligrams, so much so that he needed a team of scientists right behind him as he cooks to help him lock down the recipe! 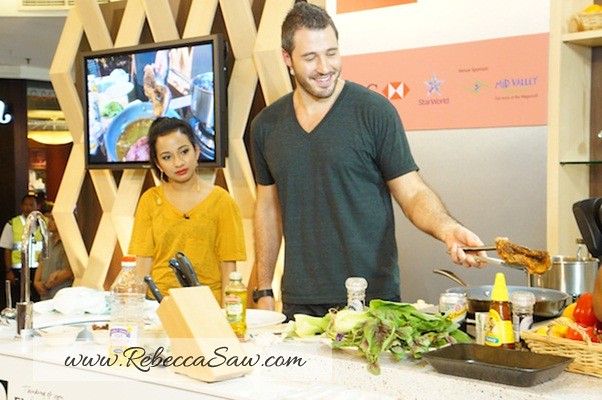 Ah cool, he’s my type pf chef! Remember those olden days of cooks – our grandmothers and mothers? A pinch of this and a shake of that? Yes, all that “agak-agak” recipes! Instincts are best, and great chefs have them in the fibres of their being! 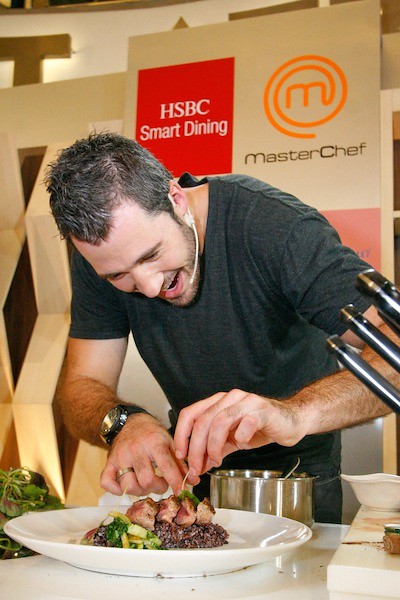 There were some questions that we asked during the media interview; one of which “What Malaysian food have you sampled so far?” . His reply ” Nasi Lemak” . Oh yea! *Fist pump in the air!* 😉

In fact he liked it so much that one of the dish he cooked during the cooking demonstration that day was black rice infused with coconut milk. Black rice was used because it is healthier and also for the aroma and taste. He tried to use as much local ingredients as possible and another of his dish was our local squid fried with a concoction of our spices that he picked up from the spice section of Carrefour, Mid Valley. 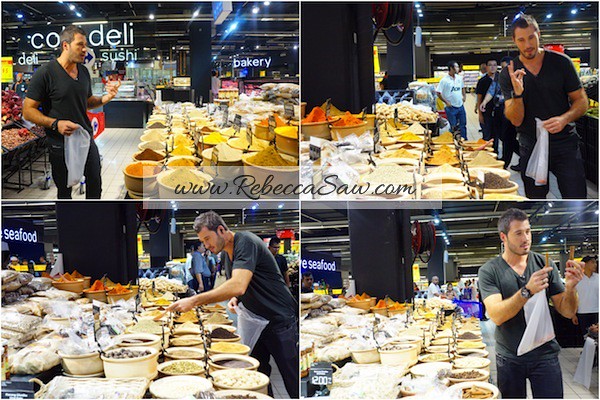 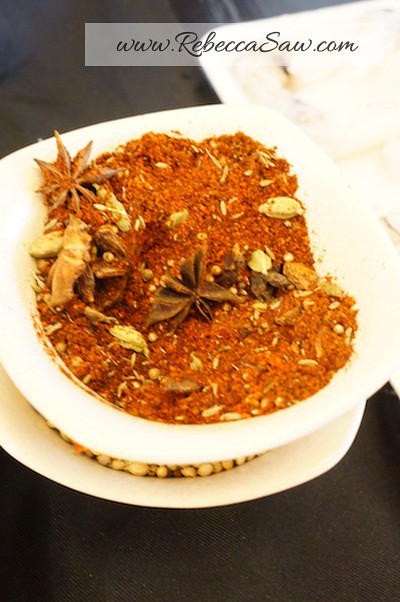 Below: Dish Number 1 -Fried squids. (Ok, there’s a better name for it but I didn’t manage to ask Sharone!) 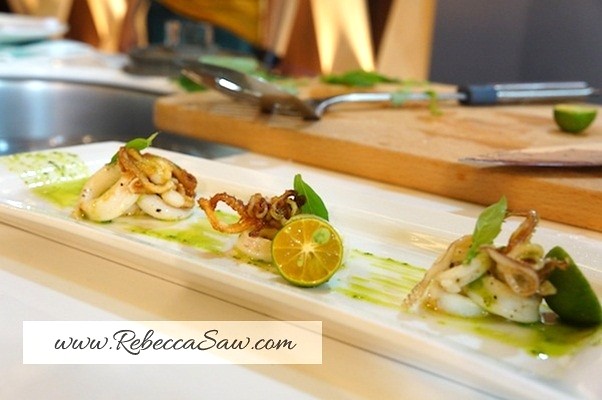 He added chilli padi (bird eye chilli) to his sauce for his duck dish! 🙂 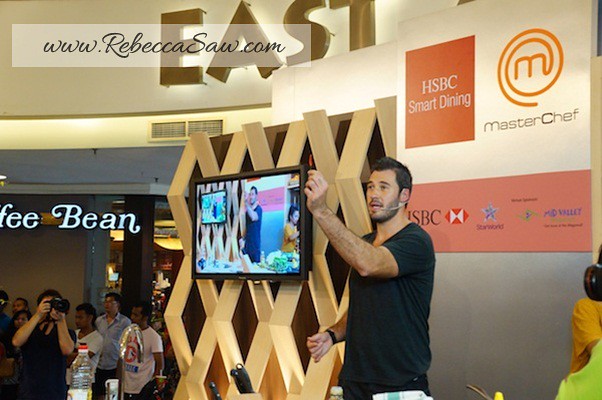 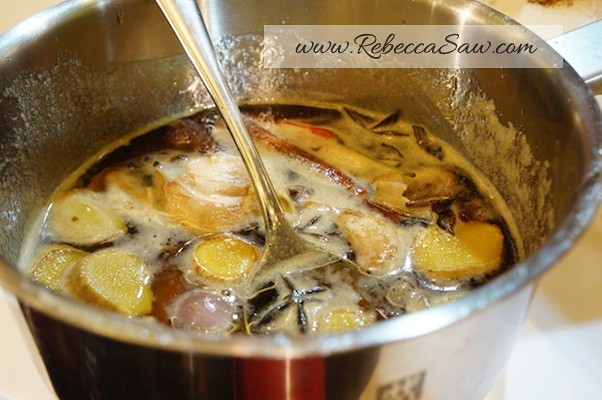 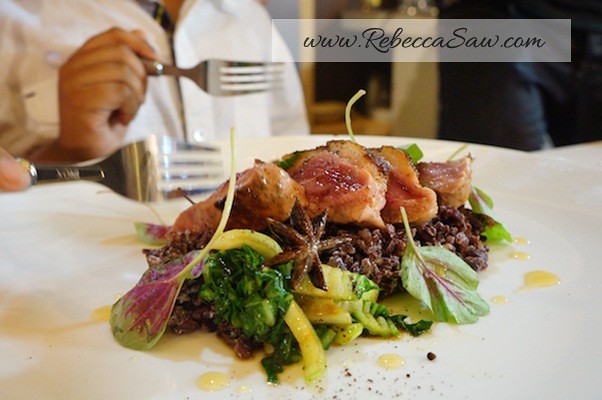 I got a piece! Yay! I snucked up to the stage real close and he cut me a piece! 😛 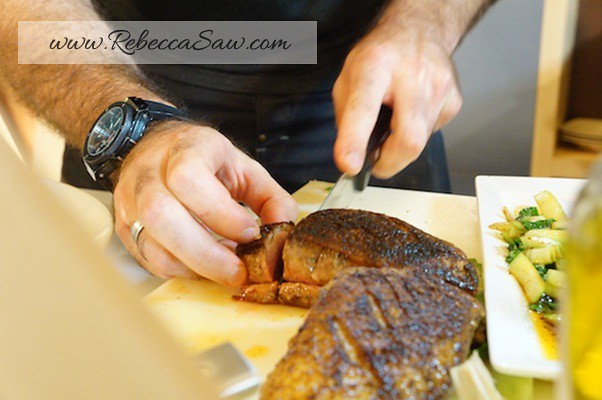 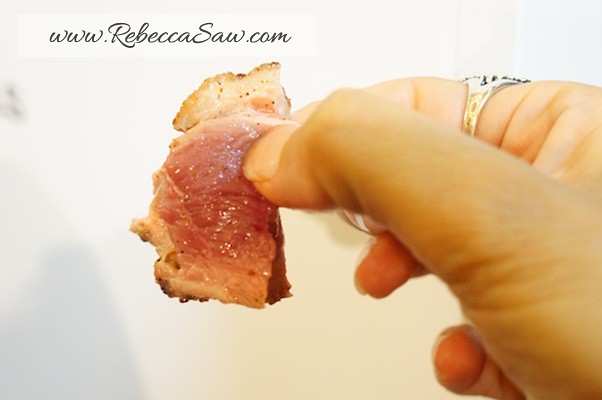 And oh, he came up with the ideas of these 2 dishes on the go, literally as he walked through the aisles of the Carrefour at MV. As usual Sharone selects and cook his ingredients based on instincts, which at most times turned out favourably. Another thing he joked about during the interview was how much he had “messed up” in his cooking journey, but he’s a firm believer that it is all a good lesson and it enhanced his overall life experiences greatly. He opined that one should always take risks and never regret the outcome. 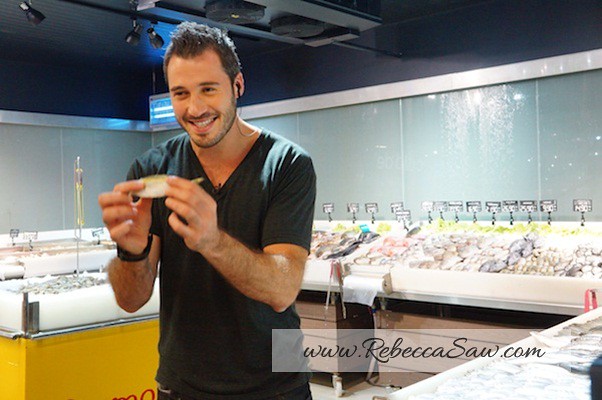 I loved how he was all smiles and incredibly engaging throughout his whole cooking session. He made sure “everyone” in audience was given attention and even tried to “speak” to the audience of the upper floors. Generously sharing tip after tip; such as how to cut a duck, and so forth Sharone was delightfully to watch. 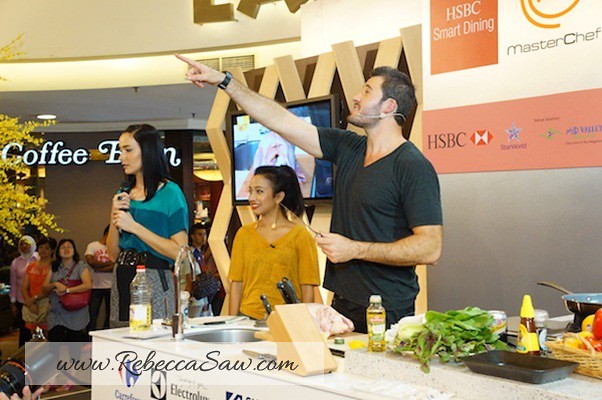 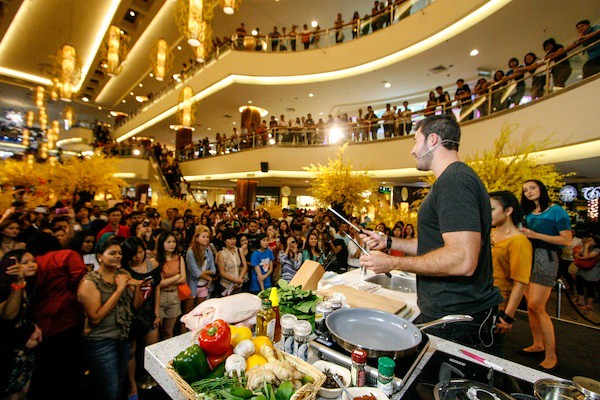 Thanks again Sharone for giving us your time! I’m definitely going to try the burger recipe you shared with the Hak’s sauce bottle and I’m looking forward to your new upcoming 2 flavours – chilli padi (bird eyes chillies) and honey as well as the pineapple and jalapeno. Sharone, please come again! 🙂

For more information, visit his official website. Or even better, stalk him on his Facebook page! :DD

Thanks to FOX International Channels (FIC) : www.foxinternationalchannels.com for this amazing opportunity!
Be sure to catch the premiere of MasterChef Season 3 exclusively on STAR World (Astro Ch 711) and STAR World HD (Astro Ch 722) on 16 September at 8pm.