This my favourite dim sum joint!  🙂 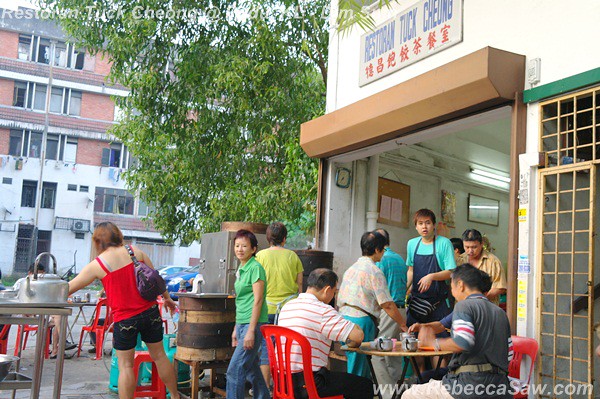 Yes, it was challenging for a foodie to pinpoint one joint, but this is it.
The reasons are apparent. It’s cheap, it’s tasty and it’s delicious old school dim sum. Everything is made in-house in accordance with generations old recipes. 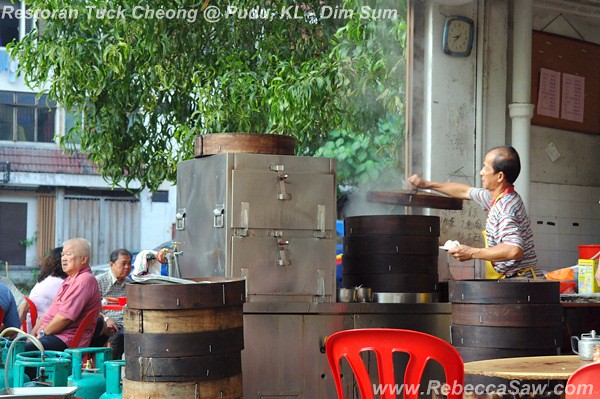 I reckon the people running the place the place are the owners themselves, or perhaps descendants of the founders. Thus you’re spared the pain of dealing with blur foreign workers and as an additional plus point, the selection of dim sum here adhere to a certain level of consistency as the owners takes pride in their products. 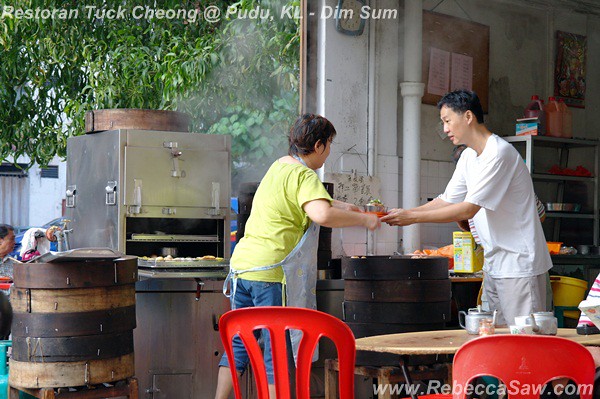 Fret not though, it’s not so old fashioned til there’s only boring siew mai and har kau. Slight innovative twists to the selection of dim sum are present, starting with the fish paste beancurd wrapped broccoli. It’s a nice spin from the traditional yes? 🙂 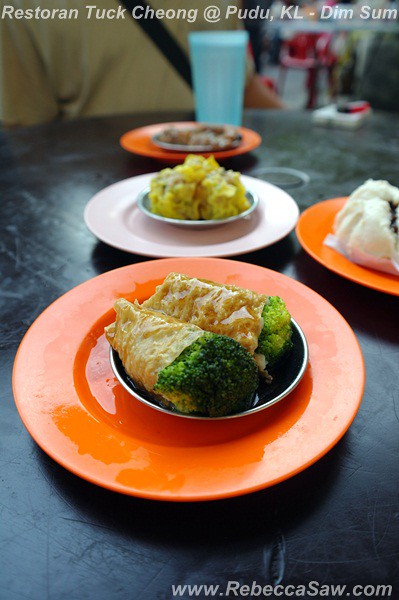 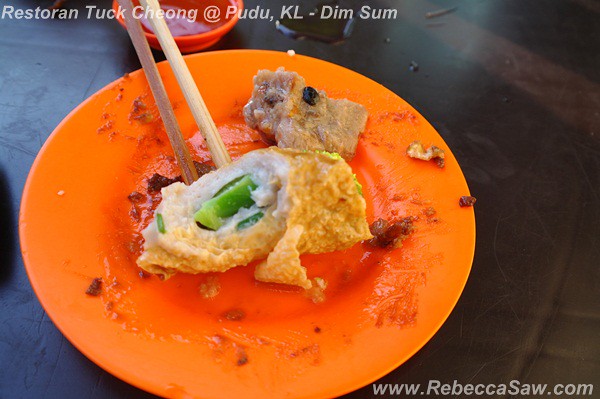 This place was recommended by a fussier foodie than myself; Leon and if he had no problems with the food, it should please just about everyone else in KL. LOL.
Anyhow when you see a crowd like this, with majority of them old citizens who obviously knows their food, you’ll be convinced of Tuck Cheong’s quality of dim sum too! 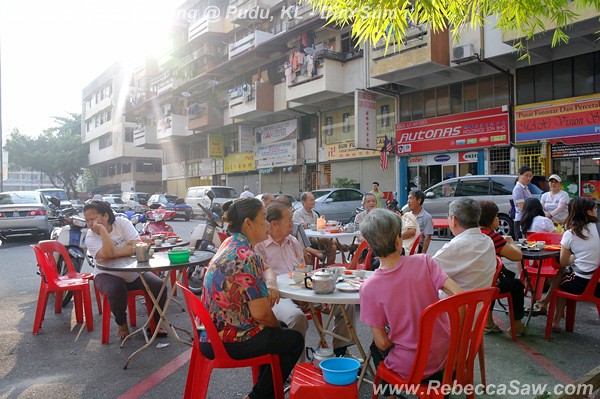 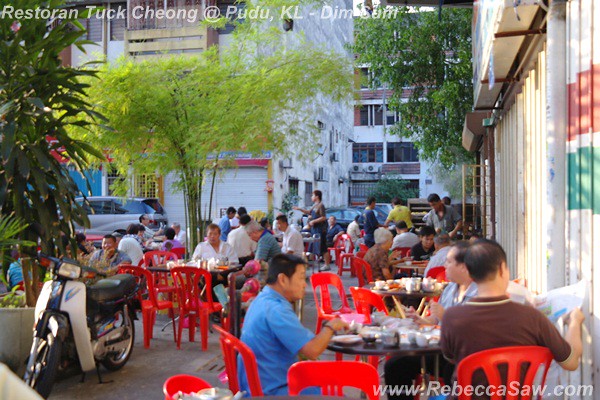 On Tuesdays and Saturdays, Tuck Cheong serves a special pork ribs and steamed chicken rice. Come by 8am or risk being disappointed by the reply “sold out!“.

I lost the receipts, but each bowl is about +- RM5 . Overall, the dim sum here is pretty cheap, with each portion at about RM2 – RM5. 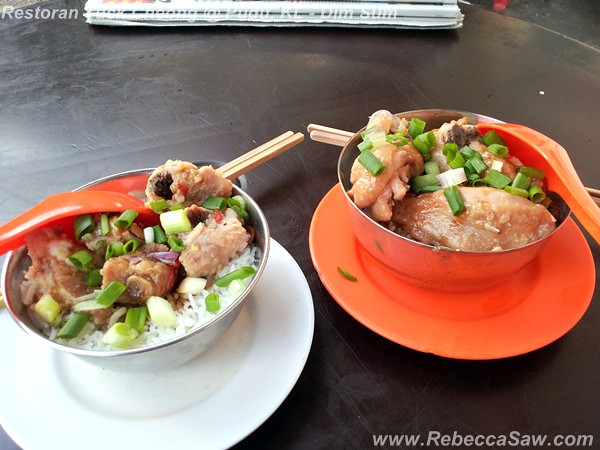 The tender braised pork ribs and its accompaning piquant gravy was good enough to be a one-dish meal. 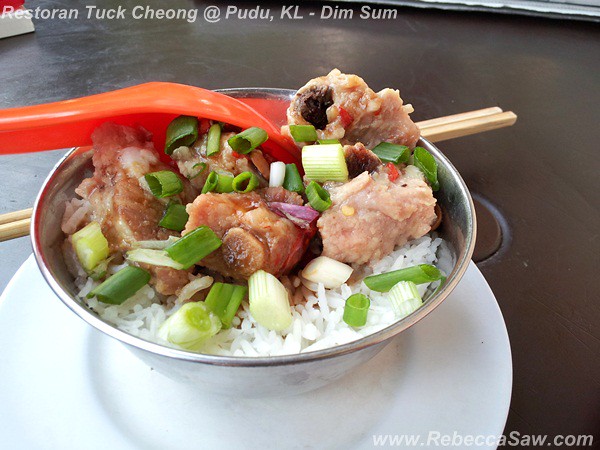 I pushed away the ribs on top to dig into the rice, moisten with the aromatic gravy of Chinese tau cheong (salted bean paste), chillies and other secret blend of ingredients. 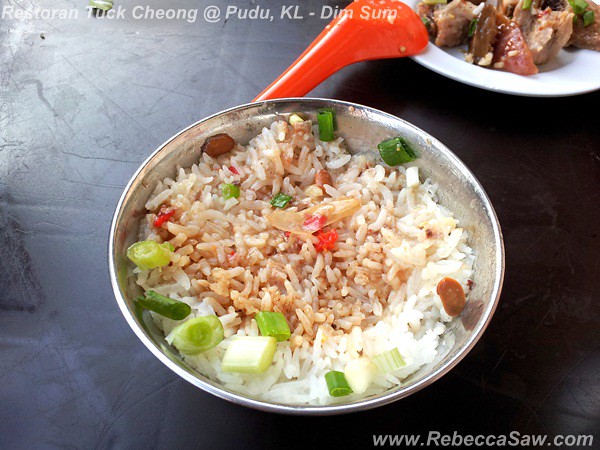 The Chicken Rice was better in my books. Tenderised with corn flour, this was alike a mini Claypot Chicken Rice. 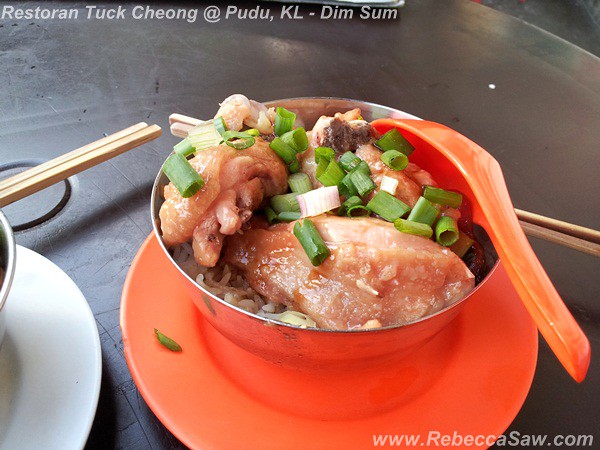 The little bowl was not mini with ingredients for sure; as each bowl came with a whole drumstick plus Chinese mushrooms and waxed sausages. Such a steal for the price paid! This would have set you back at least RM15+ in an upmarket Chinese restaurant. 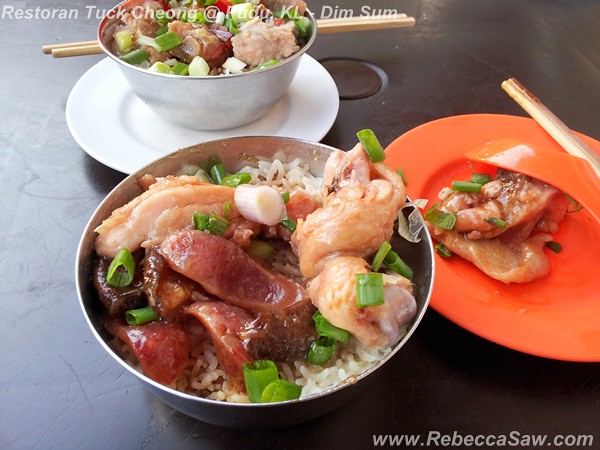 On another visit, we ordered the pork ribs and chicken rice again. As you can see below, the portions were pretty consistent. I’ll confidently vouch for the taste too. 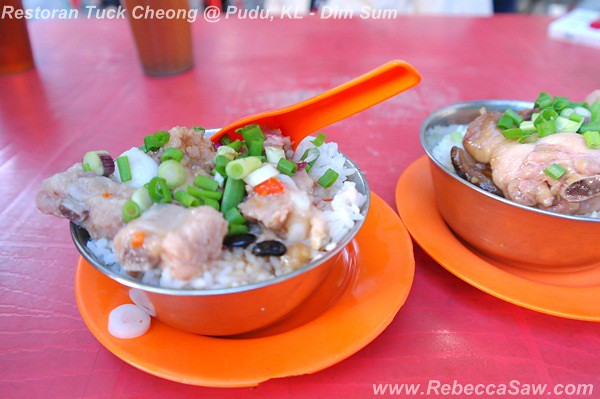 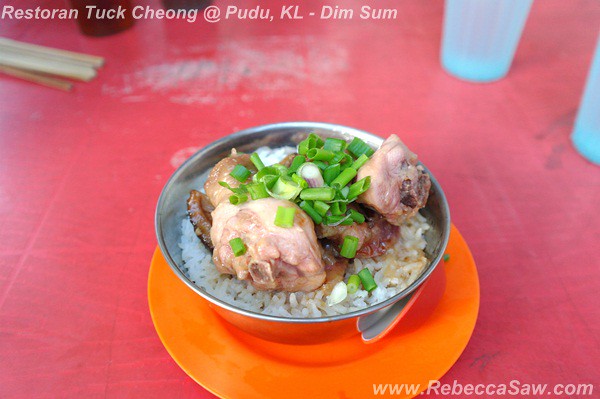 No dim sum meal is complete without my perennial favourite; the Char Siew Pau. 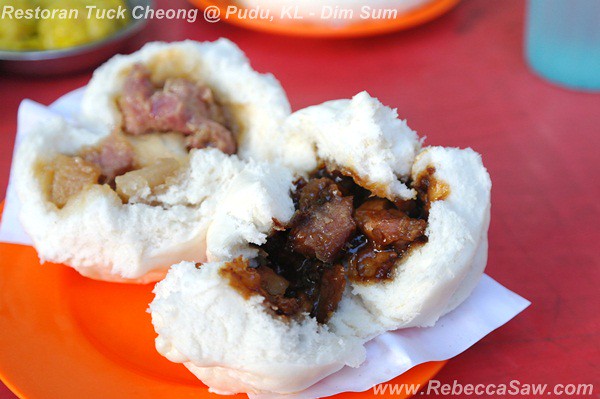 I’m always wary of such traditional dim sum joints as they tend to overdo the fatty bits. To the old folks, the fattier the better! Thankfully the char siew pau here had a balanced ratio of lean meat to fat, and the gravy wasn’t overly oily or sweet too. Nice! 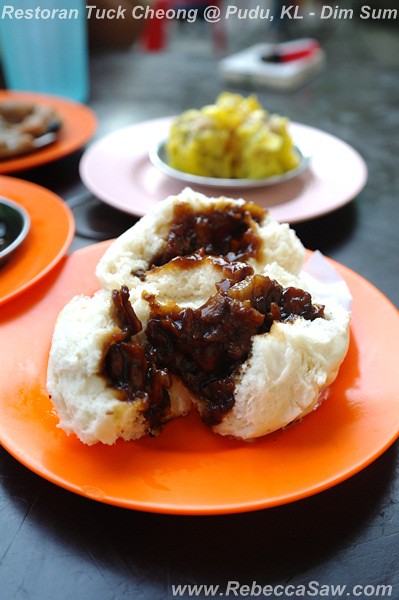 The  Big Pau (Tai Pau) was chock-full of ingredients, taking the record for the best Tai Pau I had so far. Lean pork, mushrooms, waxed sausages, chicken, turnips and egg were spilling out from the bun. 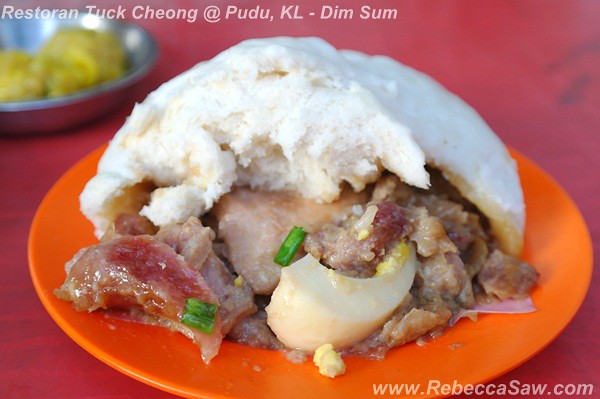 But being a typical traditional joint, the skin of the buns can be a bit on the compact side. Most of us prefer our paos fluffy; a trait more commonly found in posher restaurants and hotels. 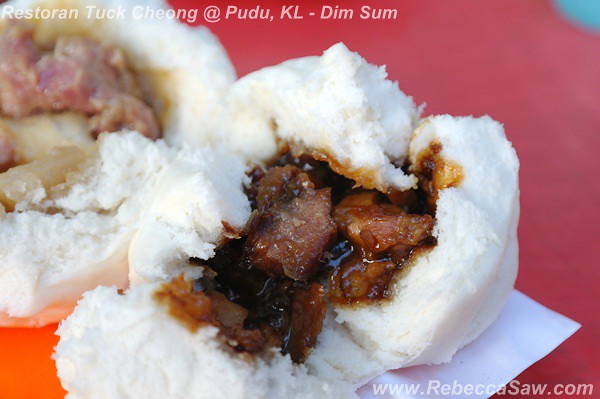 A typical meal for 2 as below would set you back for less than RM15. 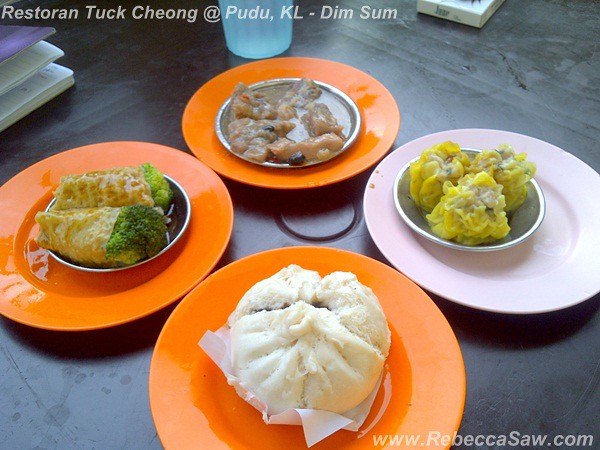 In my experience, if the dim sum is cheap, then it’s likely that the quality suffers. For example; more fatty bits in compensation for lean pork, more dough than fillings for the paus, etc.
That wasn’t the case here though. The dim sum here are meaty, delicious and fresh. 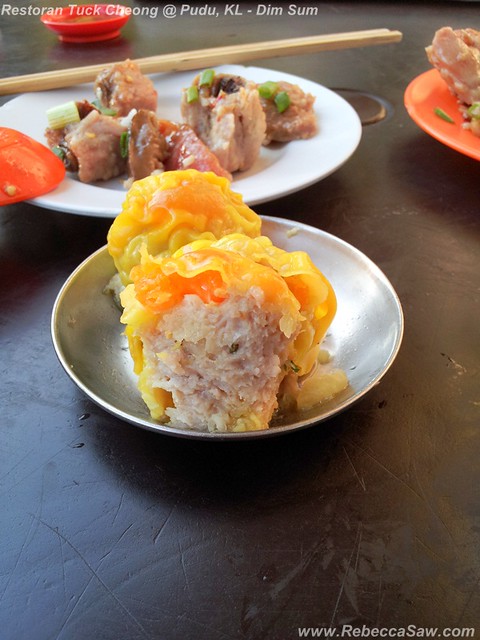 Same goes for the pork ribs. 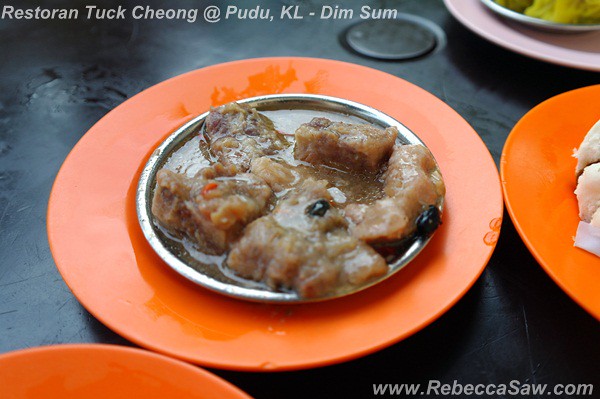 The fish paste was smooth and springy. 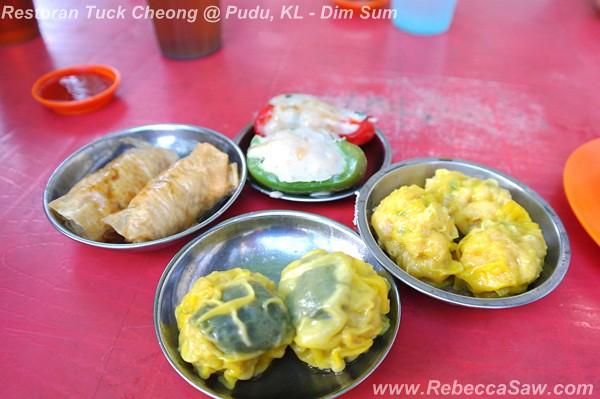 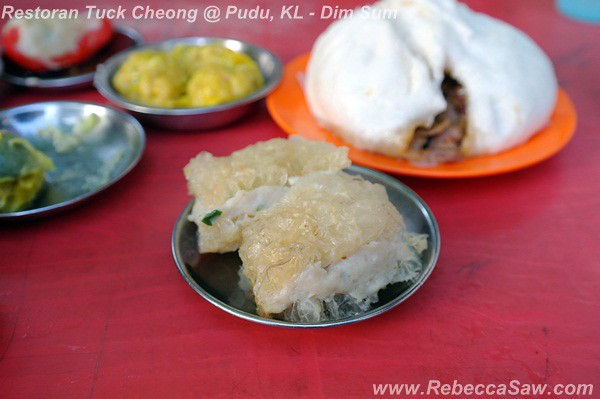 The only problem? You have to be early as business is very brisk. For me, I can visit only one in a while, as Pudu is considered far for me. Unless someone picks me up & drive me there and back!  😉