On my previous Penang trip, I attempted a char koay teow feat of eating char koay teow from 10 different stalls. All of these were recommendations from people who are living in Penang, or  those who were from Penang and had migrated to KL.
All of these recommendations came from my FB status where I asked my friends for their favourite Penang Char Koay Teow stall.
I’m a Penangite yes, born and bred but I have left the state for almost a decade. I can’t say I know the island very well anymore. In fact being a Penangite means I have my favorites, and it also means I have always stuck to my favorites instead of going around to try the char koay teow from other stalls. 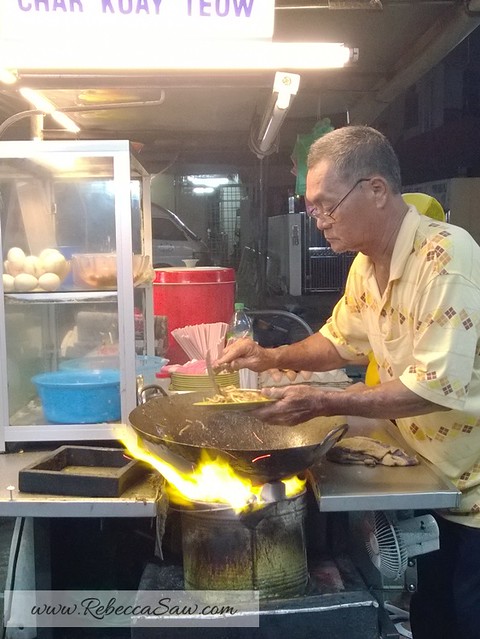 And so on this trip I became a tourist in my own hometown, exploring the island for its famous culinary, this time focused on the popular noodle dish which is char koay teow.
I was well on target but as you know, some stalls in Penang are open in the mornings only, some afternoons and some nights only. And unlike in the big cities, states like Penang and Perak still has the old hawkers who are the sort to open or close on their whim.

All in all, even on a rushed schedule I managed 8! Yups, 8 plates of char koay teow from 8 different char koay teow sifu (master). For some I finished the whole plate, some half, and the terribly greasy ones I only ate 1/3.
Well, if I don’t like it, I’m not going to eat it.

This particular one is at the Jalan Johor Hawker Centre. The Jalan Johor Hawker Centre is very much a local favourite. You don’t see tourists here. Though it’s only a small short street, the hawker centre is a covered stretch on a narrow pathway in between the field Padang Brown and the road itself. It is divided into 2 areas – the afternoon hawker street and the night hawker street. The hawkers on business at the 2 different timezones are different as well. 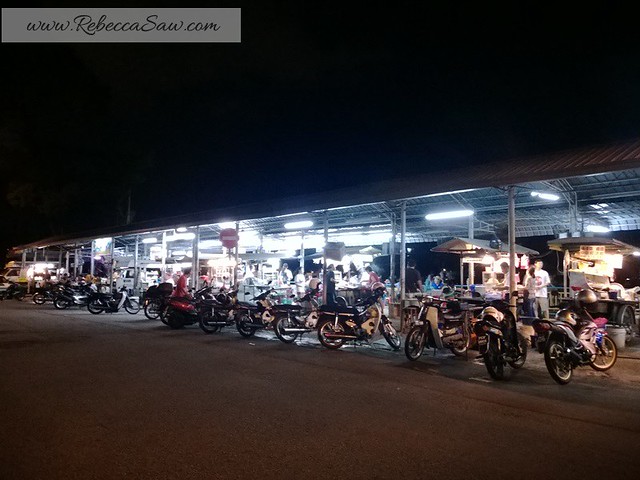 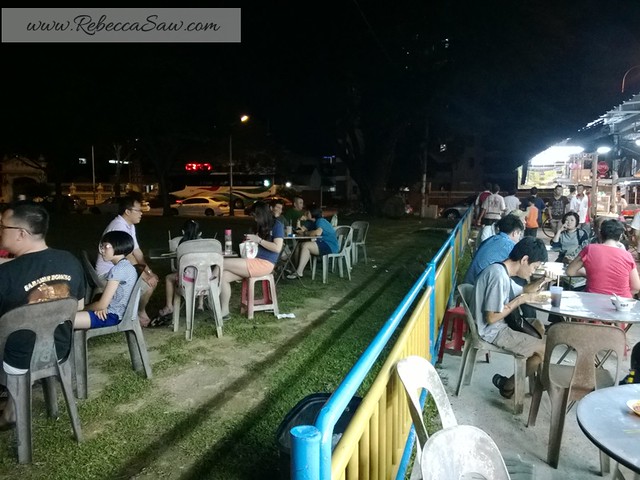 As I walked around to explore my dining options, I realized the hawkers were exactly the same as they were a decade ago!

Jalan Johor hawker centre is famous for its evening wantan mee stall. But my friend CC’s favourite char koay teow is here too.

The uncle is surly but his partner (presumably his wife) is fabulously chirpy and friendly. She even gave me advice on photography when she saw me taking pictures of the stall. She said “You should take the photo when he starts frying and take another of the wok when it’s full of koay teow!”.
Obviously aunty is used to the new culture of ‘taking pictures of food/food stalls’ before eating. Well aunty, hats off to you for embracing social media! 😀 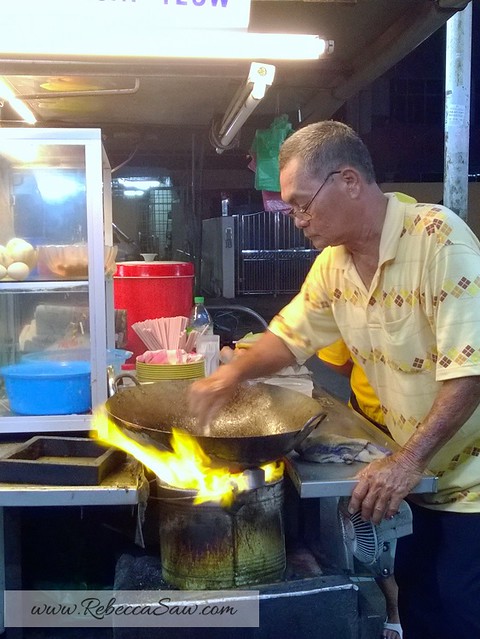 Since we were early our wait wasn’t too long. There were already people around us tucking into their char koay teow. I ordered a standard one, small; so it’s a fair comparison. I ordered a small portion, standard, no additional chilli or any special request for all the 8 plates of char koay teow I tried.

I didn’t like it very much. For one this is the blackish type; not the reddish kind that I prefer. The flavour is pretty mild and on the first 3 bites you would actually find it a bit bland. However if you preserve and chomp on, you will begin to find it palatable, with the taste of soy sauce more prevalent than chilli. It is borderline greasy as well. 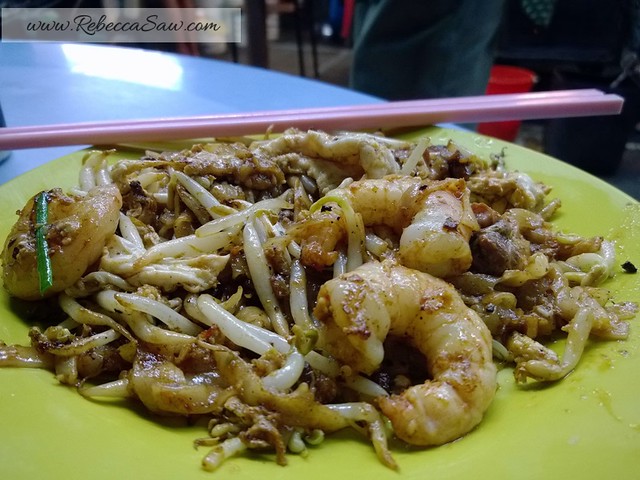 This Char Koay Teow comes with 3 prawns, lup cheong (preserved sausages), cockles, ku cai, generous amount of bean sprouts which helps to tone down the greasiness, all for RM5.50. We requested for duck egg.
And yes the uncle fries his char koay teow using charcoal. 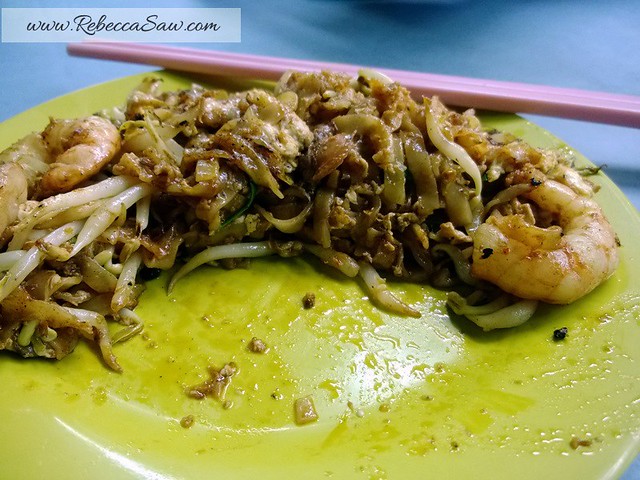 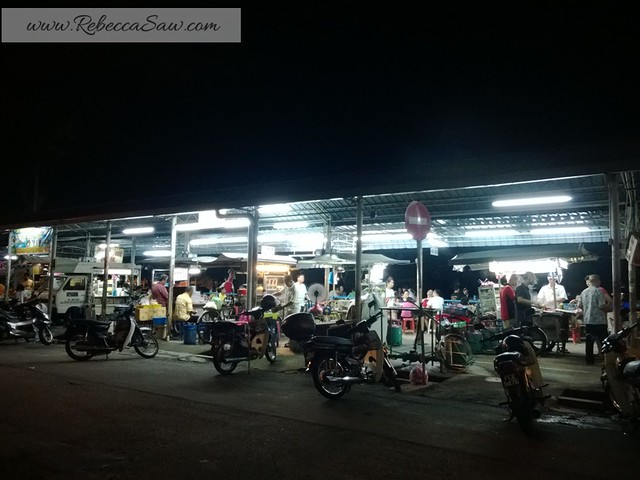 It was late in the evening and I was fortunate to have my phone with me. The pictures in this post was taken using the phone and they turned out pretty well right? I didn’t have my Sony NEX with me as it ran out of battery by then.

This particular phone camera I used is optimised for low light photography so it did the job as well as advertised. Anyone can guess what model was this phone camera? It’s one of the leading phone brands that is known for its camera technology. What it does is to boost lighting but WITHOUT having to use a flash. I hate using flash as that would normally make my photos harshly (unnaturally) bright.

I know many of us are photography enthusiast. If you think phone cameras are not capable of good night time photographs then you might want to check this link HERE out and takes your chances for a prize.
You will get to find out more about what the device I was using as well! 🙂 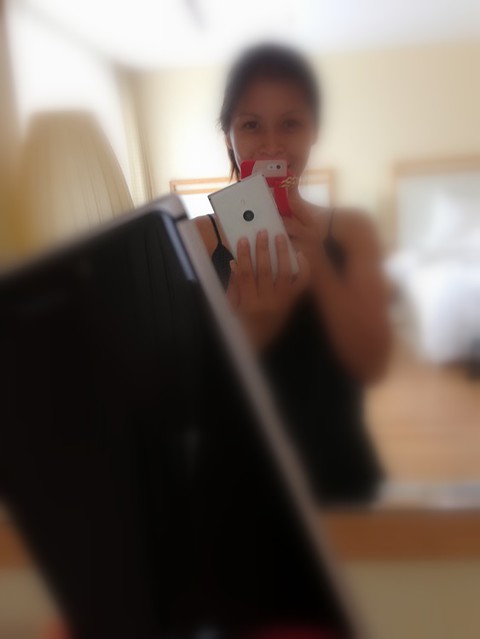