Must Do in Seoul – watch the Delicious Musical Bibap!

Other than the non-stop shopping, cafe hopping and the eating, here’s another absolutely MUST-DO if you’re in Seoul – watch the Delicious Musical Bibap! 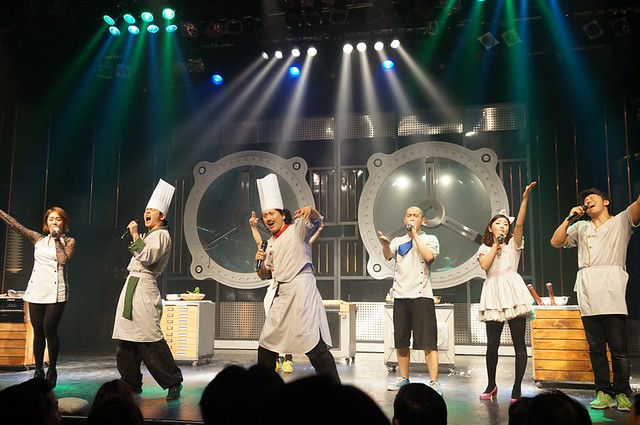 Introduction:
The Delicious Musical Bibap is basically 80 minutes of pure action and non -verbal musical performance. The story is acted out via capella, beat-boxing, dance, acrobatic and martial arts moves.

History:
Since its debut in 2009, Bibap has been staged and well-received at global venues like the 2010 Edinburgh Festival Fringe.
There is currently 5 teams touring the world and performing the same script – for example Seoul, China, Nagoya – Japan.

My experience:
I didn’t really know what to expect and was just following the itinerary set by KTO for this trip. If anything I’m the sort that avoid threatre performances as much as possible as I had always thought of these to be a waste of time.
Thankfully this Bibap show was entirely the opposite!
I was utterly transfixed throughout the entire show and laughed really hard.
I love how the script was entertaining but not overly silly. Some shows try too hard and ended up being cheesy or just plain stupid but for the Bibap, it was a delightfully charming and absorbing show.
This is a performance in which true laughter and entertainment abide, where the laughter is naturally bought out; a new performance with fresh excitement. 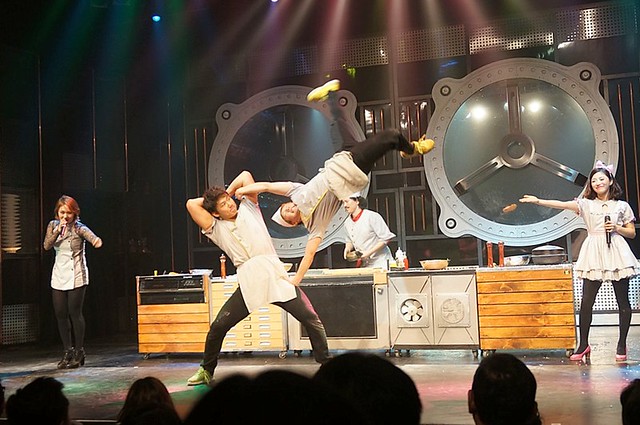 The story is based on 2 main chefs – the Red and the Green Chef. Both are vying to be the bibimbap champion chef for the last order of the day.
The supporting cast (but no less talented or entertaining) are:
MC Chef: HipHop Beatboxer; cooks using a variety of sounds
Rhythm Chef: Crazy Beatboxer, infinite RPM; cooks with the speed of light
Cutie Chef: Soprano with Multiple characters; cooks with a cue dolphin ultrasonic waves
Rookie Chef: Monkey B-boy; cooks with bouncing dance
Sexy Chef: Husky Alto; cooks with her sexy voice

I love the Sexy Chef. She has the attitude and well, she’s classily sultry! 😀 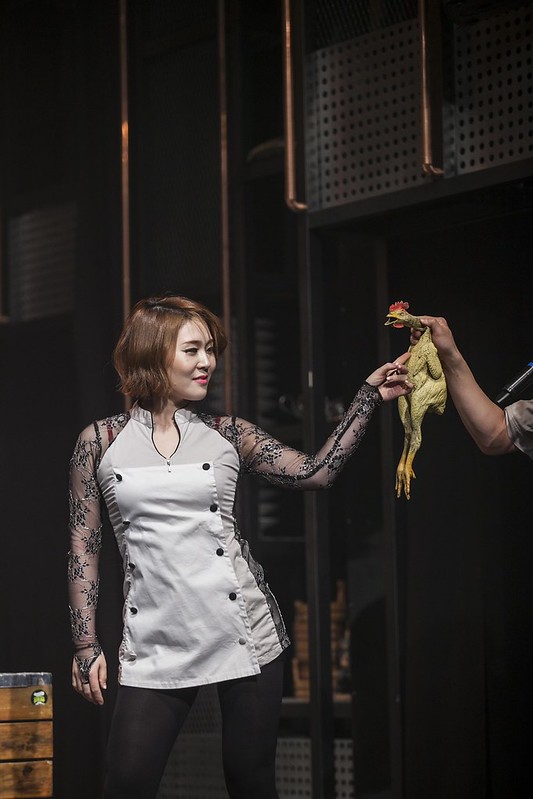 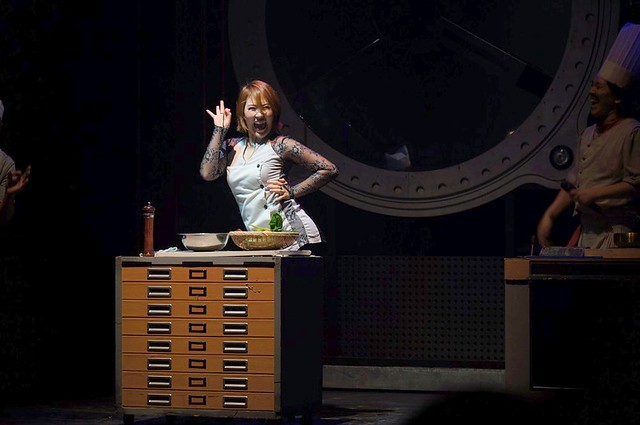 The show opens with the set up in a kitchen where chefs make a variety of dishes as orders come in. They happily prepare Chinese, Japanese and Italian dishes.
Finally, when the kitchen receives an order of ‘the best bibimbap,’ the two rival sous chefs compete in a bibimbap cook-off.
Their dishes are judged by a randomly selected audience member, who then determines which chef stays in the kitchen to carry on the legacy of making the best bibimbap. 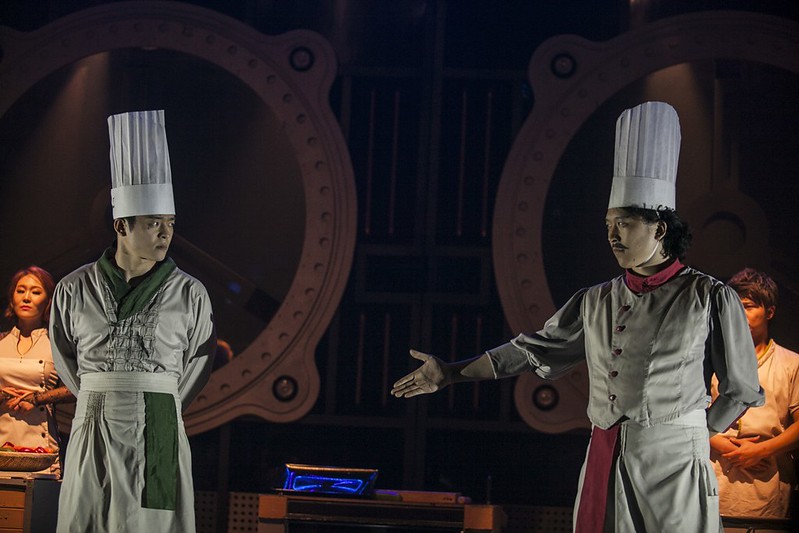 Yes, that was the unexpected part.
At certain parts of the show a member of the audience would be pulled up to join in the fun on stage! 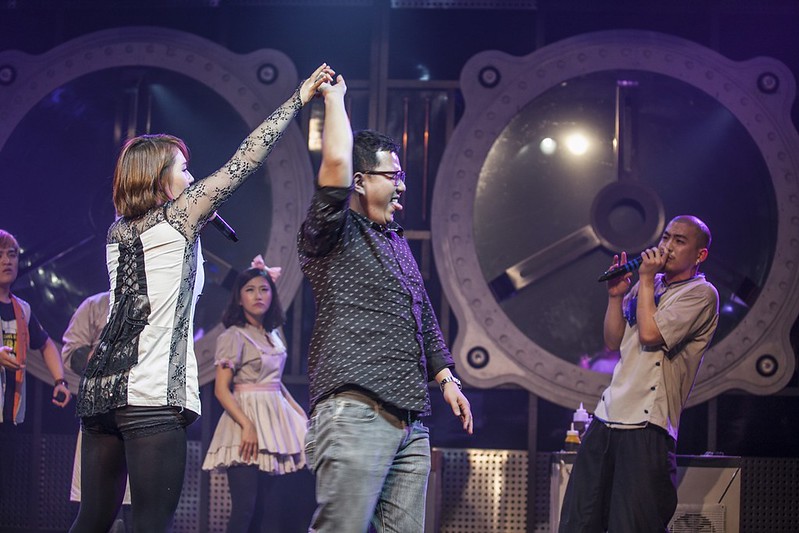 I won’t let you know exactly when as it might spoil the fun for you if you’re planning to watch it, but guess what?
I was selected to get on stage during the preparation of the best PIZZA! 😀 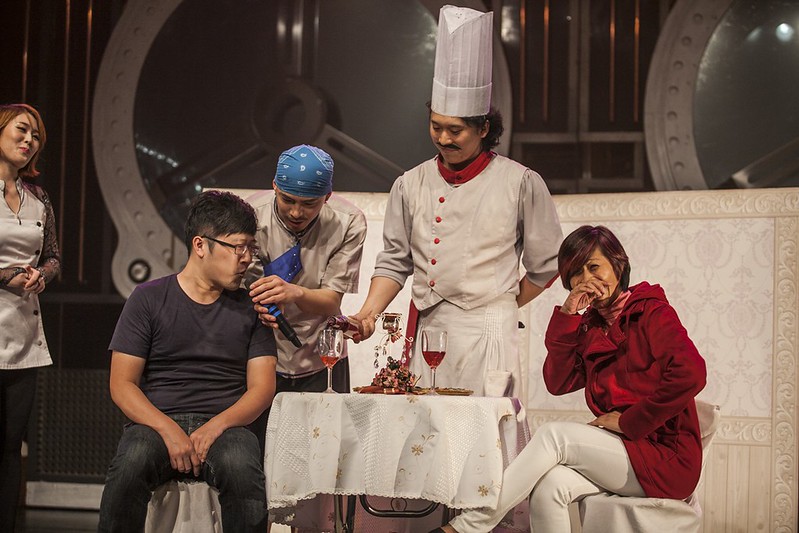 If you’re ever called up just be sporting and go up the stage ok?
As for me I certainly didn’t mind any form of attention so I went up happily. LOL. 😀 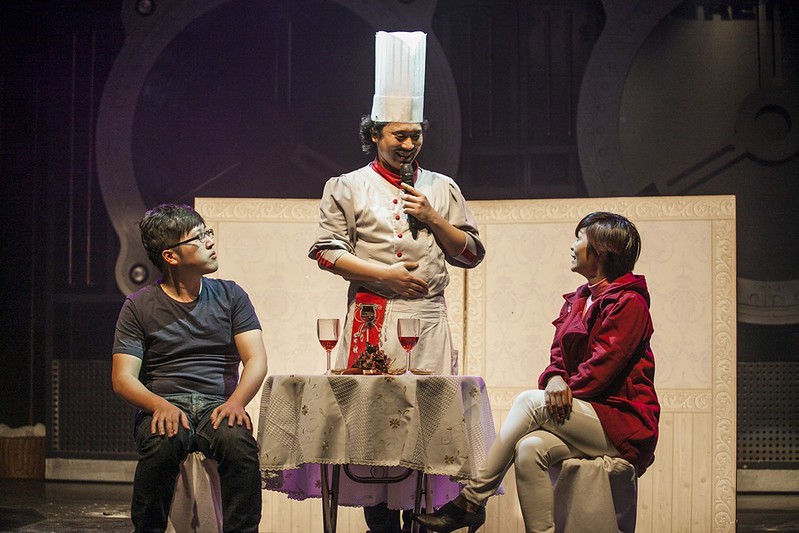 The other guy that was called up for the male part was as sporting so we had fun. We didn’t know what to expect but we played along fine.
It was a full 20 minutes on stage and boy it was crazy; I was apprehensive yet happy as I prayed hard that I didn’t have to do anything silly. 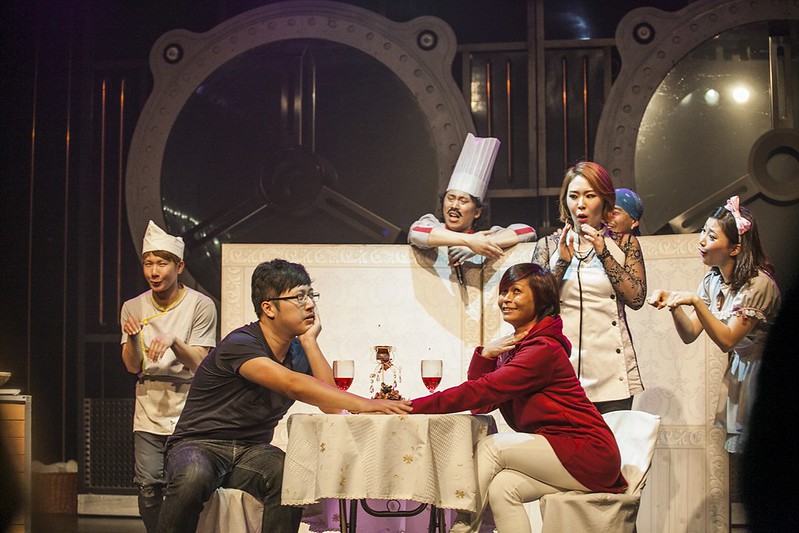 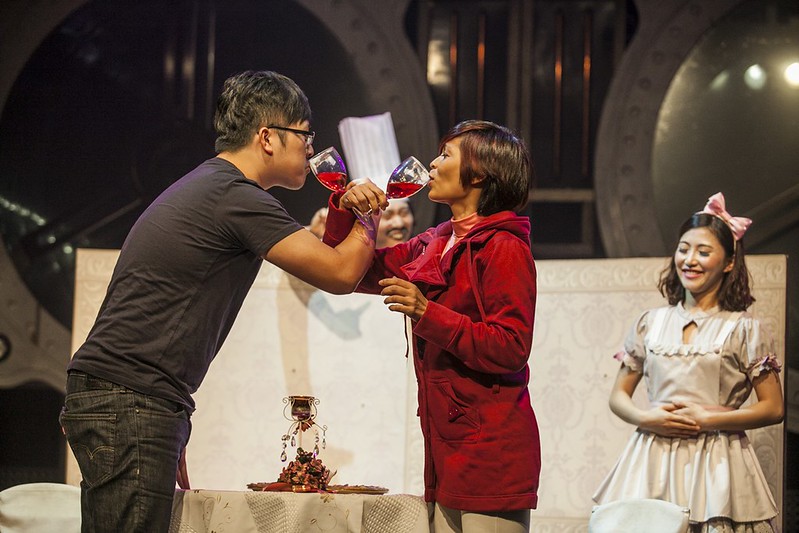 But luckily we didn’t have to do anything too complicated so all was fine!

‘BIBAP’ is a performance in which sonic entertainment, comedy, music and dance all came together in dramatic yet harmony production, pretty much like a good bibimbap dish.
It is a show enjoyable by all ages and nationalities; the language of comedy is universal and the content is clean and fun. 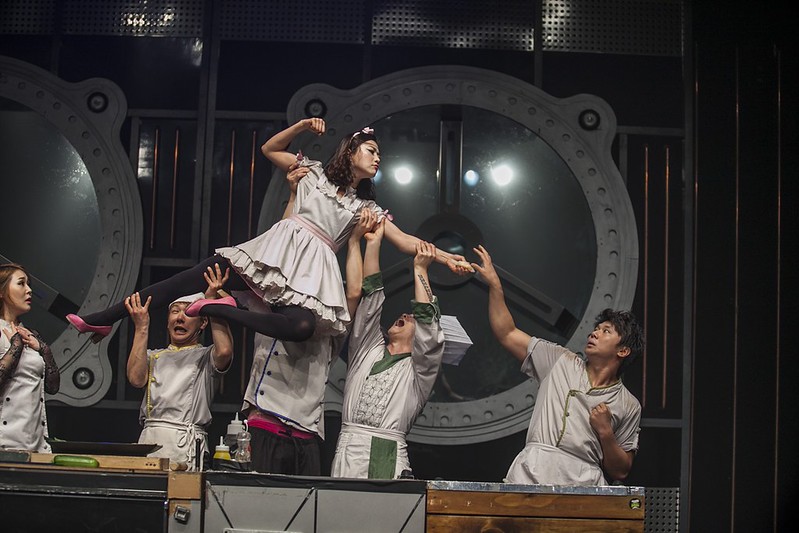 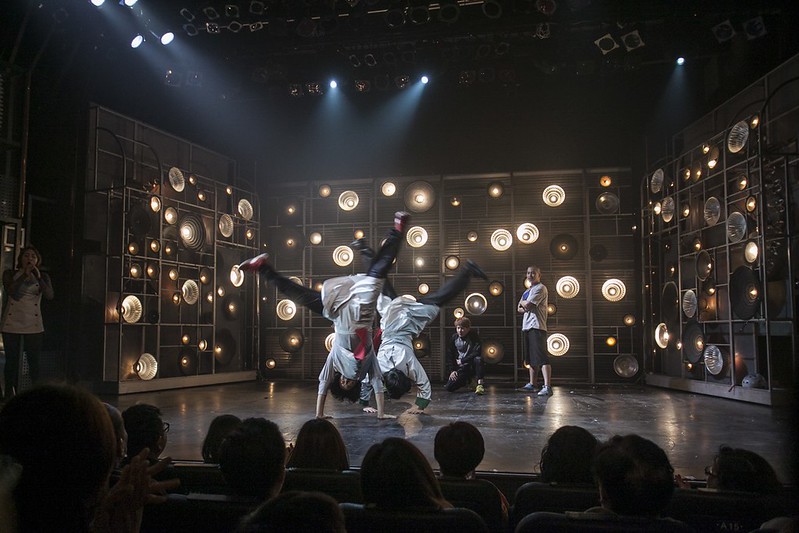 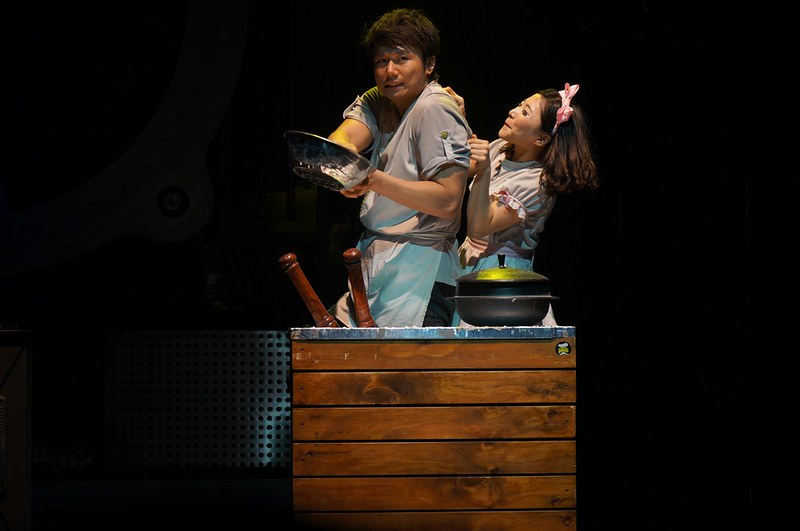 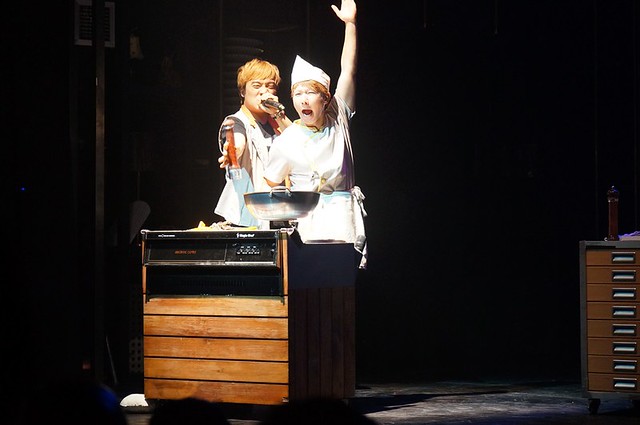 This is a performance that encompasses so much energy, spirit and talent that it is simply, simply amazing! I guarantee you that watching this is such an absolute joy that has the audience of all ages cheering, clapping, gasping, laughing and generally experiencing a wonderful hour packed with brilliant comedy, acrobatics, breakdance, beatbox, a capella, martial arts, mixed media and cooking. 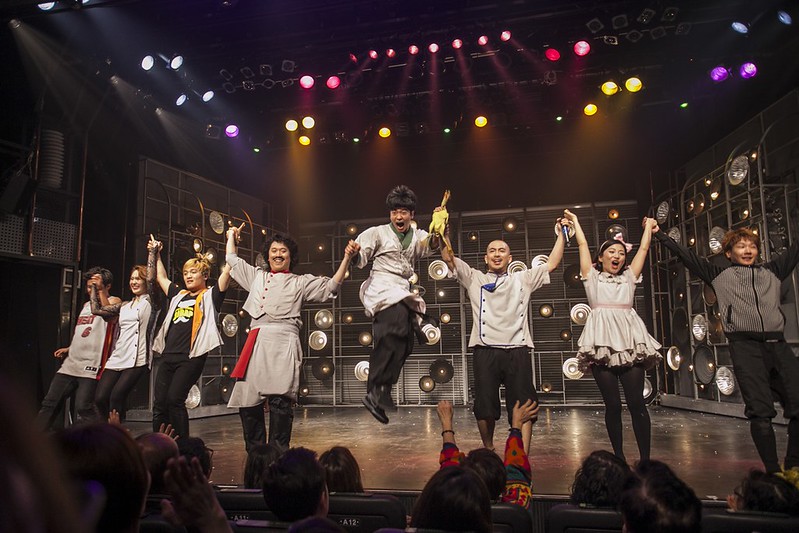 BELOW: A picture with the cast! 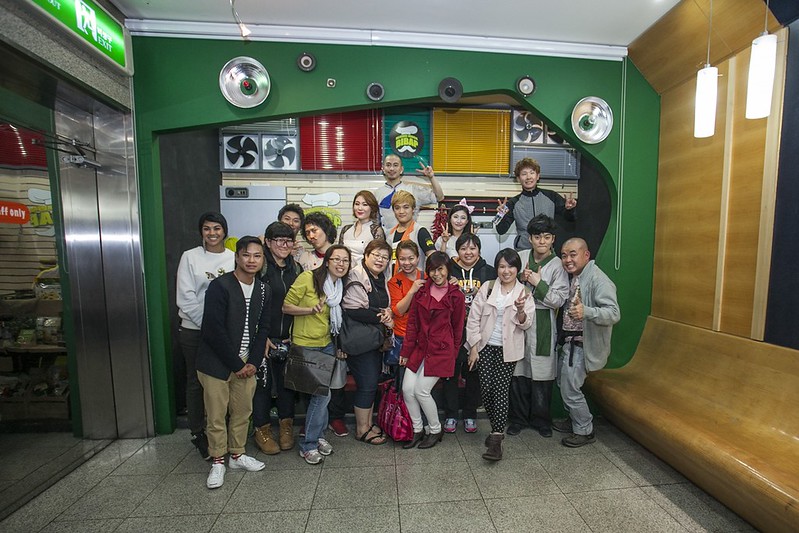 **This wonderful experience was part of our itinerary during our Korea Wondrous K-Beauty media familiarization trip organized by Korea Tourism Organisation.
Thank you KTO! 😀 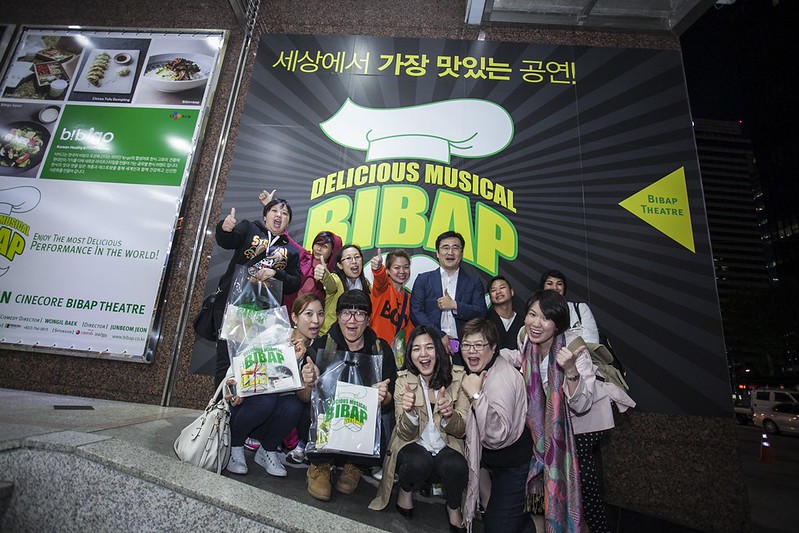