I have learnt to manage expectations and adjusted my palate accordingly for Japanese food here in Malaysia. I have learnt to accept that the wonderful cuisine of Japan would somehow not match those of what I had sampled in Japan or even some of our neighboring countries.

In fact, even a franchise ramen joint like Ippudo fell out of favour for me when compared to its sister outlet in Singapore, so don’t get me started about ramen in Japan.

Now, with these expectations in check, I still can somewhat enjoy Japanese food in KL. I have not been to many or all of them; that much I admit so who knows what future Japanese food hunts or new Japanese joints might offer?
And with that in mind, I remain hopeful that one day I won’t have to make my annual Japan pilgrimage for my Japanese food fix. 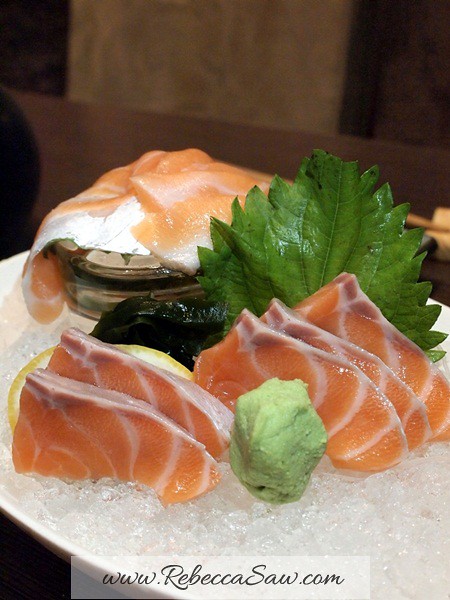 Usually when asked for recommendations of Japanese food around PJ (and I’m sure all of us get asked that a lot considering our obsession with Japanese food), I easily rattled off a few names – starting with Ichiro Sushi in Isetan 1Utama – a tad pricy but nothing that will bankrupt you, Hokano – a Japanese restaurant in Uptown that’s pretty decent without again, having to break the piggy bank and perhaps even Omitsu Koshi in Damansara Jaya, which is non- halal and satisfactory enough.
In KL, well, that’s a topic for another day.

Now I would like to add another restaurant to that list, one that I would say pretty value for money considering the quality.
Say hi to Mikan, who has uprooted from Maju Junction (hurray!) and is now a mere 5 minutes drive for us folks in TTDI, BU and The Curve. 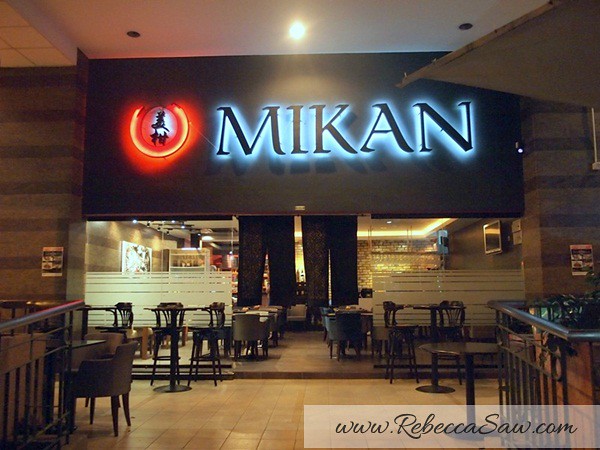 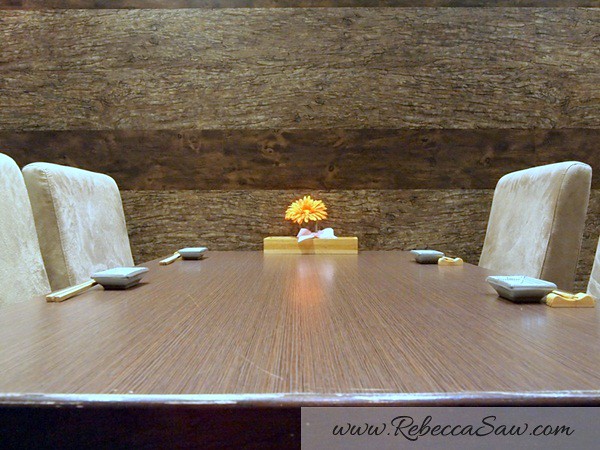 I have known the owner Casey for some time, and I’m familiar with his finicky tastebuds as well as his standards for the good things in life; namely gadgets, travel/accommodation and hot wheels.
That same standards was reflected in his establishment (or he does try) and the meal I had at Mikan Maju Junction few months back was as good as the one I had few nights ago in Damansara Perdana. 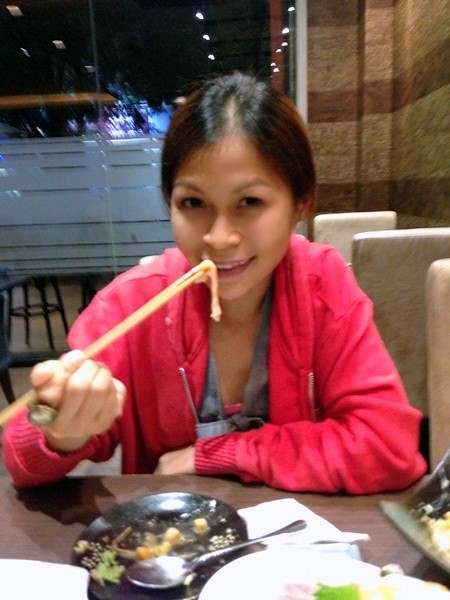 Now Mikan has quite an extensive menu; enough to satisfy a few visits without having to resort to the same old, but Mikan is known for seasonal specials and some that I would recommend to look out for includes the Matsusaka beef, but be prepared to pay of course.

Else stick to its budget friendly menu – cawanmushi goes for RM10, salads for RM15-20 and mains are RM20-RM30.

I’m a aficionado of fine food, and that night I was served the salmon trout – belly (RM32++) and RM26++ for the rest. I told Casey it could be better and to inform me when he has a higher grade stock coming in.
That said, the salmon trout was polished clean by my dining companion so rest assured that it is satisfactorily enough for its price. 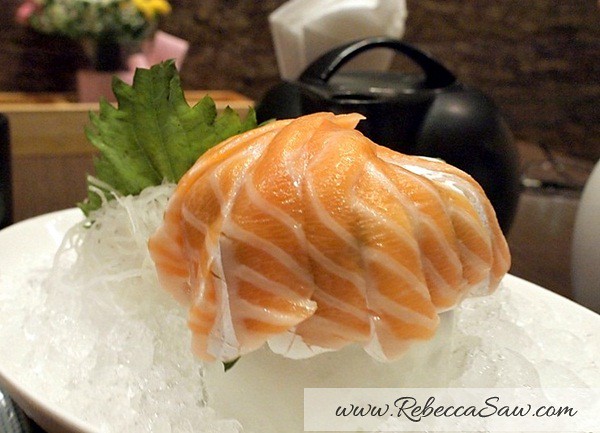 My pick for the night was the salad (was it the onsen egg that did the trick?) and the barbequed prawns. Fat and bouncy to bite, this was lightly grilled and coated with a little Mikan special sauce for flavour, though I thought it was good enough on its own. 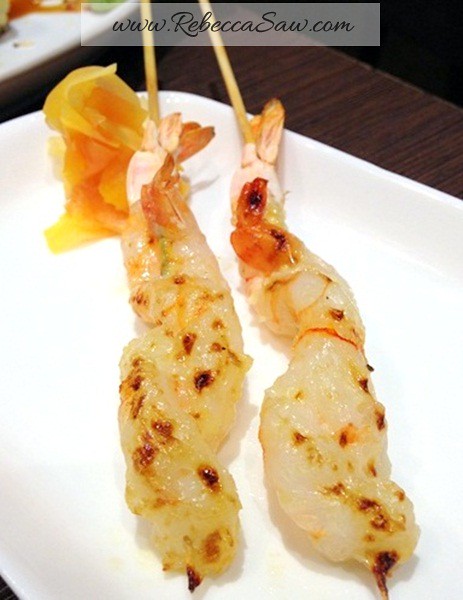 But back to the salad (25++), simply because I enjoyed it so much! It is in actual fact a meal on its own, with basil chicken, soba, an egg (have I mentioned that it was onsen?? Oh I did…) and loads of fresh crunchy greens. 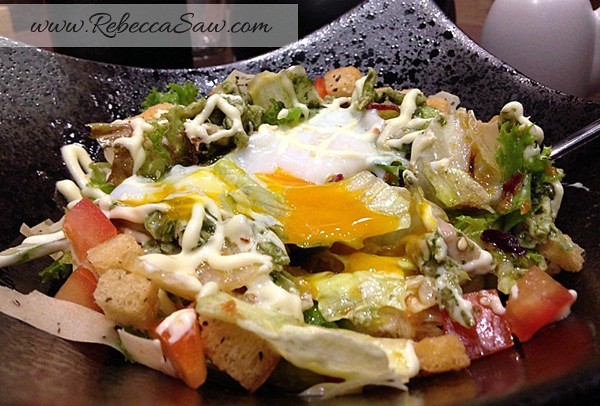 I specifically requested for scallops, and it didn’t disappoint. Do note that I like my Japanese food minus any mayonnaise or any form of sauce/cream, so I had wiped off the sauces for both the scallops and the prawn maki (Mikan’s Dragon Roll (RM28++)) and enjoyed every bite in its naked form. Frankly, it was good enough on its own anyways! 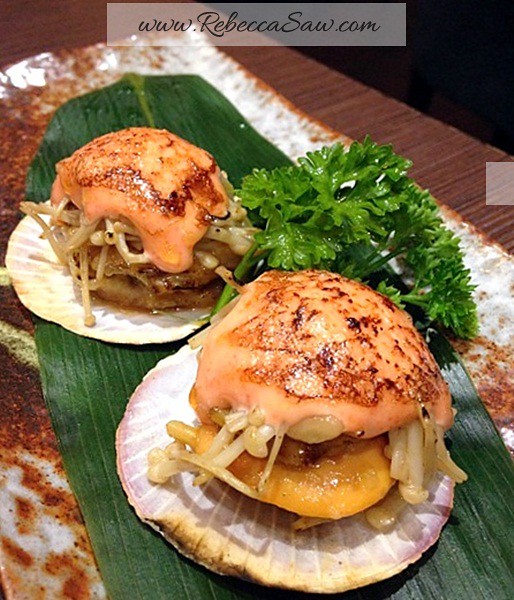 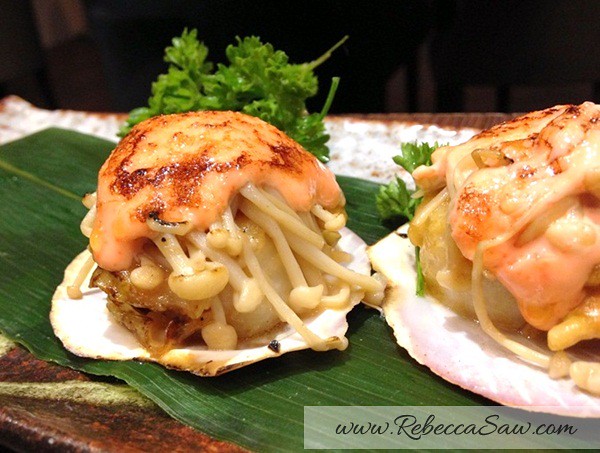 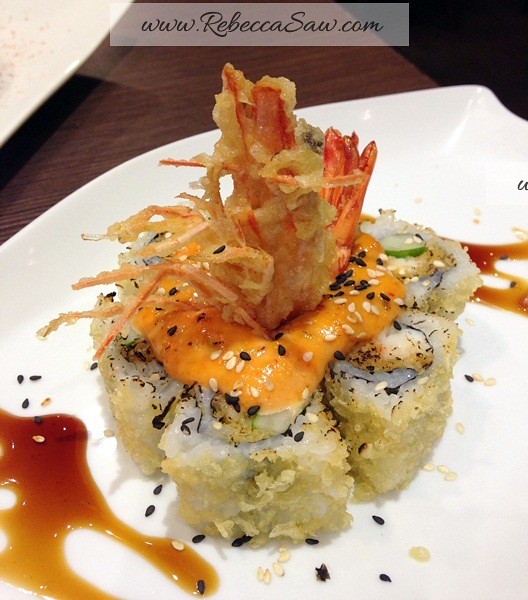 And now, perhaps the most exciting creation here – the braised pork belly topped with crunchy pork lard  (RM28++) ! An oriental Japanese innovation, this sakura pork was tender and flavourful.
A lard or pork lover? Make sure a platter of this is on your table! 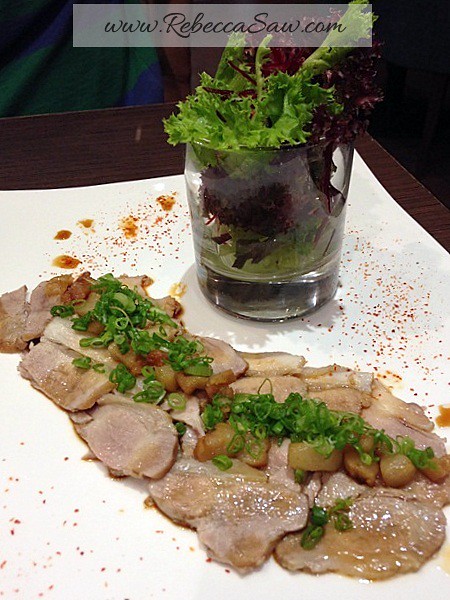 Sadly enough there aren’t any exciting dessert for now and I had to make do with a green tea ice cream. But as I’m writing this post, Mikan’s new menu is in print and I have 3 other friends (KC, Kevin and Liew) who’s keen to re-visit with me!
So I’m looking forward to sampling its hot menu, especially the noodles and teppanyaki. Anyone else who would like to join us? 🙂 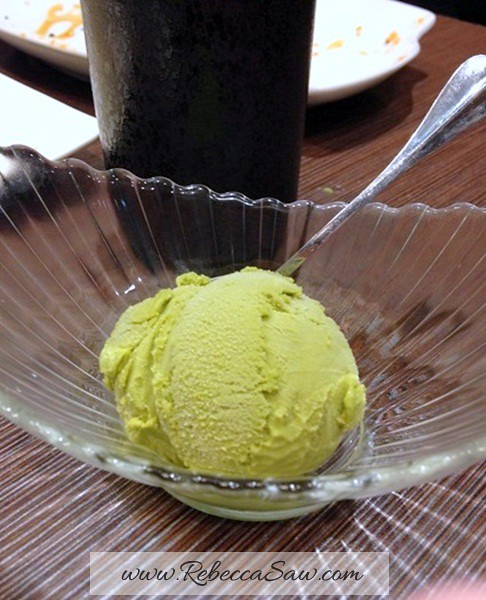 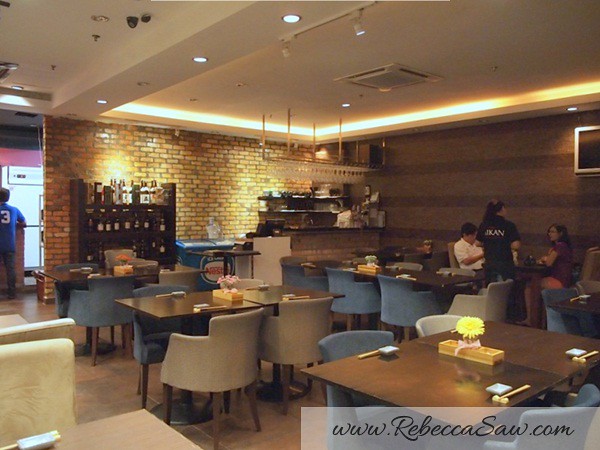