It was an educational and a magnificent dinner session with Chef Alexander of The Restaurant at the Club at the Saujana Resort last week. His passion and his conviction to serving the best cuisine within the best of his capability was something I noticed and admire when I first met him last year. Another dinner followed (the Michel Rolland wines pairing) and his attention to detail and skillfully crafted menu shone again. 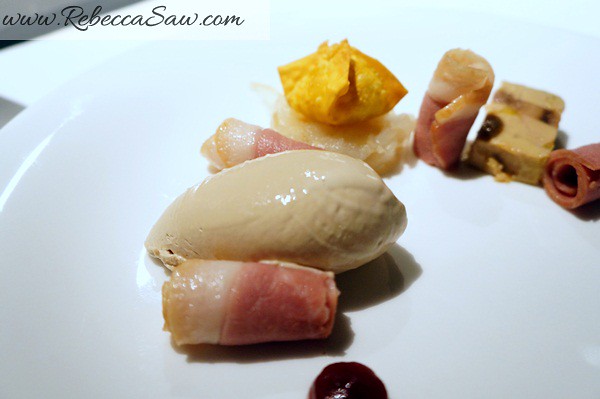 Today I’m back for another MIGF session, marking a year since I have met Chef Alexander. I saw changes in his ala-carte menu so I’m happy to note that he’s not just working hard on the MIGF menu. *Hahah, I jest.* 😛 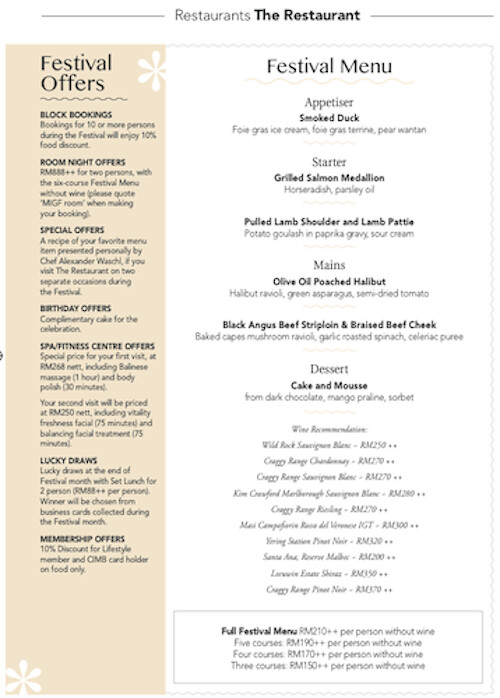 I like how Chef Alexander kept his food “real” minus the theatrics. Every item on the plate is edible (no decorative flowers here or pointless glob of foam), properly thought of to pair with the other elements on the plate and all cooked just right, from the seafood to the vegetables and the meats.

That may seem basic in writing, but I have had enough experience dining out to tell you that not all restaurants or chefs gets it right.

BELOW: One of the mains for The Restaurant’s MIGF 2012 – The Black Angus Beef Striploin and Braised Beef Cheeks. The red hue of the striploin sent shivers down my spine 😛 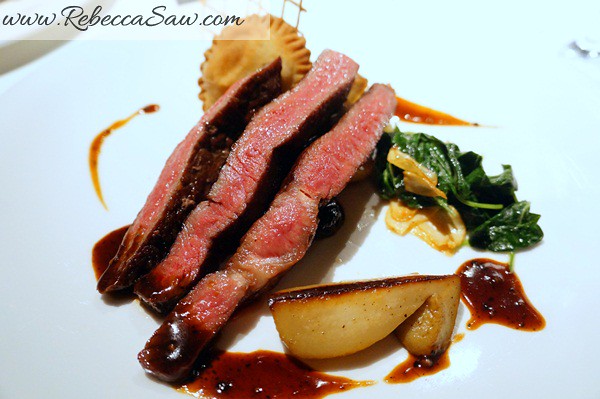 When I prepared my MIGF 2012 Gala Launch post, I read through the menus of the participating restaurants and one of the reasons The Restaurant @ The Saujana Resort’s menu stood out was the foie gras ice cream.
And I”m so lucky to actually be able to spoon it up into my mouth to savour the decadent creaminess and the cold as it slithers down my throat. Ice cream may not be something conventional served as an appetiser but that’s Chef Alexander for you, surprising at times yet skillfully he ensures each component of each dish works. 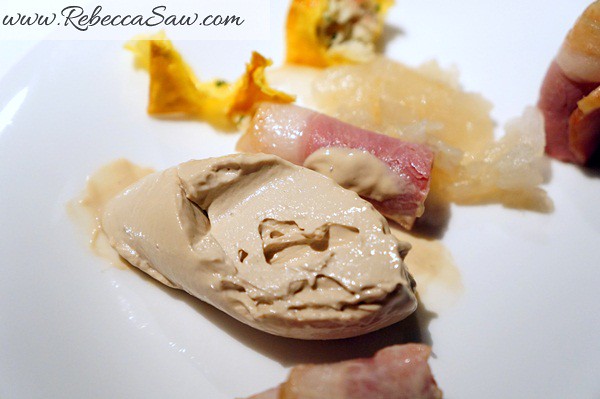 For MIGF 2012 this year, Chef Alexander has put much thought into designing his dishes. While the theme “Classical Chefs” were hardly reflected in some of the other menus, for The Restaurant it is clearly defined in the preparation of each component in every dish.
From the start, his appetiser showcased smoked duck, ice cream and terrine. Smoking has been a long and classical way of preparing food since the olden days. The same can be said for ice cream, terrine and as for the wantan (dumpling), which is deep-fried; another classical method of cooking. Terrines are popular in Europe and made via bain-marie method (water bath) which then preserves wonderfully after its chilled.

This is his pear wantan, which didn’t taste like pears at all, and it sits on a low timbale of sweet luscious pears, delicately cooked and still retaining  its crunch. 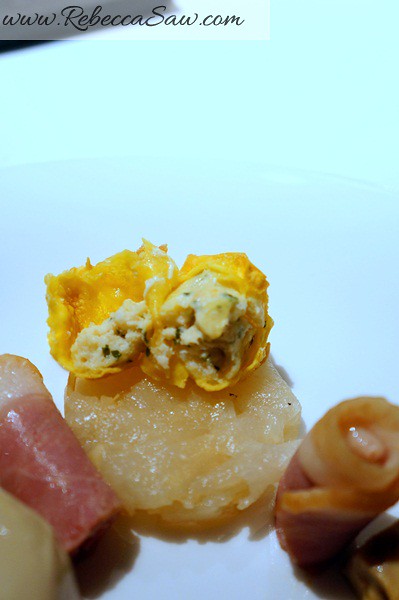 When queried on what wasn’t classical, he named sous vide, molecular and espuma as examples. And thus I hope you have got the gist of his message by now?

Basically, it meant that Chef Alexander’s MIGF menu are prepared via classical methods of cooking and none of the fancy mumbo-jumbo that’s so fashionable nowadays. However, that wasn’t meant to imply that molecular and the likes are bad; and as a chef, Chef Alexander respects all methods of cooking, it’s just that for his MIGF menu this year, he’s keeping strictly to the theme.

BELOW: Next course: Grilled Medallion of Salmon. 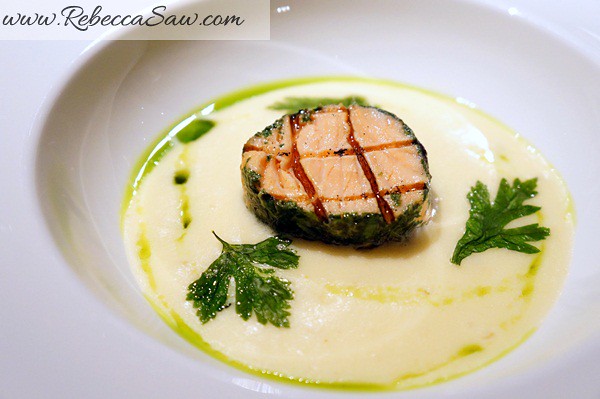 Besides raw and fresh salmon dipped in soyu and wasabi, my ideal salmon should be cooked in this EXACT manner. This wonderful medallion of salmon was pink inside, sealed with flavour with a ring of assorted herbs as its “crust” and sits in a pool of light, frothy but very tasty horseradish “mousse”. I can’t call it soup per se as it wasn’t runny liquid.
Subra the manager shed some light on this; saying it was Hollandaise sauce whipped and thus its frothy but with substantial volume and weigh so you can still taste its flavours. 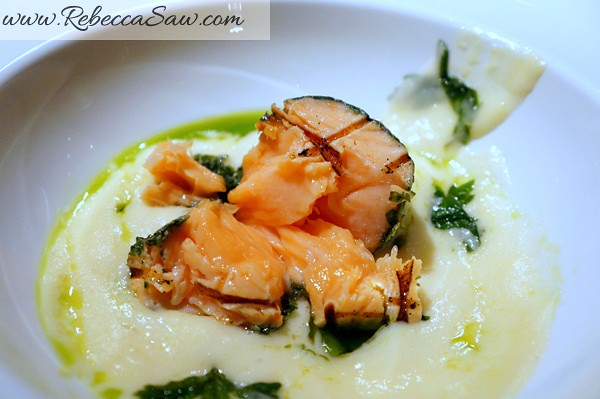 I love my lamb and whoever who still doesn’t know that by now is obviously not a friend of mine. Ok, just joking. 🙂
Anyhow, “pulled lamb shoulder and lamb patties” are akin waving a red rag in my face. Having had popped one into my mouth at the MIGF Gala Launch, I couldn’t wait to have more of it tonight. 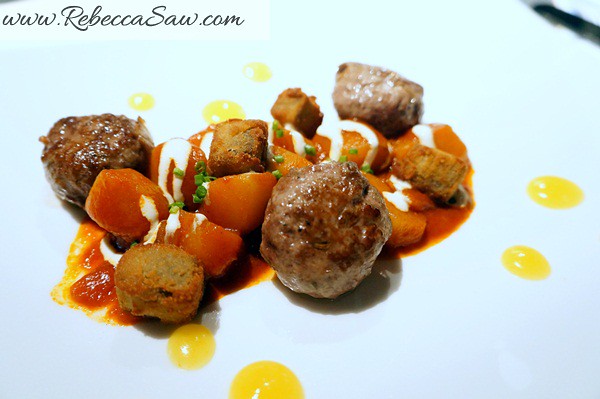 Surprisingly it was the pulled lamb shoulder that took the limelight.
Quoting my dinner partner, this tasted somewhat in between a croquette and a crouton. Unconventional again, as it wasn’t visually as expected of a “pulled” meat dish, Chef Alexander pulled lamb shoulder came in crispy yet juicy cubes. It was in fact, prepared like a Schnitzel; a popular and again classical dish of Austrian/German heritage.  The sides of potato goulash, the sauce with paprika powder (among other ingredients) and the drizzle of lemon cream completed the dish. 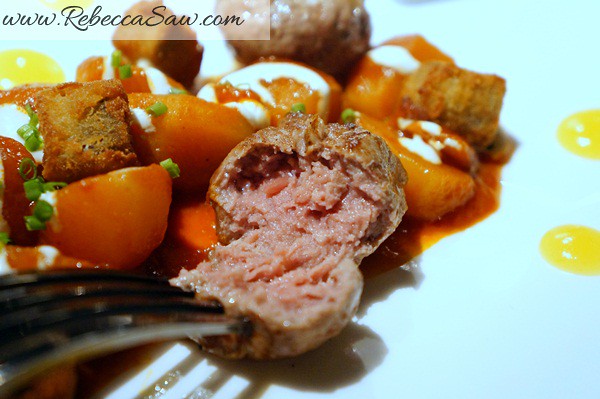 The dish that didn’t had me wiping the plate clean was the Halibut. That was sad as I love fish and I love halibut. Much detail and effort went into the halibut ravioli as the fillings were halibut flesh carefully stripped from the bones of the fish. That probably explained the strong fishy taste!
These flakes were then poached in milk and washed before cooked again in milk, thyme, sea salt and other seasoning that I wasn’t able to note down as fast as Chef Alexander spoke. I think its time I start recording him over my dinners here! 🙂 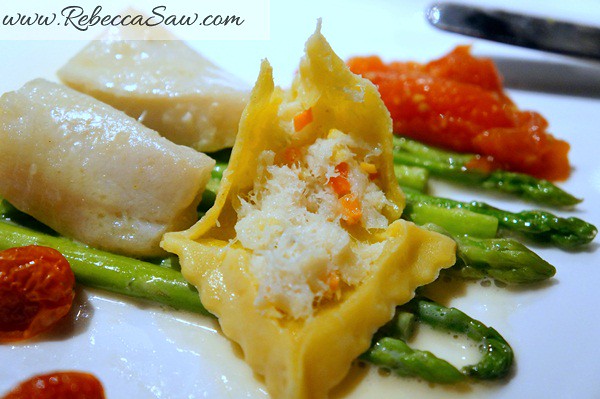 Sides of this halibut dish was sun dried tomatoes and tomatoes chutney, which I loved. Both the actual pieces of halibut was kept simple by poaching in olive oil. 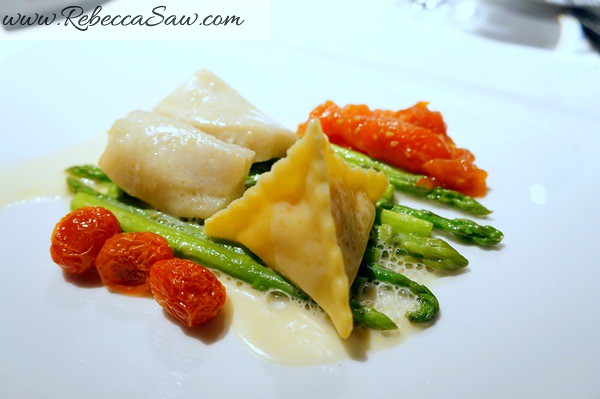 The meats finally made its appearance and though I was stuffed by then, I eagerly dug into it. 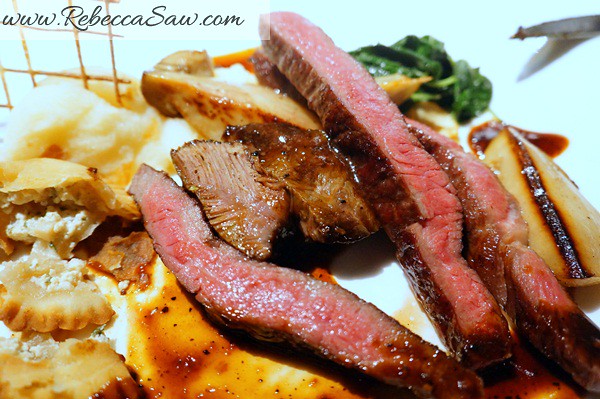 And what can I say? It was superbly executed. The beef cheeks achingly fork tender, the striploin lean but succulent and the cape mushrooms sweet and juicy. The celeriac puree? Heavenly smooth!

Desserts finally made its way to my table and Chef Alexander came around to spoon a lovely scoop of homemade mango sorbet for us. 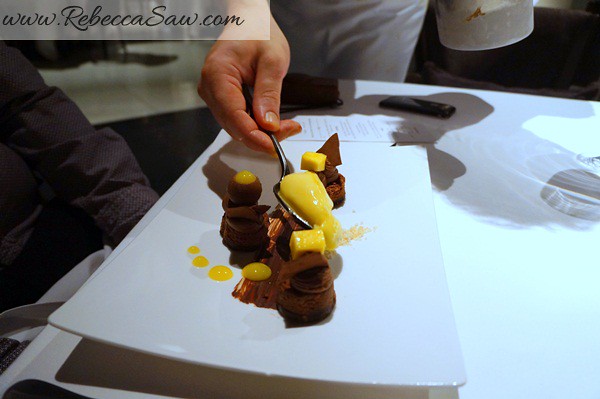 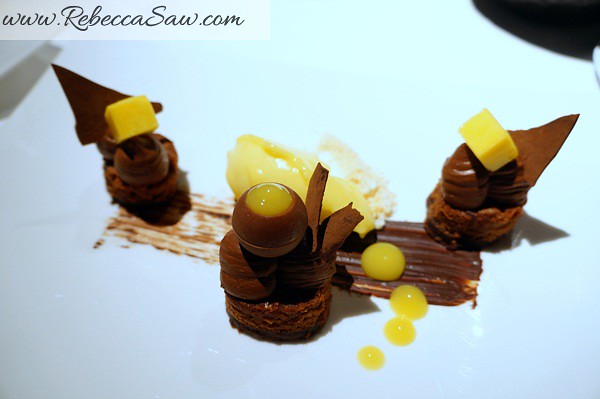 And to spoil us further, he went back into the kitchen and prepared another dessert that he has been experimenting with – Chocolate and Champagne Mousse with Rose Jelly . The chocolate was 64% percent coco and served oozing hot with a hint of chilli. A glass of Moët and Chandon went into that tiny piece of tiered cube that made up the Champagne Mousse and Rose Jelly you see at the side. Yes, a whole glass! 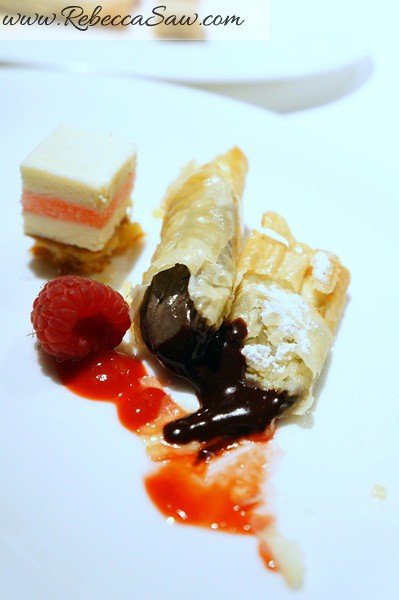 The MIGF menu for The Restaurant starts from RM150 – RM190++/pax depending on your selected number of mains and RM210 if you wish to sample everything I had.
My recommendation? A minimum of 4 courses for RM170++ and be sure to select the beef as your main! 🙂

Conclusion?
A superb value for money MIGF menu in comparison with the others (you can check out the full list of menus HERE) & for the portion and quality of food served, this is a real steal!
This post actually only captured half of what Chef Alexander shared over dinner. It would be twice as long if I updated on how he prepared every item on the plate.
If you wish to know more, hop in for a meal here at The Restaurant, his lunch and dinner menu are just as promising and have a chat with Chef Alexander. He’s one chef in KL that you’ll have to meet! 🙂 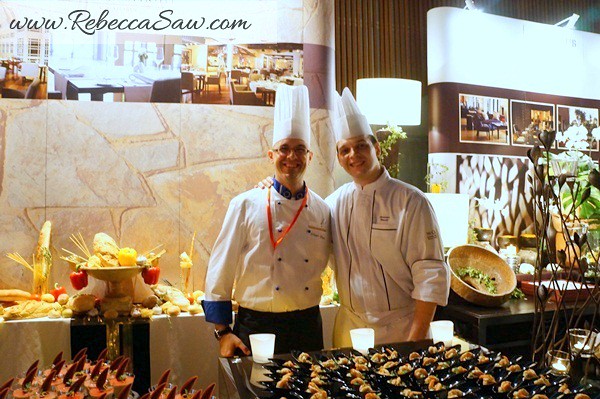