Roti Babi isn’t something common.
In Klang Valley one of the VERY FEW places that offers roti babi is Yut Kee and POKC at Damansara Uptown.
Unfortunately the version at Yut Kee is a dismal thick pocket of bread with little meat and some onions. POKC’s version was better but expensive.

Back in Penang I grew up eating the roti babi at Song River Cafe, Gurney Drive and though I remembered it was greasy, the fillings were the bomb.

I haven’t visited the stall since I left Penang more than a decade ago and when I went last month I found out that I’ll never be able to enjoy the roti babi again. 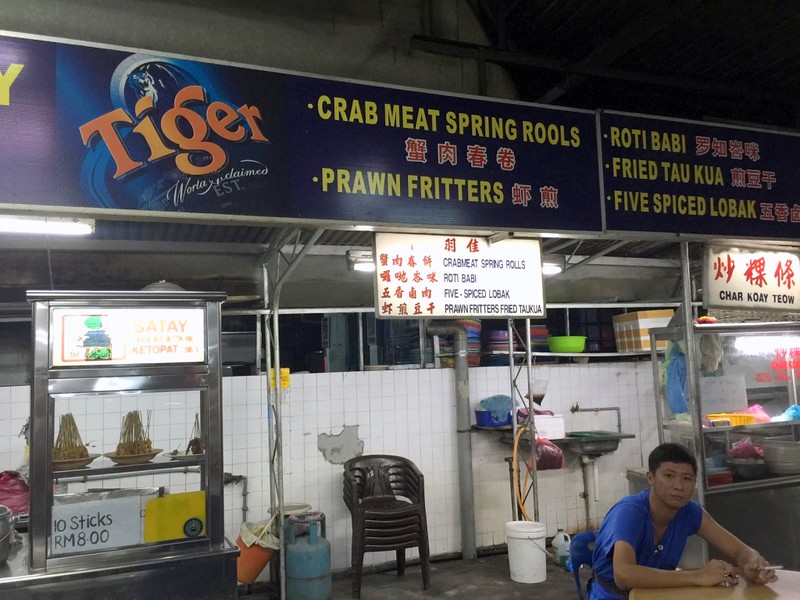 Now, I’m aware that there are many old Penang favourites of mine that will eventually “extinct” one day if there are no successor to the business.
Fortunately some old names are thriving, like the famous wantan mee at Pulau Tikus, while some, like this uncle, had retired for good.

I stood in sadness and tried my luck asking the other hawkers where he went. “He has retired for good”, they said, leaving no doubt in my mind that “the roti babi at Song River” is forever gone.

Before I continue, let me provide some enlightenment about this Hainanese favourite.

Roti Babi with Worcester Sauce (Lea & Perrins) aka ‘ang moh tau eu’ – the white people’s soy sauce as it is commonly called in Hokkien; is basically “french toast” with minced pork meat with cabbage, carrots, onions, mushrooms and crabmeat.
There are a few versions, but minced pork and crabmeat are the 2 key ingredients.
The fillings are cooked first and then stuffed into thick white bread.
A slit is made on one side of the crust and the mixture carefully stuffed inside. The bread is then coated with beaten eggs and deep fried until golden brown.
The type of bread is important. It should be white bread that is fluffy and light.

Since I was in Penang for a week this trip, I continued my quest to find this snack around the island. I posted the picture above on my FB, and had quite a few recommendations.

One of it was Mary’s.
I went to Mary’s once and back then it was a stall in Padang Brown that goes by the name “Mary’s Hot Bread”.
You can read about that 2009 visit HERE.

This time I saw her again at New Cathay Coffeeshop in Pulau Tikus.
I recalled that I didn’t quite like her roti babi but since that was a while ago I thought I should try it again.
Besides, I need fresh pictures for this post.

The stall: (image taken on one morning when it wasn’t open, so I returned the next day when she was in business) One portion as below is RM3.80 (or was it RM4.50?).
It wasn’t bad taste-wise, but the roti babi I’m familiar with is coated with beaten egg while hers was coated with breadcrumbs.
The breadcrumbs altered the humble roti babi to a somewhat “modernized” version, which I didn’t really approve of.
The accompanying sauce was dismal as well, very vinegar-ish and I doubt there was any Lea & Perrins added.
However, I had to admit that it was tasty. If you are not a traditionalist like me, just enjoy it as it is. 🙂 2. CHUAN BEE Cafe, China Street.
Chuan Bee’s version is perhaps the most “authentic” of the lot here.
I arrived about 11.30 am on a Saturday and the restaurant wasn’t ready for business yet.
I was dismayed, as it was my last day in Penang and I desperately wanted to try their Roti Babi.
Determined, I knocked on the steel gates, and with luck, a lady opened the door. I started to sepak in Hokkien, a tactic I knew would warm any fellow Penangite up, and true enough, she said that an individual order of roti babi is not a problem, even though they are not open for the day.
She allowed me in and went into the kitchen to prepare my roti babi immediately.

Thus I sat alone in the old shop and waited in anticipation for my roti babi.

Looking around the shop bought back flashbacks of my years in Penang… oh, so much has changed! I’m glad I’m still able to visit and enjoy the food at these old establishments but I wondered, just like everyone else, how long more before they are gone too? Being the busybody that I am, I peeked into the kitchen and saw the old aunties preparing for the day and frying my order.
Nope, definitely no foreign workers here. After 10 minutes or so the aunty came out of the kitchen with my order.
The roti babi is RM3.50 (or was it RM3.80?) per portion.
Since I was alone, and I speak Hokkien, the lady spared me some time and we chatted for a while.
She said the sauce is a secret concoction, but assured me it is as authentic as a Hainanese version of roti babi and sauce should be.

I personally rate the roti babi decent, but isn’t particularly rave-worthy.
I tried to identify the fillings and could make out the pork, carrots and onions.
Out of all that I’ve tried in this post, Chuan Bee’s version seems most traditional. But of course, Chuan Bee isn’t just about the roti babi. This generations old “kopitiam” is a Chinese chu-char/zhu char popular for its fish and pork dishes.
For my next visit I’ll definitely be ordering the Hainanese Pork Chop! Where is Chuan Bee?
It is on Lebuh China; look for the light green gates as below. No conspicuous signboard but just a small black one with the name “Chuan Bee” above the gates. Because this roti babi has turned fowl and transformed into Roti Ayam. Yes, the signage proudly proclaimed it to be roti babi and I got a shock when I was told it was roti ayam instead.
Anyhow the trip to Pulau Tikus market was made, so I gritted my teeth and ordered one anyways.
I am also a sucker for choon pneah (spring rolls) so I added a roll to my order. The roti babi, errr.. I meant roti AYAM was…. ok, but just not pork.
To be frank, if you look at the fillings for both the spring rolls and roti babi.. I mean roti ayam, you would conclude that both has similar fillings. The spring roll skin is thick and crunchy. I won’t say it was bad, but just not I had expected. Since both tasted similar (one with crispy skin and another in bread), I couldn’t stomach the whole plate and decided to head elsewhere to numb my irritation.
The 2 sisters are friendly and when asked, they said yes, they were indeed from the famed Senior Citizen Club which was famous for its roti babi.
Unfortunately the pork version doesn’t sell well, so they had since converted it to chicken instead.
Frankly I’m confused. How could a pork version not sell well?

I have missed out on the below and will be visiting them on my next Penang trip:
4. CRC Cafe (recommended by some friends)
5. Han Onn at Burma Road (not sure if still available)
6. Nyonya restaurant at Summerton
7. Anywhere else?