I haven’t been to New Zealand. The closest I get to “experiencing” New Zealand was eating a lot of kiwis, drinking New Zealand milk and consume New Zealand cheeses. That, and watching Lord of The Rings. 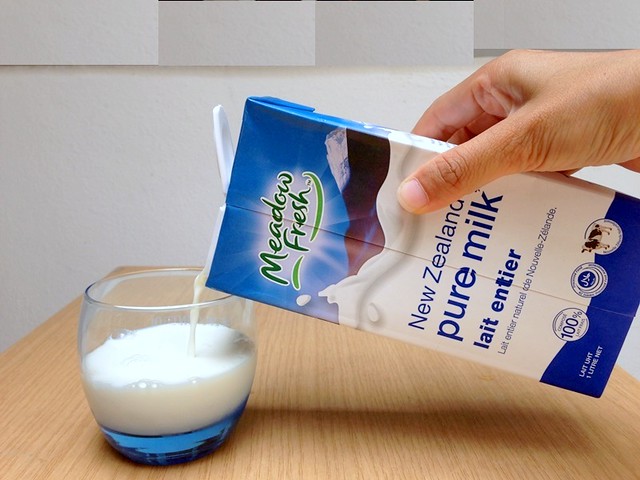 I spoke to Kim Walbridge of Air New Zealand during my involvement in DIA Tourism Conference earlier this year.
He regaled us with tales of beautiful NZ, of diverse and unspoiled natural beauty which includes jagged mountains, beaches, pristine lakes, rivers and great outdoor activities. Being an active social media person I was very much taken by the Air New Zealand – Safety Video, which won “Most Inspiring Content” in the DIA Tourism Awards 2013. 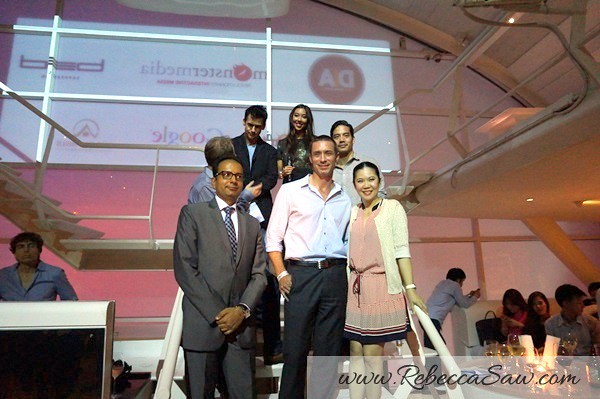 If you haven’t seen the video (WHAT??), you can watch it here.

At the launch of Kapiti Matt Ritchie, the New Zealand Trade Commissioner extolled the virtues of New Zealand again – “When you want to feel a sense of the land and the people of New Zealand, Kapiti ice cream invokes the senses of a sunny day overlooking the beautiful New Zealand landscape. Its distinctive taste comes from the use of real fruit and natural ingredients from New Zealand,” said Mr Ritchie. 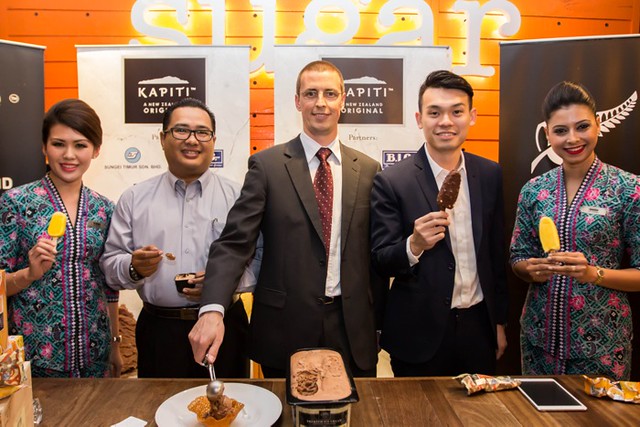 Indeed. Though I had to make do with rolling on the field of my neighbourhood (don’t worry, I did check for ‘doggie nuggets’ before lying down) instead of the pristine NZ meadows, I ‘tasted’ New Zealand; rich, creamy dairy as the base of the ice cream and the freshest ingredients from New Zealand used in its many variants – from the honey, plums, berries and figs. 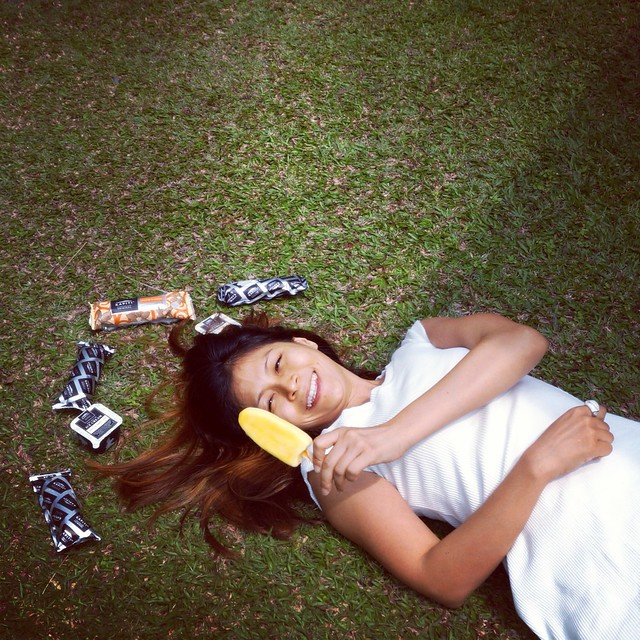 The very basic flavour; vanilla was speckled with the seeds of the vanilla bean and their presence is often a marker of natural vanilla ice cream. Tastewise it was wonderfully perfumed with vanilla. The other that I tried; the chocolate has a good balance of milky consistency and cocoa flavour.
At home I opened the Black Doris Plum and Creme Fraiche for a pick-me-up during a particular stressful day and was rewarded with a sweet almost tangy sensation on the tongue. Swirls of white creme fraiche imparted a rich and tart flavour to the ice cream.
If you not aware, Black Doris Plums are popular plums farmed in New Zealand. 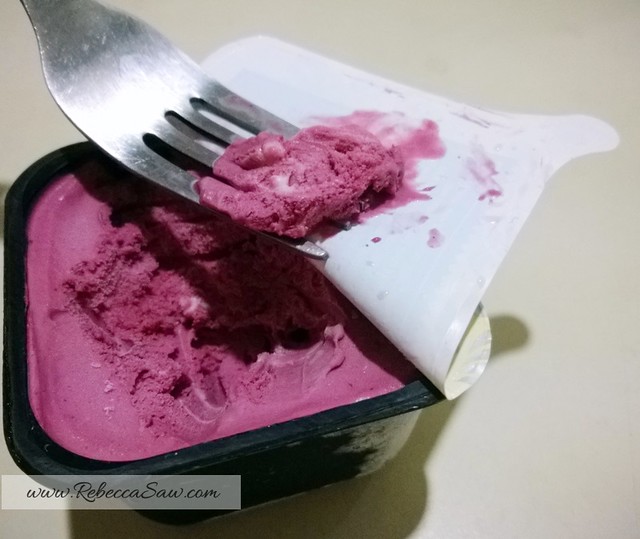 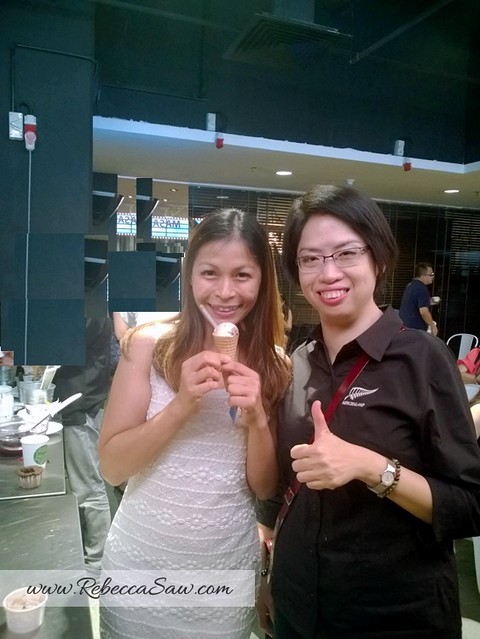 Overall the ice cream tasted like what ice cream should be; creamy, milky, non-cloyingly sweet or overly flavoured and gratifyingly rich. Unlike our locally manufactured ice creams, Kapiti ice cream has none of the terrible ‘waxy’ texture or coming across tasting almost like iced wet flour (ok, I can be harsh when it comes to food).

While I’m a fan of New Zealand Natural, the newly Kapiti ice cream is obviously of another level of quality all together. As shown below, the Colmar Brunton Brand Tracking shows the steady growth of love for Kapiti, compared to its competitors Movenpick and New Zealand Natural. 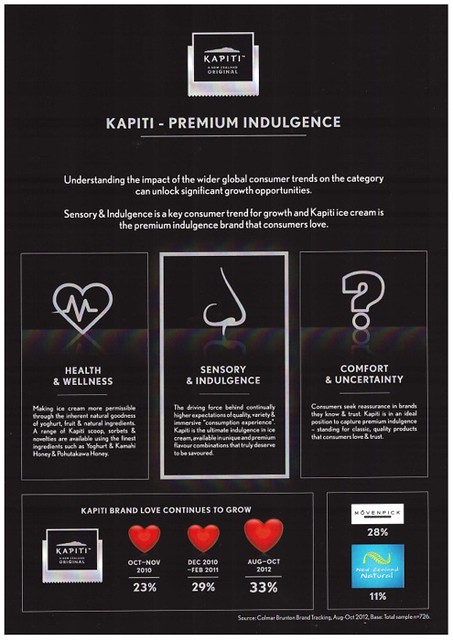 So what are the flavours available in Malaysia?

And the most important question of all – where to get your grubby hands on some Kapiti love!
Buy at:

Note: This is at Ben’s Independent Grocer in Publika 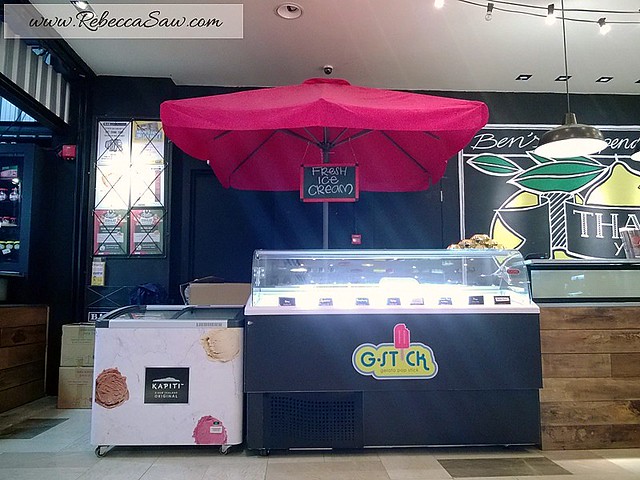 Let’s hope for more flavours to be bought in by the sole distributor of Kapiti Ice Cream in Malaysia; Sungei Timur Sdn Bhd soon. As you can see below, there are more than 20 flavours of Kapiti! 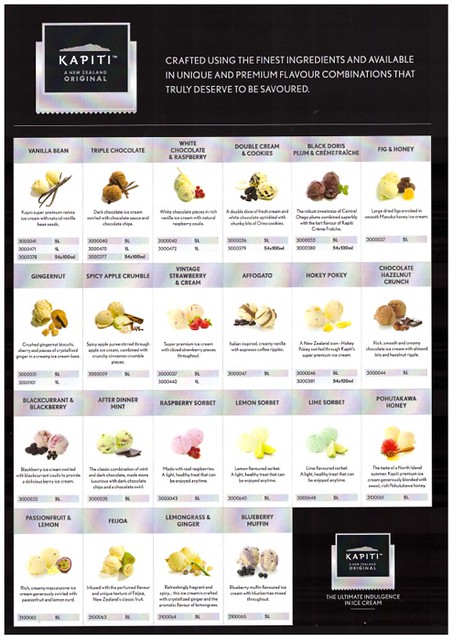 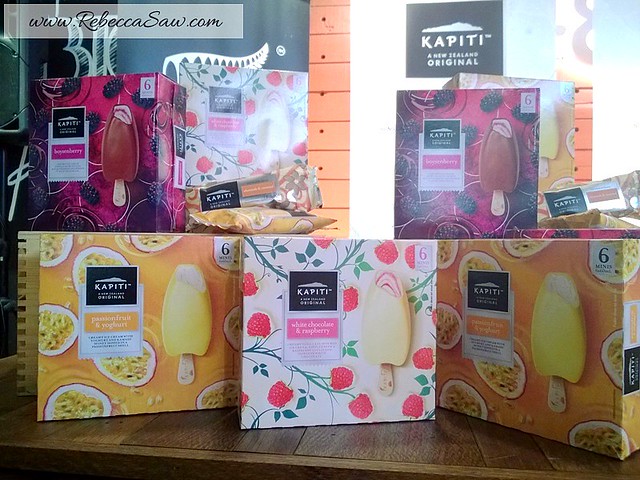 Oh, say hi to the grandfather of ice cream in Malaysia, Mr Sim from Sungei Timur Sdn Bhd, who was ensuring that everyone present is enjoying Kapiti ice cream by personally serving them himself! 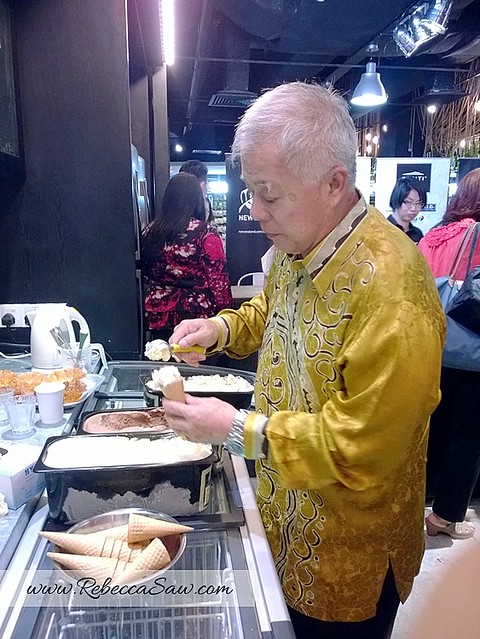 Besides being able to enjoy Kapiti from retail purchase, you can hop in Plan B Roasters (in B.I.G Publika) for double energy boost – a shot of caffeine AND Kapiti. Plan B Roasters has partnered with Kapiti to create delicious affogatos using various flavours from Kapiti, available for their Plan B Roasters customers. 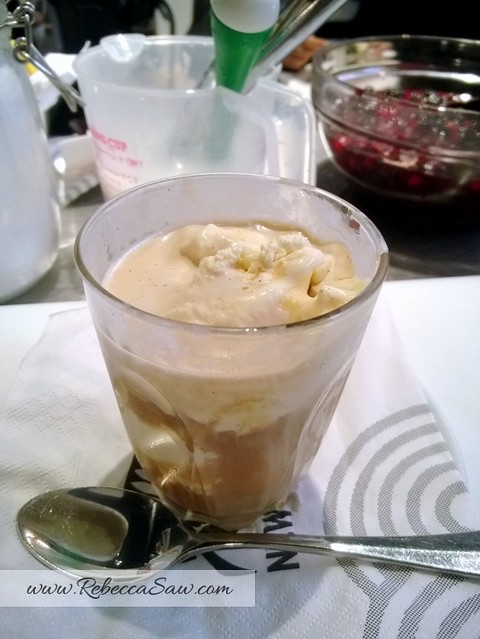 If you creative and hardworking, try some of these recipes courtesy of Kapiti. Attempt a New Zealand dessert – Pavlova or a Malaysian-ised version using wantan skin! Chef Maria Conte showed us to assemble some delectable looking (and tasting) dessert during the launch. 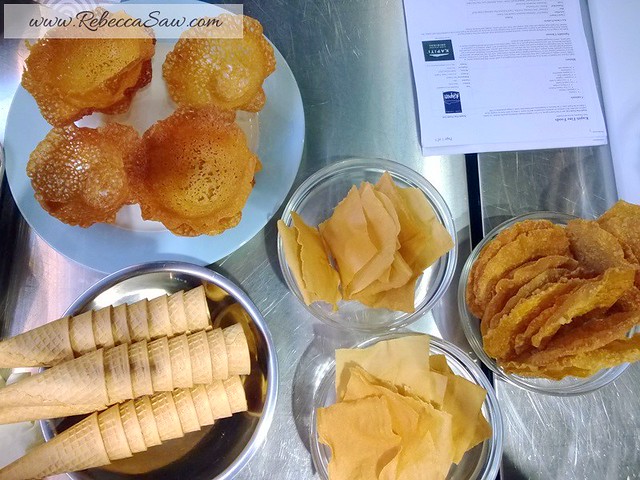 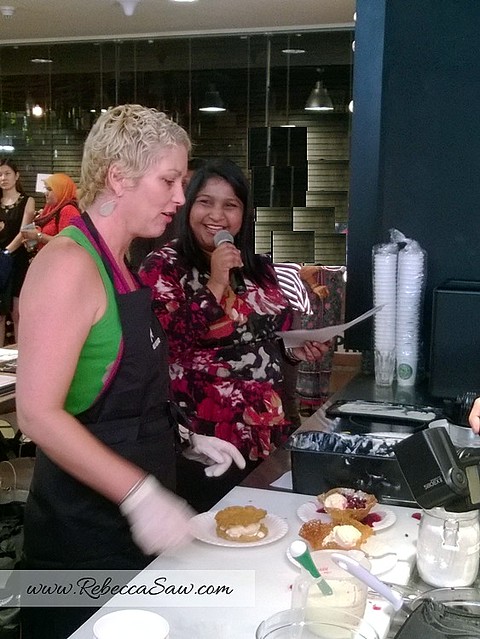 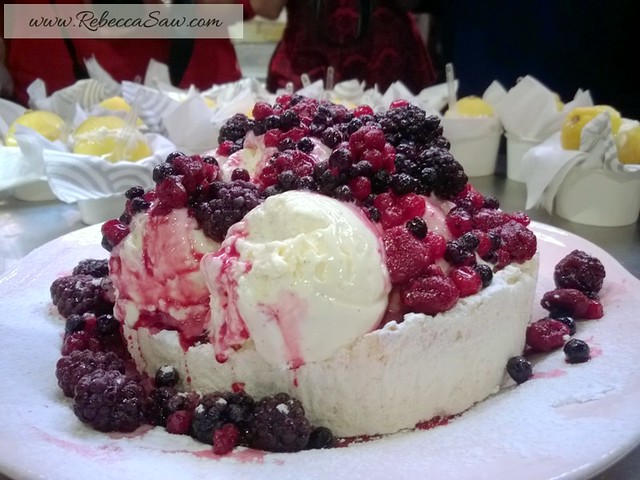 One particular one that I liked was this vanilla ice cream in a frozen lemon shell. 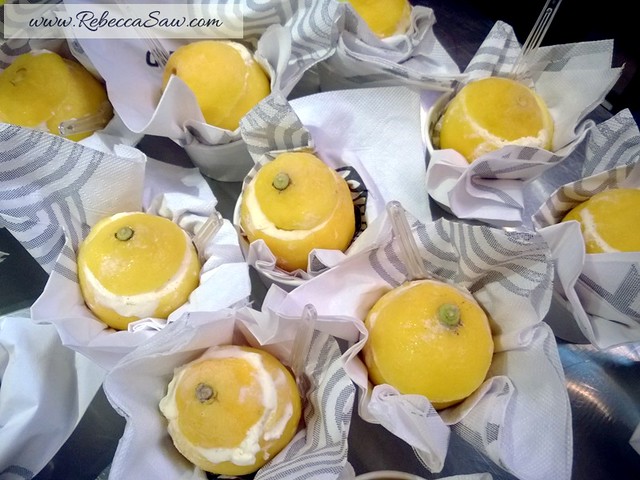 Here are the recipes cards. I hope you find them useful. 🙂 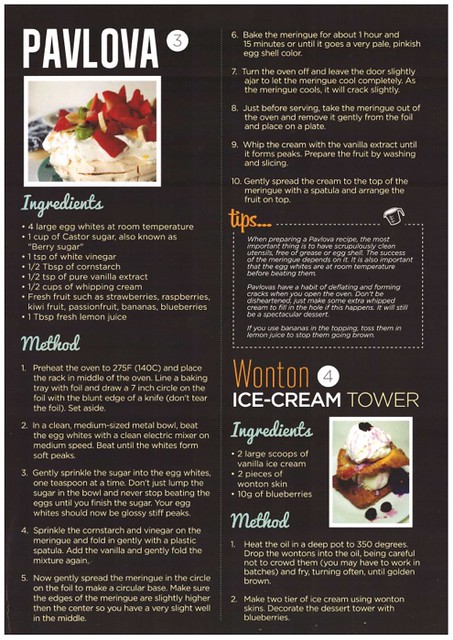 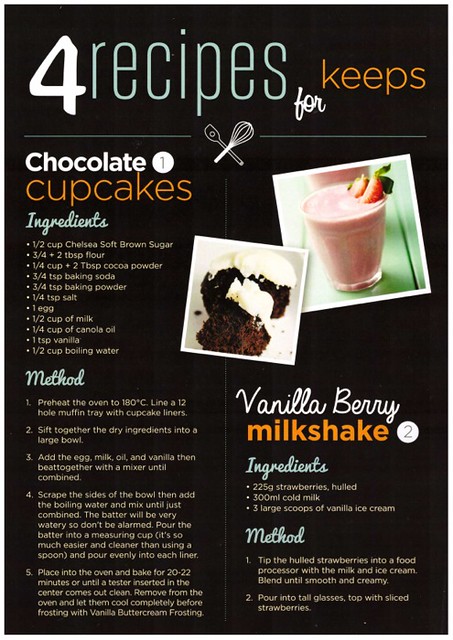 I seem to be the bearer of many good news for you from Kapiti. Here’s another one. If you are flying MAS or a guest of MAS lounges in KLIA, you can enjoy Kapiti ice cream too! Malaysian Airlines will be offering Kapiti ice cream in 100ml cups for their customers in-flight and at the Regional Lounge and Golden Lounge.
Speaking at the event, Malaysia Airlines’ Head of Inflight Services, En Shamsul Amree Salleh said, “Kapiti gourmet ice-cream will tempt our guests in First, Business and selected Economy class when they travel from Kuala Lumpur to Hong Kong, Perth, Melbourne, Brisbane, Sydney, Auckland, Narita, London and Shanghai”.

Fabulous, I’ll be enjoying my Kapiti ice cream if I’m flying to New Zealand even before I land in New Zealand. One day. 😀

More information about Kapiti can be found at: http://www.fonterrafoodservices.co.nz/products/ice-cream/kapiti-ice-cream-a-sorbet.html