The drink is the same; the World’s Number One Cognac – Hennessy X.O; which by now all of us are familiar with.
The familiar host is the ever debonair Will Quah and his smooth, reassuring voice took us through our culinary journey that evening, as with the past 5 evenings of the Hennessy X.O Appreciation Grows dinners before.
The tablecloth, black as death and elegant in contrast with the candle-lit table and its colourful centrepiece is familiar; and gives promise of the spectacular dishes it will hold for the evening. 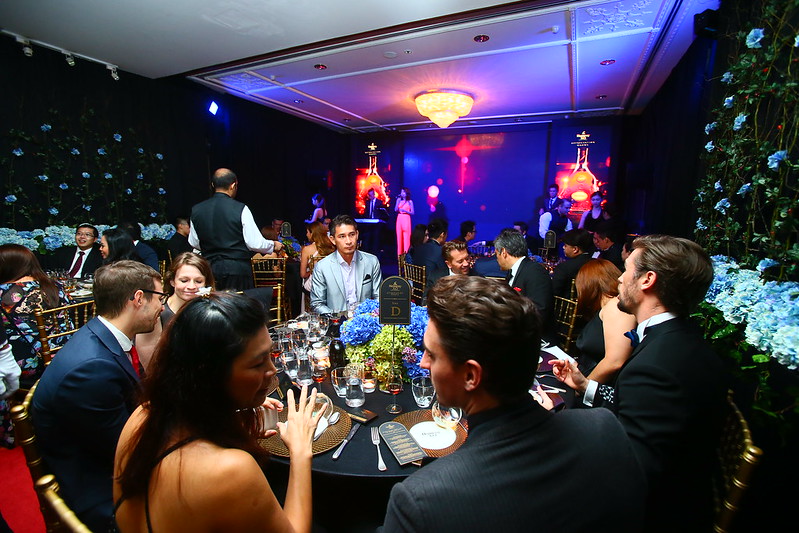 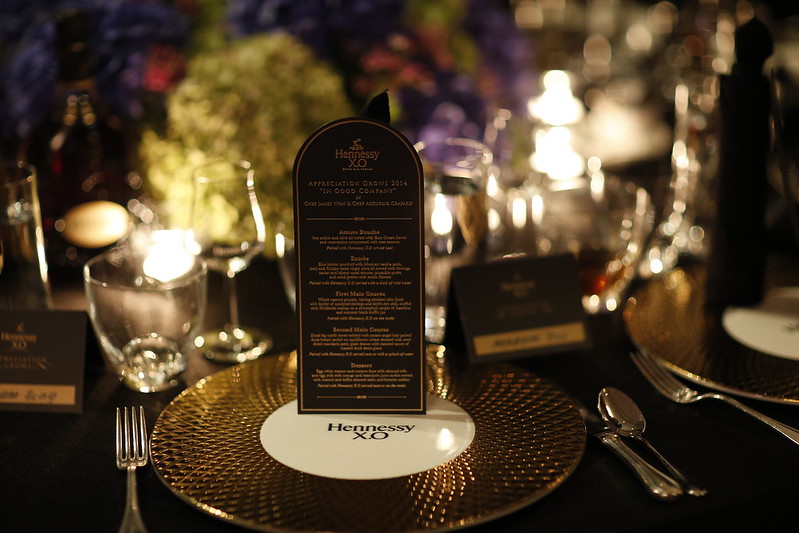 Dresscode is formal and the ladies revealed smooth back and deep fronts, while the men suited up smartly.

This exceptionally intimate experience hosts just sixty guests a night.
The venue was Carcosa Seri Negara; aptly chosen for its understated elegant and class. The area concerned was transformed into a ‘Hennessy Mansion’, complete with an intimate reception area set as a beautiful and elegantly decorated courtyard garden with antique French outdoor furniture. 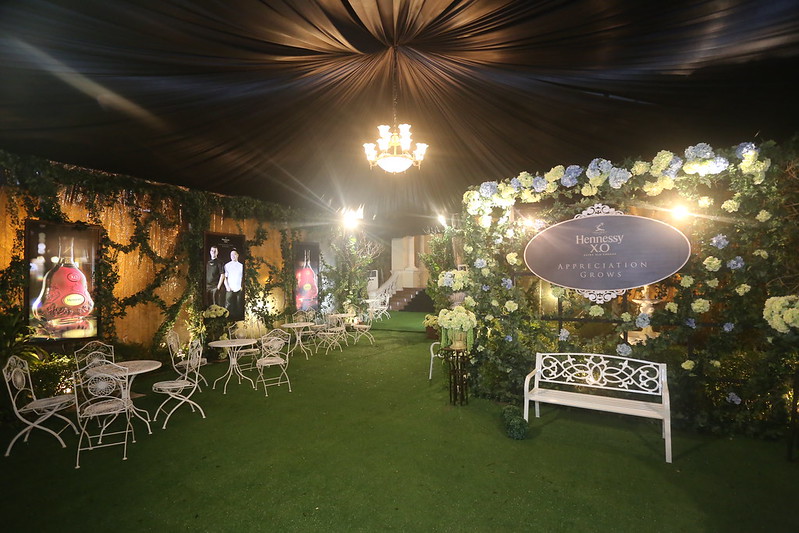 It was, of course, most suited for everyone’s favourite past-time – picture taking. 🙂 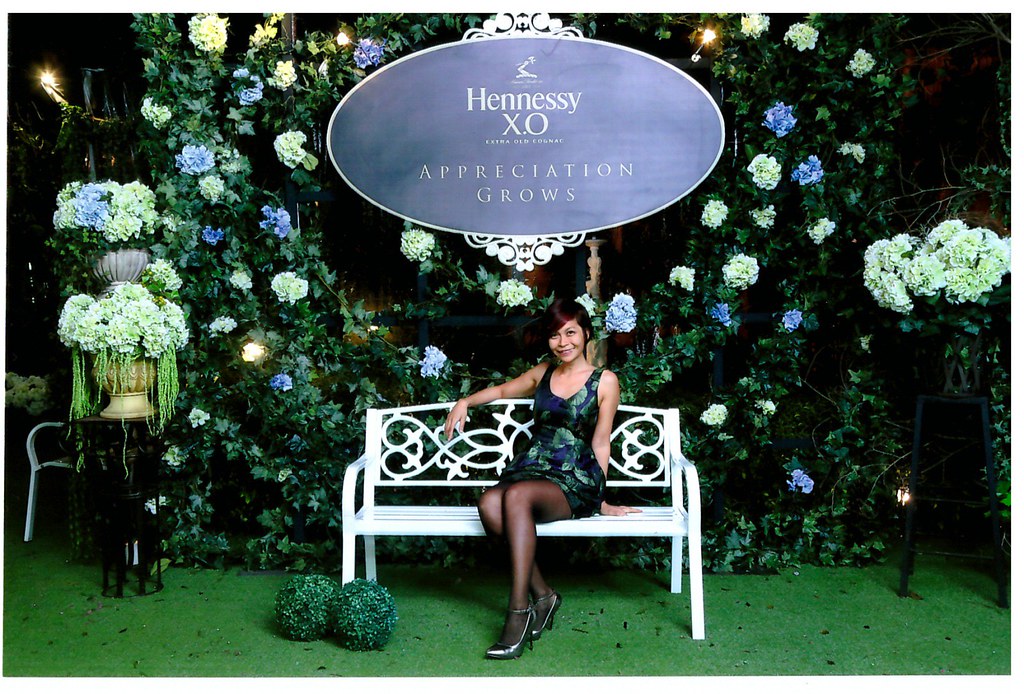 If you have been following my Hennessy journey, you would have noticed that each dinner has a theme attached to it, and the setting of the dinners has always been a big part of the overall experience.
At one point it was “on board” a ship (that’s was really memorable!) and another time it was the sand art depicting the story of Hennessy which really got everyone enthralled.

As usual we were ushered into a separate space set up specifically for the an intimate technical tasting of Hennessy X.O, where guests deepened their appreciation for the world’s most loved cognac, right before dinner begins. 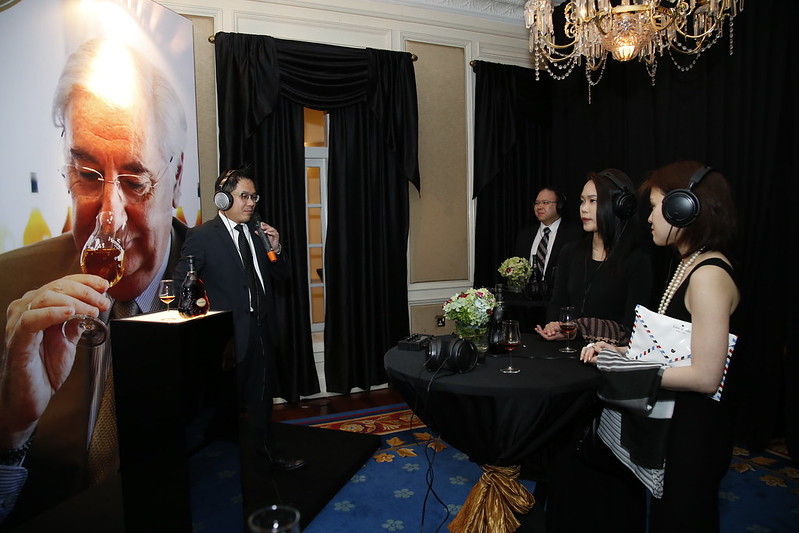 There’s no doubt of MY appreciation of Hennessy. Pour my glass refilled please. 😀 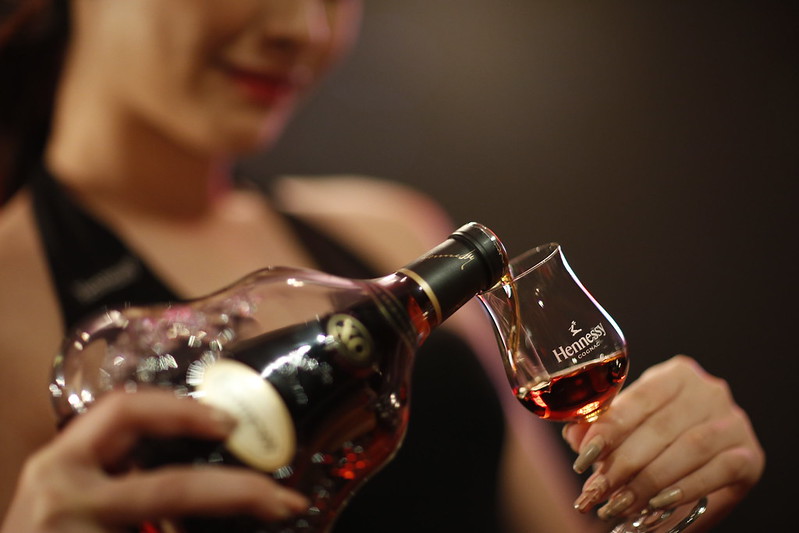 The journey of a memorable dining experience commenced soon enough, thankfully so for the guests whose tummies are rumbling already (or was it just me?) after the free-flow of Hennessy at the courtyard.

Mathieu Duchemin, Managing Director of Moët Hennessy Diageo extended a warm welcome to everybody, and an opening video played to showcase the journey of two friends and talented chefs: 1-Star Michelin Chef Accursio Craparo and local fast rising star Chef James Won in discovering the perfect harmony to complement and curate the new food logic known as ‘Hennessy X.O cuisine’, which will be served that night. 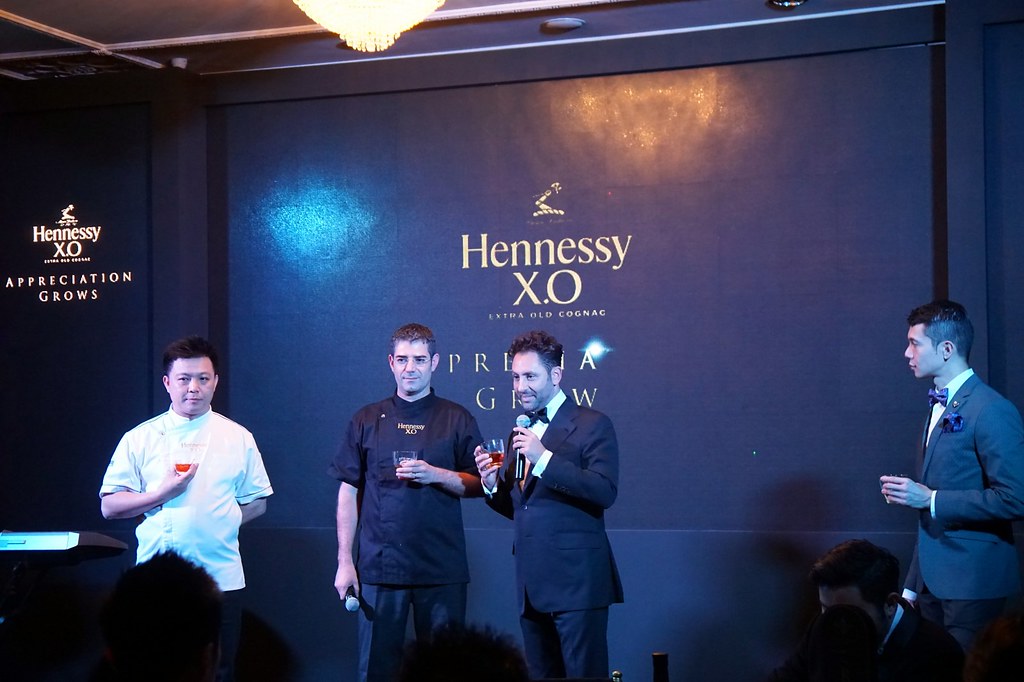 Both chefs then made an appearance and shared the story of their friendship, the collaboration with the world’s number one cognac and their food inspiration in line with this year’s theme ‘In Good Company’. 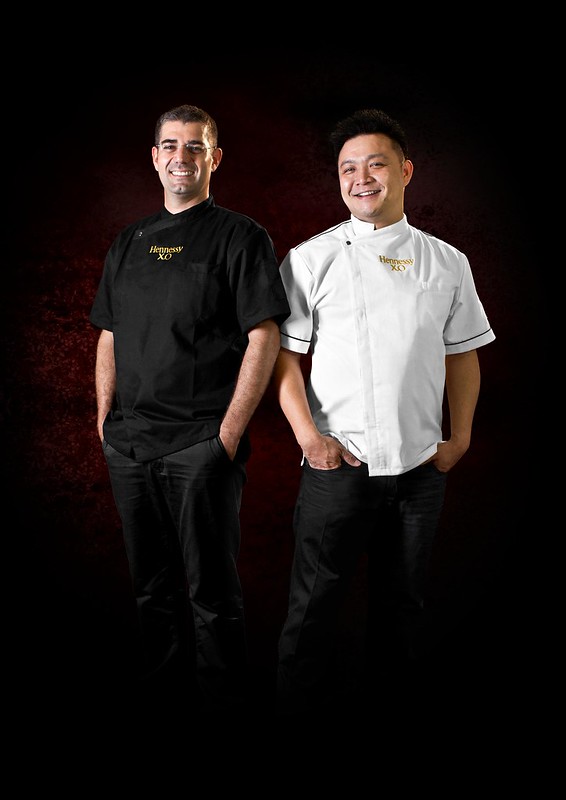 I have had first hand encounter with both during the pre-event session where both demonstrated their technical specialities during the interactive workshop.

Today, I will finally taste the dishes both had worked so hard on.
Both chefs had gone on a whirlwind journey through culinary diversity, heritage and cultural differences to put together a menu consisting of special and solicitous use of rare Malaysian and Sicilian ingredients; presented on a single palate to pair against the exceptional cognac.

With bated breath, we were served the first of this new delightful interpretation of Hennessy X.O cuisine, an amuse bouche of sea urchin and olive oil sorbet with Blue Ocean flower and watermelon compressed with rose essence.
This was paired with Hennessy X.O. neat, and the liquid flowed spicy and warm my throat, lubricated by the briny, creamy sea urchin and icy coolness of the sorbet.
The watermelon provided burst of juicy, fruity sweetness. 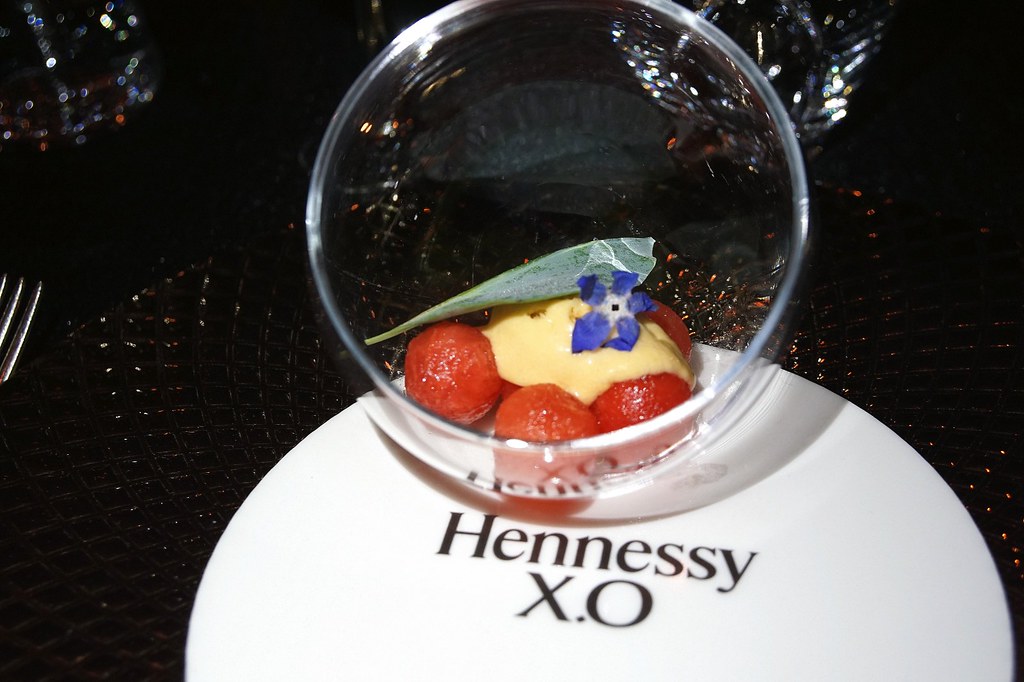 The name is a mouthful, but the flavours were a mouthful of spectacular texture and taste.
The lobster meat was perfectly poached, and tasted of the sea with the natural delicate sweetness of the flesh only the freshest seafood could offer. The accompanying sides of  coral mousse (which was like lobster bisque) and the smooth pistachio puree gave contrast to the overall dish.

This was a very promising opening to the evening ahead. Tuck into this magical plate, and sip the Hennessy diluted slightly with a dash of cold water to bring out the rich taste of the lobster and its essences harmonising with the delicate and fruity nuances of vanilla and extra virgin olive oil. 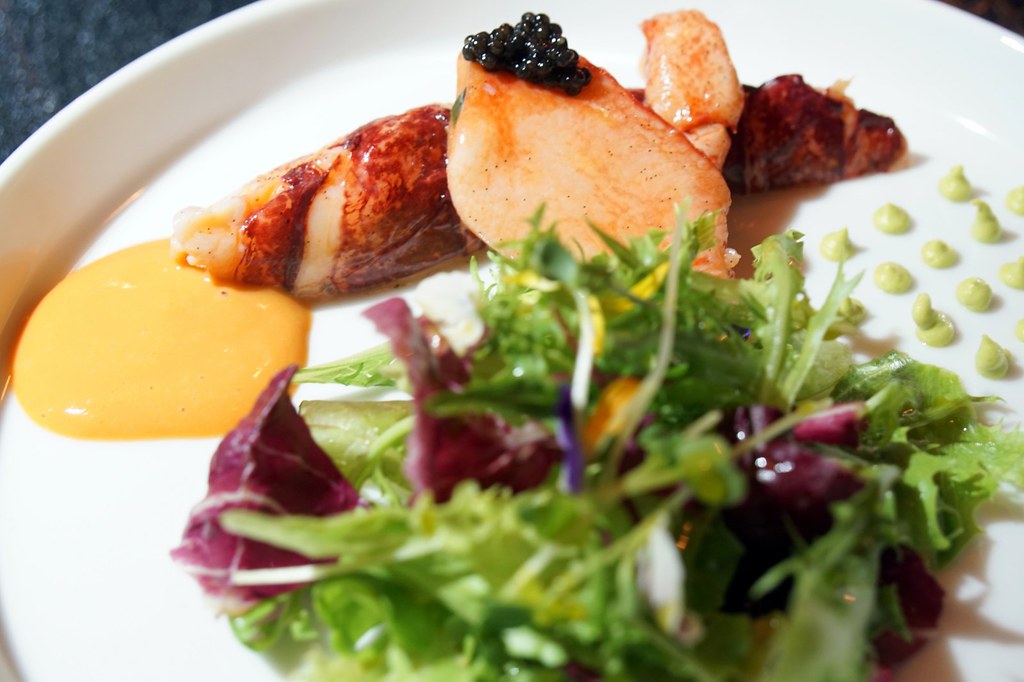 Due to my clean eating habits, I had to consume chicken, tragically more often than I wish to and it is becoming quite a bore.
Now Chef James, what do I have to bribe you with for you to part with your recipe for this incredible bird?

Each guest was served with a whole bird, and thank god it was a poussin (spring chicken) since asking for “tapau (take-away) would be sacrilege in this event (I was unashamedly tempted though).

The skin of the bird was carefully lined with butter of sundried shrimps and bird’s eye chili, which explained the superbly crispy and tasty result.
Disbowel the bird and be rewarded with Hokkaido scallop and mushrooms, just to name a few of the ingredients.
This bird lay on a chlorophyll carpet of Sicilian hazelnuts harvested directly from the best groves in Sicily and my my, this tapestry of delicious green and nuttiness is a spread we couldn’t had enough.

This poussin was specially marinated with Chef James’ secret brining recipe (yes chef, this is the sauce I want… ) and it is carefully roasted to ensure the tenderness and flavour of this dish partnered perfectly with Hennessy X.O served with ice cubes.
For sauce, the summer black truffle jus on the plate didn’t seem necessary to me, since the bird was perfectly juicy. 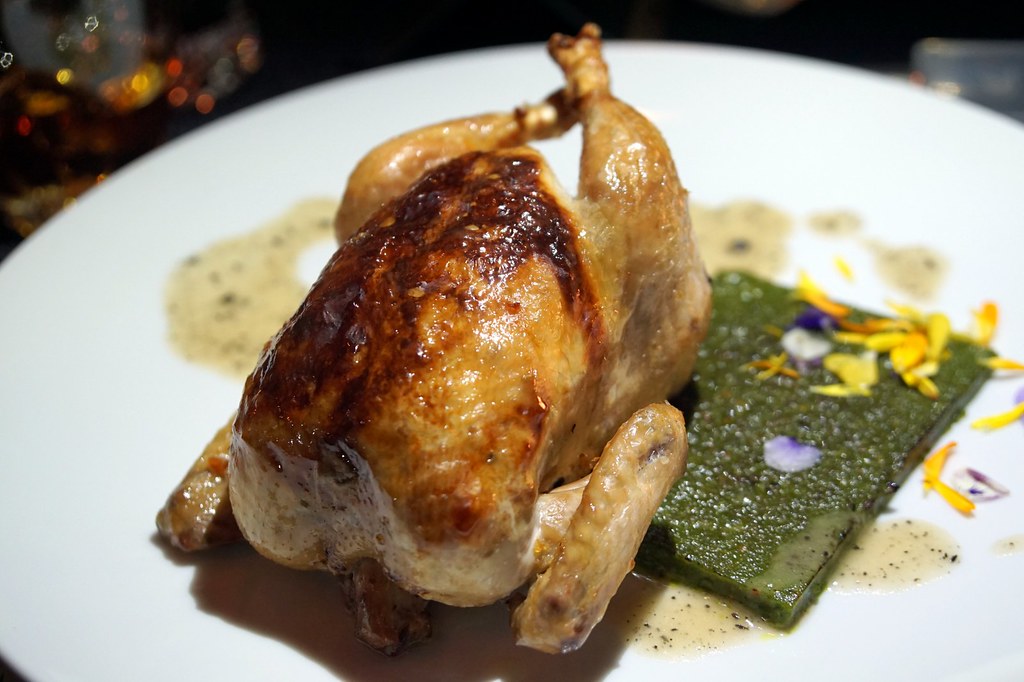 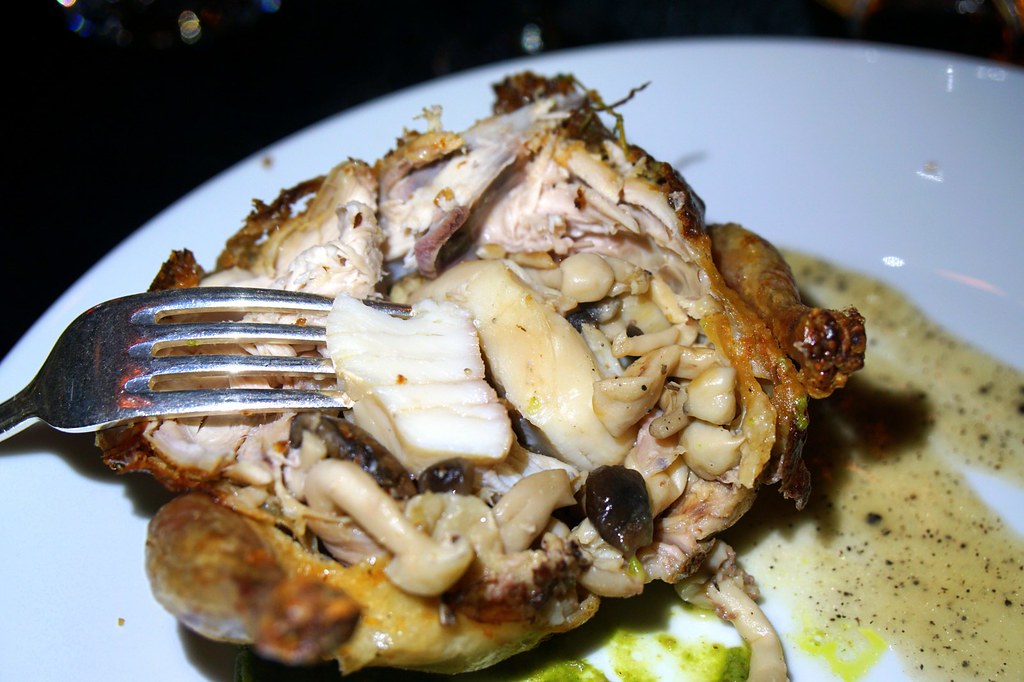 The chlorophyll and Sicilian hazelnuts carpet. I can imagine this on a toast. Hmmm…. 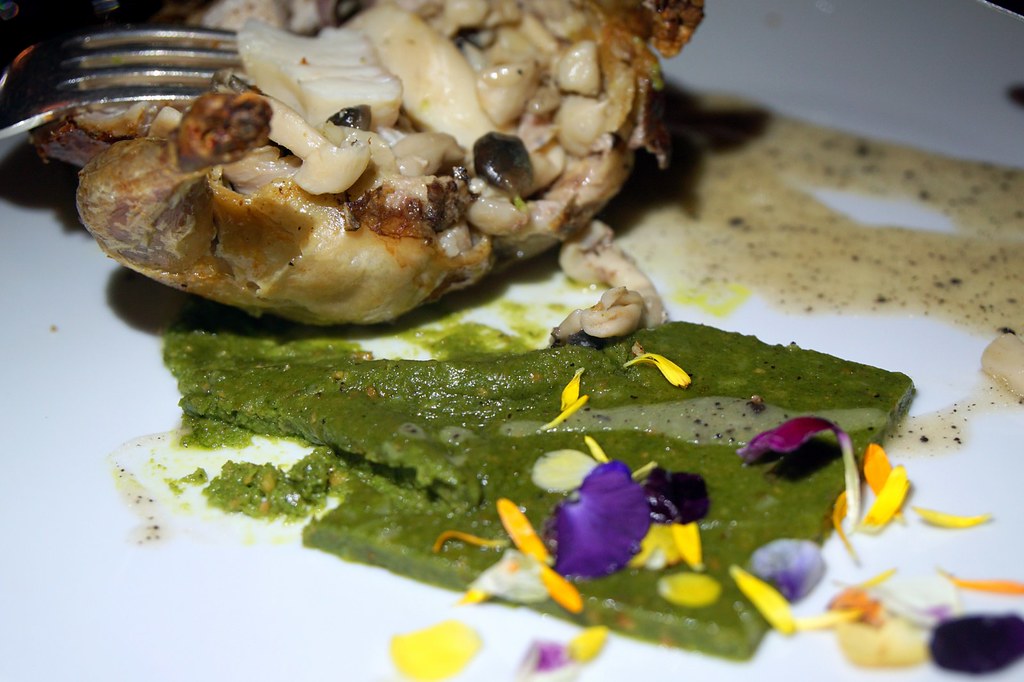 It was challenging not to finish the whole poussin so I did.
And when the next dish of Duck Confit tower twirled with potato angel hair paired with duck breast ravioli on cauliflower creme dressed with oven dried mandarin peel and caramel sauce of roast duck demi-glace was served, I wished that I am a cow, with 4 stomachs. 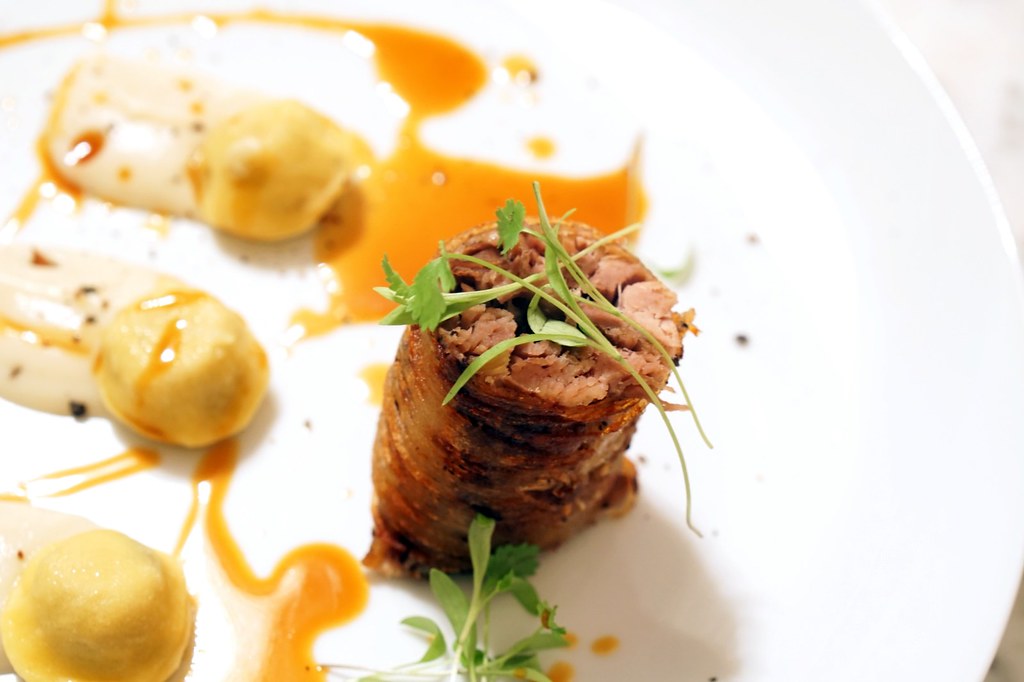 Nonetheless, good food must not be wasted, so I worked my way through pockets of pasta, reminding myself that these are handmade by Chef Accursio himself, who is known notably in his hometown as the Prince of Pasta.
The duck leg confit tower was as expectedly well-executed, tasty marinated meat without any tough bits or gameyness.
This dish paired exquisitely with the bold and complex taste of Hennessy X.O served neat or with a dash of cold water.

Stuffed, everyone was nonetheless intrigued with the dessert, printed on the menu as ” Egg white texture and content faux with almond tofu and egg yolk with orange and mandarin juice sorbet served with toasted and toffee almond sable and brioche soldier”. 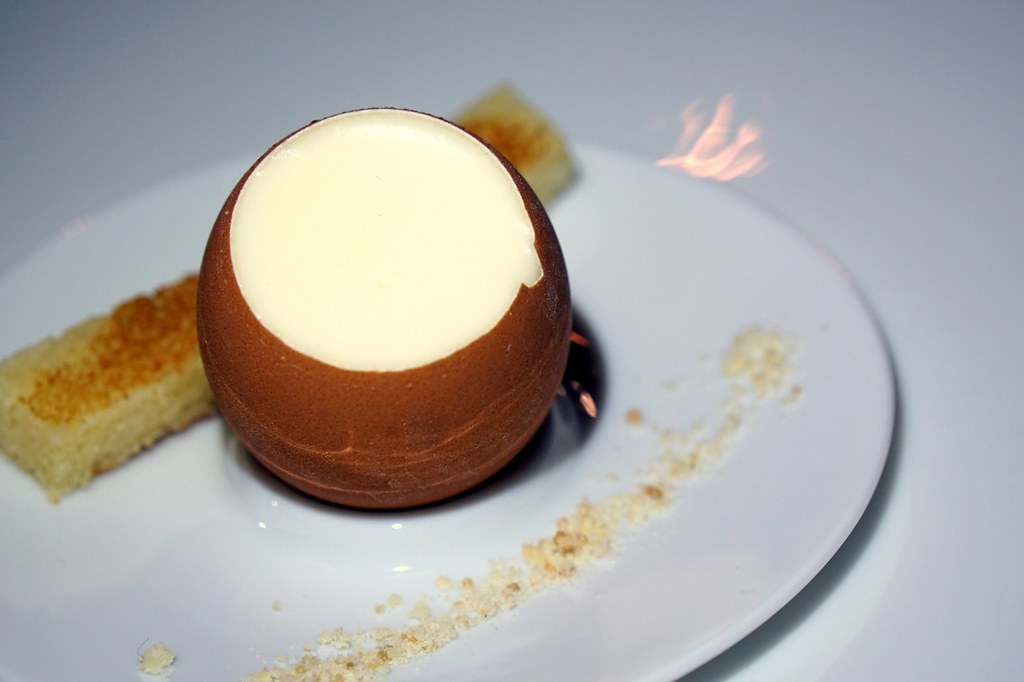 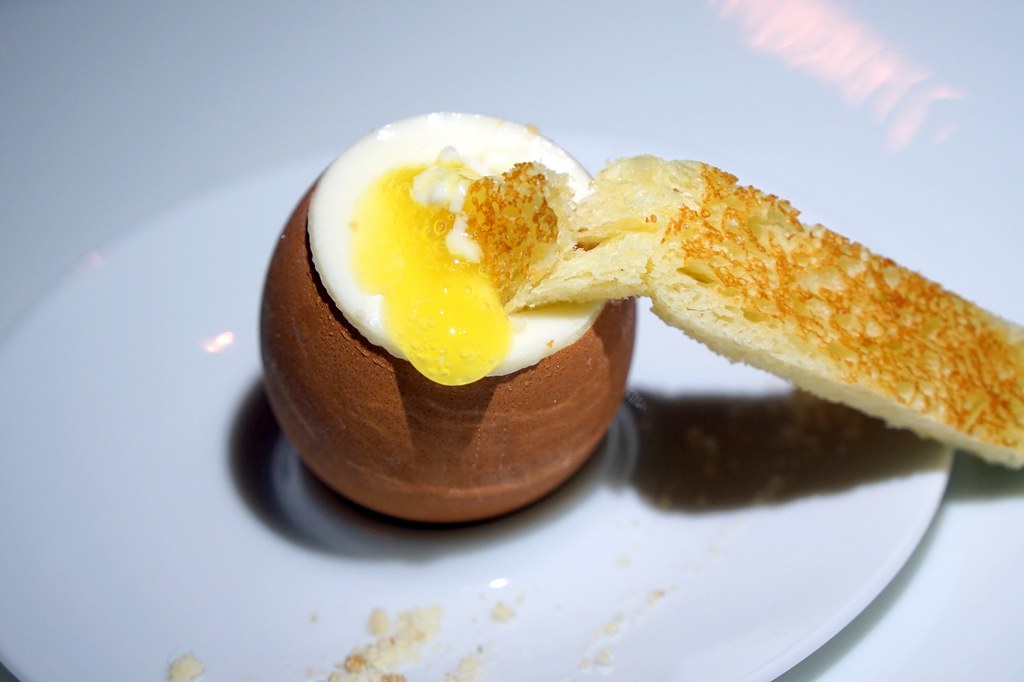 By now all the guests were mesmerised by Chef Accursio’s signature dessert of the night, an egg – presented in its natural form.

Consisting of egg white made up by Chef James’s signature almond tofu, skilfully handmade to preserve the natural creaminess of the almonds, and an egg yolk of orange and mandarin juice sorbet served with toasted and toffee almond sable and brioche soldier.
This simply presented yet highly complex dessert was served alongside with Hennessy X.O – neat or with a dash of cold water.
This unique sweet ending further showcased both chefs’ culinary techniques and skills into a masterful presentation of dishes that reveal the surprising subtlety and complexity of Hennessy X.O.

Kudos to Chef Accursio and Chef James for the expertly crafted meal of delectable dishes that was able to harmoniously play against the powerful, yet perfectly balanced and voluminous notes of the Hennessy X.O.

Now, when is the 7th Hennessy Appreciation Grows Dinner?
What do you have in store for us in 2015 MHD? 🙂 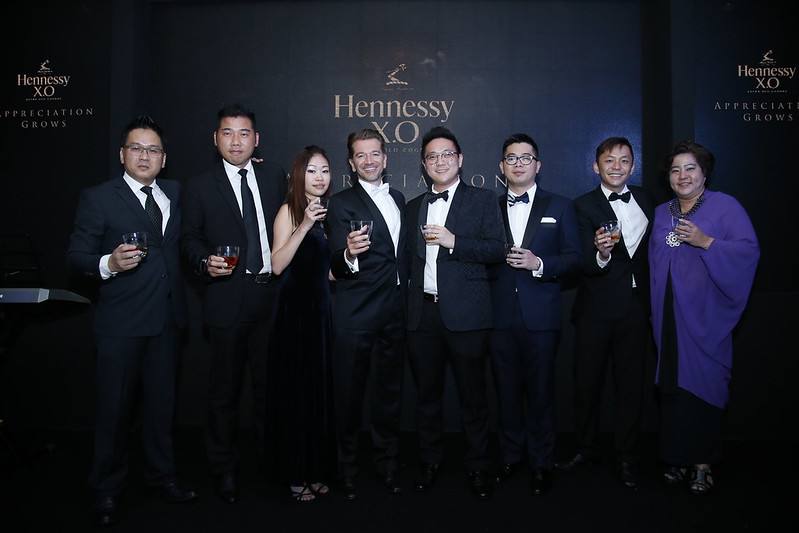 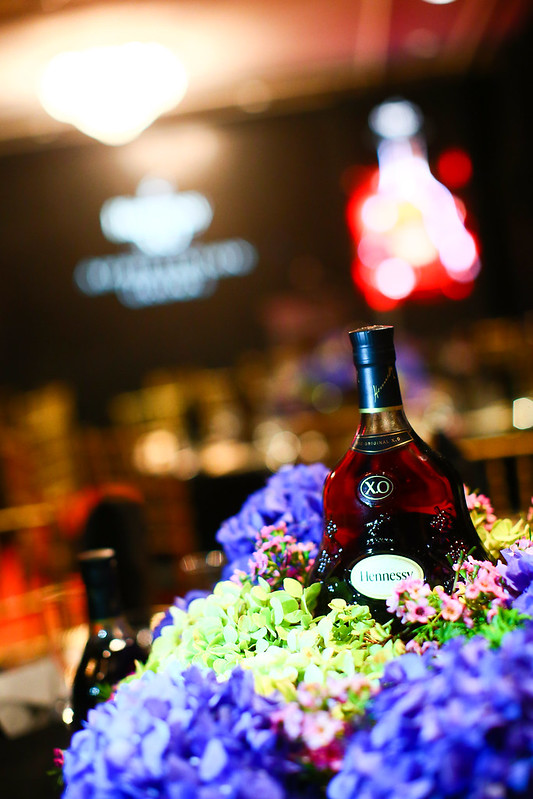 For an idea of the Hennessy X.O Appreciation Grows Gastronomy Dinners, do check out the links below. Each session is by-invite only and it features Hennessy’s rich savor-faire heritage paired against the culinary brilliance of the selected chef.