This is part of #RebeccaPenangHalalGuide. See full list here –> “List of Muslim friendly food outlets in Penang by Rebecca Saw”

From a simple hawker stall back when it started in 1992, Sany Char Kuey Teow is now a proper eatery with an open kitchen and its own floor space.
They have a big signboard up, but since it isn’t exactly a brick and mortar restaurant or outlet your best landmark is the Penang Snake Temple in Bayan Lepas.
It is an open air, roofed eatery just a few steps away. 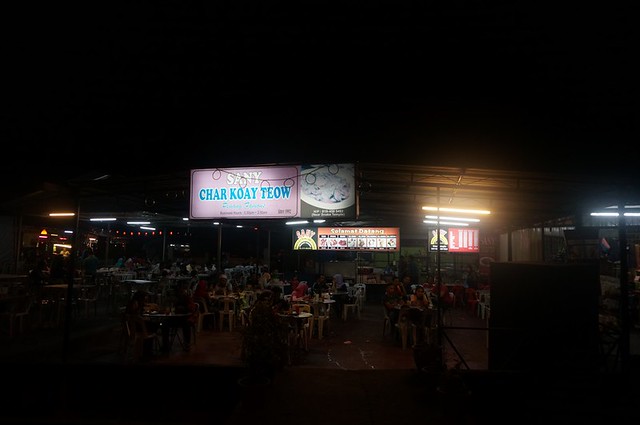 Stepping into the eatery is almost like setting foot into a large food court. The dining area is open air with roof with about 20 tables.

But it is at the back of the eatery that’s where the action is. 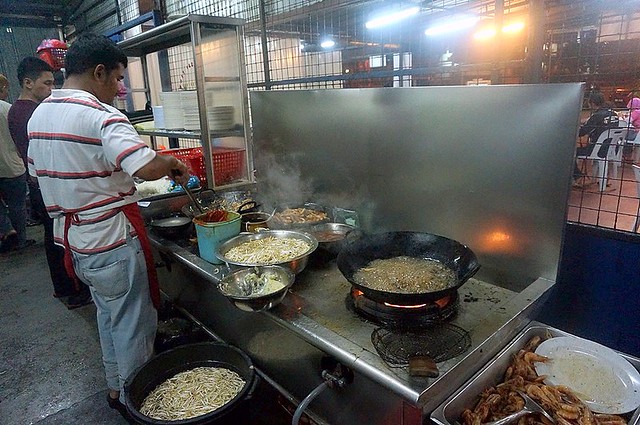 In the kitchen the main chef toils over the woks dishing out plates after plates of char kuey teow to keep up with the never-ending orders. The wait staff are seen leaving the kitchen balancing half a dozen plates of fresh out-of-the-wok flat noodles every minute.
And that’s not taking into account the hundreds of take-aways orders each night!

Although Sany’s menu offers almost 20 items it is the char kuey teow that everyone is here for.
And business is good. The crowd was strong and consistent throughout Sany’s opening hours. 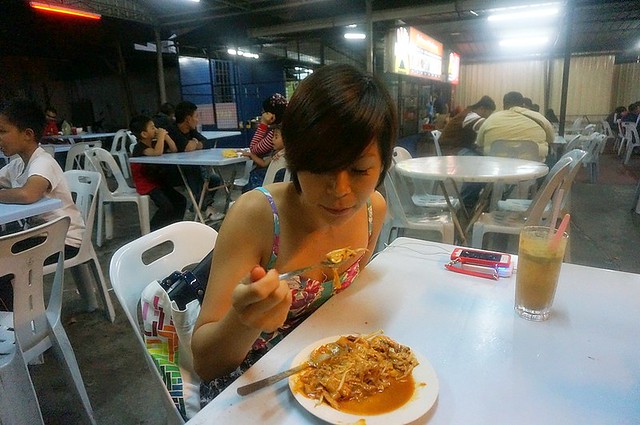 The key to this delicious plate of noodles is the “kicap” – the ‘Sany’ sauce. This special kicap is even available for sale so grab a bottle if you’re game to attempt frying your own “Sany CKT” at home.
Other than the kicap, the watery mix of egg plus the heady prawn stock really makes Sany’s CKT a stand-out among the other Malay char kuey teow versions. 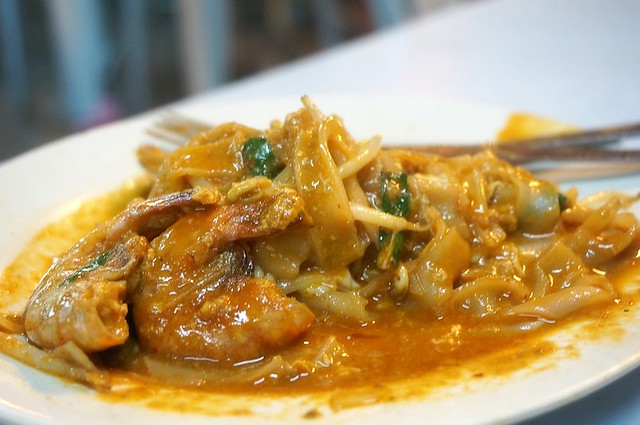 I was never a fan of Malay char kuey teow as it has always been greasy, black and wet. But I was hooked on Sany’s! 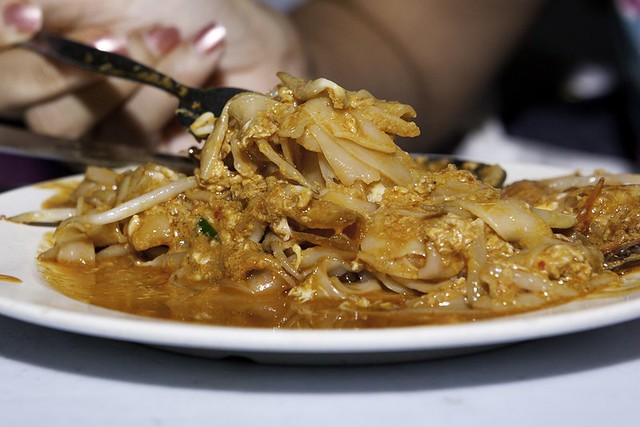 The prawns wasn’t a big deal to me. It was the flavourful, rich prawn stock that goes into the kuey teow that had me taking repetitive forkfuls of char kuey teow although the plan was to just sample a bite as we had so many outlets to check out that night.
I can’t honestly say the prawns were Grade A bouncy and crisp, but they were acceptably fresh at least. 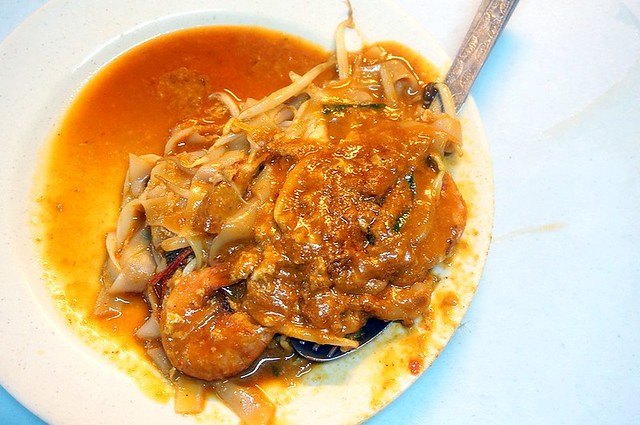 The Sany team is extremely friendly and didn’t mind me snooping around for some pictures so I stood in the spacious kitchen and observed the cooking process.
One main cook is in charge over the stove. He is perpetually glued to his spot and after the 20th plate I realized that regardless of the amount of orders, he fries each plate of char kuey teow individually, never in batches.

Another wok at his side is dedicated to deep frying the prawns alone. 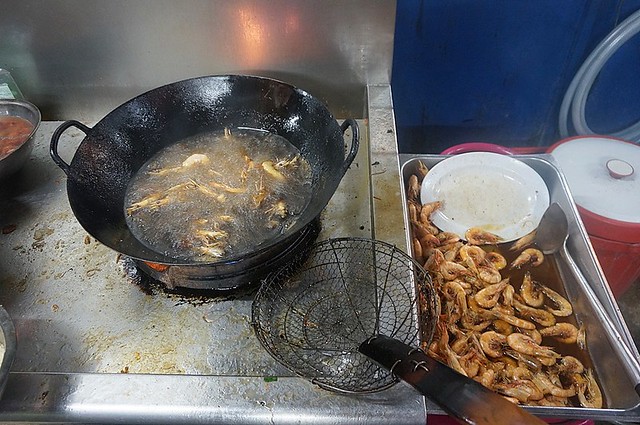 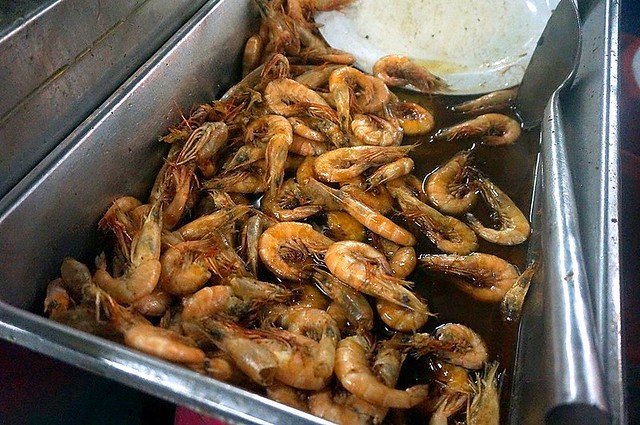 Once the prawns are done it is scooped up and added into a large pot filled with earlier prawns.
These prawns are swimming in gravy and it is from this pot that the cook scoops into his wok to fry each plate of char kuey teow.
(See the black pot beside the wok that holds the prawns?) 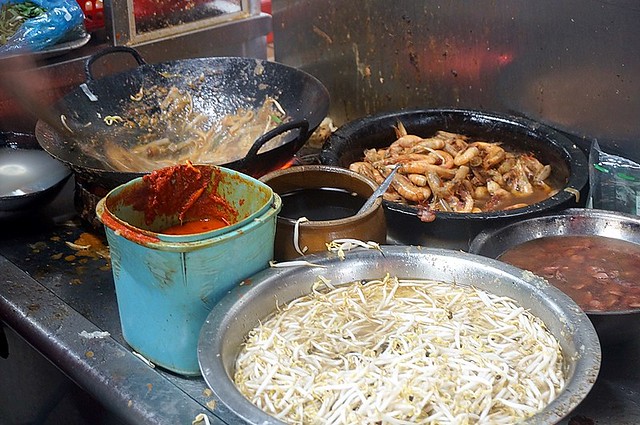 The procedure is similar for each serving. A ladle of oil, prawns, bean sprouts and cockles followed by the kuey teow. Then the cook added the sauce and chilli and gives it all a quick stir over high heat. Lastly, he breaks an egg into the mix. 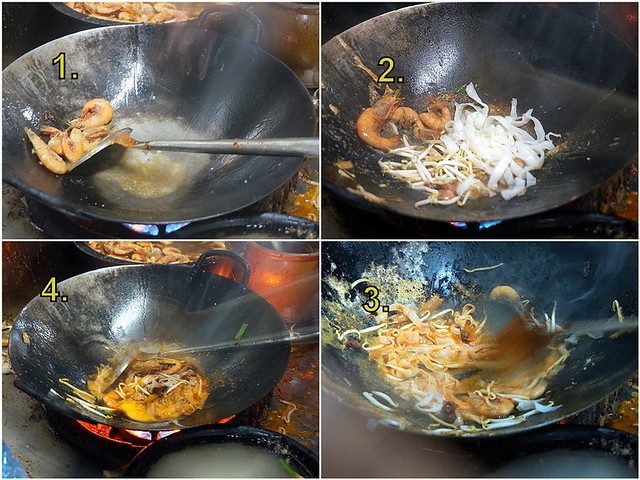 Sany’s Char Kuey Teow won’t be getting top marks for presentation but no one really cares. 😀
In fact it’s a signature of theirs; the chef scoops up the noodles from the wok onto only on one side of the plate. 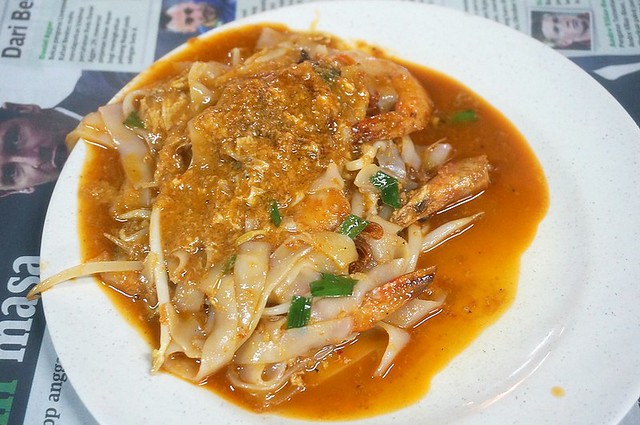 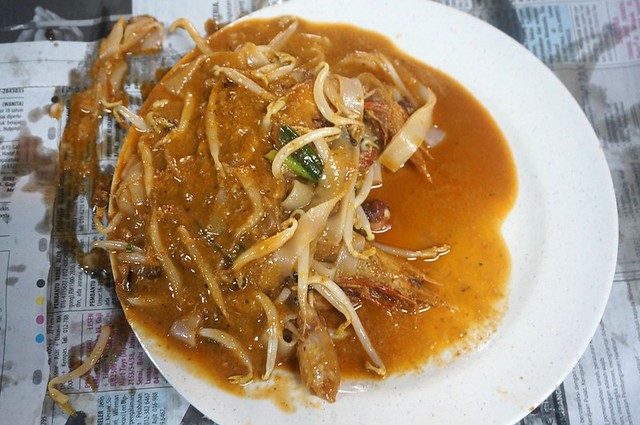 We saw some of the other items on the menu such as the Nasi Goreng Sotong and Nasi Goreng Ayam being served and they didn’t look too bad. So yes, no worries as there are other food options (about 20+ in fact) available at Sany’s, not just char kuey teow. 🙂 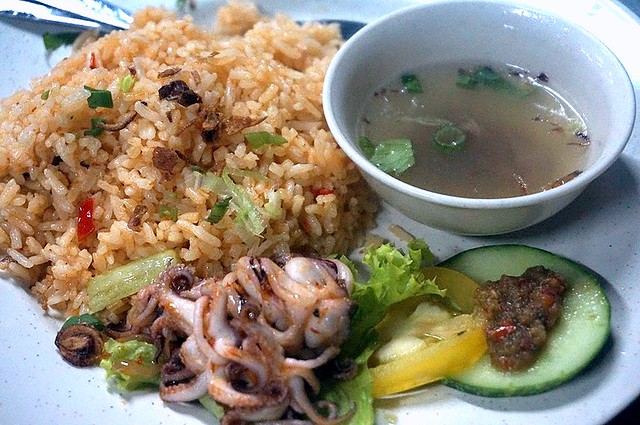 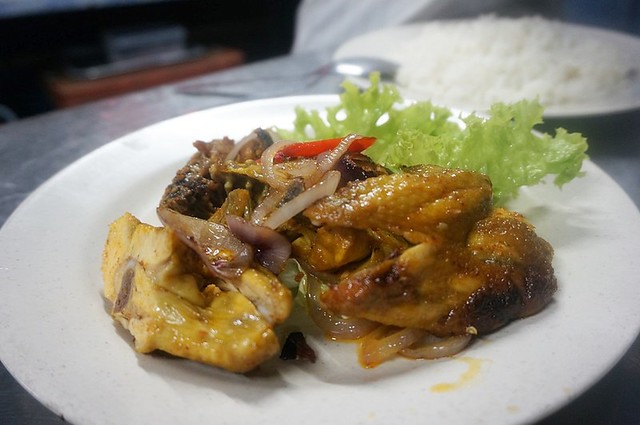 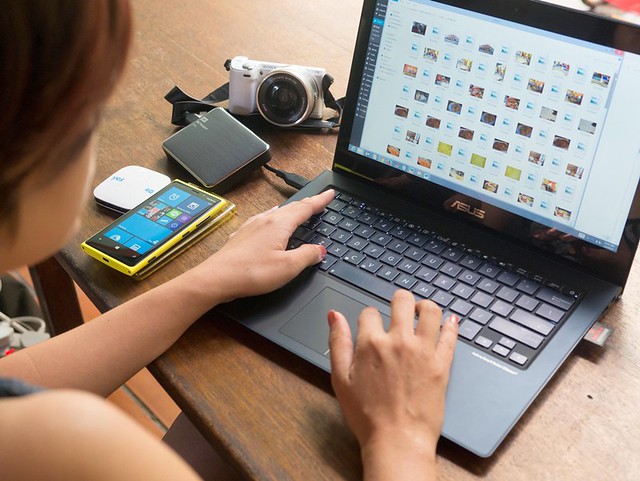