You have met Rainier HERE, or if you haven’t, Rainier is a good friend of mine who is currently residing in Singapore. When I was in Singapore, I couldn’t have asked for a better host. He secured the booking for my L’Atelier de Joël Robuchon dinner and lunch at Jaan. He took time to explain & helped me understand the dishes at both places. That certainly aided me a lot in my reviews. So when he was in town recently, I had to make certain that he had a good time too.

I remembered he saying that he liked Penang food, knowing that I’m a Penangite myself. There’s plenty of places selling Penang food in KL, but since he wanted to have a whole lot of them instead of just one or two dishes that originates from Penang, I brought him to Penang One, a restaurant in Puchong where you can actually get your authentic Penang food fix under one roof. 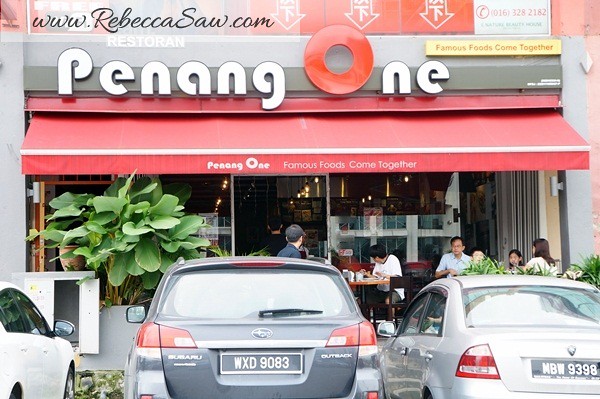 The interior of the restaurant was quite spacious and the decor was kept to a bare minimum. Only faux signboards of Penang roads where the food that they’re serving originates from were put up on the wall. Quite informational and useful for foodies I must say, and I guess when you’re riding on the fame of Penang food, fancy decor wouldn’t have mattered. 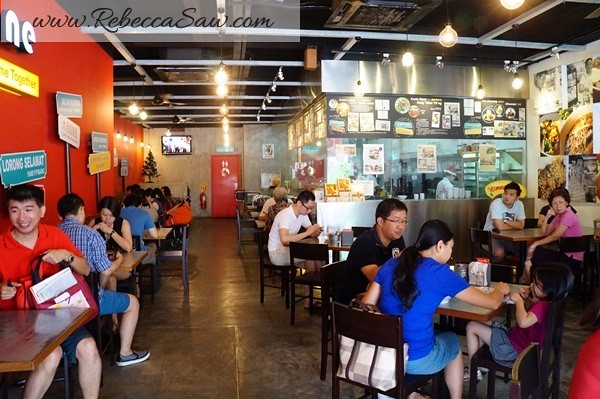 We were starving when we arrived (3 hungry men and an ever-hungry lady), and was really looking forward to indulge in an gastronomical lunch. Based on what I have read online, Penang One seems to be THE SAVIOR for those craving Penang food. Even Penangites are known to rave about it. So I guess expectations were running high that morning.

For drinks, we ordered their hot Pat Poh (RM 4.50 per cup). This is one of Penang’s signature drink. Pat Poh literally means “eight treasures” in Chinese. The unique herbal drink gets its name from the eight herbs used in its concoction. It was created by a Hainanese immigrant during the pre-Merdeka days and is now mostly sold in bottles in syrup form.

The drink is supposed to have cooling effects on your body (as with most herbal drinks) and prevents you from having feverish after-effects as a result of consuming too much heaty and spicy food at one sitting. 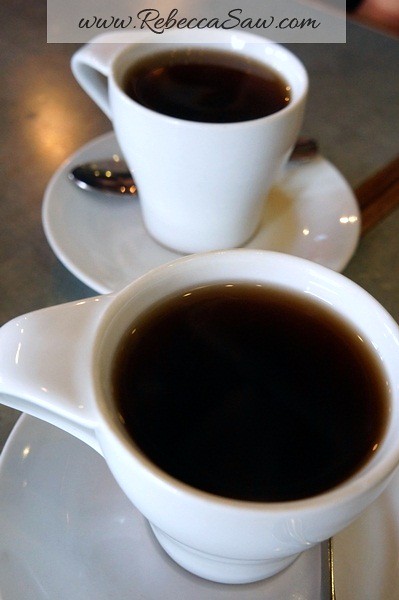 This is another popular drink; freshly squeezed Ambra sour plum drink for RM5.80. Sour but refreshing, this is bliss during scorching hot weather days. 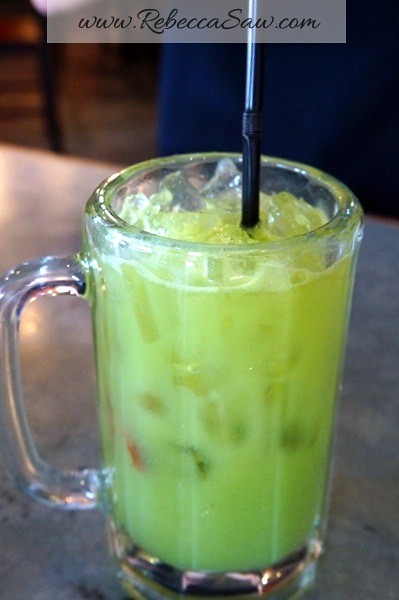 We started off lunch with Kampung Jawa Pee Chuan Char Koay Teow. Penang may be popular for many dishes; laksa, lor bak, nasi kandar but for me, my favourite is still the Char Koay Teow.

This costs RM9.50 per plate. To be honest, I was dismayed at first when this dish was placed on the table as the noodles looked rather greasy. I’ve always preferred my Char Koay Teow dry and fluffy but this had a sheen of grease coating the noodles. Thankfully it turned out fine. The ingredients was fresh and the bean sprouts wasn’t limp or soggy. The prerequisite wok aroma was present and the flavour rich and distinctive. 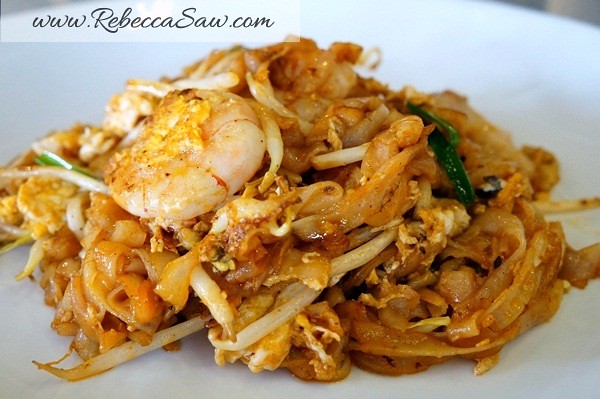 Next up is Pulau Tikus Bark Thong Hokkien Mee (RM 8.50), garnished with fried shallots and sliced hard boiled eggs on top. For me, “hokkien mee” will always be this, and not the black soy sauce KL version that everyone is fond of.
Penang One’s version was decent for Penang standards. The portion was just nice and the steep price was almost justified with the addition of pork ribs. I still felt that the stock could do with a richer body, as it tasted a tad diluted to me. 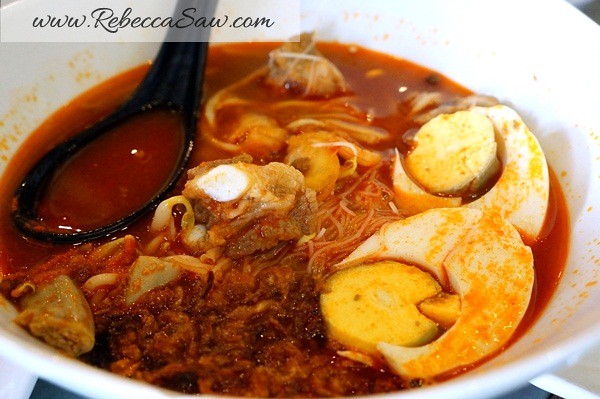 It’s a challenge to get a good bowl of adeptly prepared Koay Teow T’hing. More often than not, the Koay Teow T’hing stalls in KL serves pretty thin stock which lacks the deep pork flavour. Even more elusive is the Duck Meat Koay Teow T’hing which Penang is famous for as well.

And I guess for good reason too. Lum Lai Duck Meat Koay Teow T’hing lacked flavour and though this is not a fault of theirs, but rather of Penang One staff, the noodles that came with our bowl of Koay Teow T’hing was clumped up together at most parts. It got really annoying to eat after awhile as I had to take time to separate the noodles bit by bit before slurping it down with the fish balls and coagulated duck’s blood. 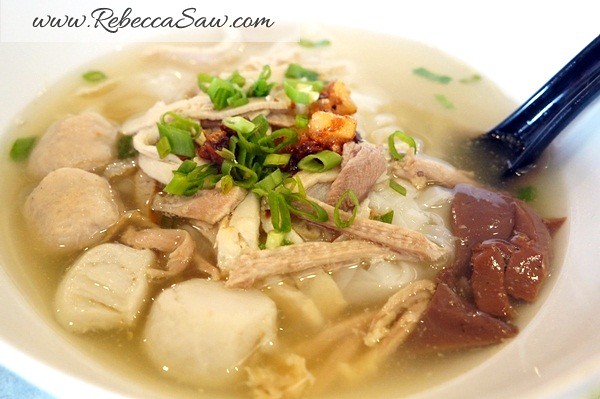 A true blue Penangite will claim that a visit to Penang is incomplete without trying out Laksa, a popular spicy noodle soup made from sour, fish-based soup. Laksa is listed at number 7 on World’s 50 most delicious foods complied by CNN Go in 2011, and it’s Penang’s pride and joy. 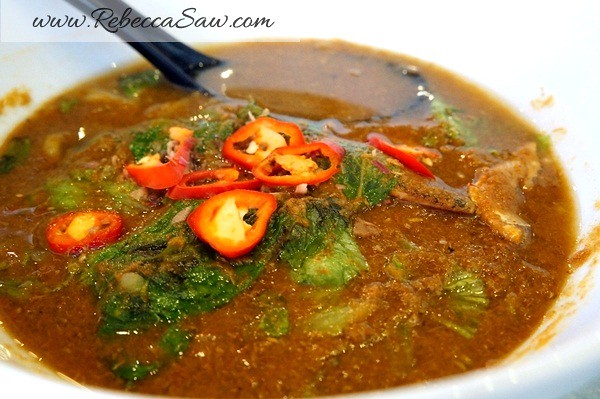 Lorong Selamat Ji De Chi Asam Laksa is priced at RM8.50 per bowl. I suppose I can say I enjoyed the Laksa. The pungent, fishy aroma was there and the soup was thick and rich enough though the overall taste lack something the “wow” factor that could make you ask more. It was good, but not on par with the Air Itam one. 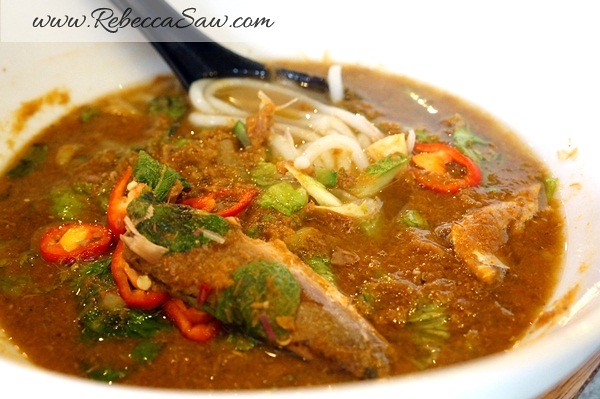 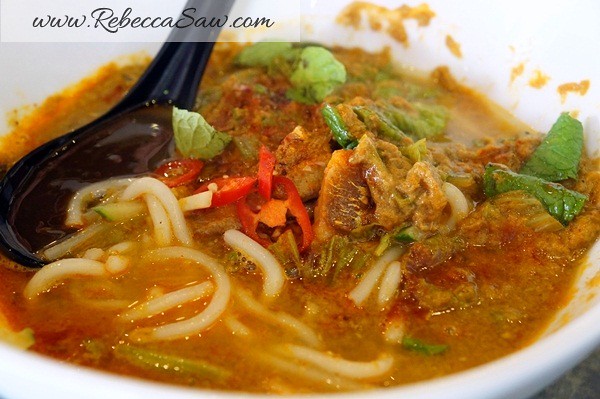 To be frank, I beg to differ but I’ll save my arguments. This Siam Laksa was served with a spoonful of savoury prawn paste as well. 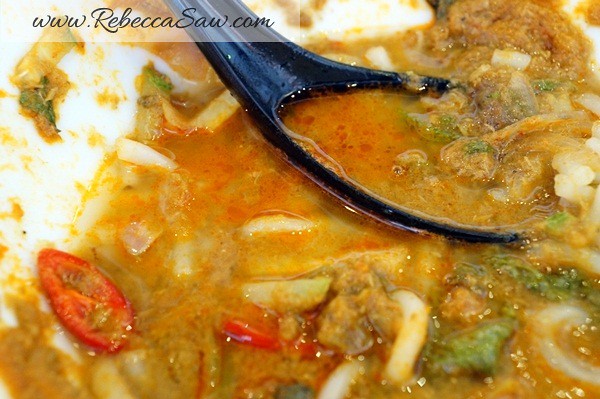 The Yam Cake was beyond reproach though. Fluffy, studded generously with yam cubes yet not oily, all of us loved it! 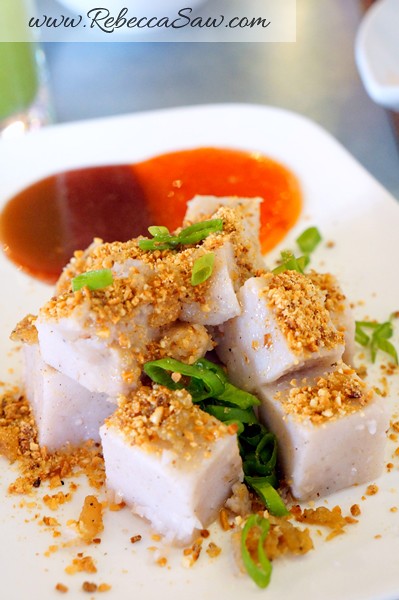 Last but not least, the Kampung Malabar Loh Bak. 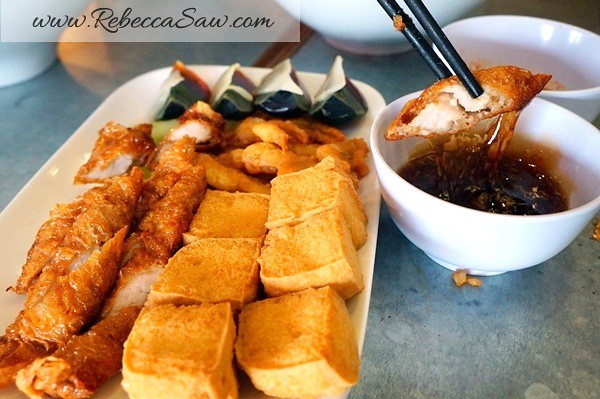 For RM 11.90, you get a platter of spiced pork meat rolls, fried bean curds and prawn fritters served with a side of sliced century eggs and sweet sauce dippings. 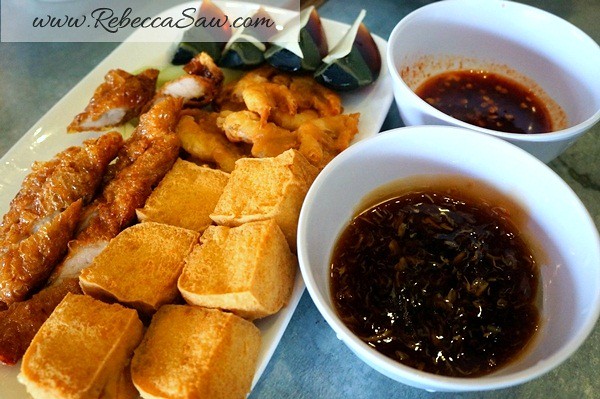 Take a look at this Loh Bak. It’s made from lean meat. Personally, I prefer the fatty version of Loh Bak where where the 5 spiced meat rolls has alternating layers of lean meat, fat and with added chopped chestnuts in the mix. Those who wants a ‘healthier’ and ‘lesser cholesterol’ version of Loh Bak would enjoy this, but if I were to indulge in fried food, I would want to go all out with the rich and fatty version of the Loh Bak!
The rest of the platter was quite all right, except that the prawn fritters had more batter than prawns on it. Give me my prawns! 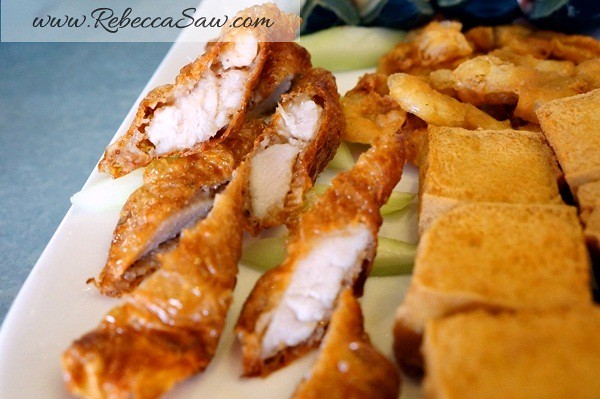 Another grouse I had was with the dipping sauce. It was too starchy& gooey and thus difficult to coat the lor bak. We had to continuously dip our lor bak into the sauce before we could get a decent coating of it on our food. 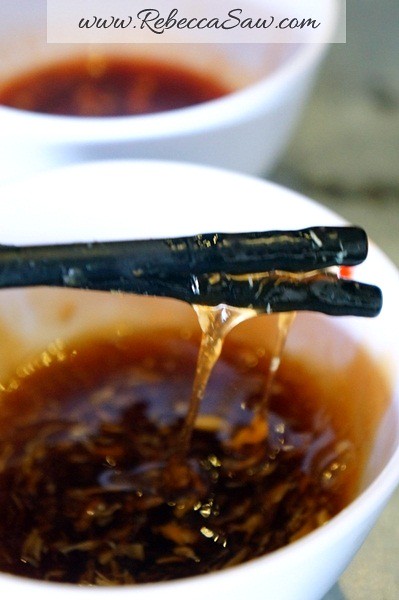 The chilli sauce did not tickle my fancy either. But all in all, the entire platter of the Loh Bak was adeptly fried. There’s not much excess oil oozing out when you sink your teeth into it, so the platter can actually be quite enjoyable if you’re to have it over a chatting session with friends.

If you don’t already know, the food that’s offered here in Penang One are sourced from hawkers who originates from Penang. While preparing food for their own stalls in Penang, the hawkers will set aside a portion for the folks in Penang One and send it to a centralized point in Penang where the food operators from Penang One will pick it up and bring it down to their outlets.

From there, I was told that they will add in other essential ingredients and then cook them for their customers. Some food were picked up daily while some others were picked up once a week.
So, I guess that explains why the food price is quite on the high side despite the fact that the fare that’s offered in Penang One is just hawker food.
Being a Penangite ourselves, Kevin and I would rate the food in Penang One between decent and good. Some food like their Char Koay Teow is worth trying, but frankly speaking I wouldn’t be running all the way here just to get my Penang food fix. There’s plenty of places in Klang Valley where you can get authentic Penang food as well, some of which taste even better and all in all, cheaper too!

Below is the address to Penang One, in case you want to try it out: