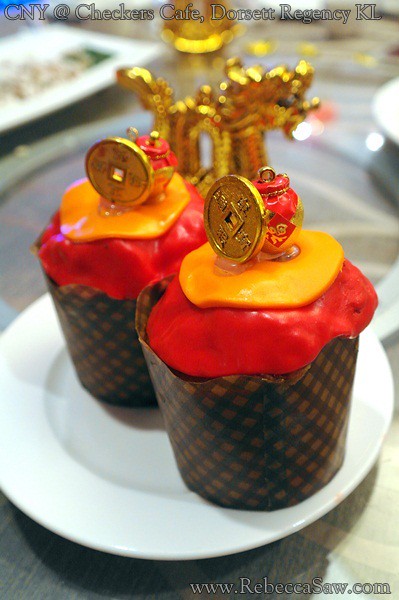 Dorsett Regency’s only F & B outlet; Checkers Café offers a slightly out of the norm option from the traditional 8 course set dinner for 2012.
Instead of a sit down, course by course Chinese cuisine, Checkers Café presents a series of value-added CNY themed buffets; both ideal for big groups and small, cosy gatherings.

Brush away all your anxieties of not having enough pax for a set course of 8-10, and no more pondering for hours picking the “best” set dinner for everyone.
Concerns such as “Does Andrew eat sea cucumber?” , “I think Jane is allergic to broccoli”, “Hmmm..I like this set but the fish is done sweet and sour instead of in soy sauce”  ceased to exist as buffets would offer something suitable for even the fussiest of eaters. 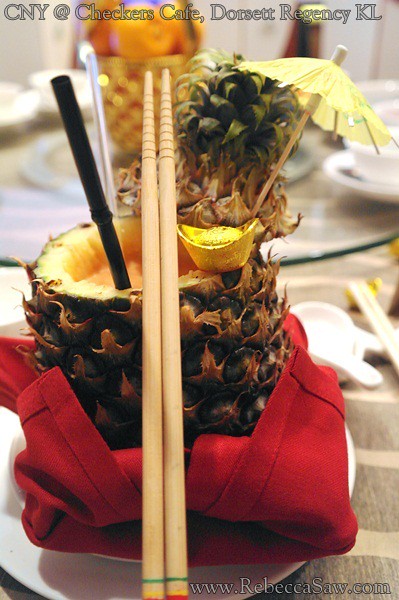 The best part of the buffet at  Checkers Café?

Traditional ubiquitous items such as Yee Sang, Braised Sea Cucumber and Mushroom, Chinese Fried Glutinous Rice in Lotus Leaves and Stir Fried Dry Oyster with ‘Fatt Choy” shares the spread with popular favourites of smoked salmon, Japanese sushi and sashimi, cold station with fresh oysters and lastly; the fact that EVERYTHING comes in unlimited portions for ONE price!!

Below: Yup, you get to yee sangggggg too!! 🙂 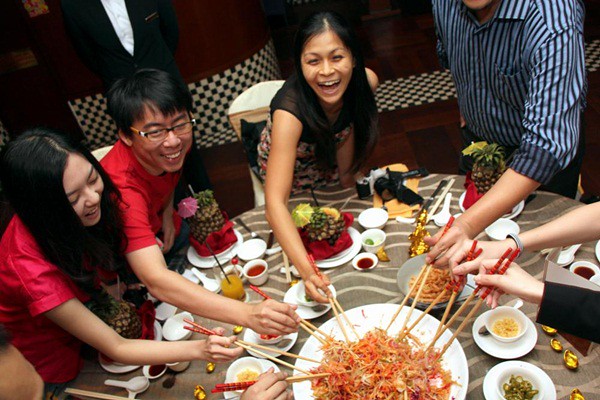 A good deal? You bet. 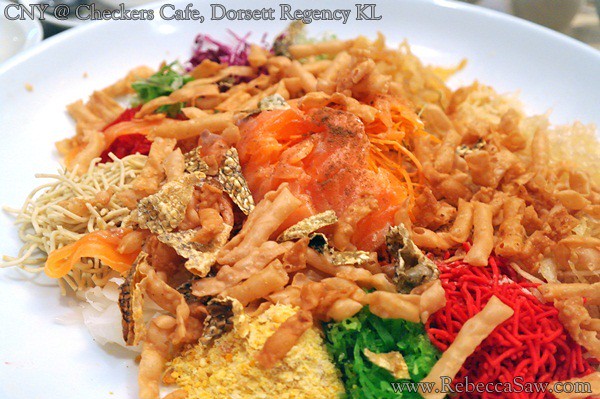 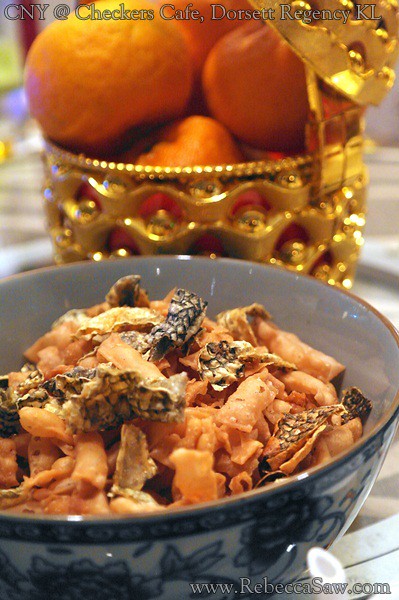 Toss Romaine Lettuce with Caesar dressing with choice of 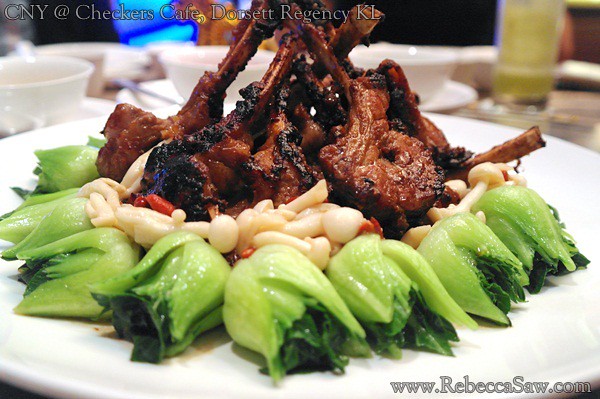 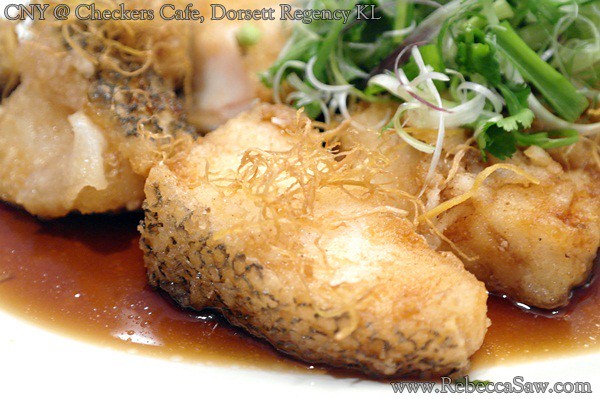 NOODLE SOUP OF THE DAY

I didn’t sample the whole buffet that night but was pampered instead with selected dishes from the kitchen. The Yee Sang was lou-ed (the customary act of tossing contents of the yee sang dish high in the air) and dinner commenced shortly after.

Below: Shark Fin Soup. Dried scallops, crabmeat, and assorted seafood in a light, flavourful broth with generous amount of sharkfin. 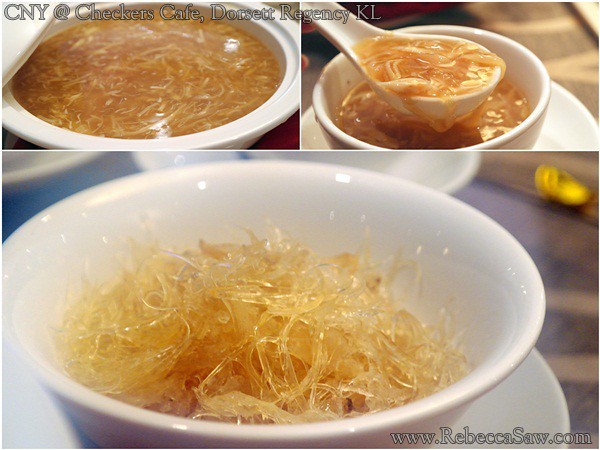 For those who refrained from consuming shark fins, you can opt for it to be omitted as the prized fins were only added into the soup prior to serving.
Here, I must extend my praise to the Chef for a flavourful soup which was neither starchy nor too thin in consistency.

Sipping the soup, I eagerly scanned through the menu for the night, wondering what else is in store for my stomach. My eyes were immediately reverted on the keywords “lamb”, “cod” and an interesting “fried rice with ginger & salted egg yolk” dish.

Finally, I thought with a sigh of elation – there’s something out of ordinary tonight! Yup, I’m not a hardcore traditionalist and I prefer my “traditional” food with a twist where possible. 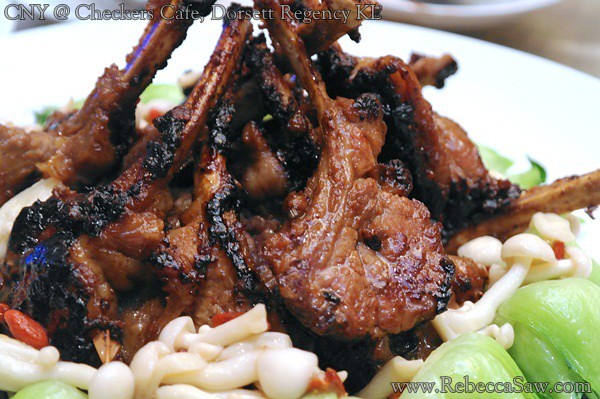 Happily enough, the lamb was perfectly pink, charred nicely for a smoky flavour & well seasoned with the chef’s special sauce. One of the best dish I had in my series of CNY reviews this year for sure. 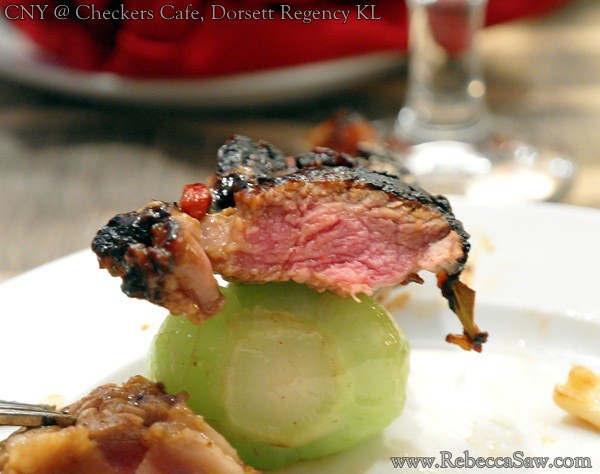 There were a few grumbles around that the Chicken in Herb wasn’t anything great. 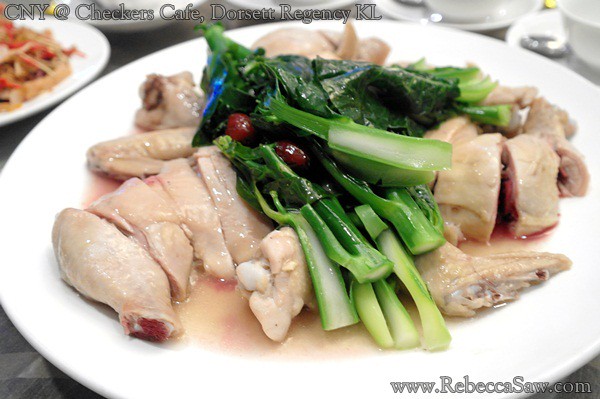 I however, beg to differ as I’m of opinion that the Chef has shown considerable skill in poaching the chicken where the bird retained a firm yet tender bite. For me, the dish shone in its overall simplicity.
It could be that I’m partial to herb infused dishes and thus I appreciated the chicken which was infused right to the bone with flavours of the herbs. 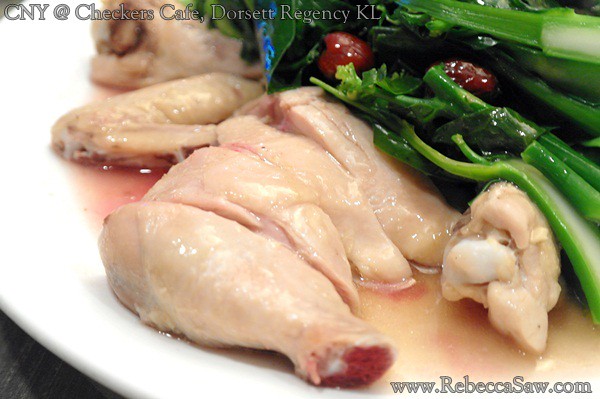 Either that, or I had way too many mediocre chicken rice where the chicken is tasteless and rubbery hence this was like hitting the jackpot! LOL!

Surprisingly enough, I enjoyed the cod fish though it was fried. I have always thought a delicate and oily fish like cod should be steamed or at most pan fried; then lightly seasoned, allowing the natural flavours of the fish to take centrestage in the dish. 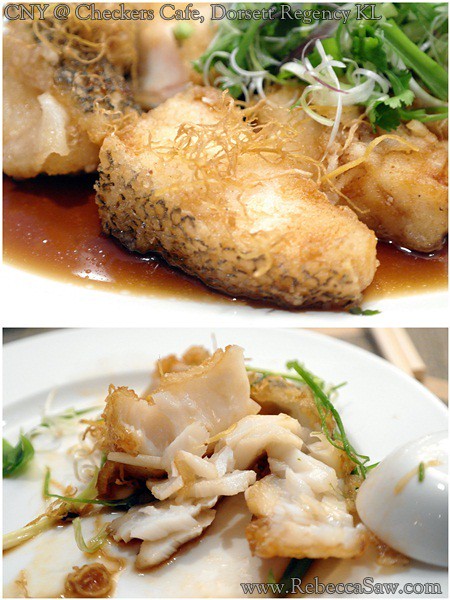 But Chef Lai did a superb job; the flaky fish was as fresh as it should be, lightly battered and fried prior to being doused in Chef’s superior soy sauce. The fish has not died in vain for sure. 🙂 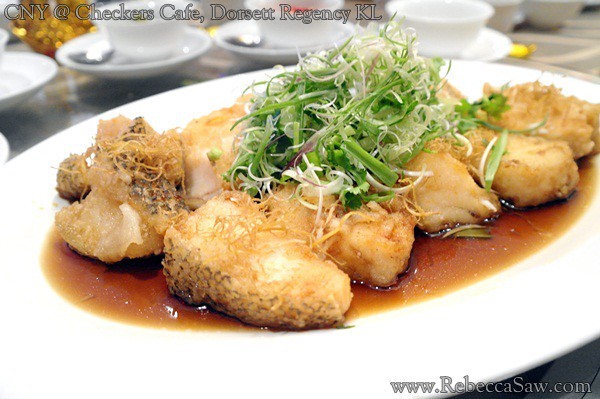 Once the lamb and cod were served, my focus turned to The Fried Rice with Ginger and Egg Yolk. The Braised Sea Cucumber and Deep Fried Prawns came and went, of which I neither noticed nor heard any complains about it. I trust both were satisfactory. 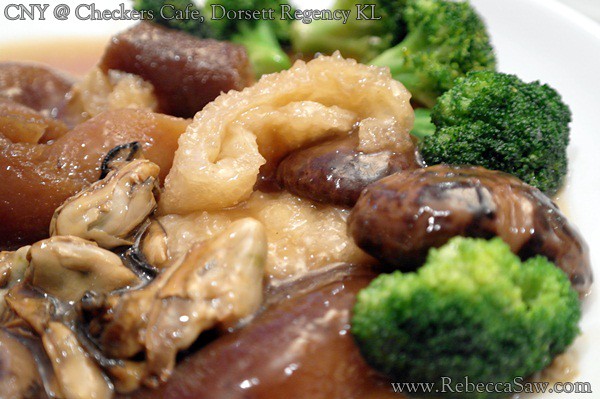 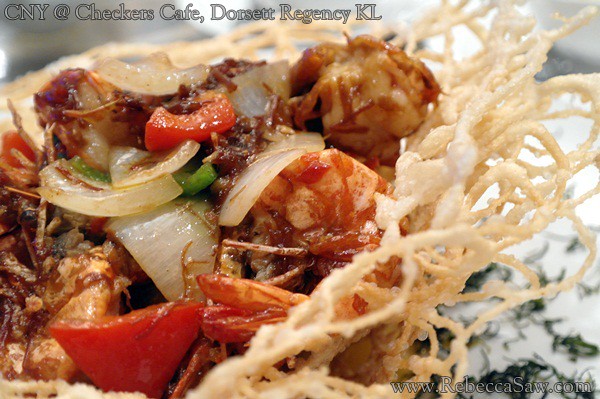 30 minutes later the fried rice finally made its appearance. It’s pale and unadorned presentation elicited some remarks from the table. I, however, just wished they get their pictures taken quick and leave me to dig in. 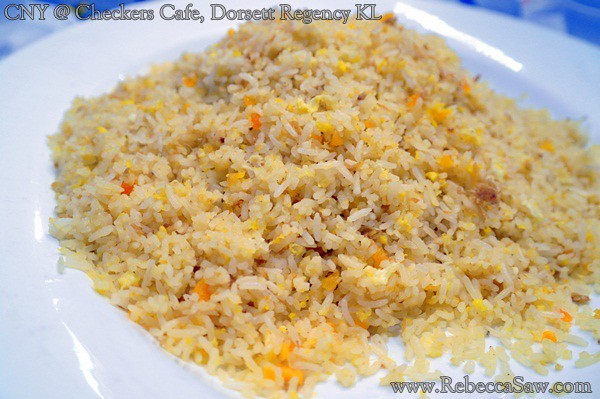 My fellow diners said it was a bit of a let-down due to the lack of wok hei. The salted egg yolk flavour was a tad light and we certainly couldn’t detect any ginger. Personally I liked it but that’s not surprisingly since I prefer my fried carbs (noodles or rice) to be lightly fried, non-greasy and midly seasoned.

It’s ok Chef , the rest might not be in favour of your fried rice but I think a bit more time on the wok and additional egg yolks will do the trick! 🙂

Finally we got to dessert at 10pm. I was about to pass out from exhaustion but was given a much needed sugar boost from the sweet red bean sesame balls & homemade nian kao.
The latter was very homely and Ii deduced that it was not commercially produced from the first bite. The red bean paste had the perfect texture; not too coarse nor too smoothly pureed. All the desserts served was of acceptable sweetness levels. 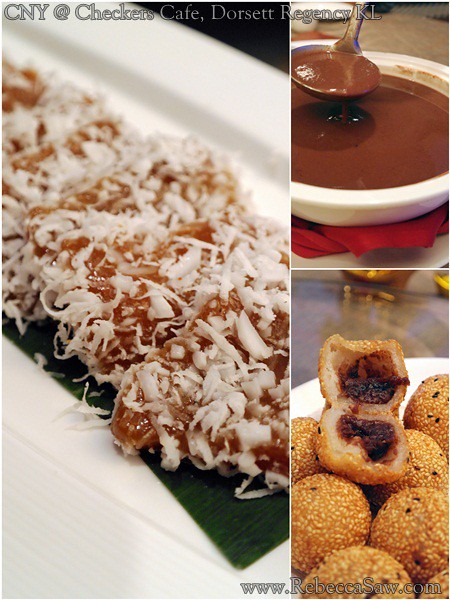 All in all, I would confidently recommend the food here at Checkers Cafe. The ramadan buffet I had last year was good and pricing-wise much reasonable compared to the other hotels in the vicinity of KL. Likewise, the Chinese Chef Lai has shown much aptitude in his craft of Chinese cooking; apparent in his homemade nian kou, poached chicken, lamb rack and the red bean paste.

Though Dorsett Regency has only one F & B outlet, the kitchen team doesn’t cut corners and order their Malay kuih and desserts (in this case the nian kou as well) from a supplier. Instead, everything was painstakingly made in the kitchen.
I find little details like this important as it showcases the kitchen’s ability and pride in preparing the best food they could.
I have dined at many hotels, most with larger team of cooks and bigger names with numerous F & B outlets. Some have a dedicated Chinese restaurant and dedicated Chinese chefs. Yet I found out that most of their items are sourced from suppliers instead of being made fresh in-house. 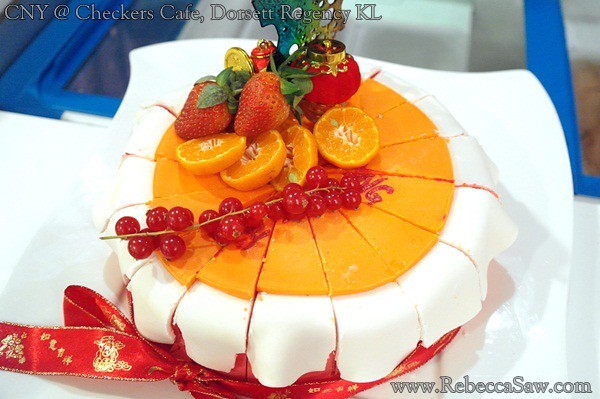 So do head over to Dorsett Regency this Chinese New Year and sample their buffets. Prices are as follows:

38% discount for RebeccaSaw’s blog readers (referral name must be quoted when making table reservation, so do say “Rebecca Saw” when you make your bookings!! 🙂 ).

Here’s the special link for you to make an online table reservation: http://dorsettregency.com/CNY-RebeccaSaw.

I assure you that I do not make any commission from this. LOL. I didn’t even know the hotel management was going to extend this offer till the next day when they emailed me about it.

If you have any issues or queries, drop me a comment here and I’ll try sort it out for you. Gong Xi Gong Xi! 🙂