At the point of sampling, I’ve had 6 Yee Sangs prior and this unarguably took the title of the best I have had.
The plate offers more fresh ingredients than the dried and fried items which I don’t really fancy. The salmon was the thickest served to me for yee sang so far and its fresh and firm flesh sure did made every bite of the yee sang even more enjoyable. 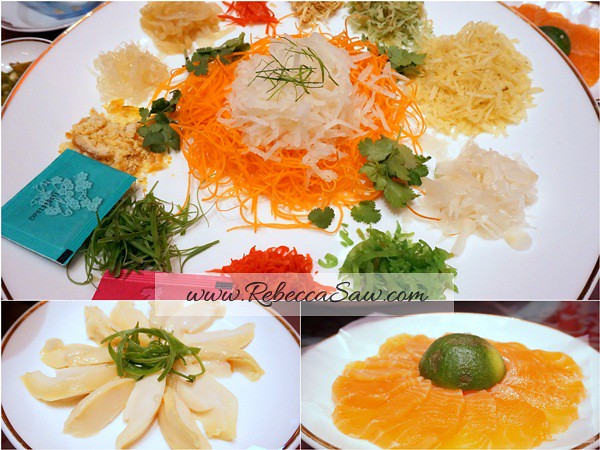 And of course, the climax of every yee sang lies in the sauce, the foil that binds every ingredient together.  I gave 2 thumbs up to the chef’s homemade sauce, thick, not-overly sweet with a lovely fruity flavour. 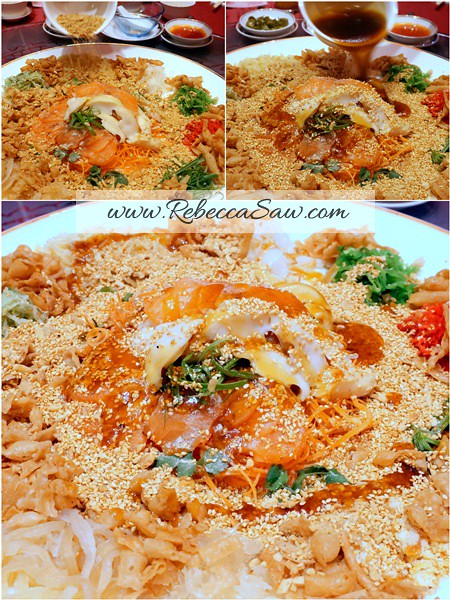 With the yee sang commencing lunch on a good note, I sat back, relaxed and hoped the other courses are just as promising. And Chef Lee didn’t disappoint.
I can only wish I get to sip on this everyday. The Double-Boiled Fish Maw with Sea Cucumber and Chicken Broth was made with only the finest ingredients as evident from the taste. The soup was subtly flavourful, yet also smooth and easy to drink. And oh, no worries about any lingering fishy aftertaste though sea cucumber and fish maw were added. The soup had none of such unpleasantness at all. 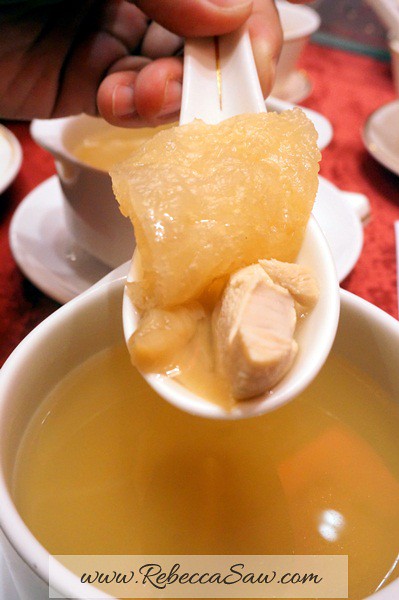 At the end of the preview, and if I had to make a choice, then the Oven Baked Rock Salt Chicken with Herbs takes the title of the best dish of the day. The chicken meat was tender yet imbued with enough flavour from the result of baked salt and the stock base. A touch of herb added a wonderful flavour and complements the saltiness of the chicken. Chicken (prepared Chinese style) never tasted so good! 🙂 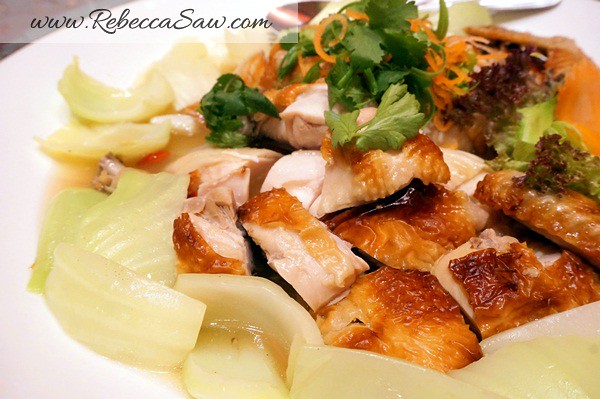 Fish is a must have in all Chinese New year’s meal as it symbolizes abundance of wealth.  West Lake Garden’s Canadian Cod Fish Steamed with Golden Garlic Superior Soy Sauce is also a strong contender for the best dish of the day.
The cod was frankly, faultless. The flesh was fresh and flaky, and the simple execution of this dish brings out the natural flavour and sweetness out of it.
I was informed that the chef imports all his stocks (dried scallops, waxed meat, soy sauce, etc ) from Hong Kong, the Mecca of Chinese ingredients. Well I can attest to that. For one, the soy sauce used for the cod dish was pristine with a delicate balance between sweet and salty. It’s certainly not plain in-your-face saltiness which is what you normally get using the more common soy sauce brands in the market. 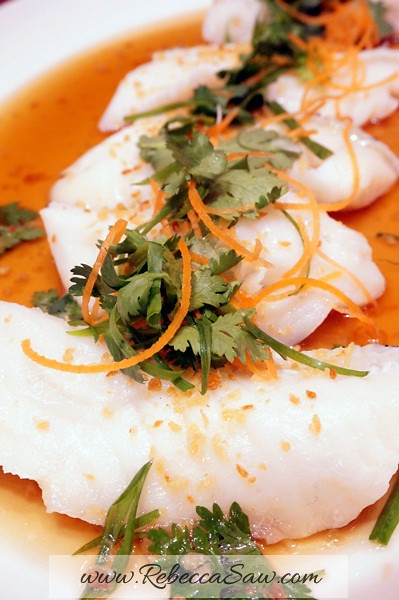 Deep-Fried King Tiger Prawn with Pumpkin Sauce was next in line for our gastronomic pleasure. The pumpkin innovation was intriguing on paper, and matched in taste. A mild grouse I had was that the pumpkin sauce did taste a tad too mild for the bouncy prawns. 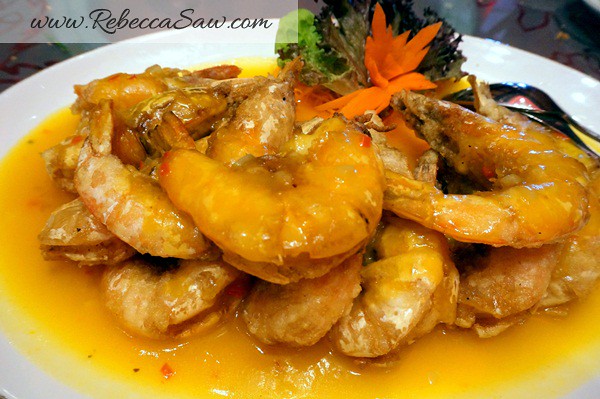 I thus suggested that such a mild sauce to be cooked in contact with the prawns so the flavour would envelope the prawns better. But Chef Lee explained that he had experimented with that method of preparation but the result was rather unsatisfactory as it made the prawns soggy.
Hence, in order to preserve the crisp of the deep fried prawns, Chef Lee chose to pour the sauce over just before serving to retain the crunch of the prawns. 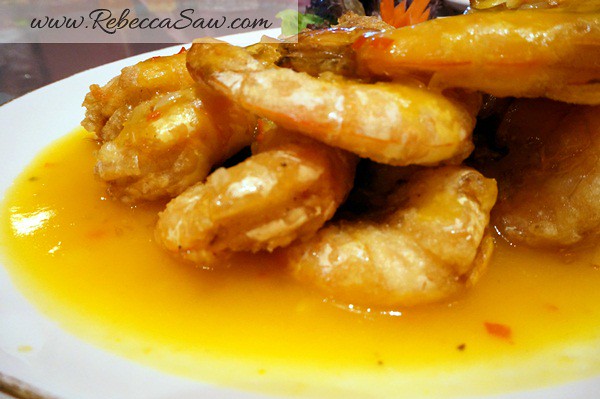 Braised Sea Cucumber with Dried Oyster and Black Moss is a constant dish in every review that I have attended but this preparation has been the best. The stew wasn’t as starchy as the usual version we’re all familiar with and instead of boring ol’ broccoli,  the chef substituted it with small Chinese cabbages. Nice! Small touches to an otherwise old favourite that made the dish more palatable.Quite a refreshing and welcoming change, in my humble opinion. 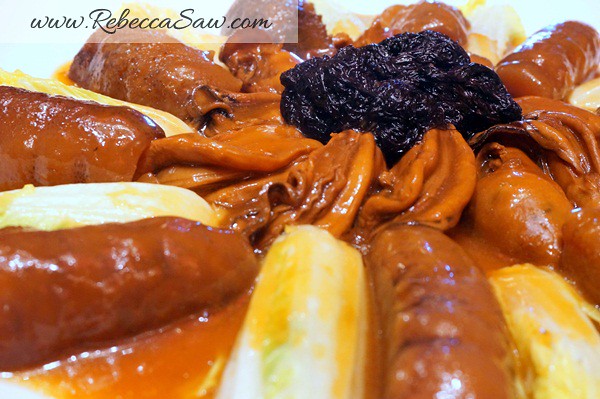 Egg Noodle Stew with Chinese Mushroom and Shredded Clams is a dish that symbolizes longevity.  Despite its simplicity, this dish is surprisingly good. The noodles was springy with a toothsome bite and was topped generously with mushrooms, carrots and bean sprouts. 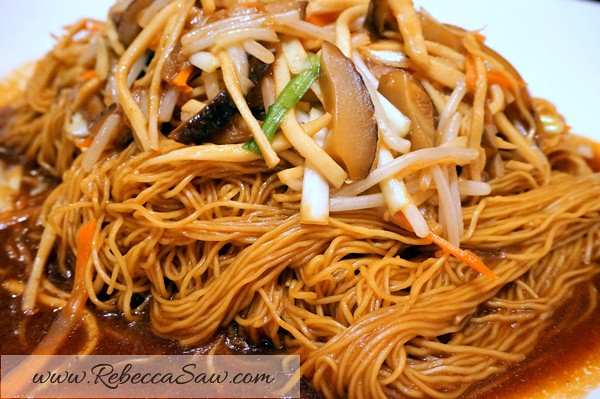 Our meal ended with a waltz of duet.
Chilled Sweetened Eight Treasure and Chinese New Year ‘Nian Gao’ gave the entire meal an appropriate sweet ending. The Nian Gao was made in house while the chilled sweetened eight treasure was a refreshing.
As the name suggests, 8 ingredients made up the chilled dessert; aloe vera, lotus seeds, lily bulb, ostmanthus, sea coconut, dried longan, white fungus and rock sugar. Basically, the chilled dessert symbolizes abundance of good luck, hence the focus on the number ‘8’. 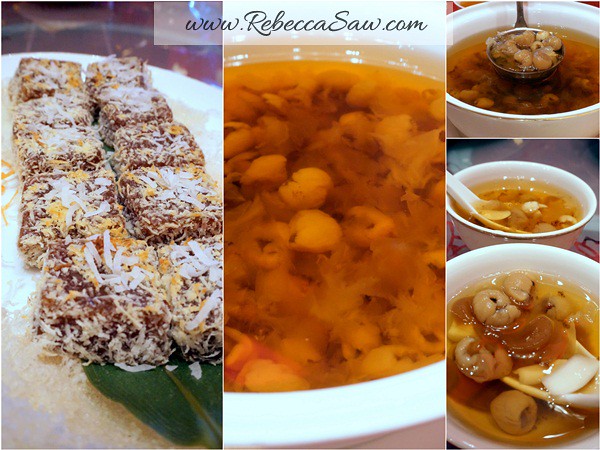 All in all, it was a truly enjoyable meal. The feast offerings was fabulous despite the fact that the meals are all pork-free. Prices are not too exorbitant either. Like most restaurants out there, West Lake Garden is offering Chinese New Year’s course meal too to usher the year of Water Snake. Their price range from RM1088++ to RM2013++ for a table of 10 persons and will be available from 11th January 2013 to 24th February 2013:

Sea Cucumber and Duck Stew with Chinese Mushroom in Casserole 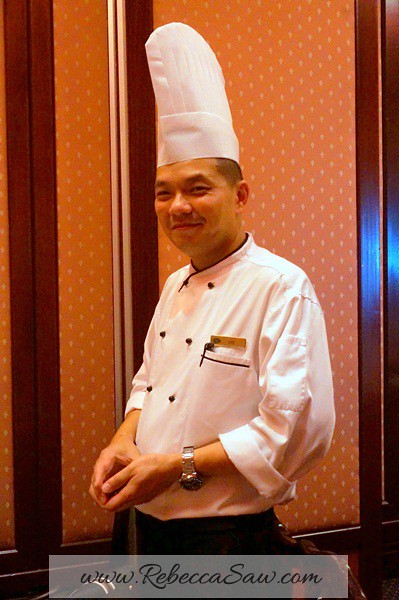 Do note that a divine visitor will make a special appearance on the first three days of Chinese New Year at West Lake Garden in the form of Choy Sun Yeh the God of Prosperity to bestow tokens of health and wealth to diners of the restaurant. Should you want to dine there and meet the God of prosperity himself, do call up to make a reservation: