It’s been a long long while since I stepped into Celestial Court in Sheraton Imperial Kuala Lumpur. 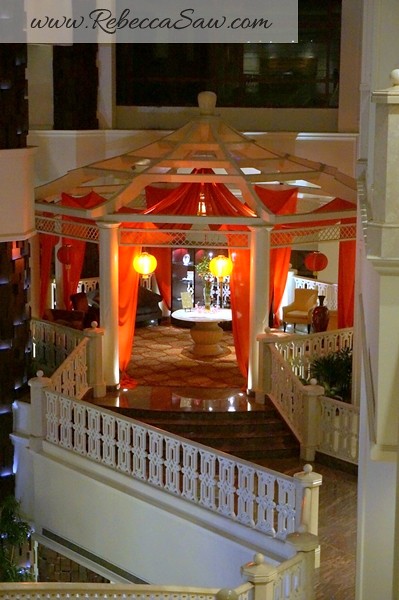 Though it’s a pork free outlet, Celestial Court has always consistently maintained its reputation for stellar Cantonese cuisine. For our sneak preview of the Lunar New Year feast, the Chef has some surprises in store for us, though first impressions from the printed menu didn’t give any inkling of what lies ahead. The menu outlined pretty ordinary items, so I sat back complacently and waited to be fed.

The mahjong tiles inspired a raised eyebrow. Almost forgotten in our modernity, I suddenly had flashbacks of old folks chattering on the top of their voices while loudly shuffling the tiles on the table. There were no mahjong match that night, but I thought these mahjong tiles accompanied by imitation gold ingots makes really good table top decor nonetheless. After all, the mahjong tiles and the gold ingots represent wealth and prosperity, both highly desired attributes for all. 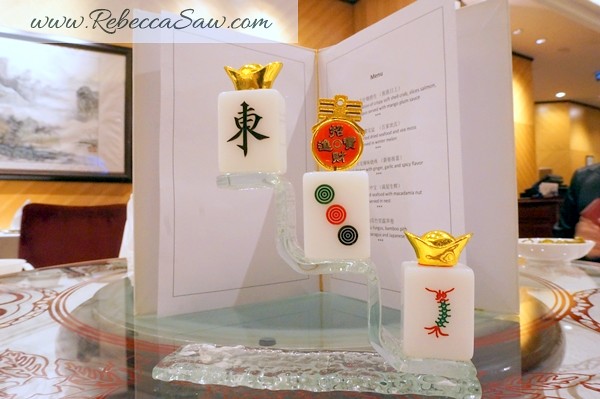 Anyway, let’s put  the discussion on mahjong aside. I wasn’t there for any Mahjong session, anyway, though I wish I was. The first dish was of course, the customary Yee Sang. The Specialty Yee Sang was artfully plated like a snake, a second one that I have seen other than at Five Sen5es, Westin.
This yee sang is probably the one yee sang that I have had that boasts of the most ingredients. In addition to the usual fresh shredded vegetables, there crispy soft shell crab, caviar, salmon slices, Japanese octopus and was served with refreshing mango plum sauce. The mango taste was not distinctive enough for me, same fault as the one at Armada Hotel. In conclusion, I’m of opinion that all fruit puree based yee sang sauce would either have to be more concentrated or doubled in volume per serving. 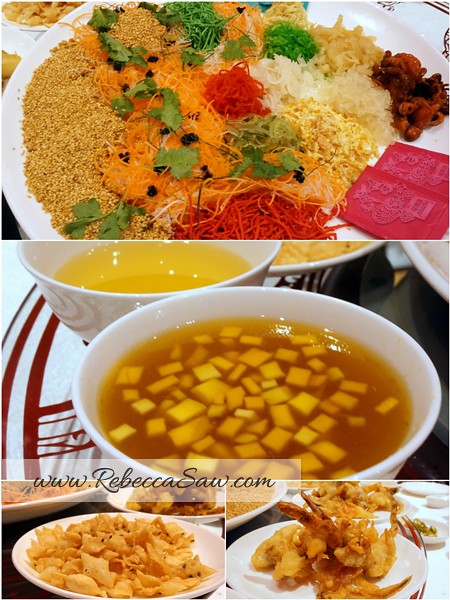 If you fancy caviar in your yee sang, then book a table at Celestial Court quick! 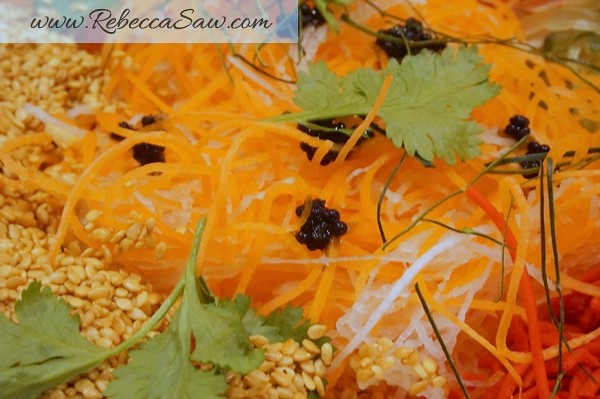 Oh, you’re not quite as convinced? Ok, stay with me then.

Next we had Braised Assorted Dried Seafood and Sea Moss served in Winter Melon. I would yawn inwardly whenever I’m served with this course, as it’s usually broccoli with black moss and sea cucumber. Any variation of this are very much welcomed, and this rendition was indeed refreshing. I really enjoyed the winter melon, but took an obligatory bite of everything else. 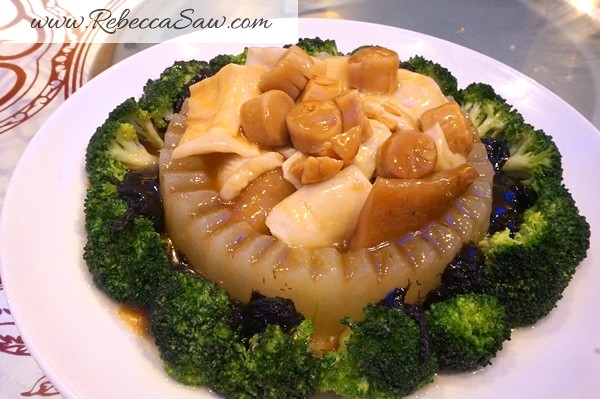 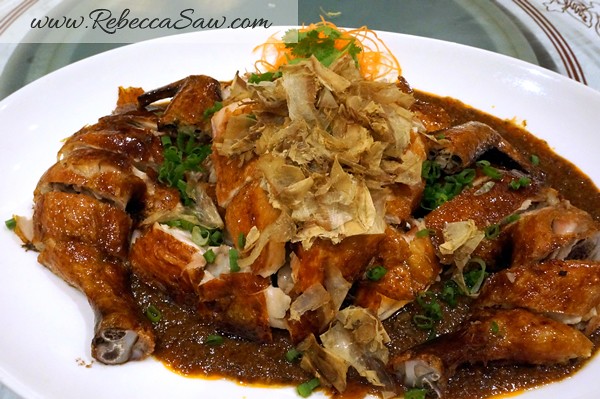 The bird was first roasted before it was bathed in hot oil to attain that perfect crisp skin. After it was chopped and plated, a generous amount of bonito flakes were arranged on top of the chicken. A brilliant inclusion, as the bonito flakes imparted a very savoury “umami” flavour to the the crisp skin and the moist meat. 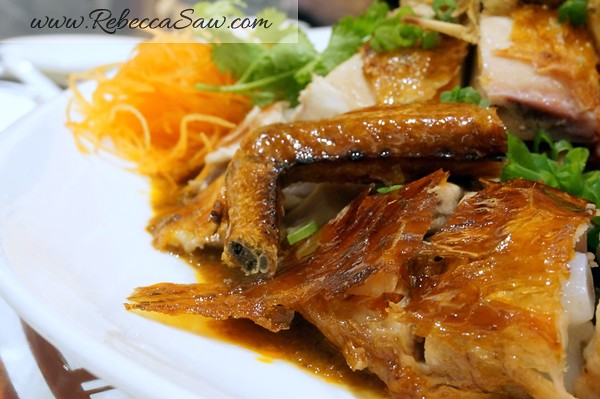 Being a Penangite and appreciate of distinctive nyonya flavours, I loved the familiar assam-like taste of this dish. Kudos to the chef for such a magnificent recipe! This was certainly a fowl dish to remember. 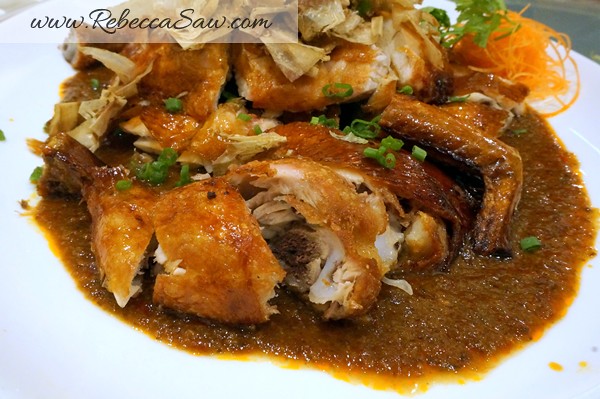 Wok Fried Assorted Seafood with Macadamia Nut served in Nest consists of fresh scallops, fish and a medley of seafood including succulent prawns. Both the macadamia nuts and crispy vermicelli were addictive. Our fish/seafood dish of the night was this. 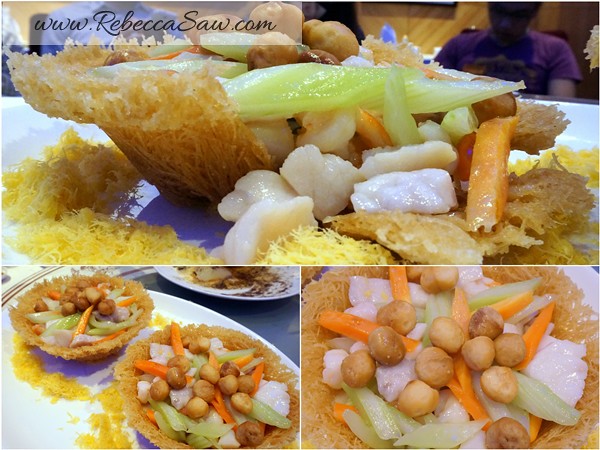 Braised Yu Fungus, Bamboo Pith with Australian Asparagus and Japanese Bean Curd was artfully presented like a blooming flower. I like every element of this dish; the asparagus, japanese bean curd and especially the bamboo pith. Its skirty lacy texture allows it to absorb liquid very well and I love its tender, crunchy bite. 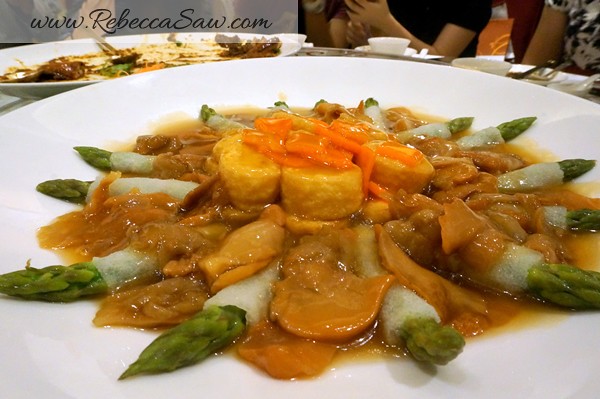 Deep Fried Prawns served Minced Nutmeg, Sesame and Mayonnaise dressing. If you’re a regular reader of my blog, you would have known that I’m not a fan of prawns or anything with mayo. But this dish is one of Celestial Court’s signatures, so I took an obligatory bite of half a prawn. It’s as good as fresh deep fried batter prawns can get, crunchy and sweet, though a bit too much mayo for my liking. However I do see why it is popular. The dressing is actually quite tasty, and I know Chinese people in general loves deep fried battered seafood with mayo. 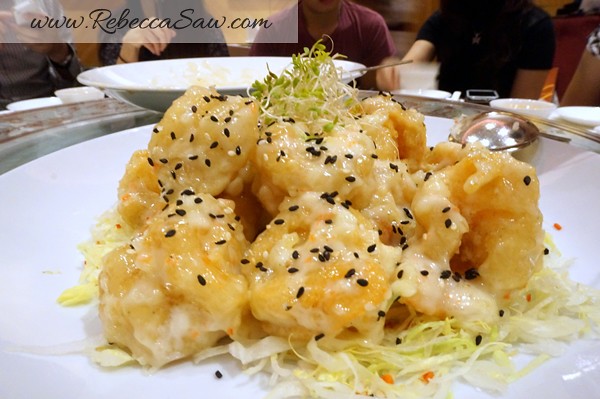 Sauteed Osmanthus Clam, Shrimps with XO Sauce and Garden Greens had me perplexed. After so many seafood dishes I was wondering why another prawn dish?? And asparagus again? Why?

Well, since it was served, I took a prawn and one of the slippery long thing. This wasn’t on the menu so no prior hint were given was this I took for granted that it was bamboo clams as it did resemble the long rubbery mollusk. 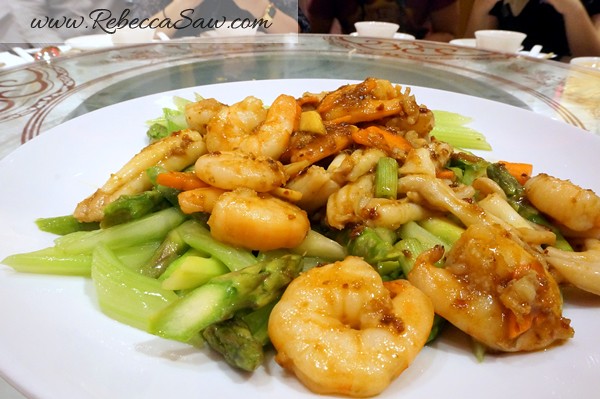 Overall the dish bordered on good and no surprises. But hell was there a surprise in store for us! The surprise only came at the end of the night when the chef revealed what it was; which officially made it the highlight of the evening.

Have you guessed what it was yet?
Ok, you don’t?

Oh my god? Yes, indeed “oh my god“. The chef showed us the raw version as well. Pretty errr…cool, huh?
It may look gross and disgusting to some, but the sea cucumber is known to have medicinal and aphrodisiac properties, so I guess it is quite appropriate to serve sea cucumber intestines during Chinese New Year’s feast as it signifies health and fertility to those who consumed them. LOL! :DD 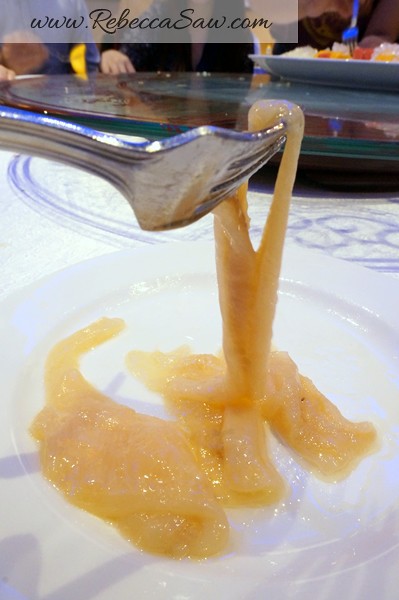 Dessert was Pumpkin Purée with Coconut Gelato which was superbly rich in coconut milk flavour and made even milkier with pumpkin puree. It was a welcoming sight in comparison to the usual ‘tong sui’ or ‘nian gao’. Nevertheless, I would have preferred a stronger pumpkin flavour. 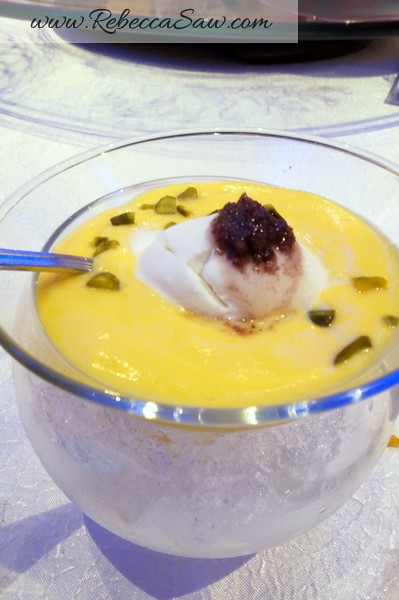 Overall, the dining experience in Celestial Court Sheraton Imperial was satisfactory and pleasant. Nothing too extreme that it are overwhelming to the senses, dishes that were artfully presented and adeptly prepared and a Chef that has quite a knack of springing a few surprises here and there. I appreciate the fact that they go all out to please the diners.

Celestial Court offers 3 exclusive 9-course set menus for you to choose from – the Wealth Set Menu, Fortune Set Menu and Happiness Set Menu.
The prices for the 3 set menus are at RM1488++, RM1688++ and RM1988++ respectively per table of 10 persons. These Chinese New Year menus will be available from 7 January to 24 February 2013. The a la carte Chinese New Year dishes are priced from RM38++ onwards each.

All these menus are inclusive of a complimentary bottle of wine and if you were born in the Year of Snake and hold an event during the Chinese New Year period with minimum spend of RM1000, you will receive a cash voucher worth RM300 nett too. Awesome, isn’t it? I certainly think it is! 🙂 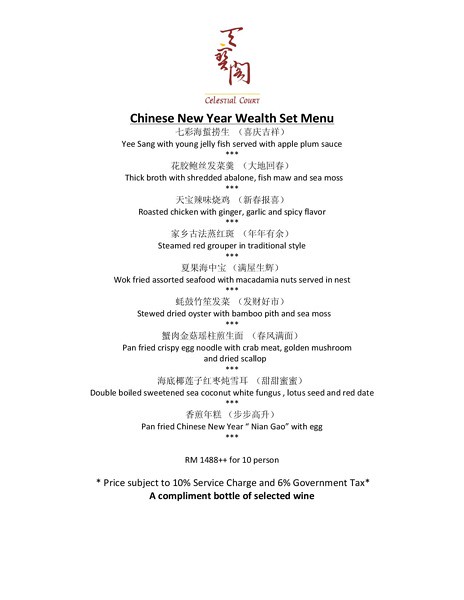 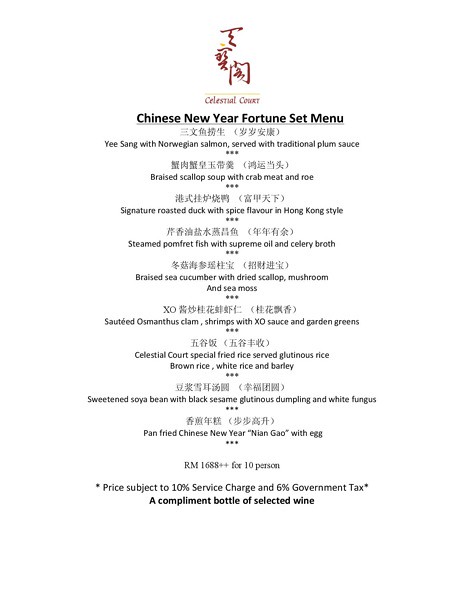 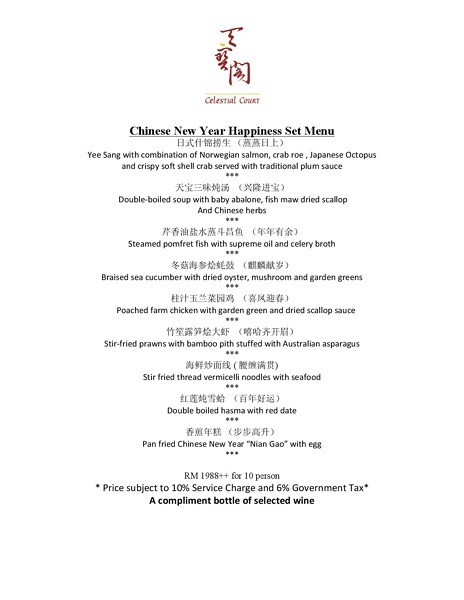 In addition to the dining and event deals, the hotel will be offering a special Chinese New Year room package. Guests who confirm their stay in between 1 January and 17 February 2013 will enjoy a whole lot of extra goodies such as Celestial Court 4-course set menu including a Salmon Yee Sang for 2 persons, a complimentary 30-minute shoulder or foot massage for those born in the year of the Snake and complimentary breakfast for 2 persons (daily). This package is priced from RM398++ per room per night onwards.

Also not to be missed is the spectacular Lion Dance performance which will take place on February 16, 2013 at 12.00pm at the Lobby of Sheraton Imperial Kuala Lumpur Hotel.