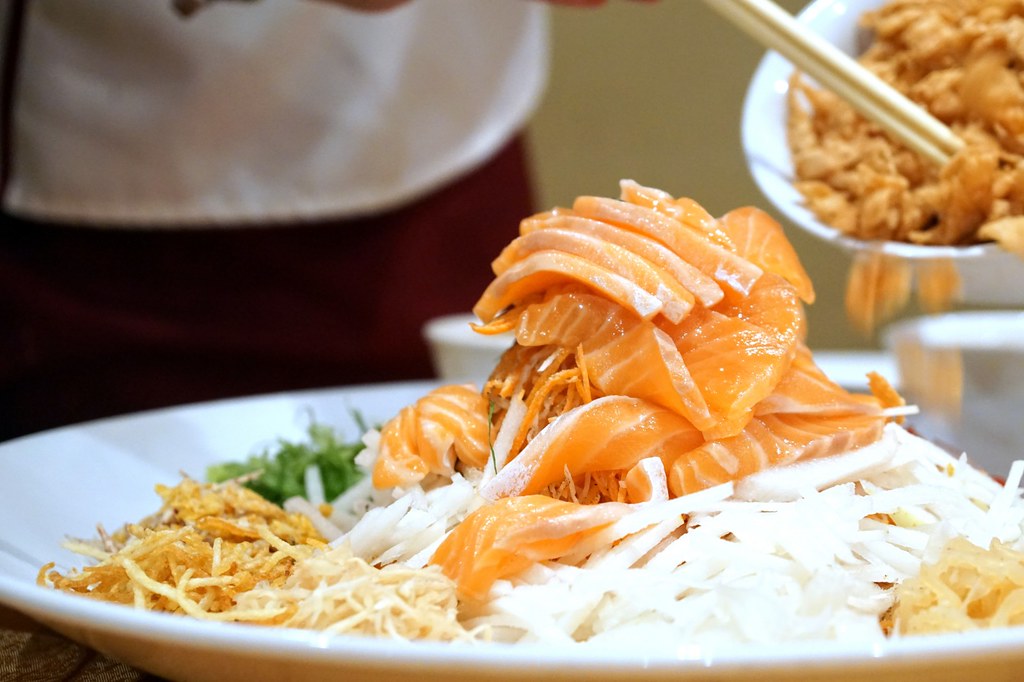 Although it has only been 3 weeks into Jan, it had been terribly hectic. I had no choice but to wind down the food review sessions.
Instead of the 10-15 CNY dinners ritual I did annually, I only made time to attend a selected few this year.

Xin was one.
And happily enough, Xin did not disappoint. 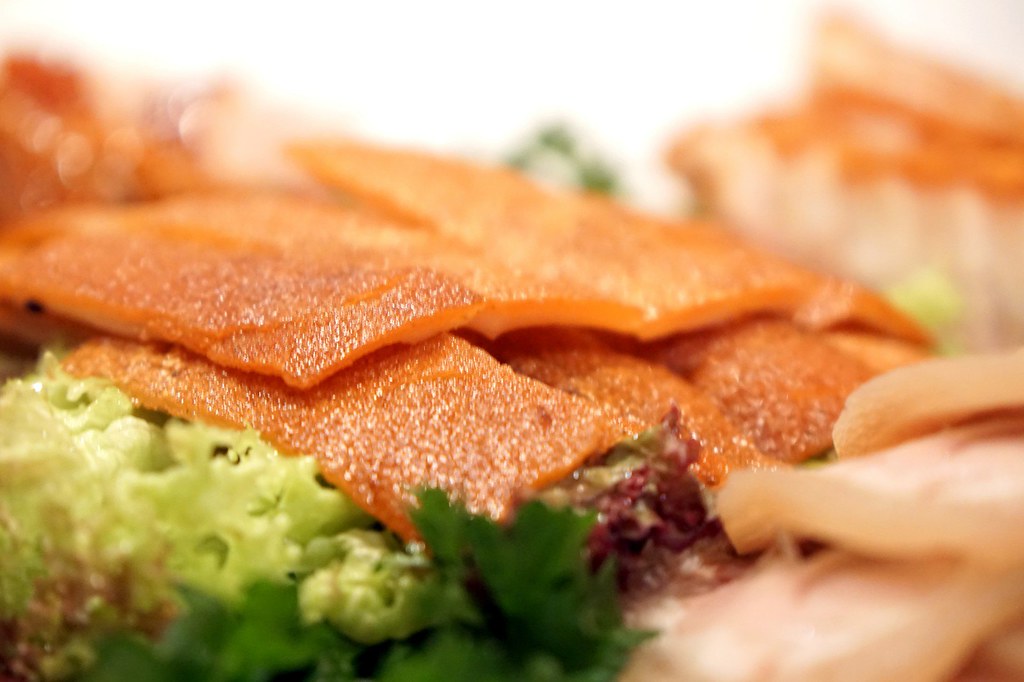 I sat down in anticipation of pork, pork and more pork.
I’ve been cooking at home a lot lately but my culinary skills are mostly confined to chicken breast and fish. The craving for pork had intensified recently!

After a quick toss of yee sang made refreshing with fresh, sweet pears we were served this Meat Platter which made my eyes popped wide and a big silly grin to split across my face. 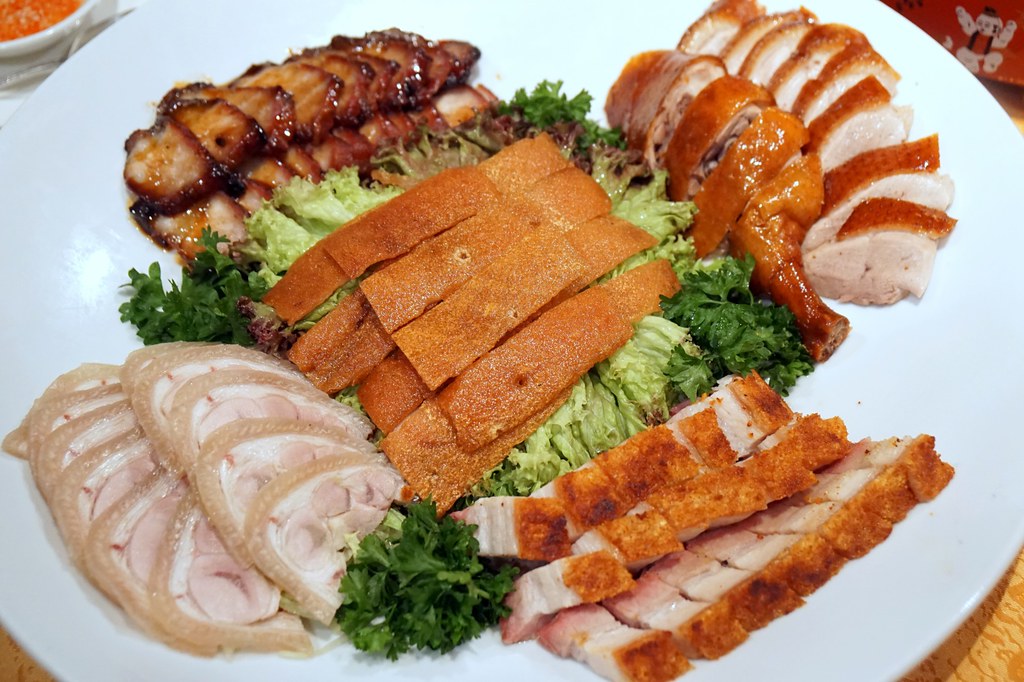 It is a carnivore’s (specifically a pork lover) dream come true.
There were poached pork slices with chilli vinaigrette (served cold and it is flavourful on its own so there wasn’t really a need for sauce), roast pork belly (crackly skin, juicy meat and balanced level of saltiness), tender slices of char siew (BBQ pork) with layers of soft fat, juicy duck with shiny, crispy skin and rectangles of brittle pork skin.

In short, everything on this platter was superb. 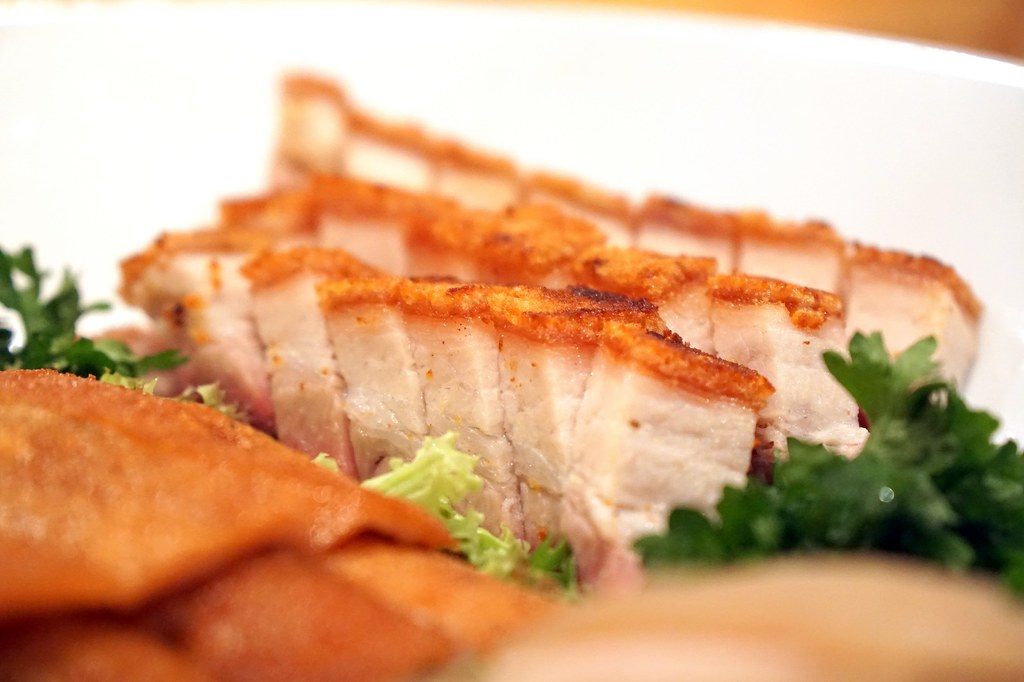 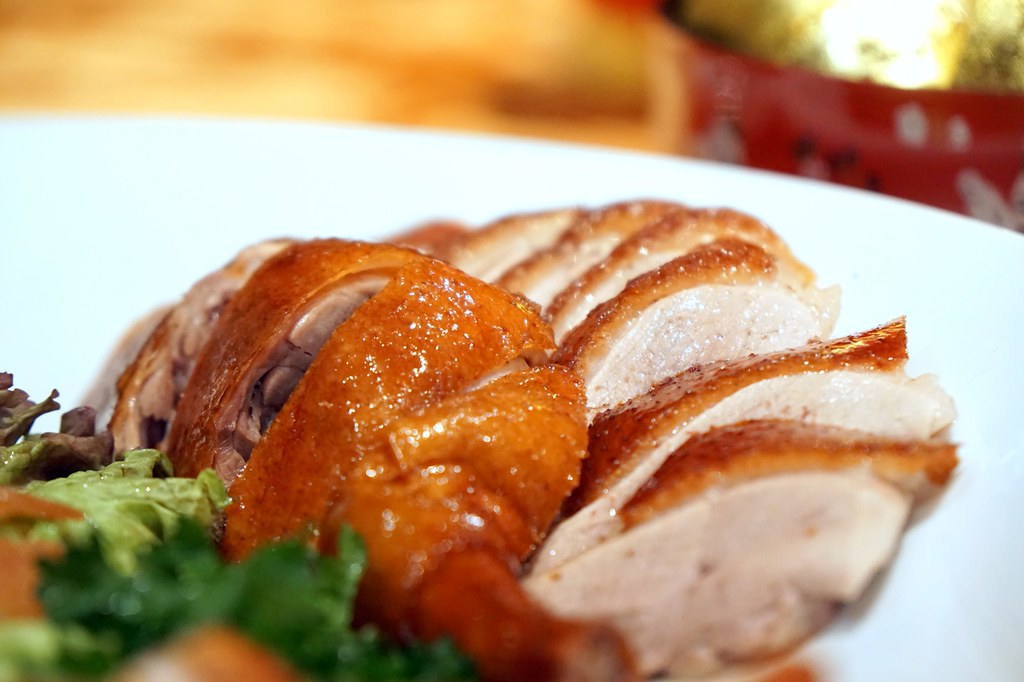 Piling my plate with the meats, I glanced at the menu and noted with gladness that there isn’t any sharkfin on the menu. Instead we enjoyed our soup with generous amount of dried scallop, crabmeat and white jade abalone. 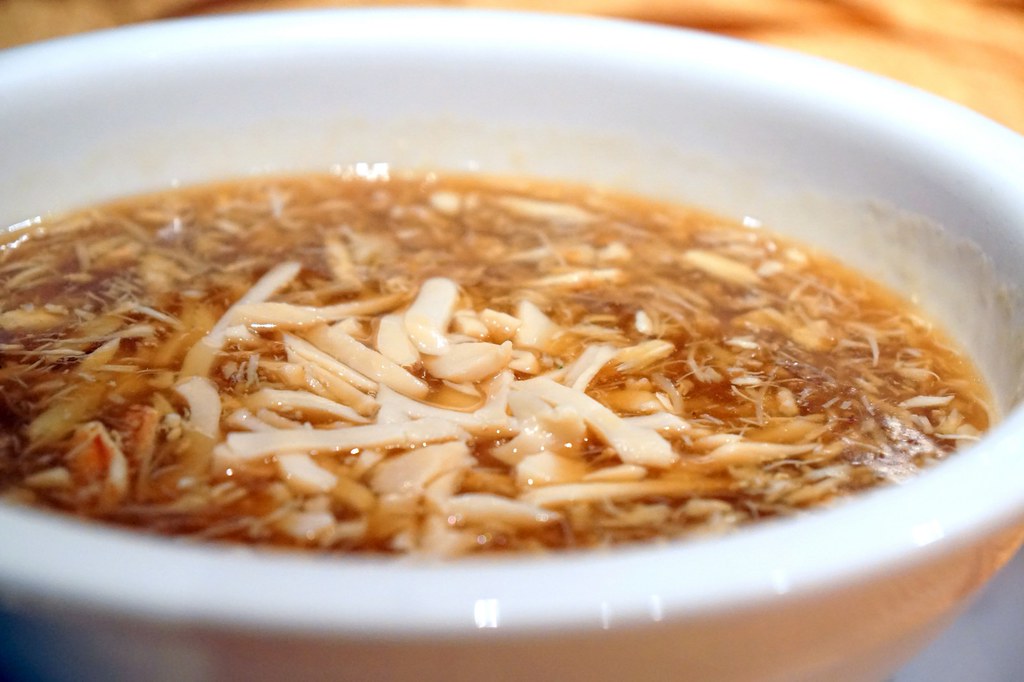 The fish course is my favourite one for such Chinese banquet dinners.
Our steamed dragon garoupa with superior soy sauce was simple but executed with finesse; flaky soft flesh nicely flavoured with the premium sauce. 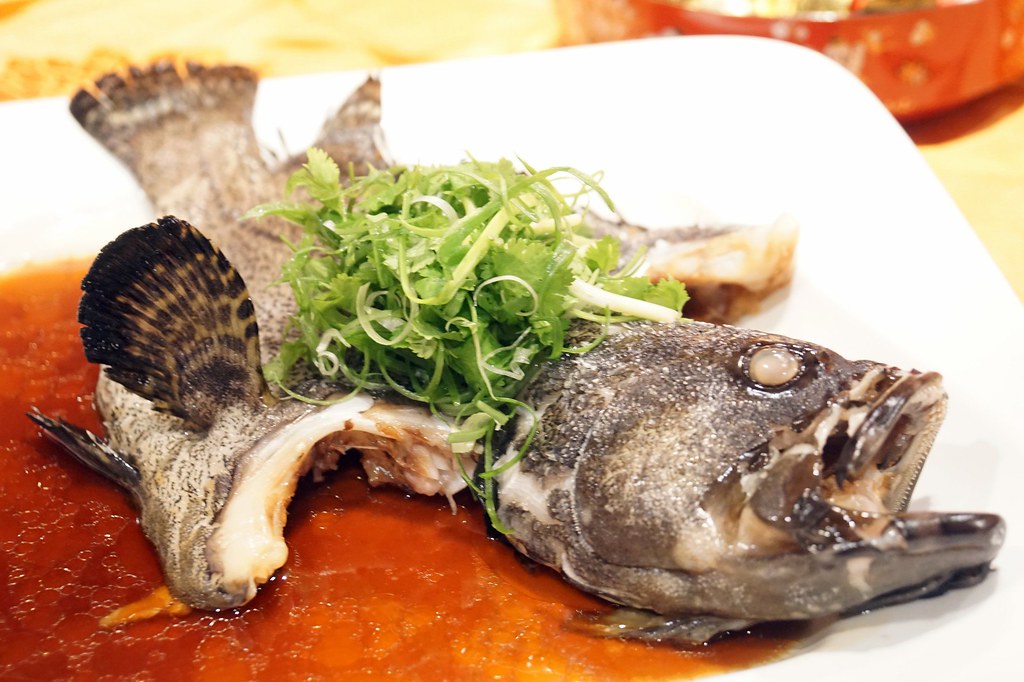 A prawn dish is a must for the traditional Chinese New Year dinner and we really enjoyed these large wok fried prawns which was coated with fragrant, chilli dried shrimps and XO sauce.
That just gave me an idea… I should flavour more of my meals with sambal shrimps! 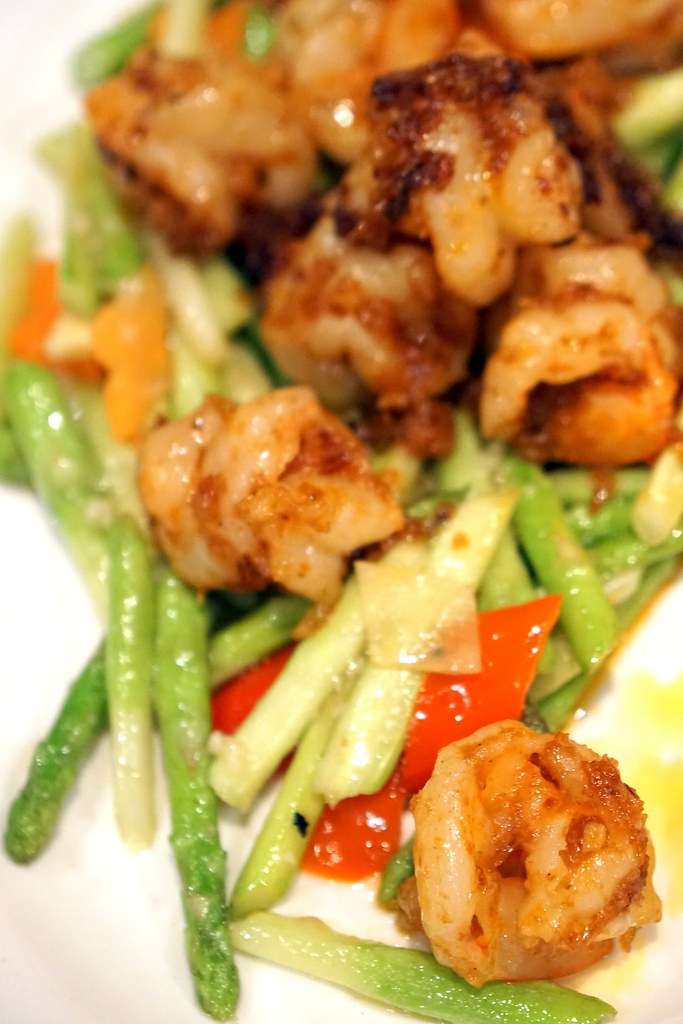 Instead of waxed meat and sausages in claypot rice we opted for the Egg Noodles with 2 varieties of Preserved Chinese Sausages.
The noodles are thin and springy (Cantonese style) and tossed in sauce. The sauce was kept light as the premium wax sausages were very flavourful and fatty. 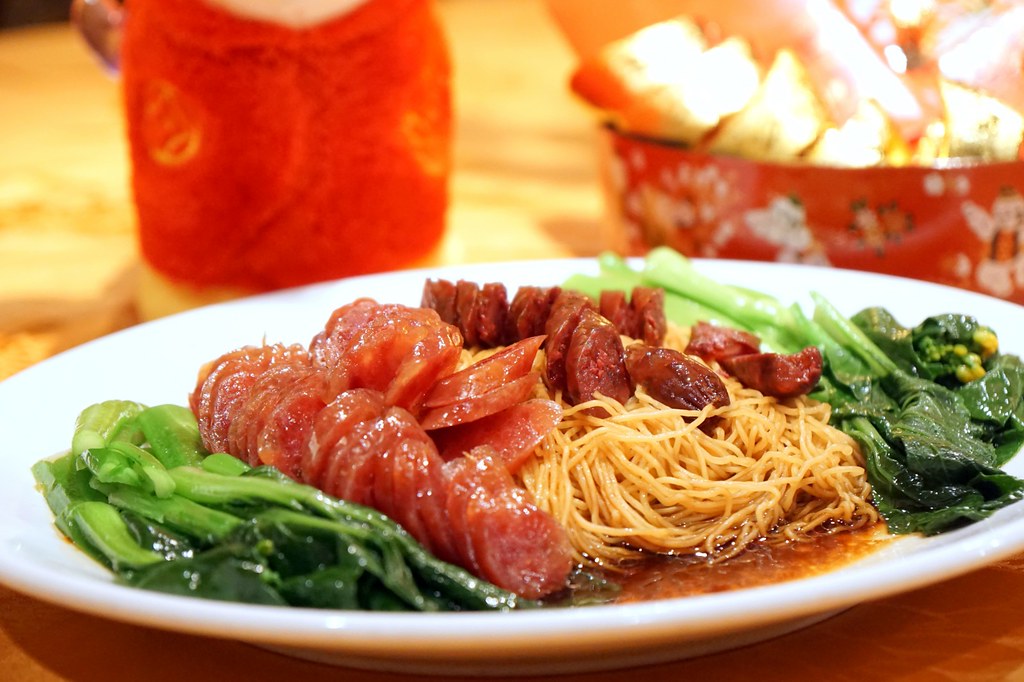 Now other than the fish, I love my Chinese desserts, especially the tong shui (Chinese sweet dessert soup) versions.
I would set aside stomach space for the last course of the Chinese banquet dinners because I love my desserts that much! 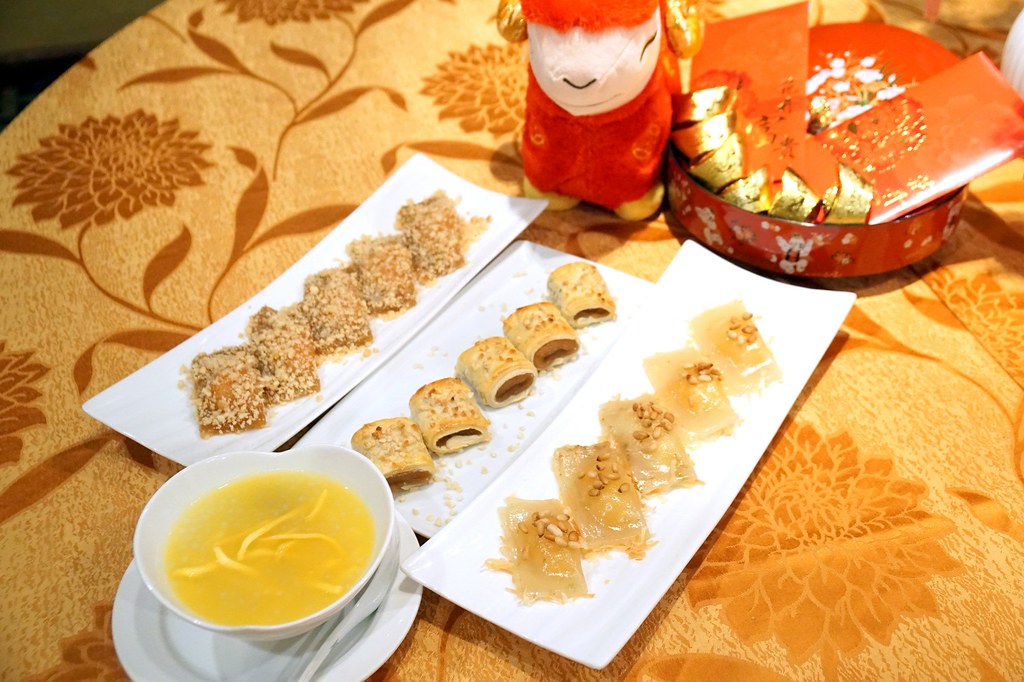 Xin’s specials for this year are the chilled jackfruit puree and a trio of unique nian gao.
I love them all, especially so for the nian gao creations.
The problem I had with nian gao is its sticky sweetness. Usually I could only stomach 2-3 bites as it just felt too “heavy” and sweet.
The creations by chef this round made use of the nian gao but sparingly. It is incorporated into pastry or stuffed with coconut and pureed potatoes.
So though the element of tradition remains (nian gao was served), the unique taste of each nian gao dessert put the fun back into eating nian gao! 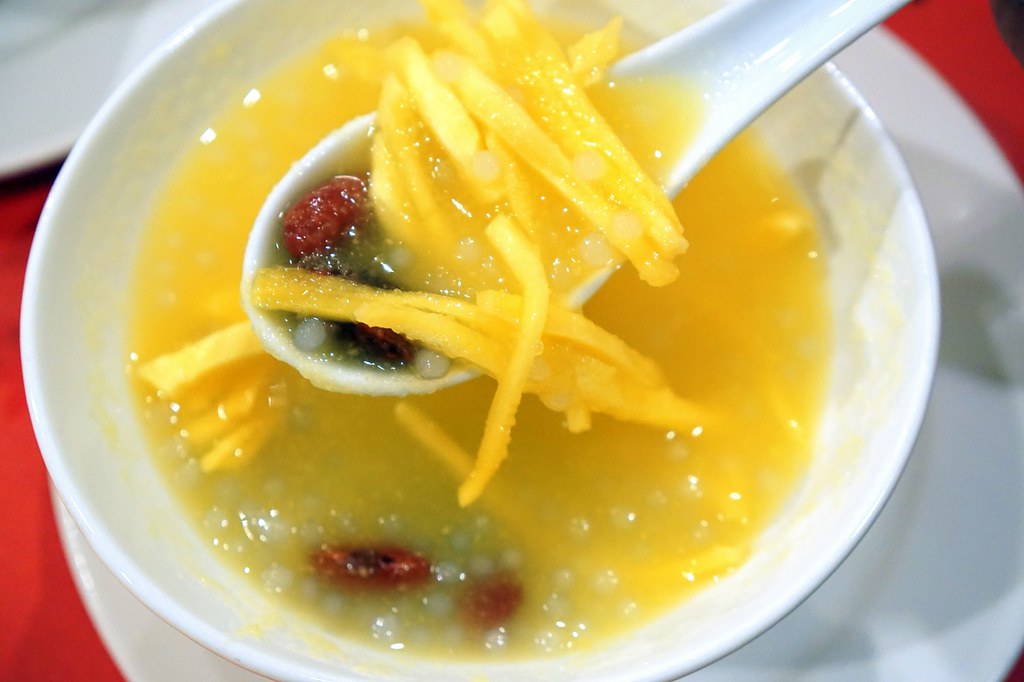 Sweet Potato Nian Gao with Macadamia Nut – (RM9.80++) per portion.
A pocket of soft, sticky yet not overly sweet nian gao (sticky rice cake) with sweet potato mash. A generous sprinkling of macadamia over it added a nutty bite. 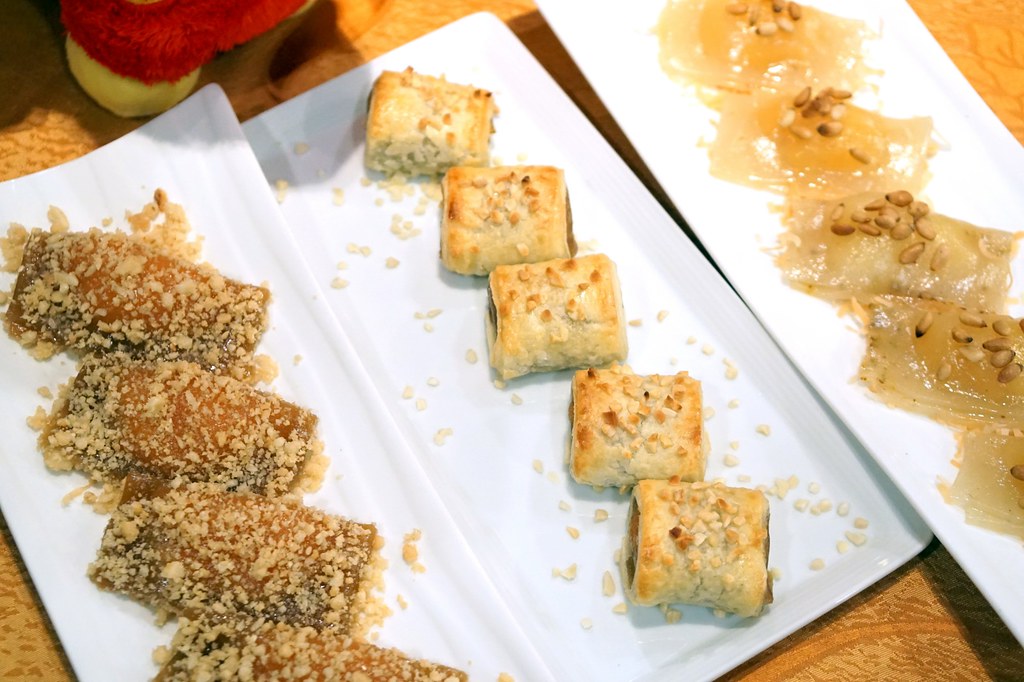 Pine Seeds with Osmanthus Nian Gao – (RM9.80++) per portion.
The sticky rice cake is flavoured with Osmanthus and each “parcel” guards finely shredded dessicated coconut within. 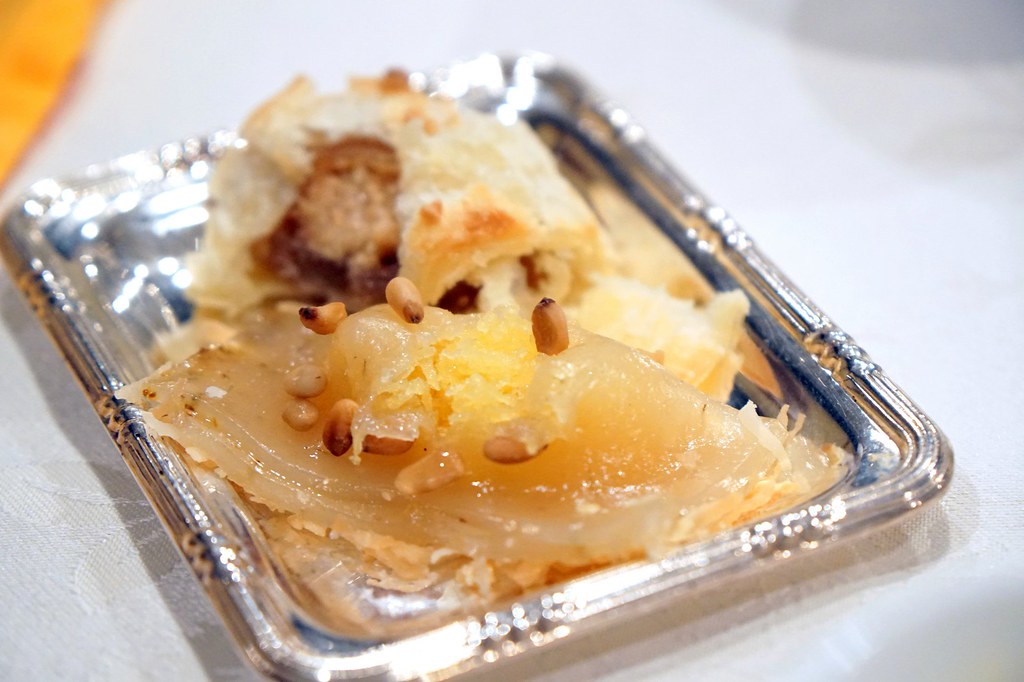 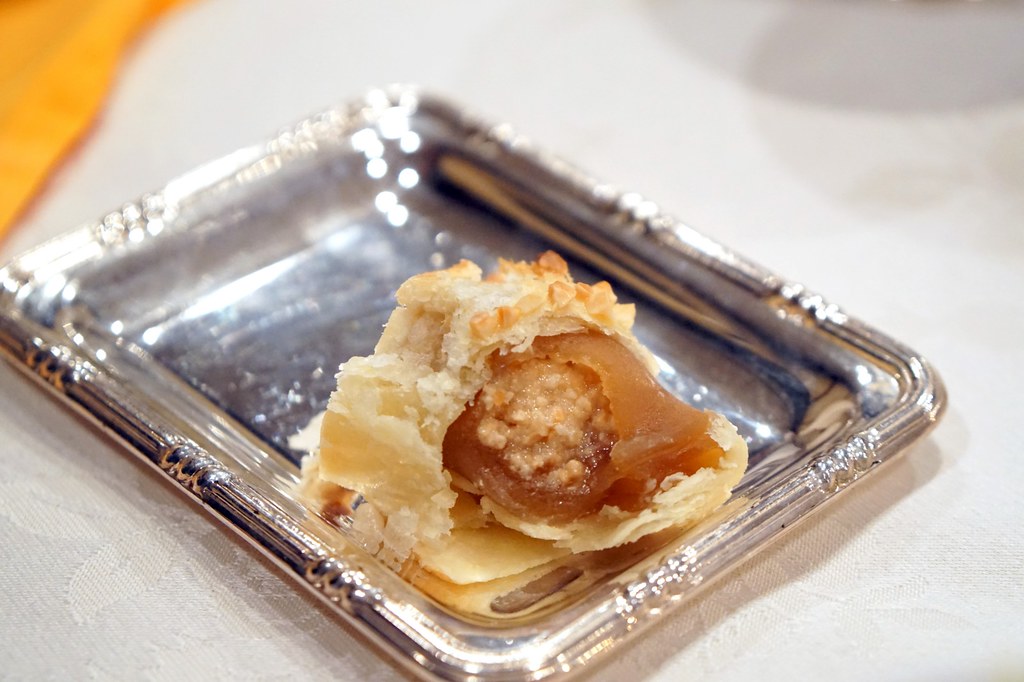 Another great meal at Xin. No wonder their Chinese New Year 9-course dinners are fully booked every year!
Concorde Hotel is offering Reunion Buffets as well starting from 18th Feb to 20th February at the price of RM118++/pax.
The annual World Champion Lion Dance performance is on 20th February from 11am onwards at the lobby. Do visit Concorde to witness the acrobat performances by the world champions Kun Seng Keng. They are world champions for a good reason.

Check out Xin’s Prosperity 9-course set menus which starts at RM1,188++ per table, RM1,388++/table and RM1,588++/table.
Each menu comes with an exclusive wooden Treasure Box. Begin with traditional yee sang and continue to savour traditional offerings.