Every year I would sit in some of the Midsummer Nights Feast dinners. This year, most of the dinners are closed affairs, and Chef Hom and Chef Johann’s was the very few that I had the good fortune to dine in. I was truly disappointed with Chef Ken Hom’s session and had hoped hard that Chef Johann Lafer won’t be of a similar letdown.

Chef Johann Lafer and me. 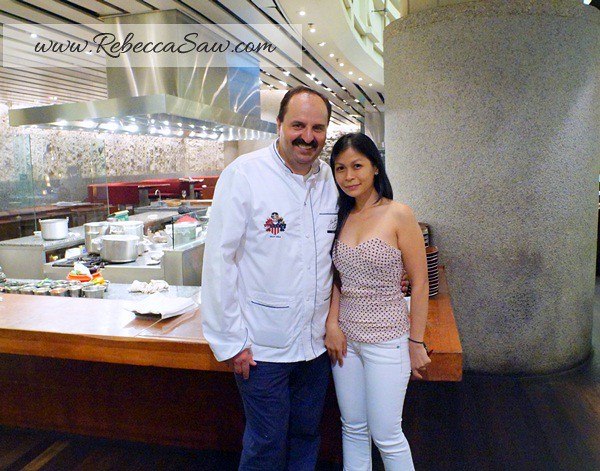 A little bit about Johann Lafer:

Johann Lafer is an Austrian chef residing in Germany. Just like Chef Ken Hom, he became well-known through his televised cooking show and his numerous cookbooks. When I met him, I even got a media bag with kitchen utensils of his brand! In Stromberg, he runs a restaurant and castle hotel. I have seen images of it online and it’s amazing!
He is also currently a lecturer in Food Sciences at the University of Fulda and in addition to all that, he runs Table d’Or, a cooking school which  receives up to 14,000 applications annually- from which about 800 are accepted. 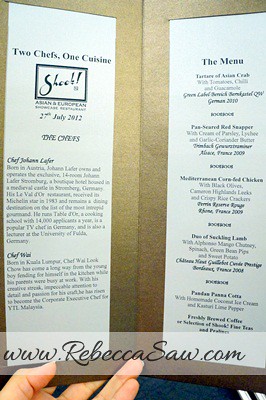 With a history spanning nearly a decade, the two first met in 2005 at YTL Hotels’ stunning Pangkor Laut Resort, where Chef Wai served as Executive Chef at Fisherman’s Cove, the resort’s fine dining seafood restaurant. Chef Lafer, recognizing potential in Chef Wai’s culinary skill and creativity, invited him to train at Le Val d’Or restaurant in his exclusive 14-room Johann Lafer Stromberg -a hotel housed in a medieval castle in Germany. Le Val d’Or received its Michelin Star in 1983, and remains a dining destination on the list of the most intrepid gourmands.

They have worked together since, with both chefs making regular trips to Malaysia and Germany.The two chefs have learnt from and influenced each other in the various ingredients and cooking techniques used in each other’s cultures- Chef Lafer adores the versatility and flavour of coconut and pandan leaves, while Chef Wai has found himself enamoured with white asparagus and traditional Bavarian black beer braises.
And thus, the dinner tonight

As dinner progressed, Chef Wai (second from left) was observed keeping an eye on the preparation of his dishes throughout the evening. 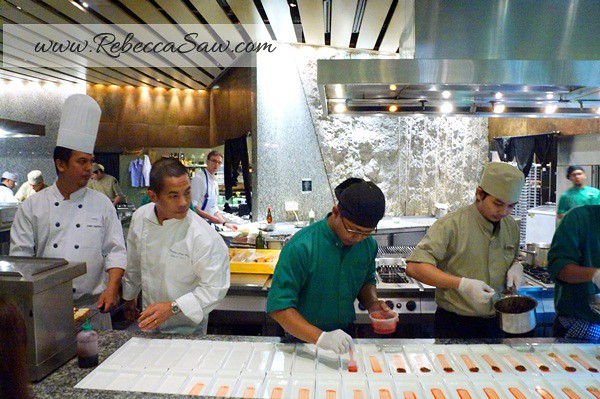 Likewise, Chef Johann (second from left) ensured consistent quality and presentation by cooking and plating the dishes himself with assistance from the Shook! kitchen crew. And thus there were none of the dumbfounding dismay of Chef Ken Hom’s dinner. All of the dishes served were thoroughly enjoyable. 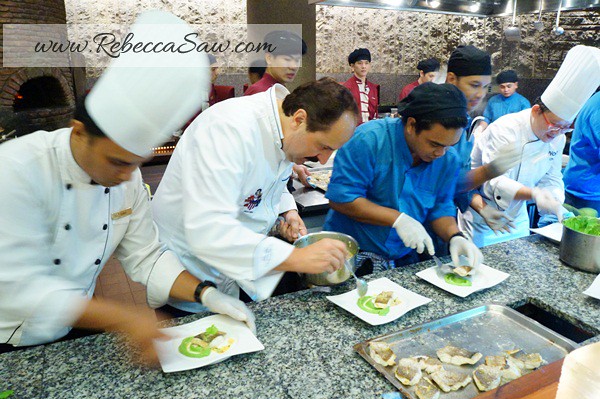 A little luscious orb of foie gras encrusted with pistachio bits signaled the start of dinner. 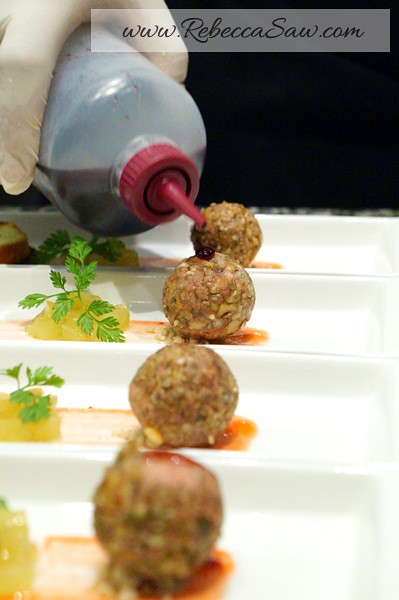 I couldn’t help spreading some over warm rolls, all the while mindful of my stomach space. There are 4 main courses to go before dessert, and if the amuse bouche is of a good indication, the rest of the meal looks set to be as excellent. 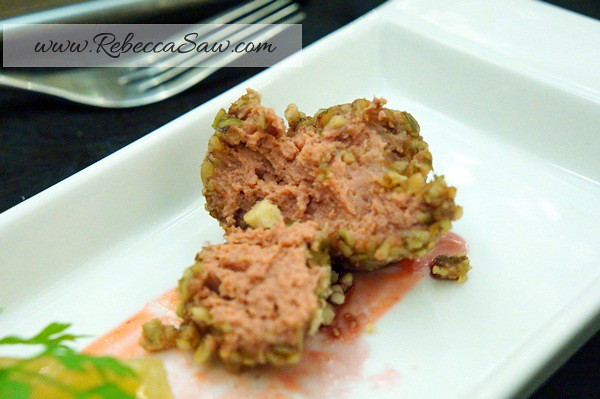 Cleansing our palate from the strong flavour of the foie gras earlier was a lovely of Tartare of Asian Crab with Tomatoes, Chilli & Guacamole. The preparation of crustacean with guacamole is not new, but one that sits on a low timbale of rice below is. Suddenly the whole ensemble resembles sushi. 🙂 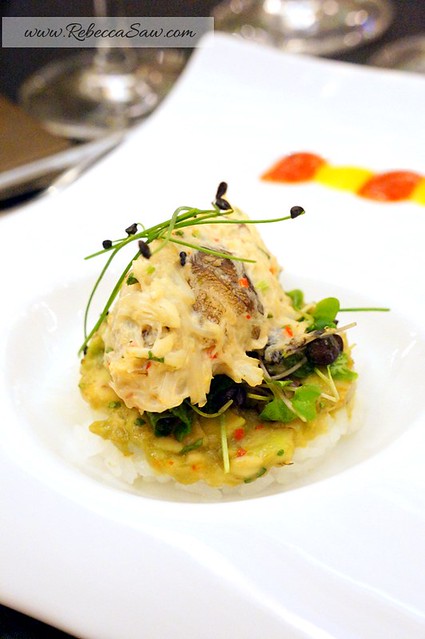 During a short chat with Chef Johann and Chef Wai just prior to dinner, we were told to expect a dinner menu that features an exquisite marrying of local ingredients with western cooking techniques. And from this very course onward we were beginning to see the pairing as promised. 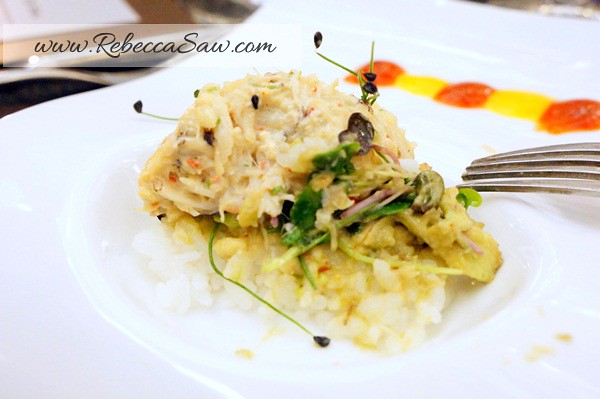 More oceanic flavours came our way in the form of the Pan Seared Red Snapper, wonderfully flaky as it rightfully should be and delicious with the creamy, sweet floral lychee and garlic coriander butter. 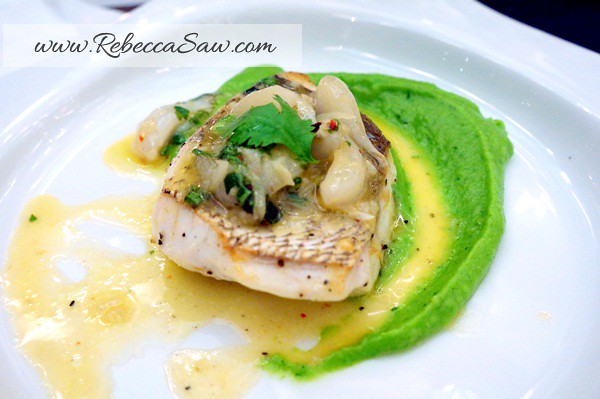 You can go wrong with the natural sweetness of fresh fish, but the lychee and garlic coriander butter made it more enjoyable due to its added contrasting flavours of sweet and pungent. 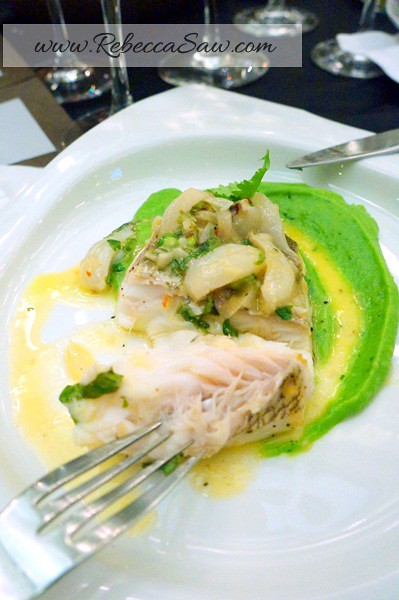 I must admit, after the tartare and the snapper, the chicken didn’t leave as much of an impression but rest assured it was good. Like I said earlier, I couldn’t really fault any dish served this particular evening! 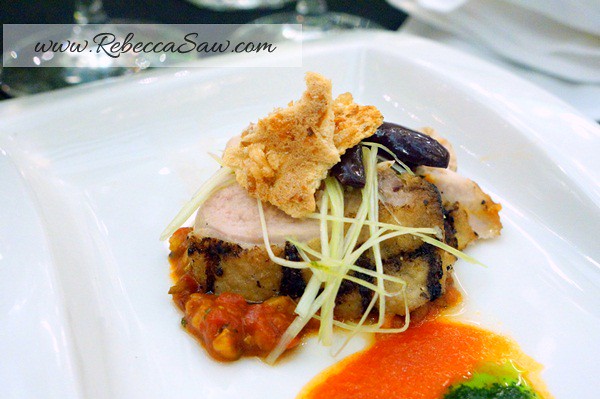 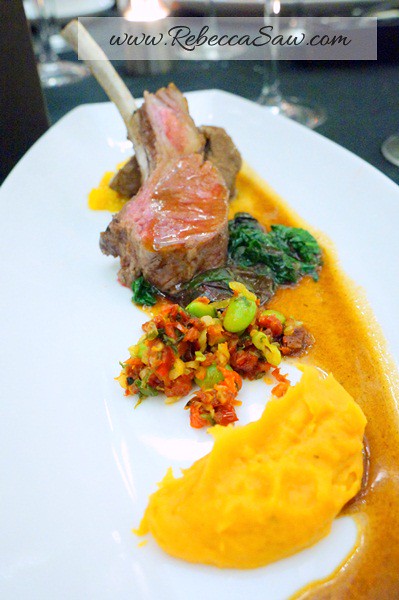 I relished every bite of the juicy, tender lamb and wiped the plate clean of every bit of mango chutney together with the smooth sweet potato. The green bean pips was alike a “sambal” edamame salad; slightly spicy and nicely elevated the overall flavors of the dish. The sweet potatoes make up for the carbs on the plate and it was faultless in both taste and texture/consistency. 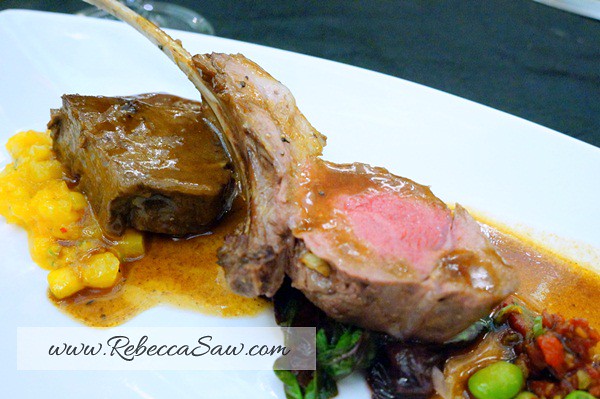 Each course was complemented with a German or French wine, selected to bring out the best flavour components of each dish. 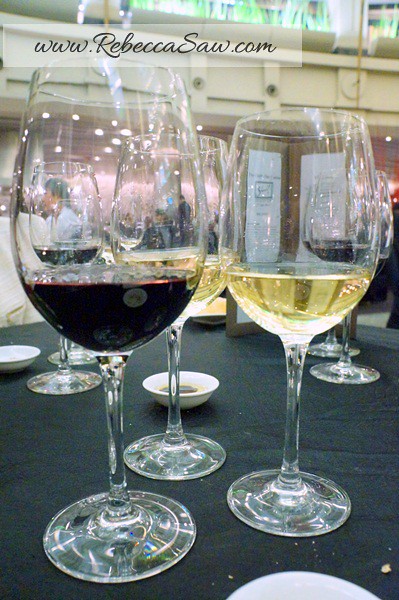 Last but not least was dessert; Pandan Panna Cotta with Coconut ice cream – very local indeed and interesting use of our local ingredient. It turned out tasting like our humble “tau fu fa” albeit pandan flavoured. However, I must say I took only a bite, as I was preoccupied going around taking pictures with dear Siobhan of YTL, Chef Johann as well as with Chef Darrel of Intercontinental Hotel KL. It was good to see Chef Paul of The Food Studio, Amarin Mt Kiara again too! 😀 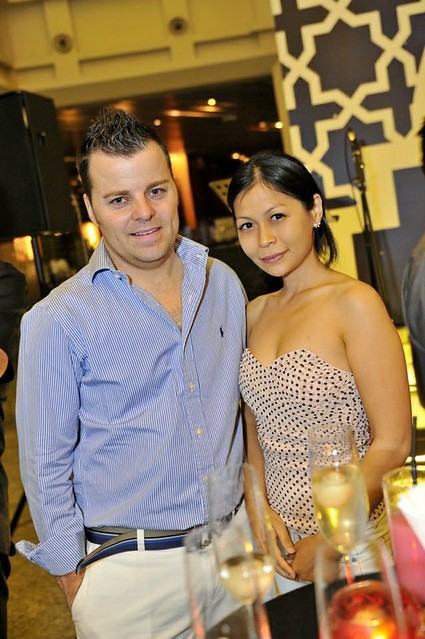 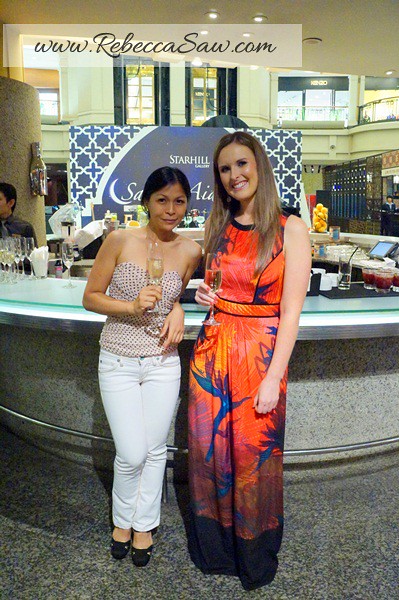 And so I wait with bated breath, wondering what surprises would YTL and Shook! Starhill Gallery would spring on us for the Midsummer Nights Feast 2013. Who would be the invited chefs this time?? 🙂