I have steaks almost every week, usually chilled Australian beef bought from AEON, seasoned lightly with salt and pepper followed by a few minutes each side on a hot pan.
It is simple, inexpensive at about RM32 – RM40/kg and I usually go for a 250g portion per meal.
Cooking my own steaks/beef certainly saves me time, effort and money paying for a similar sized steak at a F & B establishment.

But when I heard of Bruno’s reputation of serving good steaks (sous vide!) at incredibly prudent prices at Hartamas I was instantly intrigued.
Now this is something I should share with my readers and friends; I had thought.

Most of my friends tell me that they can’t cook and would rather pay for a steak. And if possible, could I recommend one that won’t cost them an arm or a leg (places like Prime comes into mind)?

So here I am, in the name of research, sitting in the middle of an empty land staring at this fella who I’ve read was a banker turned chef and had chose to man a compact stall that stands out-of-place in the middle of the busy Hartamas area, instead of donning corporate suits and slaving in an air-conditioned office. 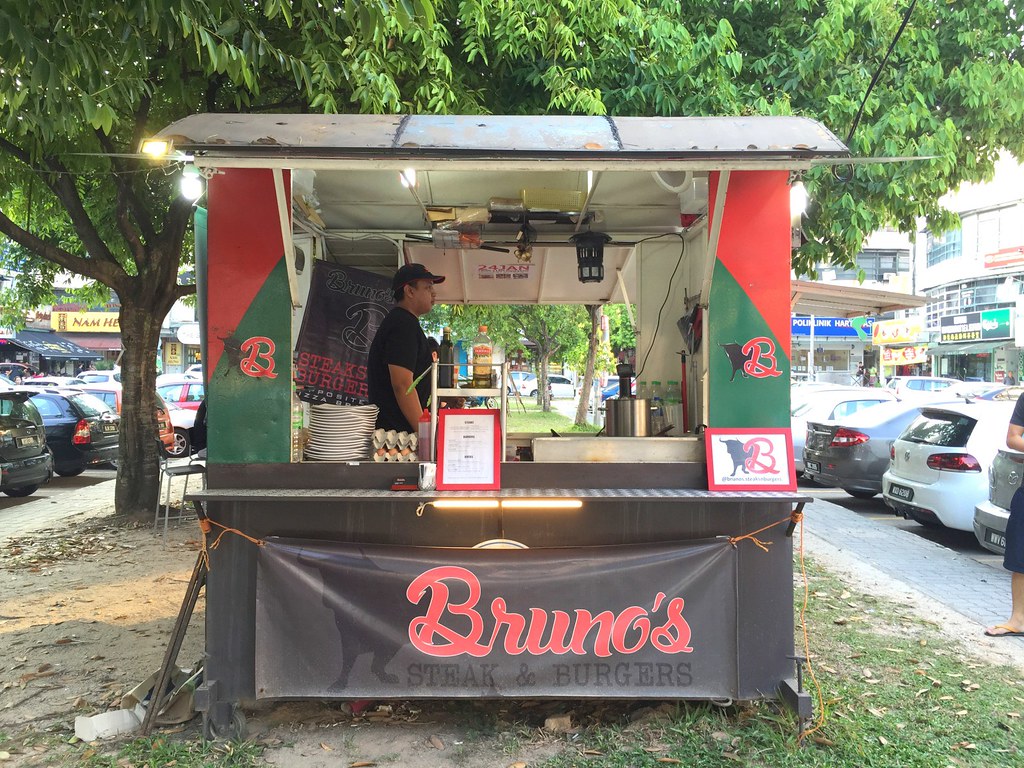 Bruno’s menu is simple and short.
For steaks he has Australian or Brazilian beef. Rib eye or T-Bone.
We called in advance to be sure he’s going to be open (I hate wasting time) and he advised us to pre-book our beef.
So I chose a rib eye and a 400g T-Bone.

Arriving early, we sat comfortably under the trees and watched as he busied himself serving a large group that arrived before us. His sous vide machine and packs of beef were in plain sight.

He told us we could buy any drinks we want to accompany our meal, and so we did, some beers and fruit juices from the shops nearby.

After inquiring for our preferred level of doneness, he went to focus on our orders.

Since the steaks were sous-vided, it was a matter of minutes before our orders are ready. It is self-service here so once your dish is done he will call you to walk over to get it from his stall.
Proper cutleries are provided and each dish are very no-frills; some greens at the side, an orb of buttery mash and a squeeze of mustard.
Not a man for aesthetics but who cares really, when the steaks are good? 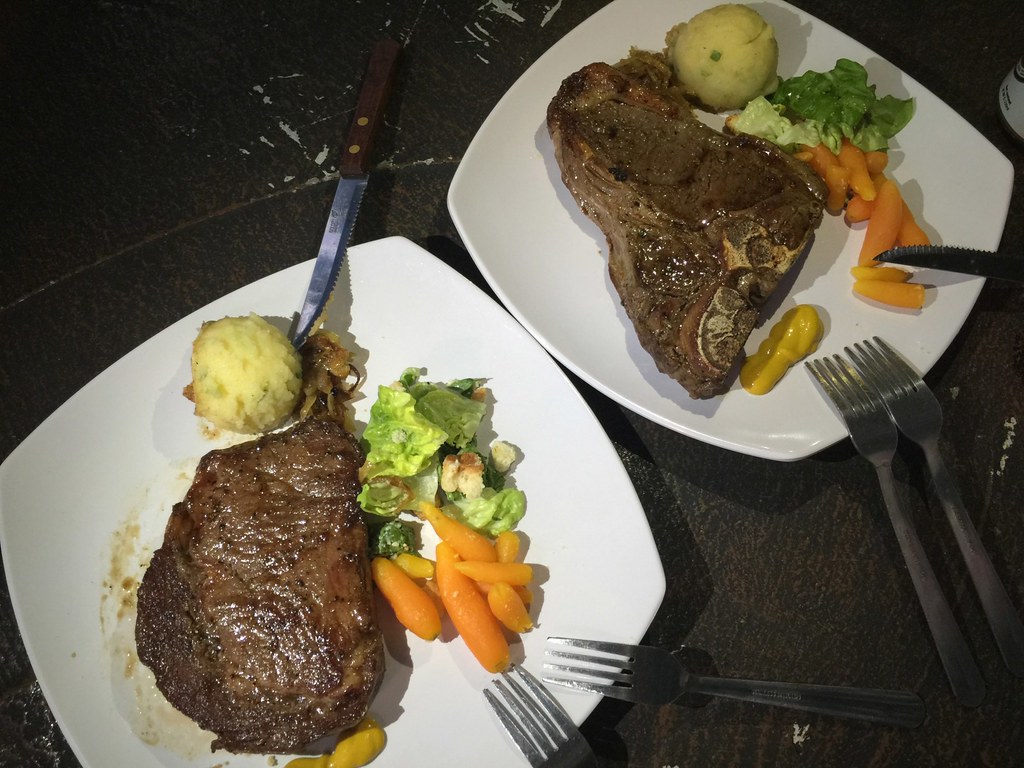 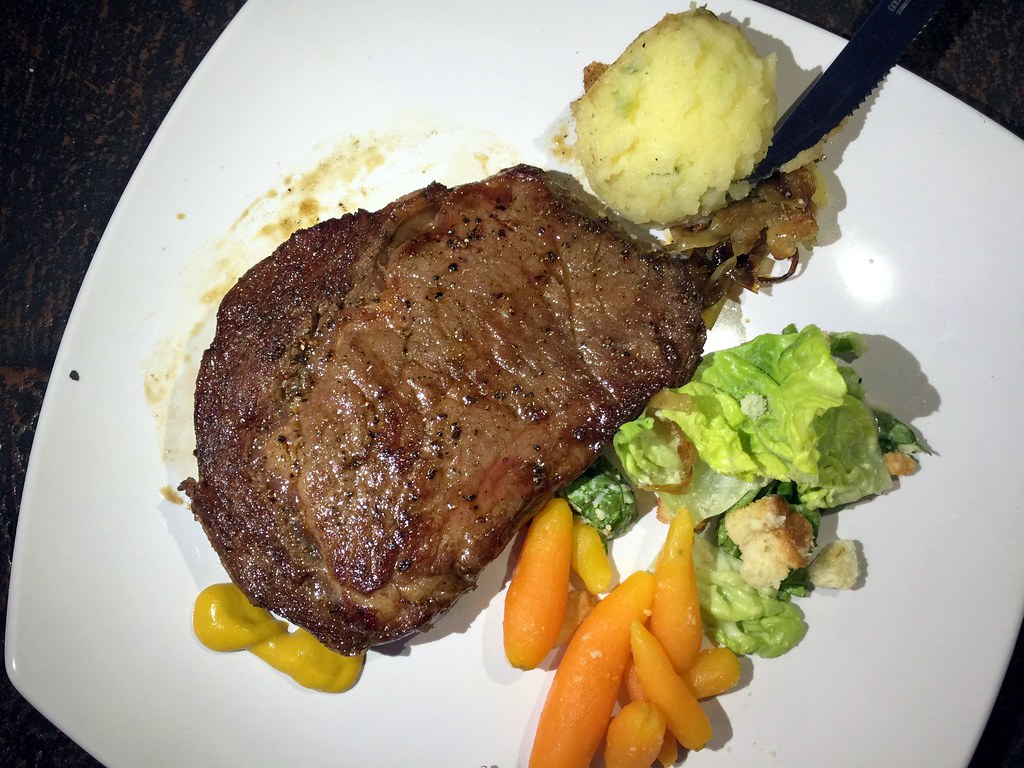 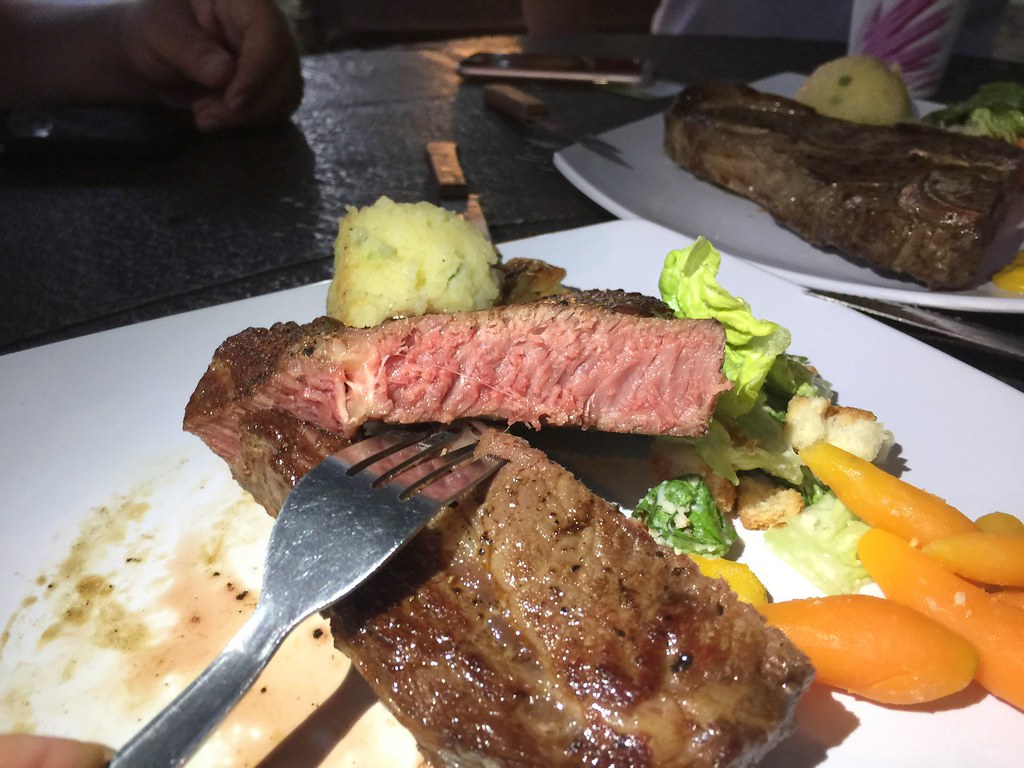 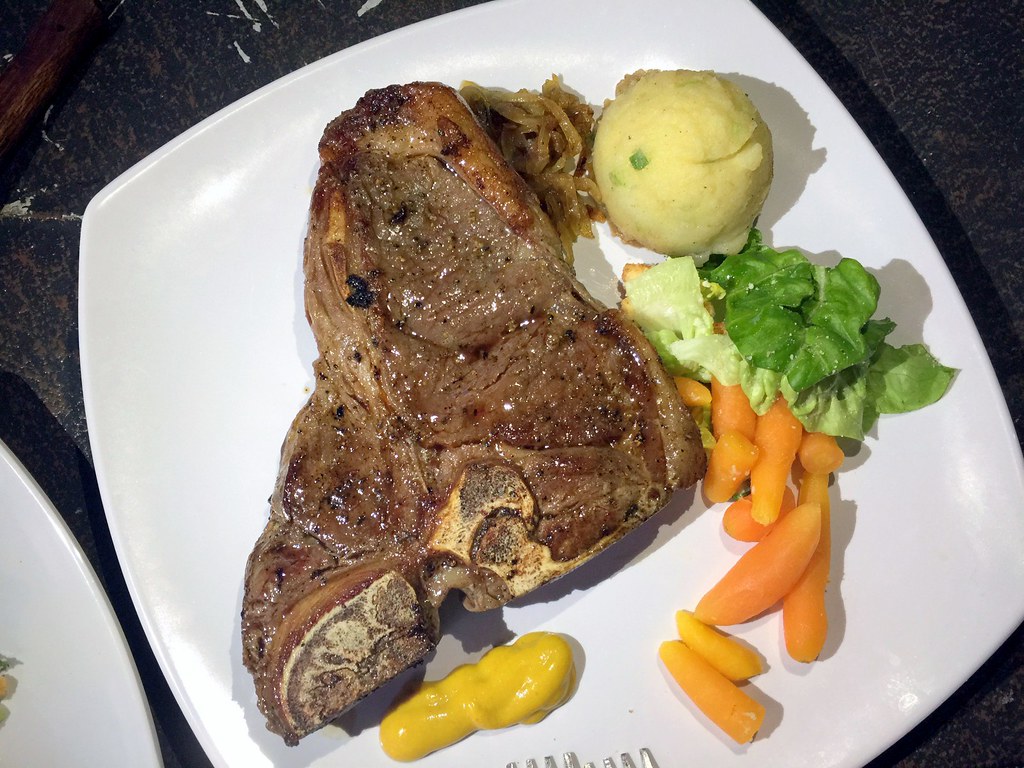 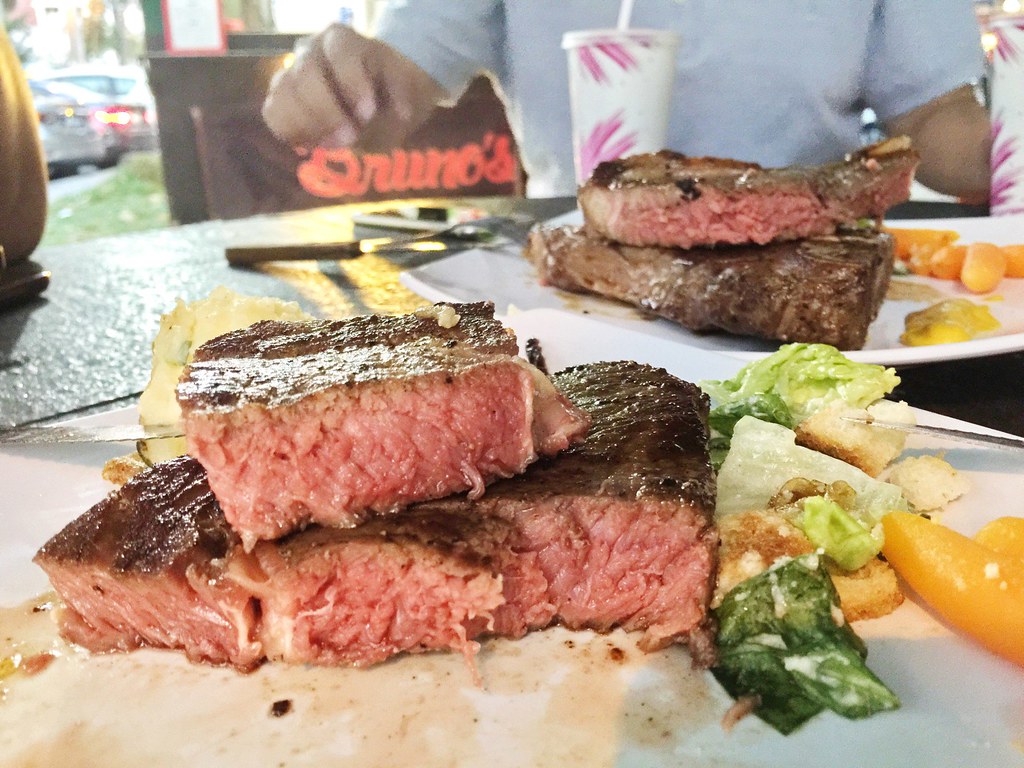 Last but not least, I could never resist a burger so I opted for the most basic version – Bruno’s ‘Gangster’ (RM10.90) which comes with a 125-gram sous vide Aussie beef patty with cheese & egg on a sweet bun. 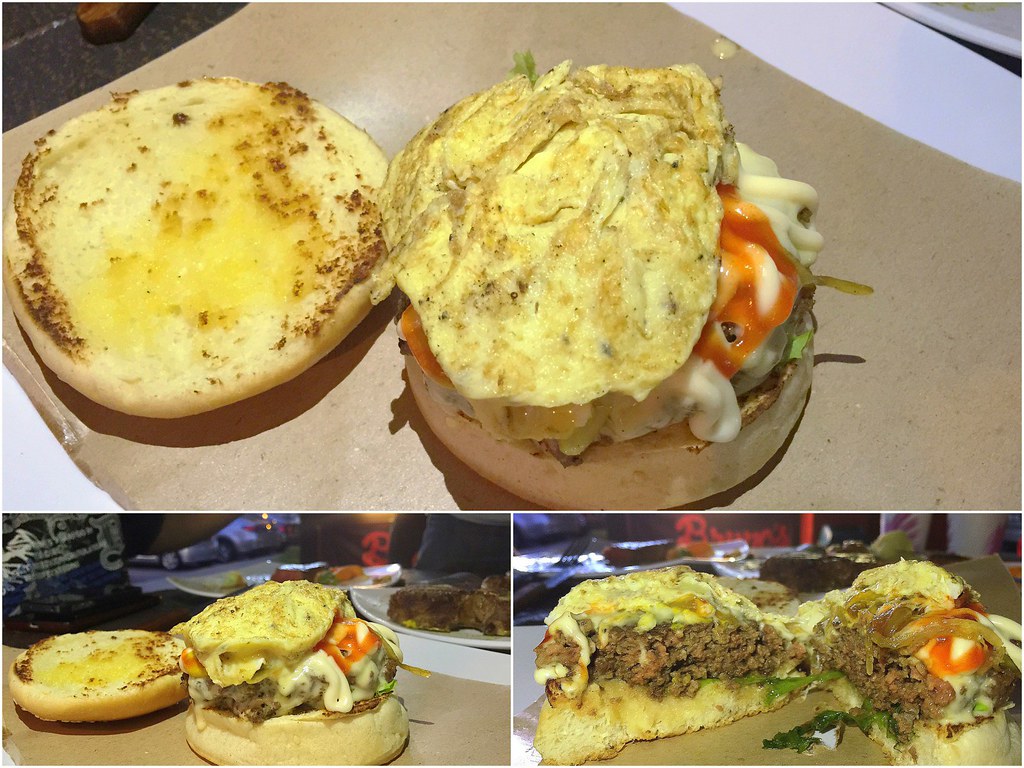 I’m afraid by the time the burger was served it was nearing dark and not much could be done to salvage these photos of the burger.
However just take my word for it that it is a good burger for RM11!

RM11! For Australian beef patty with egg and a slice of cheese.
All 4 of us encountered parts of the patty that are either very salty and parts that are just nicely seasoned. I guess it was just non-even distribution of salt within the patty.
However overall it is still a decent burger and if I could change anything about it, I’ll request for no mayonnaise. At parts the mayo annoyingly overwhelmed any flavours of the meat.

As for the rib eye, it was just slightly too chewy (though it was pink) while the T-Bone was delicious. I would definitely recommend the T-Bone over the rib eye. So for those of you who are always on the lookout for a reasonably priced good steak (RM30 – 50 for 200 – 300g), I have a few suggestions for you. One is Skonhs Canteen in Damansara Perdana.
Second is The Manzo Project (by espressolab) – link –> The Manzo Project steaks.
Now I’ll add another to the list, and it happened to be the best of the 3; Bruno’s.