I get it. A lot of you adore Big Hug burgers. And I totally respect that.
I have stated what I didn’t like about the burgers in my first post and I had mentioned that I would go back to try it again. I had not planned for it to be so soon as I believe the kitchen would require time to come up with new recipes or tweaks if any, but with the whole thing blowing out of proportion (as you can see from the comments here) and having the owner Aidelle Pang graciously inviting me via my FB page to her outlet again, it’s only right that I step in to dine ASAP at Big Hug Burger.

My week was packed with events and reviews so I wasn’t available on that Friday which she had extended the invitation. I went on Monday instead, canceling a food review at a hotel since there are no other nights that I’ll be available.

For consistency I went with the same people that had accompanied me during my 1st and 2nd visit. I also had Rainier along, a chef working in Singapore and experienced in the hot kitchen of Cilantro, Jaan, Robuchon (just to name a few) as he’s in town for a break.
Later in the evening my adopted big brother dropped in, curious with all the hoohaa and also a well-traveled foodie. All in all, we were a little party of foodies ready to eat some burgers! 🙂 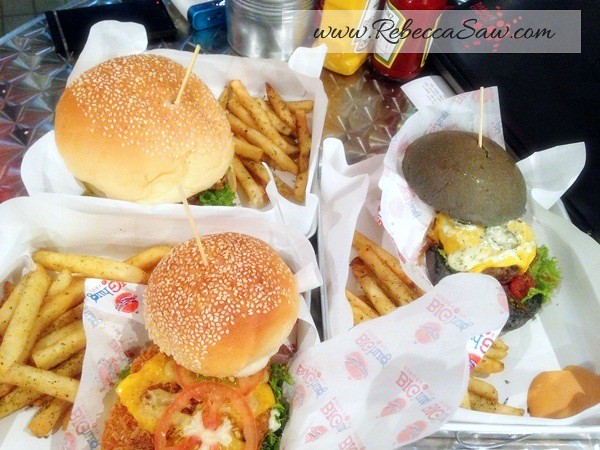 My visit was without her knowledge of me dropping in. The reason is simple, I want my burgers served just like how it would be for any walk-in customers and I didn’t want any preferential treatment (I’m just assuming here, I’m not implying there will be).
All in all, a fair taste test.

I didn’t have to avoid Aidelle, as she would recognise me anyways. As an extra precautionary step, Rainier went ahead to order the burgers, and myself and KC only stepped in after the burgers were served.

Aidelle came by soon after I was seated, while we were busy taking our pictures.

As everyone had said she is, Aidelle is a package of warmth hospitality and cheer. She apologized for the “drama” on the blogpost, but said that she’s been extremely busy so she hasn’t really read it.
Oh dear Big Hug fans, she hasn’t really read this post, so don’t worry, she’s not losing any sleep over it. Whew, I’m glad! 🙂

She continued by requesting for our feedback and to let her know if we need anything else (food-wise). We thanked her graciously and replied that we would need time to tuck into the burgers, and would definitely give her due feedback. Then she went back to her cash register.

One long fry was the first into my mouth.
The first thing that hit me was “it needs some salt”. I dipped it into the sauce that came with the fries and find that it helped a little for taste, but I stand by my first post that it was too mayo-ish.
I’m aware that the common base for sauces are mayo, but what I’m trying to say is, the sauce didn’t stand out for one that is made in house and it leaned towards the taste of generic mayo.
Rainier dipped his finger into the sauce and pronounced it “cocktail sauce”.

Picture below: Fries and the sauce at the side. This is the lamb set. 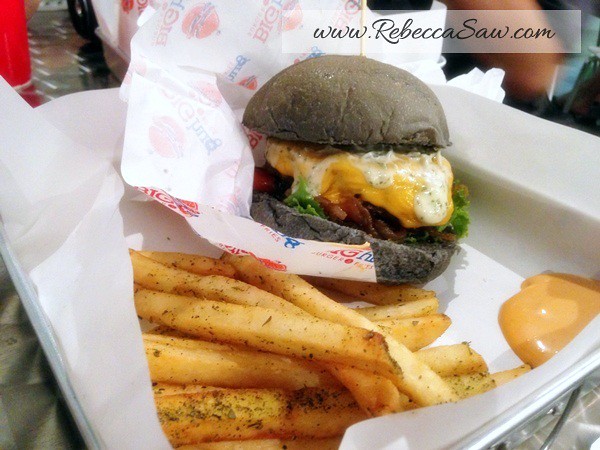 Now, the lamb burger.
The onions were similar to my first visit and try as I may, I didn’t like them. These are not caramelized onions and Rainier concurred.
He cooks caramelized onions everyday in the french kitchen of a restaurant in Singapore and many times over the course of his career and he absolutely certain of his verdict.
But let’s not nitpick here. I’m sure there are those who loved them, so please, do enjoy those Netherlands onions. 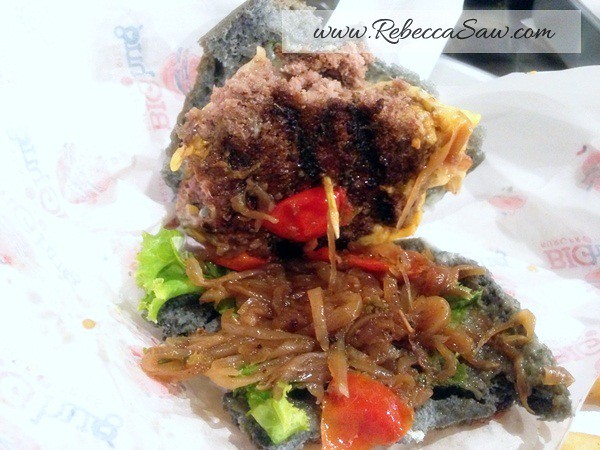 The patty itself was a tad on the dry side for us. All the buns that came with our burgers were nice and fluffy though. I certainly did enjoyed the buns this time. 🙂

The Big Hug burger was next. The same bland tomatoes and sweet, crunchy pineapples. The chicken was alright in taste and this time, it wasn’t so heavily battered. The “curry/cheese” sauce was another debate, but do read on for Aidelle’s explanation. 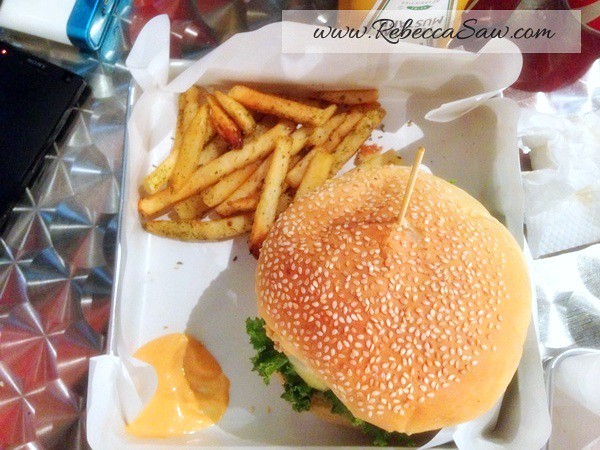 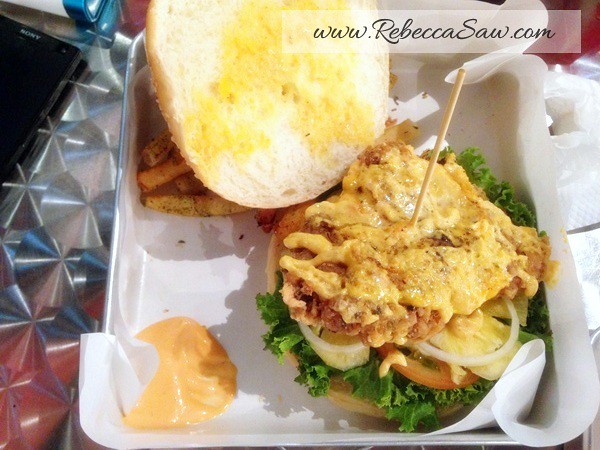 A bite into our favourite (KC & I favoured it when we had it the first round and I have mentioned that in my post) Crispy Fish revealed a wetter fillet, which we deduced could be from the thawing process. It wasn’t nicely flaky and had more moisture within than as it should have. 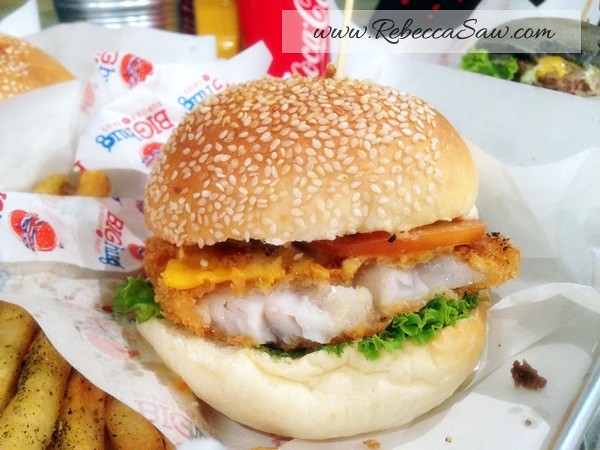 I had wanted to try the same 5 burgers I tried earlier, but the salmon ran out so we didn’t get to try that.

Halfway through the burgers, we were ready to speak to Aidelle. She came over and we sat together to discuss what we thought.
Below are her point of view:
1. Fries – her customers prefers them without salt and would enjoy them as it is or with the ketchup/sauce provided. She is trying to educate her customers on healthier eating and reduced sodium is one of them.
2. The lamb patty is not medium rare or pink as her customers preferred it this way.
3. The onions were such because her customers loved a bite to their onions, versus the completely soft (some may even say mushy) texture of caramelized onions. She said some even asked for extras.

4. Big Hug Burger greens are sourced from an organic farm in Cameron Highlands. And the tomatoes were bland because organic produce (greens) are generally not sweet/tasteless (I swear I’m typing this word for word).
The tomatoes I’m refering to here is the fresh ones in the Big Hug Burger and the Crispy Fish Burger. 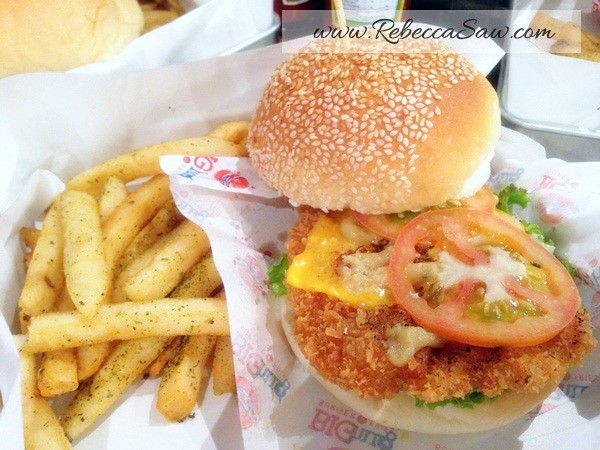 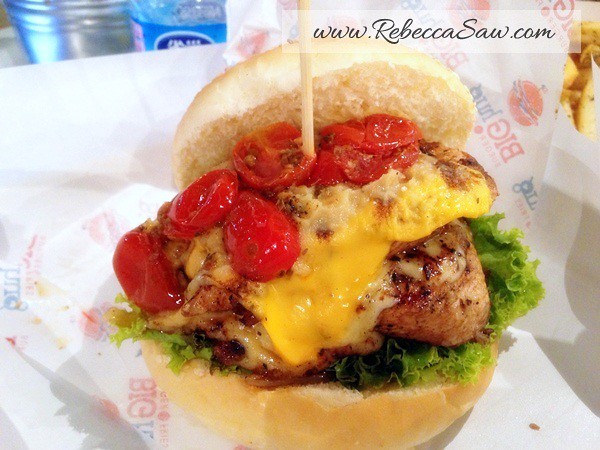 5. Chicken thigh is used in the Big Hug Burger and each serving is between 190- 220g. So if it’s more batter (like I had in my previous visit) it is still within that weight range so every customer gets the same portion.
This round, I definitely had a nice piece of deep-fried chicken without excessive batter. Thumbs up for that.
6. For the debate of the curry or cheese sauce on the Big Hug Burger, Aidelle said it’s cheese sauce for sure and Cheddar was used. Myself and Rainier thought differently as cheddar would have a stronger taste and the consistency wouldn’t be as runny.
But heck, it’s one sauce on one burger. We will leave it as that.

My big brother came in just then and I ordered a lamb burger and a Mario Grilled Chicken Burger for him. Being a first-timer, he said the lamb burger wasn’t bad, and in fact, found his to be moist and juicy!
Rainier, myself and KC sampled some and realized that this one is much better than the earlier one we had. I guess there were slight inconsistencies by the kitchen team.

As for the Mario, there were copious amount of the mushrooms that I didn’t like, and my earlier suspicions that these were dried mushrooms were confirmed to be correct. 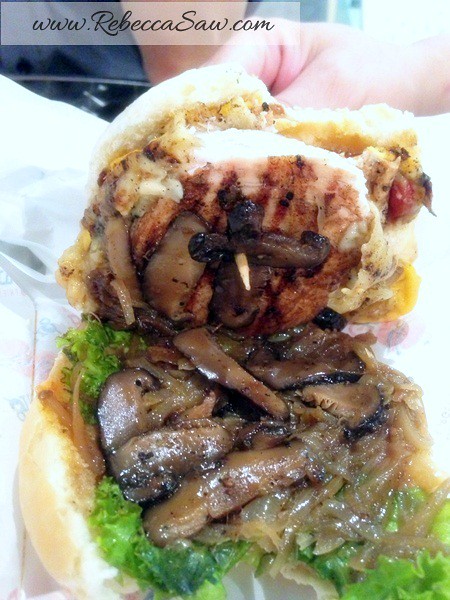 Aidelle said the mushrooms are imported from Japan, soaked and washed before its cooked and added into the burgers. I’m sorry but I really can’t develop a fondness for these. Not in American styled burgers anyways.
Being the dried type, it was slightly gelatinous (just like those black mushrooms you get in your claypot rice, chinese stir fry, etc) and totally wrecked the taste profile of the burger.
**I must emphasize again – these are imported from Japan. My earlier reference to the chinese mushrooms was just a matter of reference.
And again, if you enjoyed these, I have nothing against you. But please, let me love my mushrooms (the other kinds) on my burgers.

We did find the chicken breast meat a bit dry as well. But we might be nitpicking. 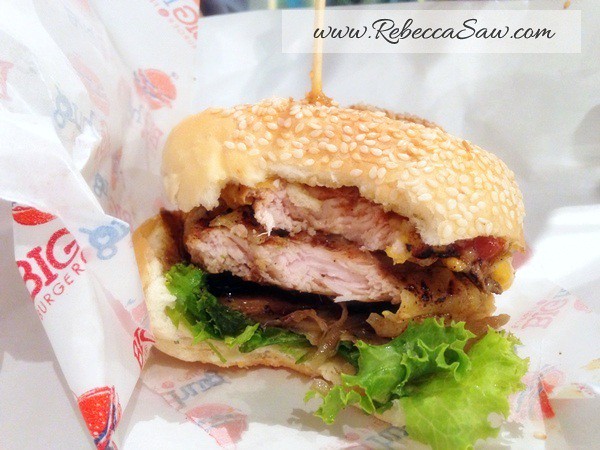 All in all, we did feedback to Aidelle about on our thoughts. I must say she took them well, and replied with reasons why the kitchen prepares the food as such (the same reasons I’ve listed as above).
After all, you can’t please the tastebud of everybody and if what you have currently going works, then perhaps that’s the best for now.
Anyhow Aidelle did say thank you to us for all our comments and our dinner was pretty much like any other diner’s experience in Big Hug Burger.

It’s good to have re-visited though like I said, the food still scores the same with me. Anyhow, having chatted with Aidelle and listened to her respond to our feedback, we understood better why it was prepared as such.
Whether I agree or otherwise it’s another matter. After all, all of us have our preferences.

Last but not least..

Now, let me tackle the vicious comments on my previous post.
But this post has gotten a bit too long. Since I have many screenshots, I’ll post them HERE. Trust me, you would want to read this.
https://www.rebeccasaw.com/final-big-hug-burger-ss15-subang-the-comments/