Acer has just launched their latest ultrabooks range today and as you might be aware, I was an Acer Aspire S3 user prior to this; even an  evangelist at the launch stage of Acer’s Ultrabooks campaign. 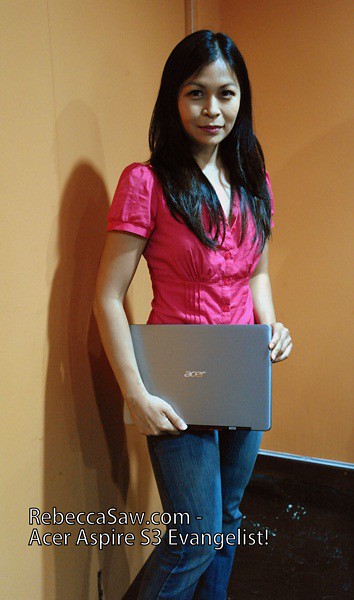 It was natural that I’m here today to witness the new Acer Aspire S5, and to note the enhancements of the S5 in comparison to the S3. 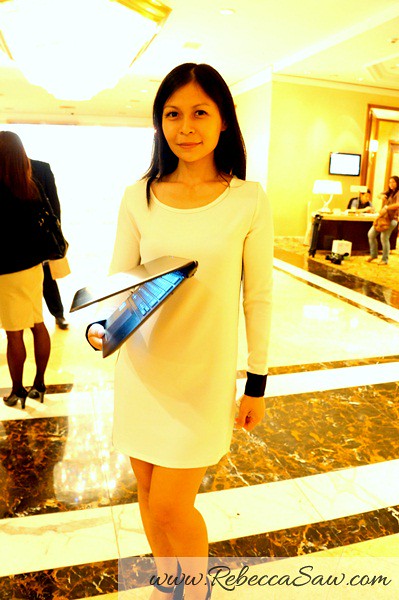 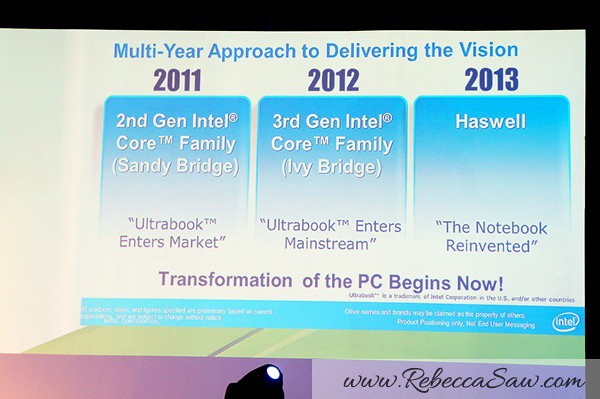 Here’s another chart to further explain the techicalities of it. 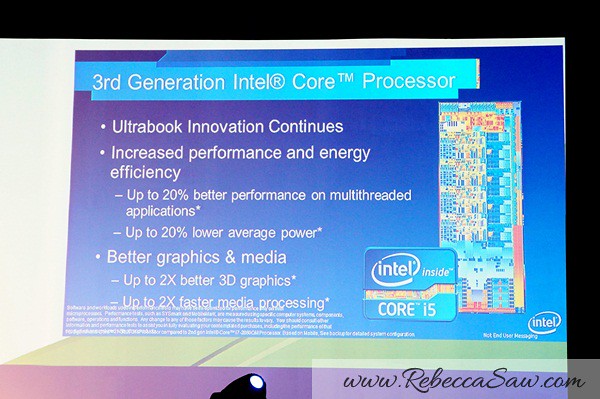 Ok, I’m just being cheeky. 😛
Basically the name is the same but it’s from a different generation and promises to deliver increased performance and energy efficiency.

Now, other than the processor there are general improvements to the Acer Aspire S5 as seen in the table below.

Let’s just say you get what you pay for.
It is a newer generation of processor after all and the SSD is much appreciated; as well as the Thunderbolt port and 2 USB 3.0.
Best of all, it’s lighter at 1.20kg vs the S3 at 1.35kg. You can view the Acer Aspire S3 specs HERE.

Previously I have whined consistently about the keypad on the Acer Aspire S3 and I have been pretty vocal about my complaint. Thus that was one of the first thing I tested out on the Aspire S5.

Below: The keypad on the Acer Aspire S5. 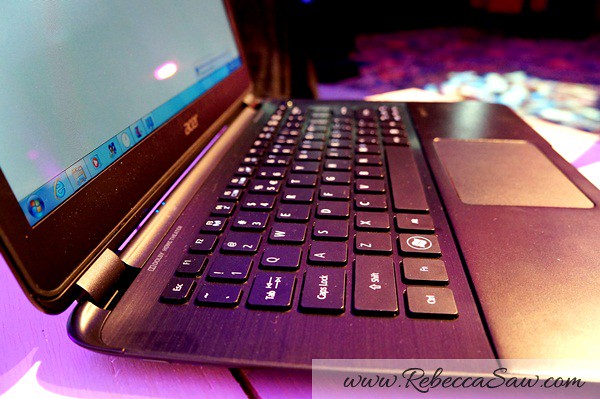 This keypad was certainly much better! Thank god! 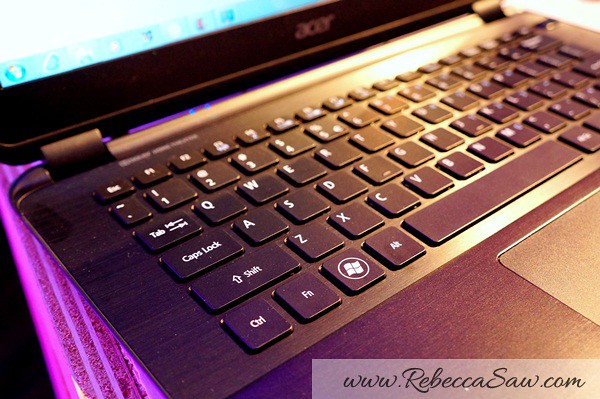 Other than that I loved the sleek matte-like body. That’s saying a lot coming from someone who likes ALL her gadgets WHITE. 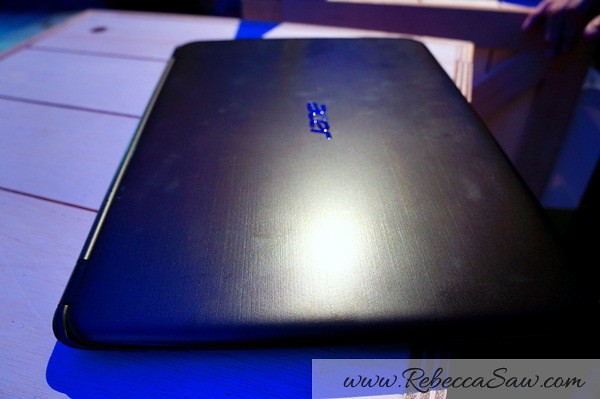 “The Acer Aspire S5 is the ultimate show of what the ideal ultrabook should be – razor-thin at 11mm and lightweight at 1.2kg, with superb user features tucked away in an impressive design for excellent mobility. The machine is super fast with Ultrafast Thunderbolt technology; and ultra-responsive with Acer Green Instant On technology for fast boot and resume, and Acer Instant Connect for multimedia and data management on all devices. We believe that the Acer Aspire S5 is the perfect ultrabook for those who require high productivity, seamless connectivity, multi-use functionalities to juggle work and play and beautiful design,” said Ricky Tan, General Manager of Acer Sales & Services Sdn. Bhd. 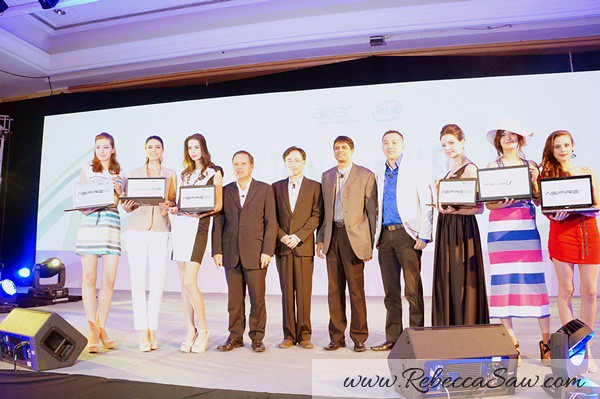 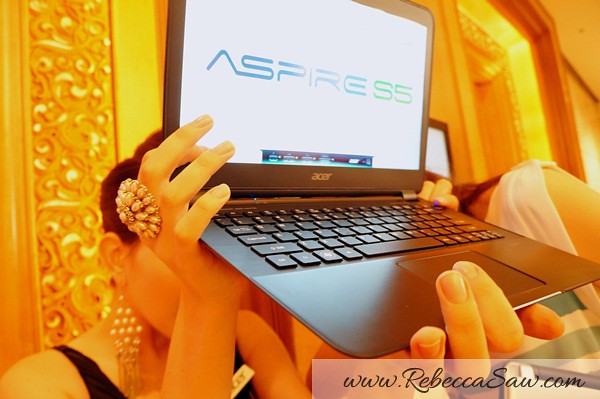 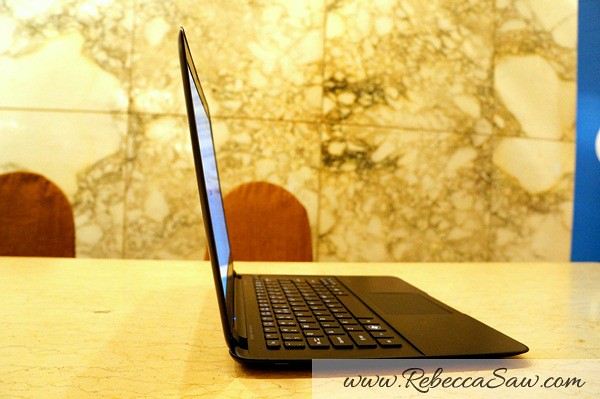 Here’s another cool feature of the Acer Aspire S5.
The Aspire S5 includes a high-speed Thunderbolt communications port and to accommodate this port, as well as others, Acer has equipped the Aspire S5 with “Magic Flip,” a quirky design feature.
By pressing a button, the chassis of the Aspire A5 moves  upward, and the I/O panel that was previously hidden within the body of the computer is exposed for usage.

Watch this video and you’ll know what I meant!

Ever since using the Acer S3, I have become a hardcore ultrabook fan and have not used any form of computing device since. I don’t even see the need for tablets; especially when an ultrabook is just as light and offers much more functionality. 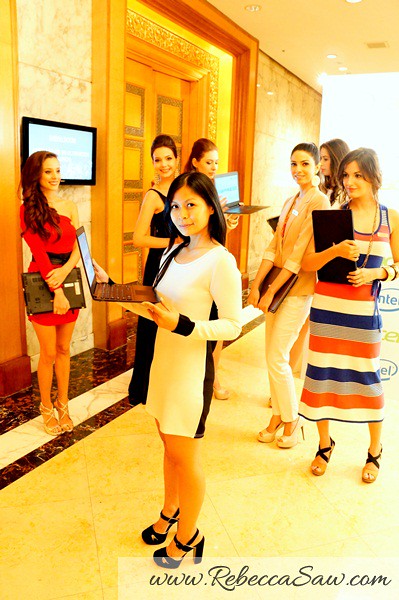 I have personally used the Toshiba Portege Z830, the Asus Zenbook and of course the Acer Aspire S3. Each boasts of their own individual positive and negative points. However, from my experience, the ultrabook (in general) has always been compared to the MacBook Air.

As a pretty influential blogger, I get pretty good responses to my tweets and FB updates. Naturally during the launch I tweeted about the Acer Aspire S5 and updated a FB status.
The subsequent remarks and responses clearly shows the “general public” sentiments about ultrabooks. Obviously this does not serve to reflect the opinion of the whole country, but you get the drift. 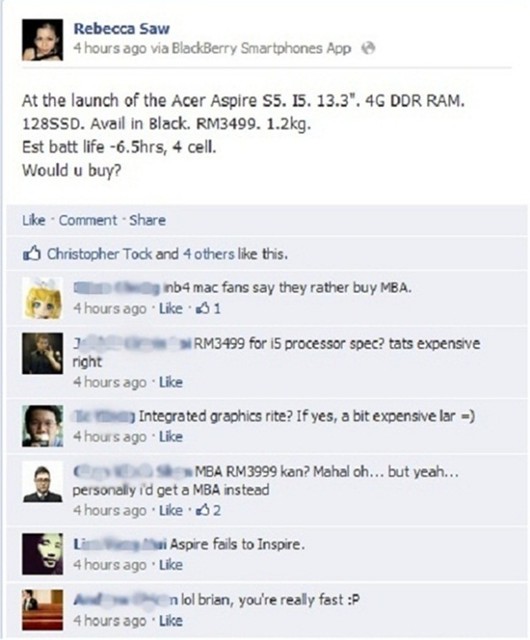 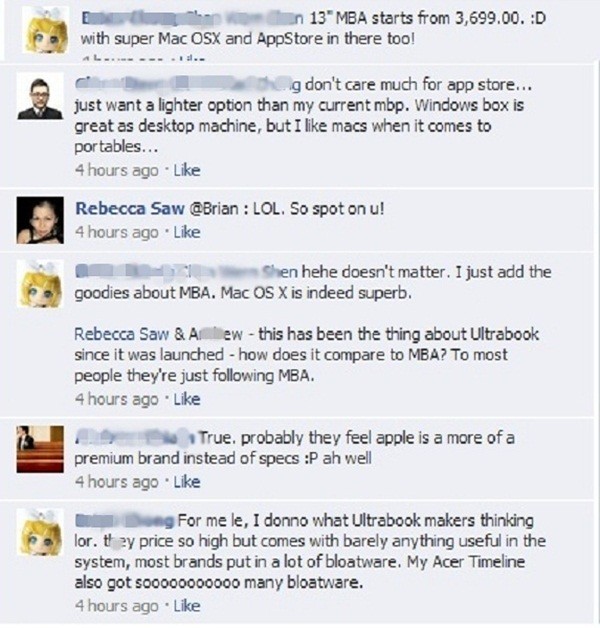 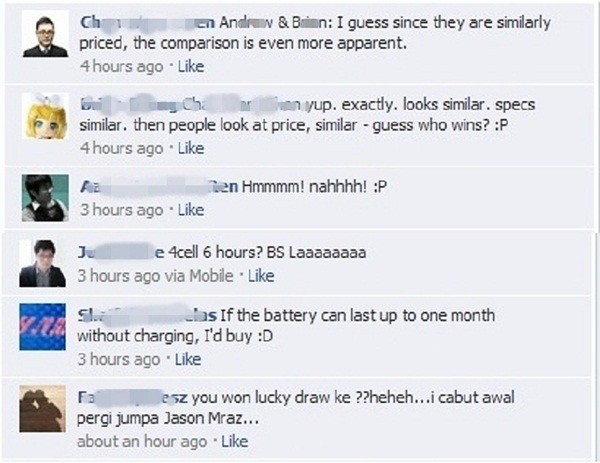 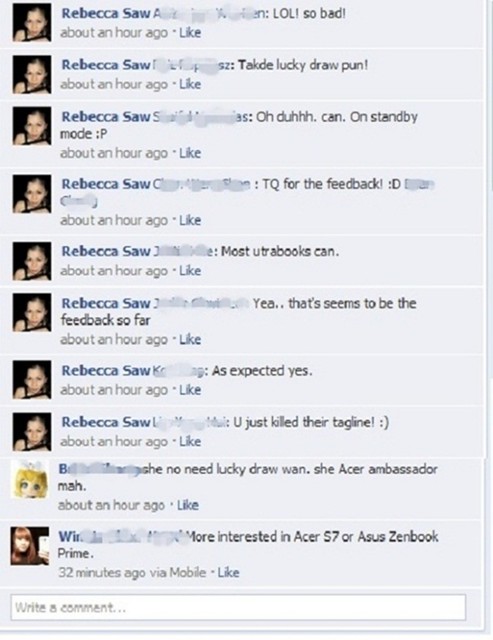 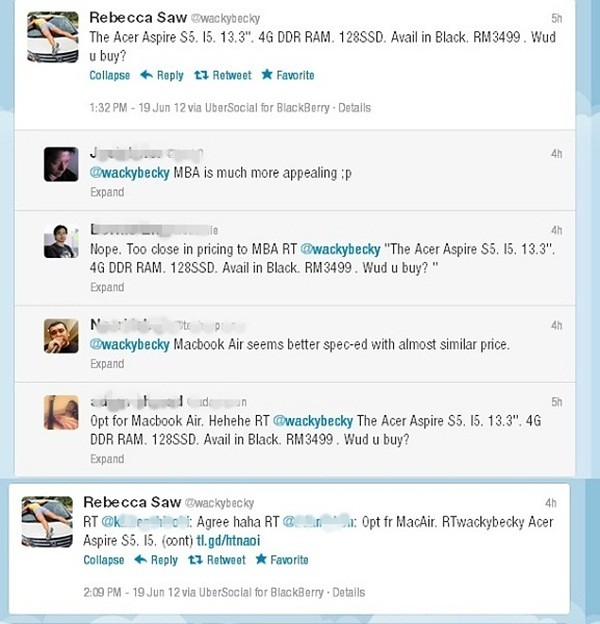 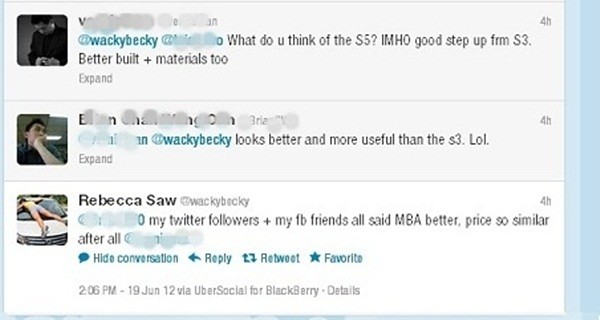 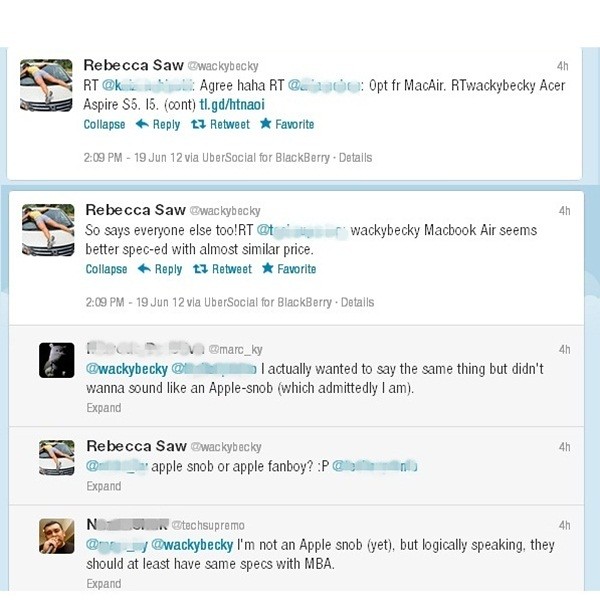 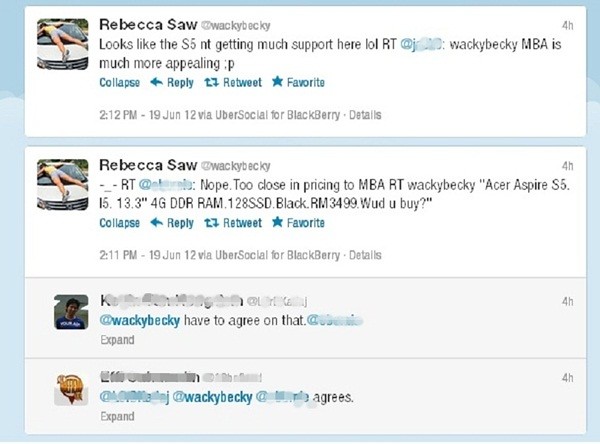