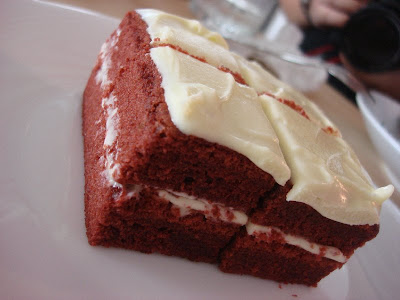 A break from all things savoury, I thought to introduce to you a new cupcake-tery in town. Ok, not literally “in town”, for the outlet is located in Putra Heights, Subang (* yeah..can visualise all of you going.. “where???” *), but fret-not, they have got a website, (with a map!) a blog, a stall in Subang Parade every weekend, on the 1st floor selling their delectable creations. Even better, they do deliveries as well, with certain terms and conditions, of course. 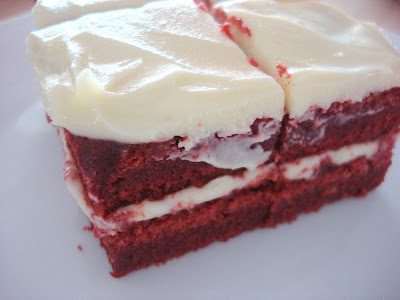 Pictured above is their signature, the Velvet Cake, with the drool+mention-worthy smoothest cream cheese layers ever, unlike the gummy or sugary plaster, thick sticky type commonly encountered.

Served slightly warm, the taste was somewhat complex, for it was my virginal experience with the red velvet. The moist, velvety-red sponge layers was rich, and slightly dense in composition, with very strong buttery aroma.
The layers were in harmony with the alluringly rich fluff of soft cream-cheese, made from imported cheese and mixed in-house. Mr Filen, the Manager proudly pro-claimed that they have the best cream cheese frosting, of which moi here sees no reason to dispute.

After much research in the internet, I realized Red Velvet Cakes are indeed rich, for one of its main ingredient is buttermilk, which explains the luxuriant flavour. When queried about the beetroot/colouring or whether cocoa was added, Mr Filen merely shared that it is a blend of their secret recipe.
It was difficult for me to pin-point on whether cocoa was added, as the taste was very subtle. My guess? I would say there was.

Overall, I liked the fact that their cakes and cupcakes was not too sweet, striking a very good balance between richness and taste.

I was reminded too, of the Get Cheesy Workshop featured by thestar & also by one of my favourite mag Flavours, by Catherine Lau a few months back. That was the first time I have heard of this cake.
One of the recipes she shared was the Red Velvet Cheesecake. (No, I didn’t managed to attend the workshop, was unavailable on both weekends..*regret* )

For those whose curiosity is piqued and would like to attempt this, below is the recipe shared by Catherine Lau. Don’t thank me; just save a piece for me when you bake it and I’ll be there to collect!!! ;p

Preheat oven to 180°C. Grease, line with parchment, and grease again 3 round 25×2.5cm (10”x1”) cake pans.
To prepare beetroot sponge: Sift the flour, cocoa powder, baking powder and salt together. Whisk the eggs and sugar with an electric mixer until the mixture is thick and creamy, slowly adding the warm oil, vanilla and beetroot juice. Add the flour mixture and mix on low speed, alternating with the buttermilk or milk-and-lemon juice mixture in three batches. Scrape the sides of the bowl during mixing so that mixture is well-combined.

Mix bicarbonate of soda and vinegar in a small bowl, then add to the mixture with the mixer on low speed for 1 minute. Divide the cake mixture evenly among the baking pans and place in the oven. Reduce the temperature to 160°C and bake for 15 minutes until cooked. Remove from the oven and allow to cool in the pans for 20 minutes; remove and cool cakes completely. Slice the top crust off to level (if necessary), and trim about 1cm around the edge (so that it will leave a gap round the pan when assembled into the 25x8cm or 10×3” pan).
To prepare cream cheese filling: Whisk the whipping cream and icing sugar in an electric mixer until soft peaks form. Place in a bowl, cover and refrigerate.

Beat cream cheese on medium speed until light and creamy. Add icing sugar and vanilla and beat until combined. Add the gelatine mixture, then fold in the whipped cream and the Irish cream or rum. Divide into three equal portions.

Repeat with the third layer of sponge, spreading the remaining cheese mixture over the cake evenly and down the side using a spatula. Cover and refrigerate overnight.

Remove cake from the refrigerator and set aside for about 10 minutes before loosening the pan; remove pan.

More salivating inducing PICS & review of their cupcakes and other creations coming up later this week..

Some excerpts I got from my online research to share with you guys..

A Red velvet cake is a type of rich and sweet cake, with a distinctive dark red to bright red or red-brown color. Common ingredients include buttermilk, butter, flour, cocoa powder, and often either beets, or red food coloring. It is most popular in the Southern United States, though known in other regions. The most typical frosting for a red velvet cake is a butter roux icing also known as a cooked flour frosting. Cream cheese buttercream frostings are also popular.

Traditionalists believe that red velvet cakes must contain cocoa, although recipes are available that do not contain any chocolate flavoring.
The best were moist and tender, not too sweet, like yellow cake with an extra wink of flavor. The winning cakes and cupcakes did not taste strongly of chocolate, an essential ingredient, some say, in the classic version of the cake. But cocoa had a noticeable presence in them.